Drew: Back when I was a teen, I used to fight with my parents about everything. It’s embarrassing to think about now, but at the time, nothing in the world seemed fair to me. It didn’t matter how petty it was — from mowing the lawn to cleaning up my room — everything was worth the fight, though none of it ultimately mattered that much to anyone involved. The Turtles decidedly do not fall into that pattern — their loyalty to Splinter is admirable, if a bit unusual from a bunch of teenagers — but issue 38 finds them disagreeing about big decisions that effect all of them. It’s a classic turtles story that we’ve seen time and time again with one important change: this time, the dissenting brother isn’t Raph.

Spoiler Alert: it’s Donnie. It’s a very smart choice from the writing team of Kevin Eastman, Bobby Curnow, and Tom Waltz (with Waltz credited with scripting the issue) — if Donnie is disagreeing over tactics, we know there must be some deep logical flaws in what Splinter is dictating. It’s easy to see why: Shredder’s grab for New York is small potatoes compared to the global threat Krang’s Technodrome will pose. In Donnie’s mind, waiting even one moment to strike against Krang could spell global annihilation, but Splinter counters by pointing out that they can’t save anyone if Shredder has killed the Turtles. Waltz plays the argument very even-handedly, managing to avoid coming down on either side to heavily. Instead, we’re left with the strength of those arguments and our respect for Splinter’s wisdom and Donnie’s intelligence to leave us unsure of the right decision.

Of course, part of what makes the argument so serious is that Donnie isn’t just being logical. 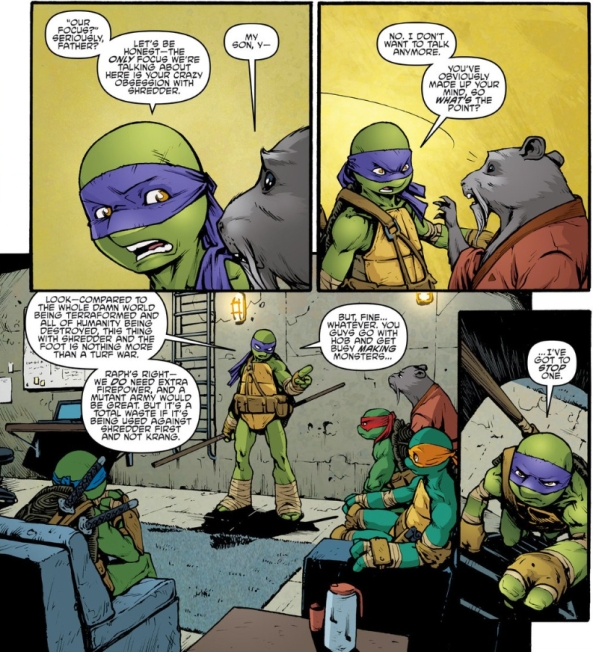 It feels surprisingly unlike Donnie to have such an emotional outburst (even stubbornly suggesting that he’s going to take on Krang by himself), which I think emphasizes how frustrated he is at the situation. In a brilliant piece of directing by artist Mateus Santolouco, Donnie’s bo staff inexplicably appears in his hand in that second to last panel, emphasizing his defiance of Splinter’s plan. It’s a trick several pages in the making, requiring that the staff go missing several pages earlier, and I think it’s incredibly effective.

Then again, I’m always a sucker for Santolouco’s art. This issue lets him show his full range, between a few remarkably dynamic fight scenes, a touching emotional reunion between April and Casey, but the argument between the Turtles is the true centerpiece of this issue. Santolouco has an incredible ability to imbue the unnatural-looking turtles with strikingly natural postures, making Mikey’s discomfort in that scene as apparent as Raph’s defiance. All the while, stoic Leo sits hunched forward with his hands folded in front of his mouth — he’s taking it all under advisement. Every moment is an opportunity for Santolouco to explore these characters, and he takes full advantage of it. Even his character designs emphasize the different characteristics of the Turtles, with them all featuring subtle differences in the wrappings and armor on their arms, with optimistic Donnie and Mike featuring light wrapping, and the more pessimistic Raph and Leo erring towards the dark.

I’m sure I could write a whole essay on the subtle differences in their wrist guards (or why Mikey now has those classic elbow pads), but there’s so much else going on here. That argument is actually prompted by Old Hob calling on Splinter to make good on their deal. When Splinter and half of the Turtles arrive to find out what he’s up to, he introduces two new mutants, a dumpster-wearing Hermit Crab named Herman, and a skateboarding Gecko named Mondo. 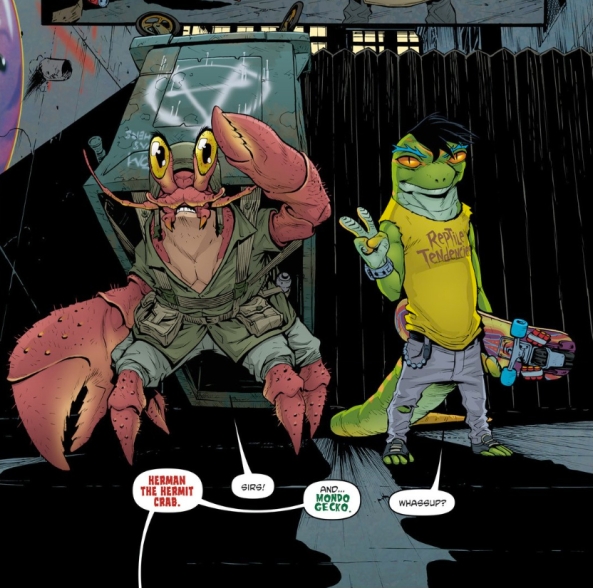 Waltz manages to write these characters pretty clearly in their brief appearance here, but again, Santolouco provides a big assist in the character designs. Want to make it clear that Herman is an obedient soldier? Let’s put him in a flack jacket and army helmet. Want to make it clear Mondo is a skater punk? how about sagging skinny jeans and an emo haircut? It could feel a bit too-on-the-nose, but it actually feels right coming from the crack team of Old Hob and Lindsey Baker. Speaking of their brilliant plans, they decided to sent Pete to pick up more animals to mutate, only he’s currently spilling the beans to Beebop and Rocksteady…maybe they shouldn’t have trusted him with literally any responsibility.

Oh man, Spencer, I didn’t even touch on the April/Casey or Angel/Harold scenes, though they were pretty light on actual event, basically just reminding us that these characters still exist and are still doing what we saw them doing last time. Did you get any more out of those? I know you’re still pretty new to this series, so did those help establish those characters for you, or were they just confusing?

Spencer: I did find the Angel/Harold scene confusing, but I can chalk that up to my relatively new status in the Turtles’ universe. I really have no idea who these characters are or how they’re connected to the Turtles, and the scene itself gave me little to work with, basically establishing that Angel’s a girl testing out some sort of suit and that Harold is probably its creator. That said, I found the rest of the issue to be remarkably accessible. Waltz is quite skilled at spelling out relevant plot details and character relationships without making the dialogue feel too expository; meanwhile, Santolouco’s art can imply so much with only a few wistful expressions, and together these creators can fill in entire backstories without derailing their ongoing story. 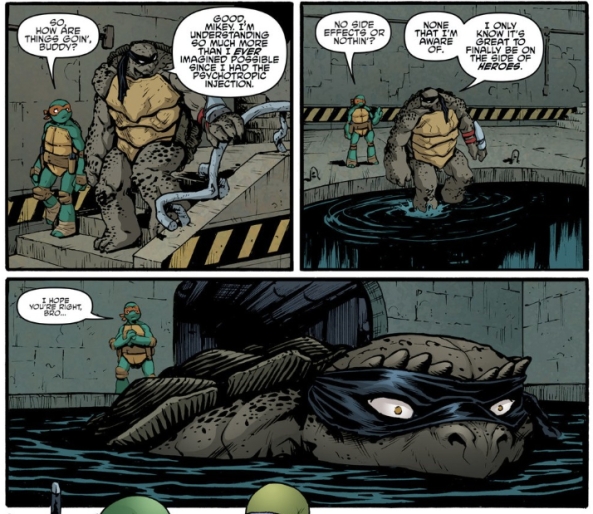 This is my first exposure to Slash but already I’m in love with the character. Santolouco’s design immediately spells out that he’s a gentle giant, massive and dangerous looking yet calm and serene, and his quiet wonder at his new intelligence combined with his friendship with Mikey is incredibly compelling. With just a few sentences and gestures they establish a relationship filled with both affection and conflict, and I’m almost afraid to go back and read their backstory because I’m worried it won’t live up to the story I created in my head based off these few pages. I’m sure I don’t need to, but I just want to reiterate once again how amazingly accessible this issue is; the fact that we’re 38 issues into an ongoing series yet it’s still welcoming to new readers is impressive.

New reader or not, it’s impossible to ignore the idea of family at the heart of this issue. The family unit made up of Splinter and the Turtles is the heart, the core of this title; they’re an absolutely adorable family, but also remarkably functional, and that’s what makes Donnie’s outburst all the more shocking. The fact that Donnie’s debating with his family goes a long way to explaining why things get so heated so quickly. Donnie feels like Splinter is deliberately ignoring his side of the debate because his mind is already made up; it’s frustrating to feel like you don’t have a say, but even moreso when it’s with family and even moreso when you’re as smart as Donatello. Whether he’s right or wrong is almost irrelevant at this point.

That said, I feel like both Donnie and Splinter have valid points. Krang is probably the more pertinent threat, but going after him almost definitely means that Shredder will take over New York/kill the turtles/both. Truth be told, no matter who the Turtles target first, the other enemy is going to take advantage of their distracted state and strike. The best case scenario might just be if Shredder and Krang team-up, which I’m sure has happened at some point, but that seems too easy an answer for this creative team. That might just be wishful thinking on my part, of course: the tension this debate is causing within the family is too interesting to settle that easily.

Compared to the tense family drama and exciting new characters of the A-Plot the scene with April and Casey is nowhere near as exciting, but that doesn’t mean it’s not important or interesting; I, for one, am fascinated by how it hits nearly every point Drew and I have made about this issue in the space of two pages. 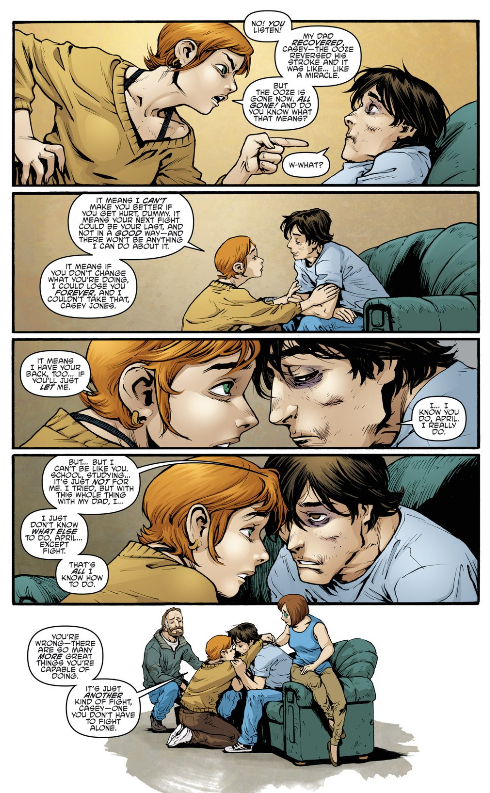 First of all, it’s just as accessible as the rest of the issue; about the only thing it doesn’t do is establish why April and Casey are important to the world of TMNT (and c’mon, even newbies probably know who these two are), but otherwise, Waltz quickly and succinctly recaps recent events for both characters and then he and Santolouco get to showing how close April and Casey really are and how important that makes them to each other. Just as in the A-Plot, it all comes down to family; I get the impression that Casey was a big help in getting April through her father’s illness (and eventually curing it), and April’s family already seems to have adopted Casey as one of their own, helping to make up for his less-than-stellar father. It’s another incredibly compelling dynamic, not only because of how close April and Casey are, but because of the inherent conflict: can April and her family truly help Casey reach that epiphany, to realize he’s not alone, or will he continue to fall victim to his own insecurities?

It’s the beginning of an arc, so we’ve got a lot of these kind of questions and not a lot of answers yet, but thanks to more impeccable work from the creative team, these questions are compelling enough that I want to stick around to find out the answers. It’s honestly kind of remarkable how fleshed out this world feels, yet how accessible it is at the same time. It’s long-form storytelling at its best.