Today, Greg and Drew are discussing The Fade Out 2, originally released October 1st, 2014.

Greg: There are good mysteries, and there are great mysteries. Good mysteries tend to emphasize plot above all else; they’re called “whodunnits” because discovering the identity of the criminal through the minutiae of procedural clues is the utmost goal. If the story isn’t revealing who did it, it’s narrowly focused on the search for it, and nothing else. Great mysteries are concerned with plot, too, but less so than mood, dread, ambiance, and internal conflict. If the story isn’t revealing who did it, that’s okay, because it has many other avenues its interested in. The Fade Out belongs in this latter category, as the world and feeling is so compelling, I don’t think I would mind if they never solve the mystery of starlet Valeria Somers’ death. You could call it a “whydunnit”.

At Valeria’s funeral, our protagonist and screenwriter Charlie wonders what emotions are real and what are just Hollywood performances. His drunk, blacklisted screenwriter friend Gil can’t hold onto their secret much longer, and Charlie can’t rebuke his affections towards Gil’s wife Melba much longer. Studio exec Mr. Thursby demands Charlie and genius director Franz Schmidt redo the entire movie Valeria was to star in — a dubious prospect, both practically and morally.

The issue hits on many of the well-trod tropes of noir (I say that as a compliment, being a lover of noir), yet differs in some intriguing ways. For one, narrators in noir (noirrators, copyright Greg Smith 2014) tend to be first-person perspective, but this title employs an omniscient third-person narrator. Noir has always touched on existential anxieties, with their twisted narratives reminding us that our random and uncaring universe couldn’t care less about our attempts to control it, but the third-person device puts these fears front and center. With a point of view, you at least have an attitude, a portrayal of individuality about what’s going on. When the point of view is shifted to an all-knowing, all-seeing, nonexistent entity, its dissections and observations feel like a magnifying glass concentrating sunlight on a wriggling ant. It amplifies the futility, even the absurdity of human emotion and behavior; strangely enough, this is less of a bummer for me than it is a further reason to recommend.

I need to sing the praises of colorist Elizabeth Breitweiser, whose work complements the specificity of the noir world, and also sets it apart from other noir-influenced titles. Her colors feel loose, unbridled, unrestrained, like jazz. They look hand painted; despite what I said earlier about noir’s loss of individual contribution, these colors ooze with humanity. They swirl and careen and end when you expect them to keep going. In other words, they perfectly reflect Charlie trying his best to make sense of everything swirling around him. I can’t help but compare this to Frank Miller’s stark, black-and-white, what-you-see-is-what-you get work in Sin City. While both are stylized, Breitweiser’s colors give it an aching heart and soul lacking in Miller’s cold, unflinching point of view.

Speaking of cold, Breitweiser also does great work with fundamental color differences — namely, the contrast between cool and warm colors. This issue is a slow burn — underlying tensions coil and simmer until they explode in a brief, passionate outburst of violence and emotion. Then, they cool down, reset, repeat. Breitweiser’s method of tracking this progression with colors is simple, yet strikingly effective. Her work is exemplified in this page below, where the primary colors of gray and blue are jarred by the explosive reds and oranges, just as Charlie explodes in rage, regret, and alochol. 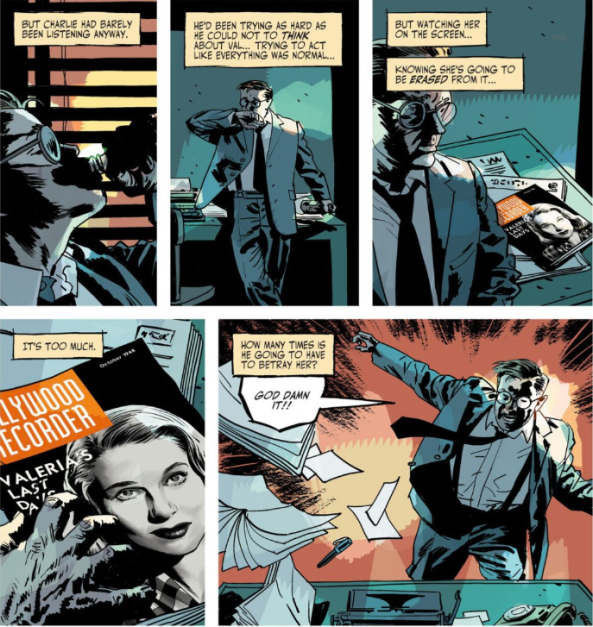 Drew, you talked up this title to me recently, painting it as a great noir that also requires the reader to be knowledgeable of Hollywood and film culture, particularly post-World War II. Indeed, writer Ed Brubaker has little need for heavy-handed exposition, choosing instead to trust the reader and let the situations speak for themselves. Hell, even the title of the comic is film jargon. As a person who, like Drew guessed, is knowledgeable of this culture, I appreciated this lack of hand-holding, but wondered whether a person with less of a film dork background would get as much out of it. For example, in a flashback scene dripping with sensual energy between Charlie and Valeria, Brubaker uses an old Hollywood joke to convey some vital information:

The punchline to this joke, which I know offhand because I use my brain for important things, is “She slept with the screenwriter.” It’s a joke that implies that screenwriters are so low in the Hollywood totem pole, that sleeping with them to get ahead in the movie biz as opposed to, say, a producer is dumb. When Valeria delivers this line, giving her best come hither eyes to Charlie, the only way a reader can know with certainty what is about to happen is if they happen to know this arcane Hollywood joke. Context clues can take you far, but the more you know, the more you’ll get out of it.

Mr. Baumgartner, this issue hit all the checkmarks for me, and I can’t thank you enough for the recommendation. Did it work for you as well? Do you think folks without a film culture background could enjoy it as much? Also, it’s worth noting that there are only two main female characters, one of whom is now dead, and the old school Hollywood star system, in a sense made to exploit women, is seen in full force. Do you think the title is interested in dissecting these gender-entrenched tropes, or merely representing them?

Drew: Honestly, I’m not sure you could represent those gender roles so frankly without eliciting some level of dissection from the audience. It’s the same kind of warts-and-all approach to the past that makes Mad Men such an interesting piece of social commentary — we’re so shocked by the casualness of the sexism that we have to react to it. Of course, I think this issue is actually a bit tamer with that kind of provocation than the first issue, which went for broke in representing the racism, antisemitism, and homophobia of the times. As you point out, killing off one of the few female characters in order to motivate the plot could leave women with limited representation in this series, but it’s clear that Brubaker intends to make Valeria Summers an actual character, and not just a rapidly cooling body.

Actually, in spite of being dead, I’d say Valeria is the main character of this issue. Between screenings of her old footage, flashbacks, and her own funeral, Valeria is the subject of virtually all of the conversations in this issue. Indeed, even Gil’s current drunken state (and resulting marital stress) stem from the stress of knowing about the coverup. That makes Charlie’s admission about why he told Gil all the more heartbreaking — the last thing Gil needs is something that makes him feel like more of a mess.

Of course, this issue reveals that Gil actually has a few things over Charlie. Greg already mentioned Charlie’s fondness for Gil’s wife, but I think the more significant piece is that Charlie hasn’t written a word since the war. Gil has been acting as Charlie’s ghostwriter, with Charlie providing the presentable face ever since Gil was blacklisted. It makes Charlie and Gil’s fates much more entwined than we might have thought at first, and their conflicts over Valeria (and potentially Melba) much more complicated.

Greg is right to call this issue a “whydunnit” — we get more about the situation, but not much in the way of event. It’s heavy on the exposition, but it’s a rich, compelling world Brubaker is painting here. He points out at the start of the issue that we can’t trust anyone’s reactions, then proceeds to detail each of those reactions. Both the Producer and Director both had a lot to lose, but the Producer seems oddly enchanted with Valeria, and the Director is quickly hatching plans for a dramatically different picture. Ultimately, I’m most intrigued by Gil’s violently emotional reaction — could he be the real killer? That may be one of my more half-baked theories, but this issue does establish Gil as willing to take the fall if he thinks it’s necessary — maybe he’s upset that his crime has been covered up?

In any event, a big part of what makes the exposition so palatable is the lushness of Sean Phillips’ art. Phillips reserves his noiriest inks for  Charlie’s breakdown in his office — he establishes the window as the primary source of light early on, exaggerating it to great effect as he realizes where Gil must be. 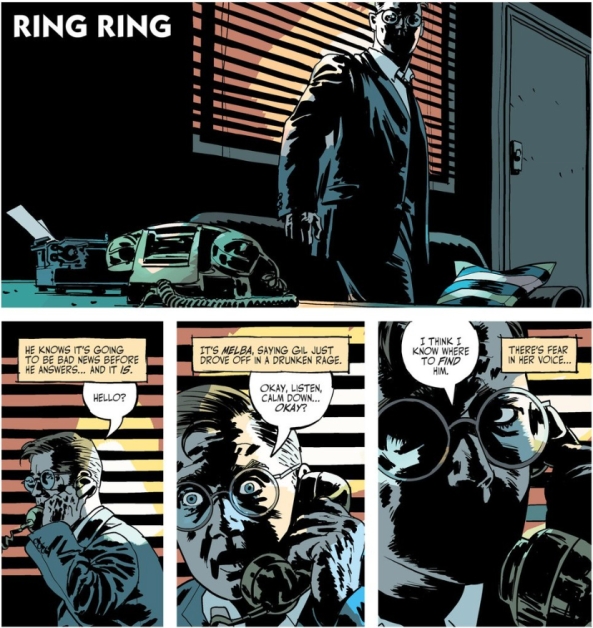 Charlie’s relationship to Gil is rapidly becoming the focus of this series, which I think is a very strong choice. I look forward to seeing how their relationship comments on the nature of collaboration (it’s worth noting how long Brubaker and Phillips have worked together), but it may be too early to draw any conclusions there.

Greg, I’m thrilled you’re enjoying this series, especially the more inside-LA stuff. I think it reads well enough for us plebs on the outside — Hollywood likes to go up its butt often enough for much of the old studio system to be pretty common knowledge — though I’m sure you’re picking up on subtleties that I’m missing. I think it works on both levels, though I might stay on the lookout for your annotations on the references that I miss.