Spencer: You never really know someone until you live with them. I’ve never moved in with or married a significant other, but even just spending a few days rooming with friends on vacation in the past has tended to reveal entirely new sides of our personalities — most often, the annoying sides. That said, if you can work past whatever aggravating habits cohabitation may entail, then you’ll also be treated to all your roommate’s wonderful qualities, and possibly even a whole new perspective on the world. That’s the situation Norrin and Dawn find themselves facing in Silver Surfer 6. Norrin’s ill-prepared for his new companion’s many human frailties, but his annoyance is also blinding him to the many advantages Dawn’s “imperfections” have to offer.

Dawn’s seemingly constant need to eat and sleep and use the bathroom is driving Silver Surfer up a wall. Dawn, of course, won’t stand for any of Norrin’s crap, and her demands lead them to Planet Prime, a seemingly “perfect” world where every citizen has trained and perfected one role in society (there’s one perfect ice cream maker, one perfect banker, etc.). Norrin is drawn to their society and Dawn repulsed, but Surfer’s monetary habits quickly run them afoul of Banker One and Warrior One, who actually nearly defeats Norrin’s Power Cosmic. Dawn’s quick thinking saves the day (she makes a powerful enemy by doing so), and Norrin realizes that Dawn’s needs aren’t annoying imperfections but instead chances to slow down and appreciate things he may normally miss, such as the once-in-a-millennium Pentagonal Cascade:

Michael and Laura Allred outdo themselves on this page, but even as a whole this issue proves how perfectly suited they are for Silver Surfer. I can’t help but to think of Jack Kirby’s work on early Fantastic Four issues when I see how the Allreds bring to life the alien planets Norrin and Dawn visit. It’s obvious that the Allreds are having fun illustrating this book and that they and writer Dan Slott want that fun to come across on the page, and it absolutely does; the brightly colored, oddly-shaped alien landscapes might come across as silly in a more serious book, but they fit in perfectly with the more tongue-in-cheek tone of Silver Surfer.

It’s that same fun tone that allows Slott to deliver his moral without coming across as preachy. I mean, the theme of this story is about as subtle as a brick, but it’s hard to care when you’re busy marveling at the Allreds’ art or laughing at the ridiculous Tour Guide and Ice Cream Man. 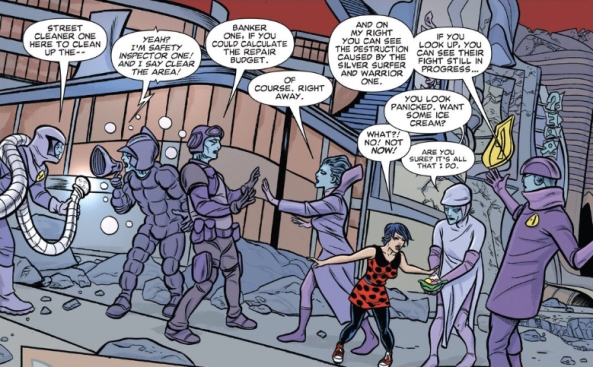 For all the obvious ideas being thrown around, I’m most impressed by how Slott avoids making the society of Planet Prime dystopian. For all its faults I’d much rather live on Planet Prime than, say, Panem, and it’s interesting to me that, instead of taking any sort of action to “correct” Prime, Surfer just leaves to avoid causing more of a ruckus. I think Slott’s trying to say that there’s no problem with aiming to do your very best, but that the problems with Planet Prime lie in how it seeks perfection while ignoring all other viewpoints.

After all, the ice cream on Planet Prime is certainly amazing, but Ice Cream Maker One is so talented that he’d never do something crazy like accidentally mix together chocolate and peanut butter, and where would we be in life without inspired little “mistakes” like that one? Silver Surfer’s gotten so good at traveling through space that he’s stopped paying attention to his surroundings, and would have missed the Pentagonal Cascade entirely if not for Dawn. There’s nothing wrong with doing your best, but making mistakes is still a vital part of life.

In fact, Slott seems to be arguing that trying to come to any one definition of “perfection” is futile in its own right:

Warriors One and Two may have trained to perfection, but they seem to have different ideas about what perfection even means: for One being the perfect warrior means never losing while for Two it means following the rules of their job to a “T”. Which one is right? They both may be depending on the circumstances; who really knows? Perfection can’t be defined that easily.

I mean, while Slott never mentions it, there must be a Writer Number One somewhere on Planet Prime. Can you imagine having only one author to read? No matter how masterful they are, eventually it’s going to get old, eventually you’re going to want somebody else’s take on things. To me, that’s what this issue is all about. We need different perspectives in our lives, and pursuing any path to the point where we can’t take time to consider the viewpoints of the people around us — be they strangers from another planet or the loved ones living in our very own homes (or on our very own cosmic surfboards) — is going to cause us to miss out on a lot of really cool stuff.

Sci-Fi has always been a genre suited to telling these kind of stories and Slott is taking full advantage of that with this issue, but perhaps the best thing about it is that this isn’t just an abstract lesson for the audience to learn, but also something for Norrin and Dawn to learn as well, and it’s just one step in their continually evolving relationship. Suzanne, are you as excited as I am to see how Norrin and Dawn will continue to grow and change together? Do you enjoy how Slott and the Allreds tell this story, or do you find it heavy handed? Do you get anything different out of this issue’s message than I did? What do you think a Flibnep tastes like anyway?

Suzanne: Spencer, I think your point about how diversity contributes to innovation is apt. And yet, Planet Prime’s biggest pitfall is an over-reliance on specialization. In the panel you included above, Ice Cream Maker One offers Dawn Greenwood dessert during the conflict between Silver Surfer and Warrior One. By most standards (and especially Dawn’s), this is a completely inappropriate reaction to a stressful situation. Ice Cream Maker One says simply: “It’s all that I do.” That’s kind of like her saying this is the only way I can make things better.

People have different roles to play throughout our lives. In the course of a day, we shift from role to role and use different skill sets as friends, professionals, lovers, parents, etc. Planet Prime asks the question: what if we could only act out one primary role in our lives? Would that be limiting or liberating? Dan Slott argues that perfecting your craft as a professional doesn’t necessarily lead to success (or balance) in other aspects of your life. Is this message a little reminder to himself as well?

Let’s think back to Slott’s introduction of Planet Prime. Dawn Greenwood eats the most perfect ice cream. Silver Surfer watches the most talented dance artist in Street Performer One. What is Slott’s objection to their abilities? Professional athletes (or opera singers, for that matter) need to be highly trained and specialized to reach such levels of success in the first place. Isn’t there some merit in honing talents and skills so carefully? Slott cautions readers not to become single-minded to the point of neglecting other possibilities. 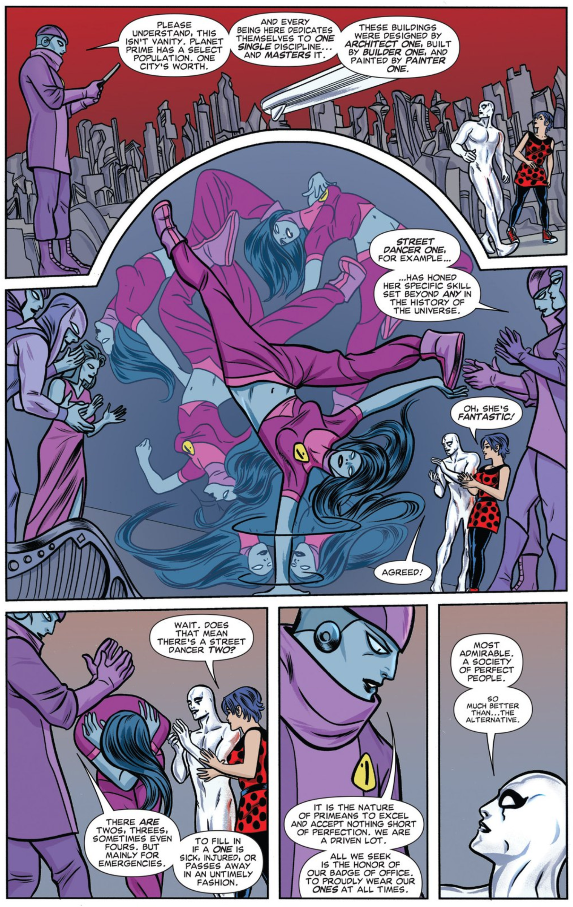 While Silver Surfer chooses to leave instead of “correct” Planet Prime, Dawn Greenwood inadvertently alters the social/achievement structure of their society. She has Surfer remove Warrior One’s badge of office and demote him to Warrior Zero, a role without precedent and “an outcast.” What will be the unintended consequences of his change in roles? Will his new role as an enemy to Dawn and the Surfer impact their exploration of the cosmos? I’m curious to see how their journey and the mistakes they make on these (relatively) contained worlds impact the greater story on a thematic level.

I’m glad you mentioned Jack Kirby’s work on Fantastic Four, Spencer. I devoted some of my weekend reading to their early adventures. Allred’s work channels some of Kirby’s kooky world-building like on Planet X. I’m delighted by Allred’s contributions to the book and its unique, referential vibe so far.