Taylor: Whenever we think about the 1950’s we inevitably think about the Cold War between Russia and the USA. The Space Race and a setting for alternate histories aside, the Cold War did little for either country. In the USA, fear of communism ran amok to such an extent that senators were able to persecute people on mere suspicion. In the USSR, money was spent so much on military and the like that the basic needs of many citizens were forgotten. In both cases there is a strong lesson to be learned: don’t let fear dominate your decision making. Despite these warnings, people continue to make this same mistake over and over again. In TMNT 38, we see that even the very wise and powerful are susceptible to the pull of fear. The question is, when they succumb to it, just what are the consequences?

After quitting  his family last issue because Splinter refused to take the threat of  the technodrome seriously, Donatello pays Harold a visit. He hopes the grumpy scientist will see the reason of his argument and help him in his cause. However, Harold has his hands full with multiple projects, the most important being Angel’s exo-suit. Harold pacifies Donny a little bit by giving him an update on his portal and by letting Donny work on Metalhead. While all of this is going down, Splinter and the rest of Turtles meet up with Hob only to have their party crashed by Bebop and Rocksteady. Necessary hijinks ensue.

On first glance, not a whole appears to happen in this issue. When we dig deeper however, we see that some significant themes are being developed. The first and most prominent of these is how fear has begun to persuade the actions of our characters. Splinter, previously the embodiment of rat-like wisdom, seems to have become an unreliable fount of leadership. What at first seemed a reasonable obsession with defeating Shredder now seems like the Ahab-like errand of a mad man. Sure, Shredder is evil, but when the potential extinction of Earth is on hand at the hands of Krang, perhaps one’s focus should be elsewhere. What makes this indifference so disturbing is how Splinter is willing to let Donatello leave the family because he represents an obstacle to his goal. 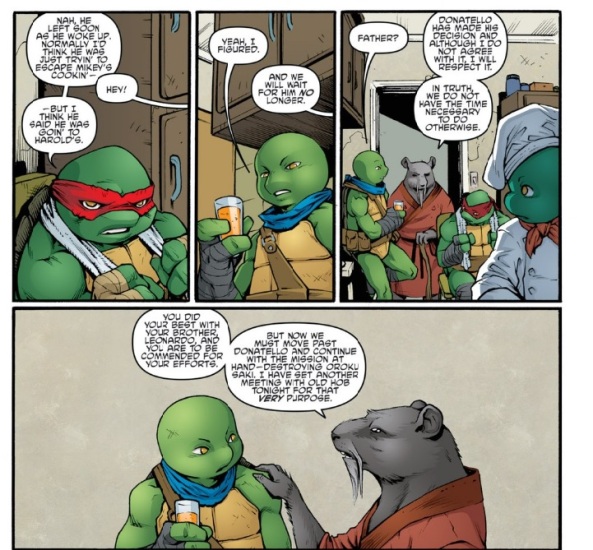 Unlike Leonardo’s leave of absence, Splinter just doesn’t give a shit that Donny’s gone. This shows us just how much Splinter’s fear of Shredder has warped his thinking. Instead of taking the time to worry about family (always a paramount in this series), Splinter only looks to the next steps in stopping the Foot Clan. Heck, he doesn’t even mention the technodrome. Throw in his misguided trust and alliance in and with Hob, and it’s clear to see Splinter is not the leader he once was. Fear has taken root and robbed him of his most valued ability.

In similar fashion Hob displays his fear of humans when he attacks Rocksteady and Bebop because they were humans who became mutants instead of animals that became mutants. To us, that seems like it shouldn’t be a issue, but to Hob it’s a whole other bag of apples. 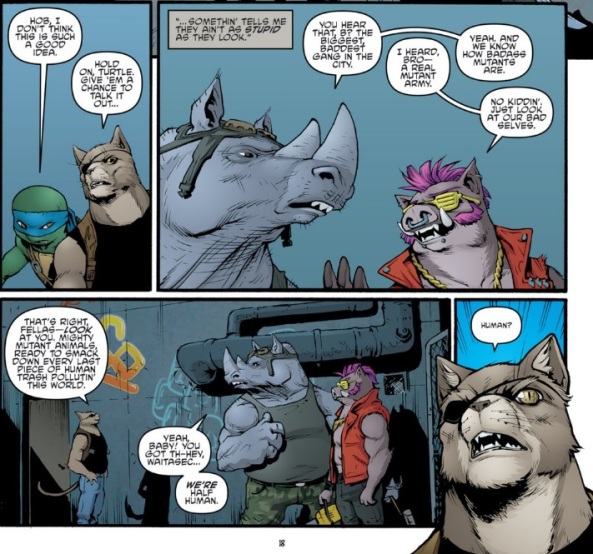 Any reasonable and logical being would realize that a mutant is a mutant, not matter their origin. To Hob, who suffered greatly at the hands of humans, this is big difference though. Any human, even if they be half Rhinoceros, is still evil. Like Splinter, Hob’s fear of something (humans) is clouding his judgment and causes him to make decisions that are outright counterproductive to his plans. In this case, he picks a fight with two huge mutants who were just about to help him to his end goal. This distrust mirrors early (and, sadly, to some extant, current) racial tensions that dominated the history of America. When people refuse to accept others who are different based on superficial reasons, everyone loses. Thus is the second major theme developing in this arc.

How do you feel about this issue Drew? At first I wasn’t a fan, but upon second reading I enjoyed it much more. I’ve come to really appreciate the nuance this title is written with. Your thoughts? Also, Santolouco is great as always. I love how diverse his portrayals of all the mutants are. This picture basically says it all: 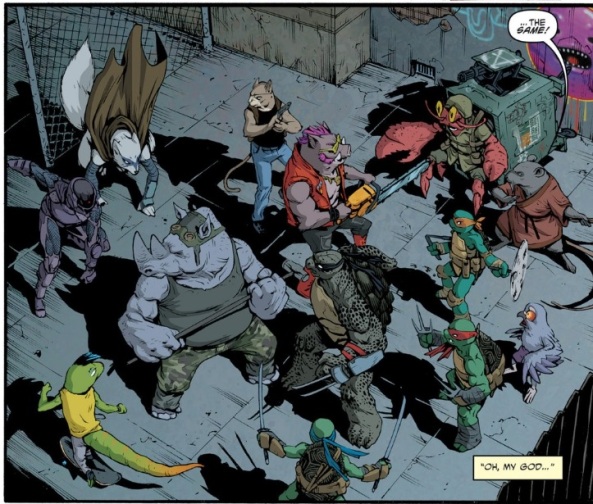 Are you as delightfully entertained by this detail an looniness as I am?

Drew: Absolutely! I’d say that that fight scene (and the build up to it) was more than worth the cost of admission. You’re totally right about fear being the major motivator here. Indeed, fear is such an important touchstone for this issue, it’s kind of jarring when it’s absent from a scene — most notably, Casey’s little domestic non-drama with the O’Neils. It boils down to Mrs. O’Neil saying nice things about Casey, then Casey being handy when Mr. O’Neil can’t get the coffee machine to work. It’s not much — notably less urgent than all of the high drama and action happening elsewhere. It’s a good thing Santolouco was on this issue, then, because his directing totally saves that scene. 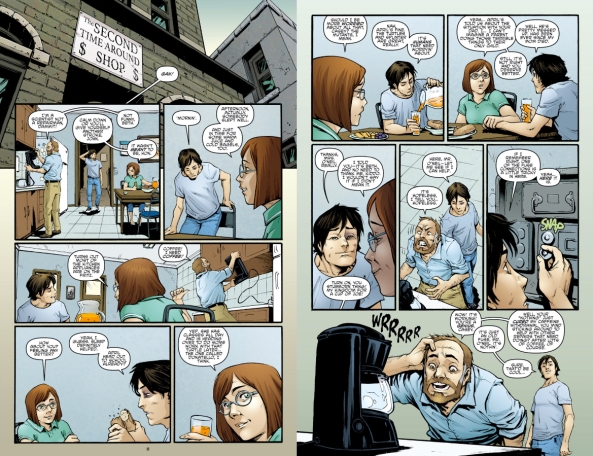 I’ve included the whole scene, but the point isn’t to read the dialogue — like I said, it’s pretty drama-free — instead, I want to focus on the way Santolouco’s choices inject the scene with drama it wouldn’t have had otherwise. Notice how physically distant Casey is at the start of the scene. Even when crunched for space, as in the third panel, which forces Casey and Mrs. O’Neil into the same space, he keeps the table just in the shot to show an obstacle between them. Where that first page is all about distance, the second is all about closing it. We can still see the table at the start of the second page, but by the second panel, much of that gap has been closed — they’re now sitting next to each other and physically touching. By the third panel, Santolouco drops the table out of the shot entirely, and demonstrates their emotional closeness by having them overlap in the shot.

That kind of attention to detail is present throughout the issue — Sontolouco really is gifted at revealing the dynamics of character relationships in individual panels. I could easily burn through the rest of my word count on the shifting landscape of allegiances in that buildup to that fight, but Taylor brought up some interesting ideas I wanted to respond to. Most notably, Old Hob’s prejudice against humans. Mutants uniting against humans isn’t a new idea in comics (the X-Men have been debating that very thing for over half a century now), though the distinction between animal-first mutants and human-first mutants is a decidedly TMNT twist. Perhaps Old Hob wouldn’t be so quick to violence against them if he had heard Rocksteady exclaim how much he enjoys being an animal?

Writer Tom Waltz is so good at folding in references to the cartoons and movies, they often catch me by surprise. I love being a reader of this series.

Anyway, back to the fight. Taylor, I generally agree with you that not much happens in this issue — mostly just making good on seeds planted last month — but I do think seeing Old Hob’s army in action was an important proof of concept. Eight able-bodied mutants (and one Pigeon Pete) doesn’t make for much of an “army”, and while they look effective, the two guys they’re fighting are still standing at the end of the issue — and that’s with the unexpected reinforcements of Alopex and Angel. Actually, the arrival of those two characters does set up a whole world of drama for after this fight ends — the Turtles still don’t trust Alopex, and Old Hob won’t be too happy to learn there’s a human under that exo-suit. I can’t wait to see how that plays out — I just hope Hob is out of bullets.

This series continues to be remarkably flexible in its tone. This issue alone ranges from quiet domestic scenes to a veritable mutant mele, and still finds time to put Mikey in a ridiculous hat. You can’t really ask for more than that.