Ryan: Remember watching Dragon Ball Z when you were younger? Remember how you would be so excited for the final confrontations, but shake your fist of the television screen when an entire episode stretched by and nary a punch was thrown? Well, anime, like manga, like comics, like Dickensian 19th century literature, is serialized. The objective of serialization is to keep readers or viewers invested enough to buy the next installment. Sometimes this can lead to frustrating lulls in action which hide under the guise of building exposition. In many ways, I felt this way about Trees 6. While we receive some rumblings of future events and some fall-out from past occurrences, this issue moves the plot forward the smallest amount possible.

It is never easy threading multiple disparate characters and scenes into a single cohesive narrative; however, Warren Ellis succeeded in this task over the past five issues. This most recent installment focuses on only two of the four main locations explored in the past: the art community of Shu and the Italian city of Cefalu. We begin with Eligia back having a beer with the very same Tito who she joined with Professor Bonjiorno to escape. She fishes for information from Tito and comes up with a gem: Tito’s gang is partially bankrolled with extorted money paid by gay public officials hoping to keep their sexualities hidden from the more traditional, small-town Italian public.

This brings us to one of the central themes of this issue: the perception and acceptance of the LGBTQ communities in the world of Trees. It seems that the arrival of these stoic alien structures with the potential for destroying all of mankind failed to change many cultures’ deep-seeded (one pun limit) homophobia.

Chenglei’s conversation with wizened Uncle confirms the same. Chenglei’s raucous sexual escapades in the last issue leave him with even more questions about his identity compounded by his feelings for Zhen.

After Uncle asks Chengli if he has any questions about what it means to be transgender, I half expected a Sex Criminals-esque info-graphic montage. Instead, the reader receives a realistic understanding of what it means to be gay in provincial, conservative villages in China — a manner similar to many other places in the world in that regard. I mentioned China’s rocky relationship with transgendered persons in the review of Trees 5, and I appreciated how Ellis used these facts to further the emotional journey of a character and remind the audience of the stakes of such an exploration in a place unlike Shu — the haven from fundamentalism afforded by the arrival of the Tree.

With Uncle’s anti-cultural-programming pep-talk in hand, Chengli goes to confess his feelings to Zhen. Her inherent skepticism initially rebukes Chengli’s heart-felt admissions; Zhen clearly seems concerned that Chengli’s interest in her may be closer to fetishization than feelings. Artist Jason Howard uses his color scheme of cool blues and warm reds to accentuate the back-and-forth of this confrontation, and ends the scene in a romantic silhouetted embrace made foreboding by the inclusion of what appears to be an armed drone aircraft in the background with the Tree looming from behind.

This drone, as well as a few panels scattered through the comic intimating that a larger military presence may be coming to Shu, is one of the few advancements of the over-arching narrative in Trees 6. The two larger story lines, that of the Somali Federation’s use of the Puntland Trees as a military stage and poor, poor Marsh infected with alien flowers at the Blindhail Station in Northwest Spitzenbergen, only get about a page a piece, and only enough to know that not many changes have occurred since we last left off. These large plots failing to progress disappointed me in the same way it would David Mamet: he and I both believe that every scene should cause the narration to move forward. Marsh and the Puntland Tree both excite me as a reader most and offer the largest possibility to get the unresponsive Tree to become active, and also made this issue feel more like Trees 5.5 than its own entity. I wonder now to Drew: were you happy enough with an issue of primarily character exposition, or did you, too, feel like you were watching Dragon Ball Z? Also, do you think Ellis is being somewhat heavy-handed with the focus on queer dynamics in this world he has created?

Drew: I’ll agree that the Svalbard storyline is the most developed of the threads Ellis is tracking, but I’m not sure I agree that the Somali and Svalbard trees are the main focus of this series. Moreover, don’t think ignoring them for an issue constitutes wheel-spinning. Indeed, I think a more intimate understanding of how different societies react to the Trees is important both as exposition on the world in which the story takes place, and as important pieces of character development. At the risk of straining a metaphor to it’s breaking point: I think you may be missing the trees for the forest.

You’re spot on about the somewhat surprising focus on LGBBTQ issues, but I think one of the key elements here is how these different communities treat those issues differently. Chenglei discusses how oppressive his village was, and how liberating Shu is by comparison, while Tito is exploiting the homofobia of Cefalu (which he notes “isn’t Milan”). Shu is far to the left of its surrounding country, while Cefalu is far to the right, but the cause is the same: the trees. The trees’ mysterious function (not to mention periodic dumping of toxic sludge) make the prospect of living near one unappealing — unless the thought of living in your society at large is also unappealing. The Shu tree can provide a bastion for the LGBTQ community in China because they aren’t welcome anywhere else, while the Cefalu tree provides a similar haven to right-wingers in Italy.

The trees act as a kind of instant-slum generator, creating areas nobody would want to live independent of socioeconomic development. That is, these aren’t slums caused by the closing of a factory or the subjugation of a class of people, but simply the presence of something society on the whole fears. I suppose that could act as a stand in for the crime rate of our actual slums, pointing at how they do indeed become artist colonies with strong LGBTQ communities and/or how that fear can be exploited by savvy political opportunists.

All that is to say, I thoroughly enjoyed exploring the societal implications of the trees. I appreciate that researching and setting weapons on the trees has a much more direct relation to the trees themselves, but ultimately, I think this series is about the “silent pressure” the trees exert upon the world. I understand that we would want to learn more about and even exploit the trees, but seeing their more subtle effects reveals much more about the human condition, which is what attracts me to these stories.

For all my talk about how it’s okay if this issue doesn’t advance the plot, I actually think it does. Sure, all we see in Somalia is that the weapons are still there, but this issue also shows us that Marsh may be more infected than his caretakers realize, it carries us through to a more militarized Shu, and gives Eligia leverage over Tito and his extortion plot. Sure, nothing too big happens, but virtually all of the characters end the issue in a decidedly different place than they began, which is really all I can ask of an issue of comics. Heck, I’ll even defend the non-event of that page of the Somali tree. 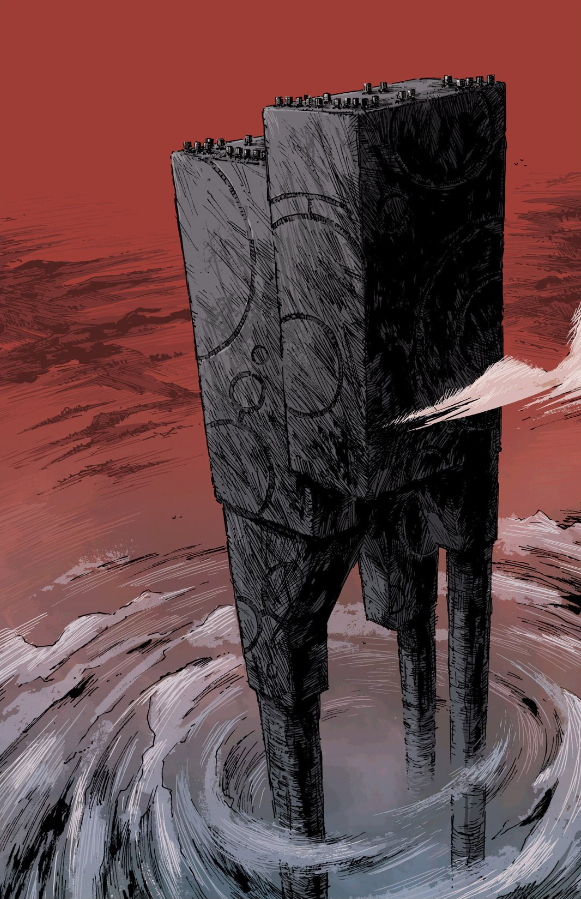 The presence of those weapons on the tree is meant to feel somewhat static, literally hanging over our heads as we wait for all-out war. The longer Ellis can draw out that sense of impending doom, the more effective it is, so an issue where there’s no change (and a beautiful page like this to remind us that there’s no change) makes perfect sense to me.

I can definitely see how this issue might be slow (frankly, I’m glad I didn’t have to summarize it), but I think it enhances the mood and themes of this series in important ways and advances the plot — just maybe in ways we weren’t expecting. I suppose our mileage will vary on the value of those surprises.