Patrick: Joker is one of those characters that resists definition. In fact, we often use that lack of definition as a defining trait. I’m going to do a disservice to whoever made this observation — because I can’t remember where I first encountered it — but the most terrifying thing about Joker is that you never know whether he’s going to murder a child or throw a pie in Batman’s face. Arguably, the only thing that motivates the character is the desire to be a good Batman villain. Scott Snyder and Greg Capullo have played with this idea before — the Death of the Family even had Joker buying into the importance of their “relationship” — but this latest arc in Batman seems poised to establish Joker as something else entirely. He’s not a instrument of random, but intriguing, chaos, and he’s not in love with Batman. No: he’s Batman’s nemesis, and that means that he’s a sort of anti-detective, setting up mysteries that Batman cannot solve, corrupting superheroes and putting everyone’s lives in danger in the process.

The issue opens on an oddly familiar scene: Batman and Superman are locked in combat, Bats only surviving through sheer force of preparation. Bruce’s inner monologue seems just as fatigued by the idea of Batman fighting Superman as I am (…can’t wait for Dawn of Justice...), and even goes so far as to intimate that he knows that all it’s going to take to break Superman out of whatever state he’s in is to reason with him. This is playing directly on our expectations of these characters and what we know about the innumerable times they’re forced to start punching each other. Whether within the narrative, or just externally, these characters are ideologically opposed, and the clearest way to illustrate that in superhero comics is to make them slap each other around. Not this time, though. There is no getting through to Superman, and you could make the argument that Batman’s not really fighting his friend in this sequence at all, but simply beating back another of Joker’s weapons and there’s no reasoning with Joker. That’s why it’s so damn shocking — to both Bruce and the reader — when Superman turns his laser gaze to a nearby apartment building, burying Batman and causing a ton of collateral damage in the meantime.

From that point on, the fight plays out in a more straightforward fashion — so straightforward that Batman bests his frenemy with Kryptonite. It’s still a clever application of Kryptonite — weaponizing spit is inspired — but there’s a clear and somewhat predictable through-line that leads from cause-to-effect, wrapping up the fight as it was always bound to wrap up. That’s where Greg Capullo shows his true genius: the staging of this final action beat is incredible. Prior to this moment, every page trades in long, horizontal panels, evoking a blockbuster cinematic quality. The second Superman grabs Batman and zips into the air, the panels become narrow, page-spanning vertical slices of page. Not only does this convey their wildly uncontrollable motion upwards, but it obscures the reader’s view of what’s happening. Batman’s totally thrown here, and so are we. 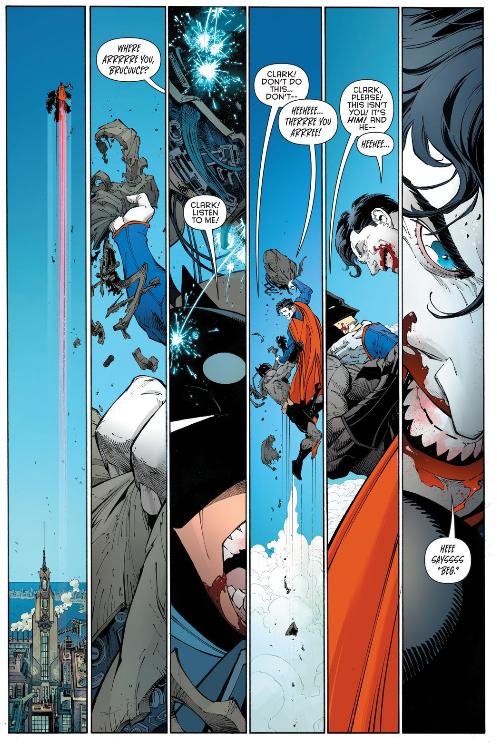 When Batman finally does put a stop to their upward momentum, Capullo lets the enormity of the sky fill the top half of the page, with the water below filling the bottom. There’s a direct line straight down from where the World’s Finest start falling to where they splash into the water (it’s a line that’s also suggested by the placement of the voiceover boxes), and it’s a satisfying downward page immediately following that alarming upward page. Apologies for posting two consecutive pages, but this shit is just too good not to share.

Having recovered from all that excitement, Batman and Snyder are able to move on to the question the audience is asking “so where is Joker anyway?” Remember, last time we saw that dude, he was falling down some kind of bottomless pit while his face drifted away on the breeze. It’s telling that Batman has no real ideas — “no leads” in Bruce’s parlance — so he finds himself in the ruins of Arkham Asylum, checking out Joker’s old cell. This is where Snyder and Capullo start planting some clues for fans who might be trying to play detective at home as they read. First, we’ve some close-ups on flies, which were present throughout Joker’s face-less return (they must have been attracted to all that rotting face-meat), but remember that a fly also featured heavily into that Hahnium stinger at the end of Batman 17. That dovetails nicely with Bruce’s observation that they kept Joker is cell number 0801, which he notes are “the eighth and first letters of the alphabet.” Snyder makes sure the reader has to do that last bit of math on your own: “H.A.” It’s so subtle, but not actually giving the reader the letters engages us in a form of problems solving — however obvious the solution may be.

That’s when Eric Border shows up. Remember Mr. Border? He came to Arkham in the Batman Annual #2 — an innocuous story that tangentially tied in to Zero Year — and had one hell of a first night working at the asylum. I’ll admit that I had forgotten that the character existed… mostly. Eric Border is just the right kind of memorable: you know that there was someone we were introduced to, but not someone who made enough of an impact that you’d suspect him of anything fishy. Batman didn’t and I didn’t. So when Eric starts to reveal his true identity, the reader naturally feels like they just weren’t a good enough detective to figure it out ahead of time. I love the convoluted way that Joker breaks down the name “Eric Border,” which he roughly translates to “Eternal Prince Jester.”

Drew, I am just burning through my wordcount here and there’s so much I haven’t touched on, like Capullo, Danny Miki and FCO Plascencia’s impressive use of blackness in that last scene — especially considering how colorful the rest of the issue is. Or how about Batman having more visions of his own demise at the hands of Killer Croc? That makes Joker not just the anti-Batman and the anti-Superman, but a grim figure of death to boot. It’s an appropriately terrifying reinvention of the character and this issue is a stellar introduction.

Drew: It’s that “figure of death” element that has really captured my imagination here. While I’m less certain this month that Bruce is only fighting hallucinations here, there’s no doubt that he’s still fighting his worst fears. The Justice League? You bet — both having to fight them AND being without them for the better part of a week. To drive home exactly how afraid Bruce is of this eventuality, Snyder lets us in on the clever detail that Justice League policy keeps the team from assembling in all but the most secure locations (aside, unfortunately, from a recent event at the Gotham Children’s Hospital).

Perhaps the bigger fear, though, is of being trapped inside Arkham. We could dissect the psychology of Batman — and why he might be averse to being pathologized, lumped together with the very criminals he fights — but Snyder provides a much cleaner, clearer reason for why Bruce would fear imprisonment: he won’t be able to save Gotham. Plenty of great (and not-so-great) Batman stories have sidelined Bruce from the action, but it always adds insult to injury when he’s hobbled by some terrorizing force, giving that force the freedom to run his city. Indeed, it’s not even death that Bruce fears in his hallucinations, but the failure he associates with it.

In that way, prison is a horrible kind of living death for Bruce — one where he’s failed, but has to live to see the consequences.

That notion of living with failure has been a huge part of Snyder’s run — he was trapped in the Owls’ labyrinth, he was captured (along with the rest of the Bat Family) by the Joker, and he was knocked unconscious while the Riddler took over Gotham — but he always rose back up to win the day. It’s easy to see those all as standard second act break lowest point heroes journey stuff, but I think the important piece is the stakes. It’s never a pretty lady or a schoolbus full of children that hangs in the balance, but the very fate of Gotham. It’s not that Bruce wouldn’t work to save those other things, just that they don’t provide the same level of existential fear that jeopardizing Gotham does.

Though, now that I think about it, Gotham’s fate wasn’t an immediate fear in Death of the Family, which may actually speak to why it was so disturbing, and why the ending of that arc was so much smaller and subtler than the others. The family is important to Bruce, no doubt, but when he fears for his very life, theirs aren’t the voices that he hears. His thoughts aren’t of failing them, but of failing all of Gotham, and Joker’s little game might just have brought that to the surface.But that’s maybe a discussion for a different time.

Back to this issue, Patrick mentioned just how much ink there is in those last scenes, and while Miki and Plascencia are doing fantastic work there, the real star of the show is Capullo, who’s able to give Bruce a whole array of emotions with only a silhouette, some eyes, and occasionally a mouth, feeling very much like something out of the best scenes of Batman: The Animated Series. No, to praise the whole art team, I would probably want to look at that first image I included, where Miki’s line weights and Plascencia’s color holds work together to create this beautiful sense of depth — you can almost feel the murky water surrounding you.

Not to be outdone, letterer Steve Wands even gets to get a little flashy here. The Joker font always draws a bit of attention to the letterer, but what really struck me was Joker’s slow reveal of who Eric Border was all along, particularly, this line:

I’m willing to bet that the Joker font on “see” was scripted, but what kills me about it is that, in order to make it fit a little more organically within the line, Wands uses a different “S” than he uses anywhere else in the issue — something halfway in between his regular and jokerized font. It’s a very subtle detail that helps make that transition all the more natural.

Even with the entire creative team firing on all cylinders, I’ve got to come back to Capullo, whose whole range is on display here, from bombastic action to talking heads to creepy horror scenes. Patrick, I’m with you on being a little tired of “Batman fights Superman,” but I’ll be damned if I didn’t enjoy Capullo’s little homage to The Dark Knight Returns.

In the end, I suppose it’s telling that the conflict we’re complaining about being overused isn’t Batman vs. Joker. Snyder clearly knows what he’s doing, and with this artistic team at his back, there’s no doubt that it’s going to be expertly deployed.