Drew: I tend to jump to conclusions about media before I’ve ever consumed it. I know that seems problematic for someone who reviews media, but with so many movies, shows, and comic books out there, it’s impossible to try them all, so I tend to gravitate towards the ones I think I’ll like. Of course, it’s an imperfect system, meaning I sometimes bet on a dud, or miss something truly great, but without any other way to pre-filter content, I continue to defer to my gut. After weeks and weeks of buildup to Spider-Verse, which seemed to pimp the event as a high-stakes affirmation of Spider-Man’s necessity in not just our universe, but ALL universes, my gut was telling me that this event was not for me, but I decided to give it a fair shot. Fortunately, my gut turned out to be wrong, with Spider-Verse 1 serving not as a herald of doom and gloom, but as a celebration of what makes the idea of Spider-Man so fun in the first place.

I suppose fun riffs on a character are always true of anthologies, but Spider-Verse has the added fun of making virtually anything okay. Want to retell Spider-Man’s origin, replacing Peter with an 11-year-old girl? You got it! You want to tell a Spider-Man story where Spidey and Venom are warring ninja brothers? Sure, why not? What about a gender-bent steampunk story where “Lady Spider” is a debutante? Anything is possible! It’s a Spider-Man elseworlds free-for-all, and the creators seem to revel in the freedom the premise allows them.

Of course, part of my joy may stem from the minimal connections these stories seem to have to Spider-Verse proper. Dan Slott’s interstitials keep the focus on Morlun and the mythology around the Inheritors, but the assembled Spider-Men only show up in one of the feature stories, and the other two make no mention of any larger mythology. I’m sure any of these characters could show up somewhere else in the event (for all I know, they already have), but even without any connection to our universe, I was charmed by these stories.

My favorite was, without a doubt, Katie Cook’s “Penelope Parker,” which finds its titular hero bitten by a spider on a school field trip to Osborn Labs. We sort of know the rest of the story, though Penelope is a bit more focused on the grossness of her abilities than Peter ever was. When Flash Thompson is in peril, Penelope leaps to his aid, but not before donning an identity-protecting costume.

It’s no easy feat to nab the “most adorable story” distinction when this issue also features a contribution from Skottie Young, but I’ll be damned if this isn’t the cutest Spider-origin I’ve ever seen.

For all of my grousing about Spider-Verse, the tie-ins here are actually also quite charming. Slott and artist Ty Templeton craft a one-page Morlun run-in that not only summarizes all of the other Morlun appearances we’ve seen in this event, but also hilariously doubles as an ad for what turns out to be “Spider-Totems”. It’s a fun nod to the old Hostess ads Marvel characters used to appear in, though with the disturbing conclusion that the Spider-Man of that universe is now dead.

I’m even more enamored of Slott’s nod to Spider-Man’s newspaper comic strip, where the momentum-crushing need to recap what happened in the previous installment ends up saving Peter’s life. It’s a cute postmodern conceit, but it also protects that version of Peter Parker (the only one I ever read for years) from the events of Spider-Verse, with the Master Weaver opting to enshrine its purity and innocence by placing that universe in it’s own pocket reality. It’s a nod (or maybe even a dig) at the autonomy of the strip (which is still running), acknowledging that, no, not ALL versions of Spider-Man will be affected by the events of Spider-Verse.

Taken together, these stories paint a loving portrait of not only the idea of Spider-Man, but also the different forms he’s taken over the years. Maybe we didn’t need an event like Spider-Verse to justify an anthology series like this, but even if this is the only worthwhile comic to come out of this event, I think it will be worth it. Spencer, did you enjoy this as much as I did?

Spencer: Oh yeah Drew, this was a blast. Like you, I particularly got a kick out of the newspaper Spider-Man story — its “spending half a strip recapping the previous day’s strip” shtick is such a ridiculous format that you’ll only find in newspaper soap opera comics (for good reason!), and I’ll always enjoy poking fun at it. As someone who grew up obsessed with newspaper comics (and who still reads them on a daily basis), I’m a big fan of Josh Fruhlinger’s Comic Curmudgeon blog; Fruhlinger never tires of pointing out that newspaper Spider-Man is lazy and incompetent, consistently screwing up every heroic action he tries and always being rescued by some other, more competent hero (or villain!). In that sense, newspaper Spider-Man’s fate is both appropriate — as he only survives because he’s rescued — and quite ironic, since he’s quite possibly the iteration least deserving of it.

Also, I just gotta say, when the newspaper strip started fading away and the Master Weaver claims it’s because the universe was chronally unstable, for a minute or two I legitimately thought they faded away because of how newspapers — and, thus, syndicated comics — are dying out and going extinct. Maybe that’s part of his ironic survival — let’s rescue the Spider-Man whose relevance is shrinking by the second, right?

Actually, since I brought him up, let’s talk about Master Weaver for a minute.

Since he first appeared serving the Inheritors I’ve been wondering what his deal is. The Master Weaver is obviously some sort of spider, so is he turning against his own kind by working with the Inheritors, or is he being forced into service by them? By saving the newspaper Spider-Man, he takes part in a minor act of rebellion, but seems to know that he’s limited in how much he can rebel; this only makes me more curious as to how he feels about the bloodshed he’s allowing, and I hope we learn more about him.

While it may somewhat further the story about the Inheritors and the gathering of the various Spider-Totems, though, this issue is still mostly about having some fun with various Spider-Men, and every single story succeeds in that regard. Despite only being one page, the Hostess parody rivals the newspaper story in terms how much I giggled at it, but I also can’t help but to see it as a bit of a message from Dan Slott to some of his more vocal critics. Slott has been receiving a lot of hateful messages on Twitter about “ruining his readers’ childhoods” by, say, killing off the Peter from Spider-Man and his Amazing Friends, so I can definitely read this story, which targets perhaps the most innocent Spider-Man of all, as almost a taunt, a tongue-in-cheek way to show how little credit he gives these claims.

There’s a bit of commentary to be found in Skottie Young and Jake Parker’s story as well. The troupe of interdimensional Spiders that eventually rescue our ninja Spider-Man could be seen as a new family, a replacement for the clan that kicked this Peter out into the cold, and it’s probably serving a similar purpose for various Totems who have lost everything at the hands of the Inheritors (such as Mayday Parker, for example). Still, the main draw of this tale is Parker’s art; not only does he come up with some ingenius designs, such as the Venom symbiote’s Shogun Armor, but his action is dynamic and exquisitely choreographed.

I’m pretty sure I’ve pulled that move off with Billy Kane before.

What strikes me the most about Robbie Thompson and Denis Medri’s Lady Spider tale, meanwhile, is how far removed it feels from the whole Spider-Man concept. Don’t get me wrong, it’s clearly recognizable as a Spider-Man story, but May never receives any superpowers, doesn’t follow any sort of “with great power comes great responsibility” mantra, and, unlike a good 60% of the Spider-Men we’ve seen in this crossover, she’s not even a Peter Parker (instead she’s an alternate version of Aunt May [nee Reilly]). Yet, for all that’s different, our Steampunk Spider still dabbles in some of the core Spider-Man themes. 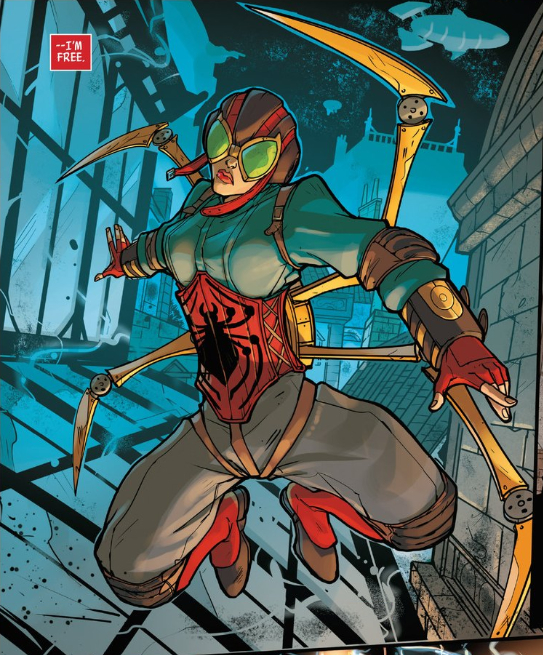 It’s not one of the most known aspects of Spider-Man — it might even be more of a personal reading than anything widely accepted — but I do think there’s an element of freedom that being Spider-Man provides Peter. He was a timid, bullied geek, and being Spider-Man gave him an opportunity to show strength, but it also gave him an outlet for a killer sense of humor that he rarely shows as Peter. For May Reilly, being Lady Spider is a similar kind of escape, an escape from the confines of being an upper-class Victorian woman. May can only be herself when she’s Lady Spider, and that more than anything may be what connects her to the rest of her Spider-Totem brethren.

Even Slott and Humberto Ramos’ three page prologue has a few neat surprises: 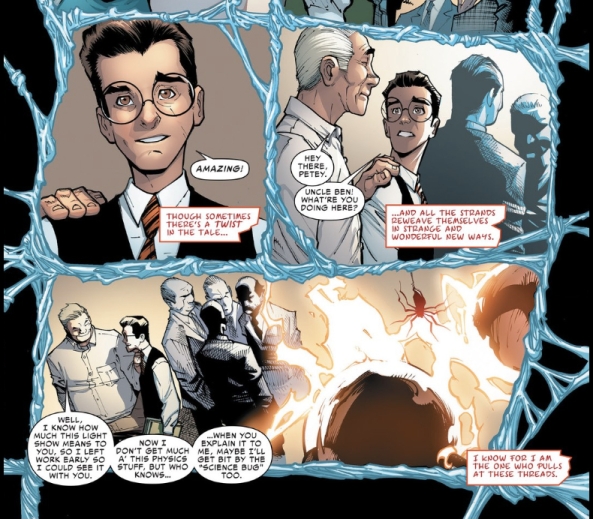 When we discussed The Amazing Spider-Man 9 I mentioned how obvious Slott made the fact that Old Man Spider’s unknown identity would be significant; well, I do think we’ve discovered who is hiding under Old Man Spider’s mask. I hope I’m right, because the idea of Uncle Ben as Spider-Man — especially surrounded by literally hundreds of other Spider-Men, almost all of whom look up to him like a father — has too much potential not to use.

Y’know, between the proper Spider-Verse issues, the Edge of Spider-Verse one-shots, Spider-Verse Team-Up, and now this issue you’d think I’d be getting tired of all these new Spider-Men, but it’s actually the exact opposite; almost every new iteration feels more creative than the last, and I’d love to see many of these guys come back for more adventures. Considering the fact that a new title for the Gwen Stacey Spider-Woman has already been green-lit, I expect we’ll see this sooner rather than later; my wallet won’t be happy about it, but I’m certainly ready to see more Spider-Men from all over the multiverse.