Drew: I suppose it’s no surprise that the phrase Deus ex machina is ancient in origin, but I was surprised to learn that it originally described an actual machine used to levitate actors playing gods in ancient tragedies. Of course, it’s more popular meaning as a totally lazy plot device are also ancient in origin — Aristotle took Euripides to task for using a dragon-drawn chariot to whisk suddenly Medea to safety — which speaks to just how long people have been hating it. I dislike unlikely reversals of fortune or sudden interventions by benevolent higher powers as much as the next guy, but the thing that really annoys me about the thought of meeting the man behind the curtain is the expectation that it will be in any way satisfying. I’ve had enough experience to know that the more interesting a question is, the less interesting its answer will inevitably feel, which makes the presence of a being with all the answers extremely unappealing to me. Jonathan Hickman manages to avoid this a bit in New Avengers 27 by answering some of the less interesting questions, though that unfortunately also doesn’t yield particularly satisfying answers.

This issue finds our Multiversal Avengers, after some unspecified time skipping through the multiverse, arriving at the Temple of the Black Priests. A fight ensues, but is quickly brought to a halt when the Black Priest’s leader arrives and reveals himself to be…Stephen Strange. That Strange could possibly become a Black Priest was hypothesized back when we discussed issue 16 (which, coincidentally, was the last time we saw the Black Priests), though I have to admit to not really having thought about it since. I’d also somehow forgotten that we hadn’t seen Strange since the time jump, which meant this reveal was mostly answering questions that weren’t exactly at the forefront of my mind when it came to this series.

While the question of exactly what caused the incursions eludes us, Strange fills us in on some other answers we may not have expected, effectively revealing how little we actually understand about the situation. Namely, that the Black Priests aren’t bad guys — they’re basically doing exactly what the Builders were trying to do: strategically eliminate Earths in order to save their respective Universes. Or, in other words, kind of what the Illuminati was doing before the Cabal took over. That puts the Black Priests on the good side of neutral (or at least the same level of immoral that the rest of this series’ protagonists occupy), meaning we can all focus on the bigger problem we didn’t even know was there: the raging war the Black Priests are waging against the Ivory Kings and Rabum Alal. Those are the ones actually trying to destroy the Multiverse…at least until we learn what their motives are, too.

That’s a lot of moral grayness, which is why Hickman wraps everything up with a kind of clunky black/white dichotomy, which requires a kind of over-the-top explanation of what boils down to a coin flip. 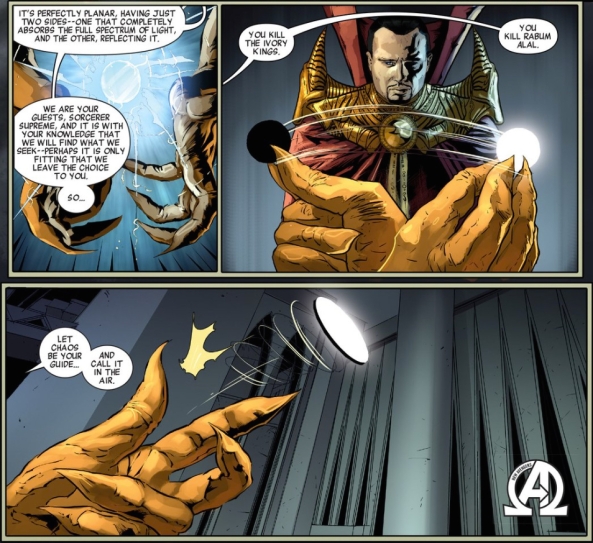 I guess Ex Nihili don’t have pockets for actual change, but that seems kind of cumbersome. (Also, if black means Strange gets the Ivory Kings, and white means he gets Rabum Alal, what exactly is he “calling”?) It’s just awkward enough to make its allegorical significance clear, but I really have no idea what it means. Morality is an arbitrary coin flip? I suppose that fits with the theme of the issue, but a coin flip still seems like a glib way to solve a problem in a series all about hand-wringing and belabored thought.

I’m also not totally sure what to make of Doom’s interrogation/coercion of Molecule Man,which again revels in its master morality, though the focus on “lies,” may suggest that Doom’s moral absolutes are as mutable as everyone else’s. The moral discussions are interleaved with comments on storytelling, including Molecule Man’s reminder that it’s better to show, rather than tell — a bit of a curious assertion in an issue so filled with words.

That’s not to say that there isn’t plenty of action — artist Szymon Kudranksi turns in some stunning pages here — but this issue is about as Hickman-y as Hickman gets, filling his character’s mouths with detailed explanations of sci-fi nonsense when “let’s flip a coin” would do. I suppose that’s just a microcosm of this issue answering questions I wasn’t really asking, ranging all the way down to Strange explaining how magic works. Again, some things are just better left as questions.

I know it sounds like I have nothing but negative things to say about this issue, but I suspect it will grow on me. It’s mostly connective tissue (a category of chapter that Hickman relies on quite a bit), but it’s not all connective tissue. In between all of the answers, there are still some intriguing questions. Mark, were you able to parse any of those questions? Or maybe you were more interested in some of these answers than I was. Am I being too hard on this issue?

Mark: Drew, I don’t think you’re being too hard on it. I did find the answers here a little more interesting than you, but with these answers comes a slight sense of foreboding.

The television show Lost is a series I love and will defend to anyone, but there’s no question the final season is kind of a bust. For me it isn’t the much maligned final episode reveal that is the big disappointment, it’s the seventeen episodes of wheel-spinning that lead up to it. Through the previous five seasons, showrunners Damon Lindelof and Carlton Cuse became pros at evading answering the series’ big mysteries by introducing new questions and framing them as solutions. The problem with the sixth and final season, is that when Lindelof and Cuse were ready to show their hand, they still had to fill seventeen episodes of content before getting there.

It’s impossible to know if we’re experiencing similar wheel-spinning here, and I have a lot faith in Hickman’s longterm vision for New Avengers, but it’s hard not to get at least a teensy bit bogged down by the non-stop mythology and mystery being ladled on.

All that said, I really enjoy the details in this issue. I like how the Black Priests’ magic works, with each priest possessing the power of one symbol, and they add their symbols together to act. I also laughed that the Avengers in this series, without fail, continue to shoot first and ask questions later. Plus, once Dr. Strange has given his explanation, no one’s like, “Oh, then we probably shouldn’t have destroyed all of those Black Priests when we arrived.”

How Dr. Doom and Molecule Man’s exchange ties into the rest of the issue thematically is lost on me, but plot-wise it seems that Molecule Man is going to provide the map Dr. Strange requires to locate the Ivory Kings. The panel right after Molecule Man and Doom disappear is similar to the issue’s introduction to the Nothing Space the Black Priest’s occupy, so maybe they’re jumping to join our ostensible heroes (can one really apply that word to anyone in this series?).

I’m also a bit lost on the choice Dr. Strange is leaving up to fate at the end there. The Avengers aren’t planning to take out the Ivory Kings or the Rabum Alal, they’re going to take out both, so why wouldn’t they strategize and figure out where best to allocate their resources? Or why not attack together? It’s a weird note to close the issue on.

Boy, I guess I ended up sounding down on this issue as well, but I’m really not! Kudranksi’s art is great like always, and Hickman at his most Hickman is always interesting even when it’s opaque. Maybe it’s the Lost fan in me creeping to the surface again.