Spencer: It’s no secret: Gail Simone’s first, Pre-New 52 run on Secret Six is still the best work of her career, but that fact has likely created some heightened expectations for this week’s Secret Six relaunch. There’s no escaping the hype completely, but Simone manages to mitigate much of it by showing from the very beginning how different this volume is from what came before. Much like Catman himself, readers are thrown blindly into the middle of a still-unfolding mystery — it’s a thrilling way to kick off a new series, but some frustratingly inconsistent art threatens to derail the entire experience.

Thomas Blake — a.k.a. Catman — is schmoozing at a bar when he’s accosted by some mysterious soldiers. Despite a savage offense, Blake is captured and dumped in a room filled with other various unsavory types: there’s the former Talon/former Bird of Prey, Strix; Porcelain, who I’m going to avoid gendering until the character’s orientation is made more clear; the psychotic Ventriloquist, Shauna Belzer, and her dummy Ferdie; the size-altering P.I., Big Shot; and the moody magic-mimic, Black Alice. A faceless master tasks them with answering a question, which doesn’t sit well with any of the captives; unfortunately, every second they spend bickering brings them closer to one of the captives being executed!

Simone’s previous run on Secret Six was known for its compelling takes on morality, gender, and sexuality, as well as for its black humor and thrillingly gratuitous violence, and its easy to see all those elements present within this issue. Blake’s fight against the mysterious soldiers immediately establishes a level of brutality I imagine will be maintained in the future, and the peeks Simone and artist Ken Lashley give us of Catman and Porcelain promise much deeper insights into the concept of sexuality and gender.

What distinguishes this volume of Secret Six from the previous, then, is the mystery. “What is the secret?” It’s the question the convicts must answer to save their lives, but it’s also the tagline plastered all over the book’s advertising; this all points to a mythology much closer to Lost or early Heroes than the previous volume of Secret Six. The air of mystery has done its job of capturing my attention, but as the examples of the above shows can attest to, big questions always present the danger of underwhelming (or nonexistent) answers. The best way to overcome this is to focus on the characters and their relationships, and fortunately, Simone has that covered.

While much of the issue is spent introducing each character, Simone still finds time to give us a clear idea of who each character is and what their role may be. Strix has been playing the hero for a while now, but still thinks of herself as the one who’s there to “kil peepel”; I can already see Strix’s internal struggle making her the heart of this team. Simone presents Blake as the audience surrogate, but he also feels like the team’s Wolverine, someone capable of morality and perhaps even leadership when not crippled by his own instincts and issues. Big Shot is the straight man and perhaps even the team’s conscience, but also seems to be hiding secrets of his own; meanwhile, I imagine we’ll get a lot of mileage out of unraveling a character as opaque as Porcelain. Black Alice and Ventriloquist are powerful but unpredictable, but while Alice’s instability seems to stem from teenage angst, Ventriloquist is clearly mentally unhinged. She’s a wild card amongst wild cards, someone who I could see turning against the Six if not handled properly; how the rest of the team reacts to her is already hilarious, but I can see the need for the Six to watch themselves around Shauna becoming a defining part of Secret Six as well.

Unfortunately, while I found the story intriguing, the art hit me as competent at best; at worst, it’s inconsistent, muddy, and often even a little sloppy. Colorist Jason Wright’s work is probably the strongest here; while his interior colors are never as crisp as they are on the Eaglesham cover, he still manages to strike the right mood throughout the issue, be it with the disarming red and yellows in the bar fight or the almost antiseptic coolness he adds to the Six’s cell. That said, maintaining those moods sometimes comes at the cost of coherence: 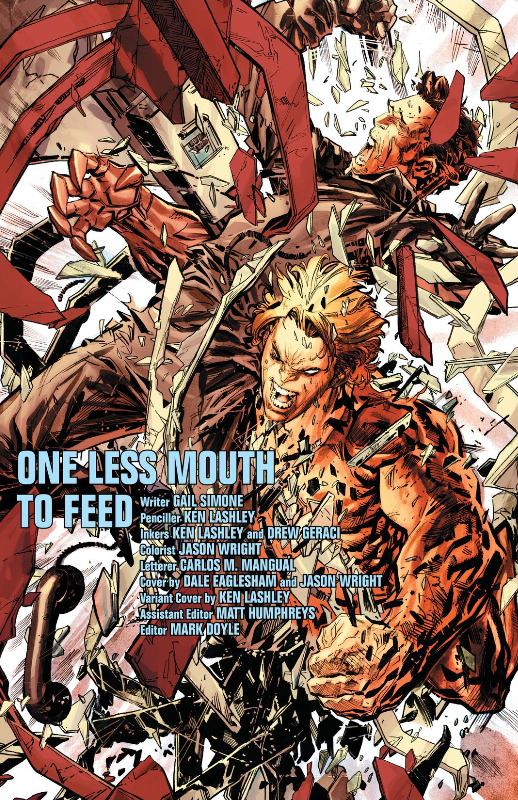 The colors here are just too similar — nothing differentiates Blake from the soldier or the phone booth, causing all three to blend together into a bit of an incoherent mess.

Lashley’s pencils are often striking and dynamic, and his sketchy style makes sure that the mood never feels calm or boring, but again, this comes at the cost of coherence. 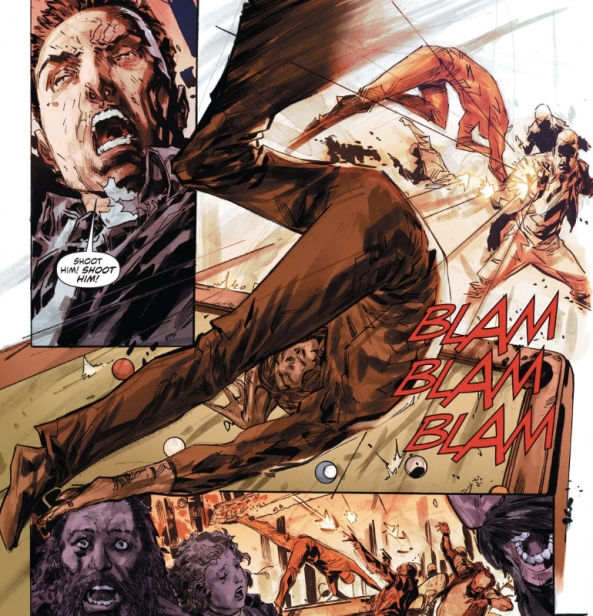 What’s happening?! Lashley’s pencils are so loose that I can’t literally tell which character is Catman here. Is he the man leaping over the table, or is that a victim of Blake, who may actually be the man pouncing in the background — or is he somehow both? The third panel, with the man on the table striking the same pose as in panel two, doesn’t help at all; is this the same scene, or a new shot? The background is so poorly established that I honestly have no idea. 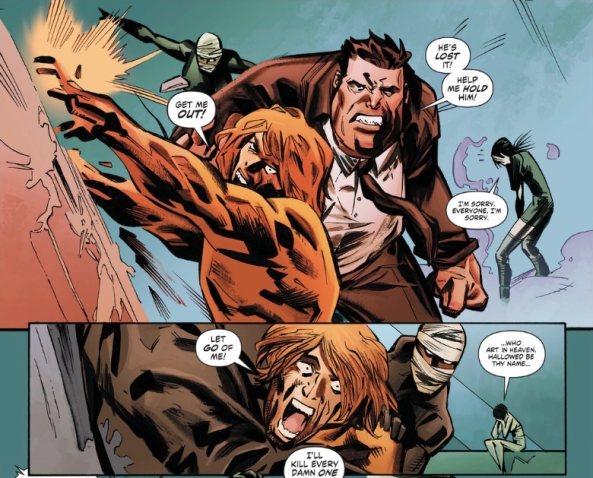 I have the same problem with Black Alice here, whose features completely disappear between panels as she collapses onto the (randomly appearing) bench. Also, look at the difference in inking between this image and the previous; Lashley was inking his own pencils in the prior, while Drew Geraci takes over in the latter, and Geraci’s inks somehow manage to make the art even less consistent, with characters’ very features fluctuating between panels. I hate to be this blunt, but the art in this issue is kind of a mess.

I want to love Secret Six so much, but while Simone’s story is enough to keep me interested in the title, the art is holding me back from wholeheartedly embracing it. Suzanne! You may have been even more excited about this issue than I was; did you have similar problems, or did you find more to love?

Suzanne: Spencer, this is a hit-or-miss issue for me. Part of that reaction relates directly to the hype and massively high bar Gail Simone established for herself with her previous work. The Birds of Prey/Secret Six crossover counts as one of my favorite story arcs of all time. It also features one of the silliest fight scenes; Batman swings a punch at Catman and says: “And if you must know — I had a burrito.” How would I feel about this book if I didn’t absolutely adore what came before it? Would I stick around for a second issue? It’s nearly impossible for me to separate the characters from their history and from Simone’s other contributions. Moving forward, I’ll embrace this bias and hope it adds a different awareness to my analysis.

I’m going to piggyback on Spencer’s point here about the visual shortcomings. As a reader, there are subtle adjustments from artist to artist as you get used to a particular style. Initially, I like to give some leeway as I try to figure them out. But certain inconsistencies can be jarring and take away from subtle character interactions. I don’t recognize The Ventriloquist until she introduces herself toward the end of the book. Catman’s overall physique and facial features vary from almost page to page. He appears as a pretty boy in the initial pages, only to become more gaunt and even seems to have a concave face in a panel below. Simone’s script has to work twice as hard when Ken Lashley’s pencils miss out on visual cues. I can’t help but wistfully reminisce about Nicola Scott’s ability to draw sexy Catman, sexy anyone for that matter. 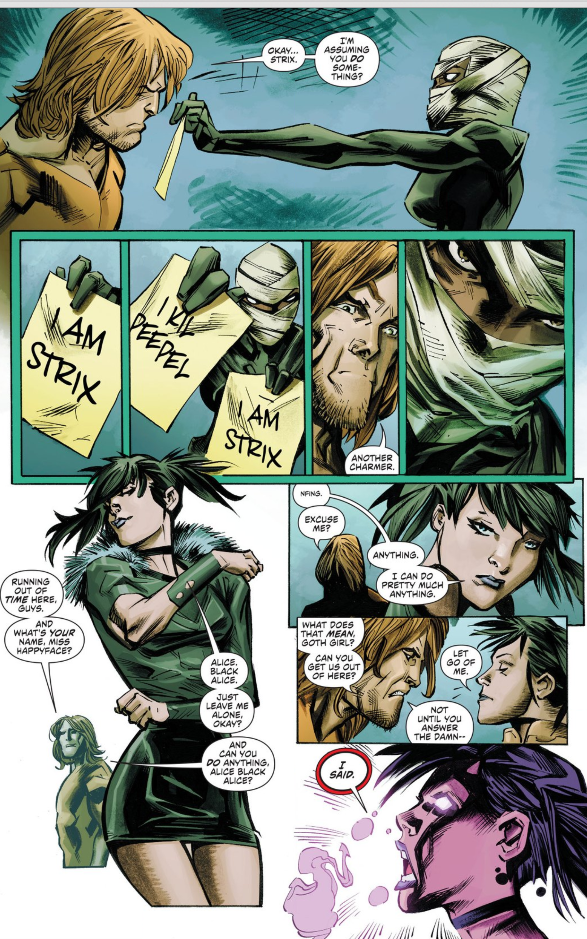 Simone’s readership should be relatively familiar with newer characters like Strix and The Ventriloquist. I have particular affection for Strix’s characterization in Batgirl Annual 1 and her almost childlike interactions with Catwoman. I’d like to see her darker history as an assassin for the Court of Owls further explored in future issues. The Ventriloquist also appears in Simone’s Batgirl run and seems better suited to a macabre tone like Ragdoll in earlier issues of Secret Six. Did I happen to see his mask laid out on the table or was that just wishful thinking? My anticipation is so high that it may eclipse the current issue’s twenty-page limit. This series has the potential to transform minor characters into loveable underdogs and fan favorites. Here’s hoping it can win over new readers and get out from under its own shadow.