Spencer: When you read enough comics, you start to see certain repeated themes and styles emerge among various writers. Brian Michael Bendis is known for dialogue-heavy, somewhat decompressed comics. Kieron Gillen makes no attempt to hide his musical influences and knack for clever dialogue. Geoff Johns loves to rehabilitate long-forgotten or mishandled characters and concepts (and is also a bit infamous for cutting off his characters’ arms). Jonathan Hickman, meanwhile, is probably best known for his cerebral, somewhat detached style of writing that can spend years setting things up before finally letting all the dominos fall into place. With this week’s Avengers 39 we’re getting closer and closer to the end of Hickman’s Avengers epic, but the most interesting part of the issue is the commentary Hickman seems to be making on his own writing style.

After an eight-month time-skip and half-a-dozen issues setting up the new status quo, we’ve finally made it to the climatic clash between the Illuminati and Steve Rogers’ S.H.I.E.L.D. Avengers. The Illuminati are severely outnumbered, but with the Hulk on their side, they’re still dominating the battle. Just as Steve gets his helicarrier in position to attack, though, the Illuminati summon a new player — Sunspot’s New Avengers arrive on the scene, ready to resolve things once and for all!

This wouldn’t be a Hickman book if there wasn’t some extra meaning to the action, which is why the entire battle is accompanied by commentary from Mr. Fantastic in the form of a pre-recorded lesson for his gifted daughter, Valeria. Reed’s battle tactics, though, also seem to be a particularly accurate summation of Hickman’s writing style, giving the whole thing a double-meaning; Reed may be sharing his secrets to proper battle-strategy with his daughter, but Hickman also seems to be sharing his approach to writing stories with his readers.

So what’s the first insight? Despite Reed’s longwinded speech, it’s a simple lesson: “Know who you are.” For all its simplicity, it’s a vital aspect of being both a tactician and a writer: unless you know what your values, interests, strengths and weaknesses are, you’ll never be able to concoct a successful plan or a genuine story.

Reed next addresses two different camps of decision making. Some wait and gather information before making a decision, while others prefer to follow their gut, but Reed argues for a healthy balance of the two. A proper tactician should have a plan that can be implemented with precision, but also altered at a moment’s notice; “minimize variables, maximize flexibility.” It’s easy to see Hickman taking this approach when it comes to his own writing; as I mentioned, Hickman is known for his long-term plotting, but the constantly changing climate of the Big Two can wreak havoc on those kinds of plans. Do we think that, when Hickman started plotting his Avengers epic a few years ago, he knew about, say, Sam becoming Captain America, or Thor losing his hammer, or even about Original Sin? We can’t be sure, but those kind of sudden changes are something a comic writer must always be prepared to deal with, and when you’re as precise a writer as Hickman, it has to be extra difficult to change such long-running plans on the fly. Hickman never reveals exactly how he handles this, but it’s clear that maintaining this balance is a vital part of his writing process.

The next point on Reed’s list is the one that seems most pertinent to Hickman’s work, and specifically to how he handles characterization: always remain calm under pressure, even if it means stifling your own emotions. 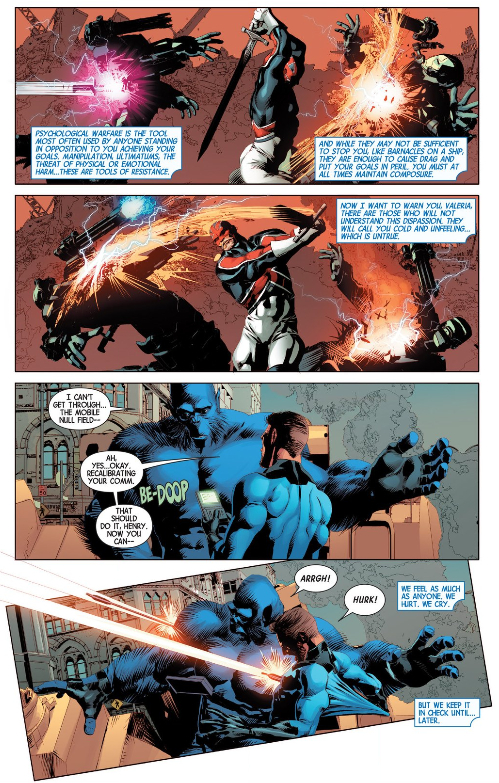 The various members of the Illuminati fit Reed’s description to a “T”; these are the characters Hickman seems most comfortable writing, the Kings and great thinkers who must sacrifice their own wants for the greater good. Considering how dispassionate Hickman’s books can often come across as — especially his Marvel work — this is no surprise. There’s usually enough complex emotion bubbling beneath the surface to overcome any of his books’ emotional distance, but this element doesn’t quite feel present with Steve’s S.H.I.E.L.D. Avengers.

Steve himself is clearly coming from a very emotional place — his mission is so zealous that it’s obviously motivated by hurt feelings over Tony’s betrayal — but the rest of his crew’s motivation for remaining on Steve’s team remains unexplored, despite the attention paid to the group’s defectors and moles. Why did Carol or Clint side with Steve? Does it bother them to hunt former friends? 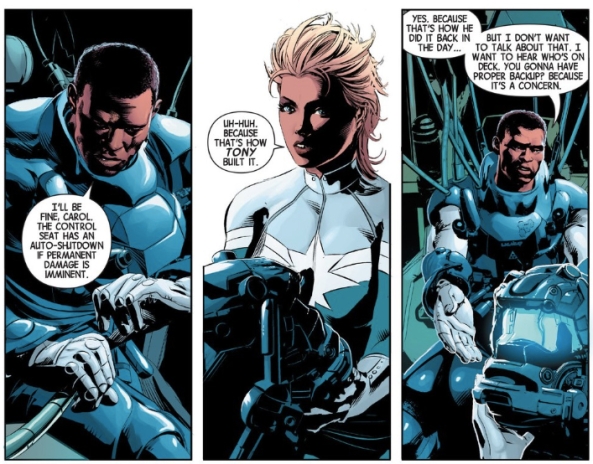 Hickman touches on this slightly here — Rhodey and Tony used to be best friends, and that clearly bothers him — but quickly brushes their feelings aside. I get the feeling that Steve’s Avengers are burying their emotions to remain calm under pressure much in the same way as the Illuminati do. The strategy isn’t as successful for this particular group of characters, but it’s unclear whether this is just a result of Hickman’s style or of it’s a purposeful choice.

Then there’s Sunspot’s New Avengers. This team practically bleeds emotion — Avengers’ only romance even forms the core of their roster — and their plan to help their warring friends come to a compromise may represent a situation where emotion is more important than remaining stoic and composed. In terms of this issue’s meta-textual narrative, I can definitely read this as an admission from Hickman that his particular brand of detached narratives might not be the best approach for every story. Actually, despite all of Reed’s advice, that might be the issue’s most useful tidbit for both writers and tacticians alike: always remember that your typical approach will not be appropriate for every circumstance, and be ready to admit that if it’s the case.

Mark, this is a pretty specific and conjectural reading of Avengers 39, so I’m curious to see if your approach to the issue hit on any similar themes, or if you got something entirely different out of it. Also: are you happy to have Mike Deodato back on art? It’s been a while since he last penciled an issue of Avengers.

Mark: That’s a really compelling analysis of this issue, Spencer, and one that’s much deeper than the more surface level reactions I had coming in. Whenever there’s meta-textual commentary in any piece I wonder how much of it is intentional. I know that authorial intent is generally considered irrelevant, and that whether Hickman intended this issue to double as commentary on the creative process is moot. Still, when reading something like this I’m always curious as to how much the commentary was intended and how much of it is just a byproduct of ideas that are occupying the author’s thoughts while they write.

For me, it’s been interesting to read Hickman’s run on Avengers in tandem with the popularity explosion of the Marvel Cinematic Universe’s version of these characters. Kevin Feige and Marvel Studios have built an empire with more light and adventurous films as compared to the heavy DC films (we’ll ignore Green Lantern, just like Warner Bros.). At the same time, the Avengers’ comic book counterparts have been embroiled in the kind of Pantheon of Gods storytelling typical of DC’s Silver Age comics.

That these two vastly different versions of the same characters exist is a testament to the flexibility of comics as a medium (and to be sure, the more-like-the-movies titles are still around). Comic books rightly have a reputation for being pulpy and, often, flat out bonkers. But just like any art form — be it novels, or television, or movies — there are a lot of interesting and challenging ideas among the pop products.

Avengers 39 is a great microcosm of Hickman’s take on the Avengers. These are tortured, seemingly fundamentally unhappy characters waging war against their friends. Their burden is heavy, and the weight of the world is on their shoulders. Hickman seems to view the old guard, whether allied with The Illuminati or S.H.I.E.L.D., as fundamentally unsuccessful at their job.I mean, the message from Reed’s daughter is literally “You Can’t Win.” 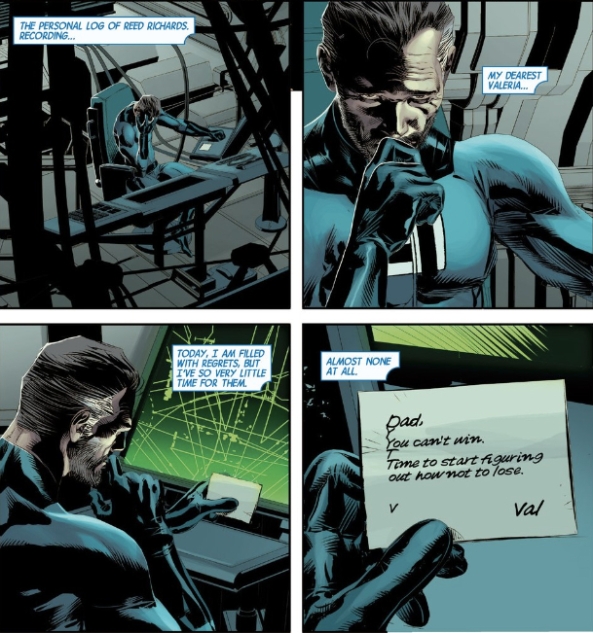 No surprise that it seems to be up to Sunspot’s New Avengers to intervene and clean up the mess Reed Richards and Steve Rogers are creating.

Deodato’s art is a great compliment to Hickman’s writing this month. This is a wordy, heady issue (aka a Hickman book) with much of the “dialogue” consisting of Richards’ lesson to his daughter. It could be claustrophobic or stale without Deodato’s well-drawn action accompanying the words. The coloring also helps reflect the state of the world: muted, drained of bright color, and worn. Steve Roger’s looks like he’s a million years old, but with all of the stress how could he not? 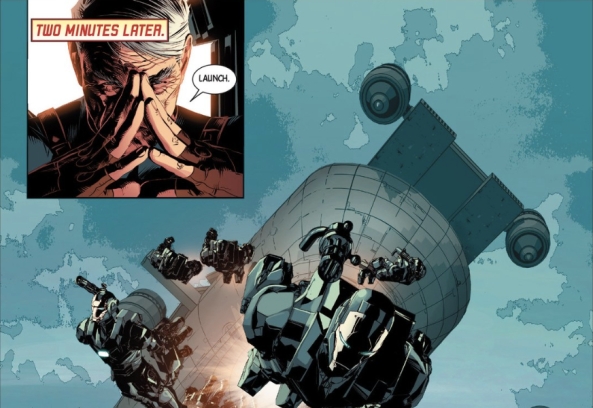 To return to a previous thought, one of the bummers of the MCU is that there are only so many stories that Feige and company will be able to tackle on film. For example, I’d love to see a WWII-set Howling Commandos movie, but the realities of time and money mean we’ll probably never have the opportunity. If one of Avengers 39‘s themes is that a certain tactic might not be appropriate for every situation, I’m grateful that storytellers like Hickman have the medium of comic books in which to tell stories that could never exist elsewhere.