…for us and for our salvation, He came down from heaven: by the power of the Holy Spirit, He was born of the Virgin Mary and became man. For our sake, He was crucified under Pontius Pilate; He suffered, died and was buried. On the third day He rose again, in fulfillment of the scriptures; He ascended into heaven and is seated at the right hand of the Father.

Patrick: Growing up in the Catholic church, I always had a little bit of a problem with this part of the Nicene Creed. On the one hand, it’s very clear: Jesus sacrificed everything — including his life — in order to save the whole world from sin. But on the other hand, death didn’t share any of the long-lasting consequences it does for anyone else. Jesus died, but then he returned, three days later. What’s more is that he transcends his human flesh and embraces his fully divine nature by hanging out with God in heaven. While the drama of death and resurrection is enough to stir a body to faith, it betrays a fundamental truth about death. What’s hard about death isn’t that someone dies, it’s that they stay dead. And yet, this narrative — of death and rebirth — is so powerful it’s one of the stops on Joseph Campbell’s hero’s journey. Batman and Robin has allowed Bruce Wayne to deal with Damian’s death in grounded, real ways for almost two years, but now that “resurrection” is in play, subtlety goes right out the window. This is Damian, the bat-Christ-figure to beat the band, and he only marches back on the field to fireworks.

The comic book equivalent of fireworks? Splash pages, and plenty of ’em. 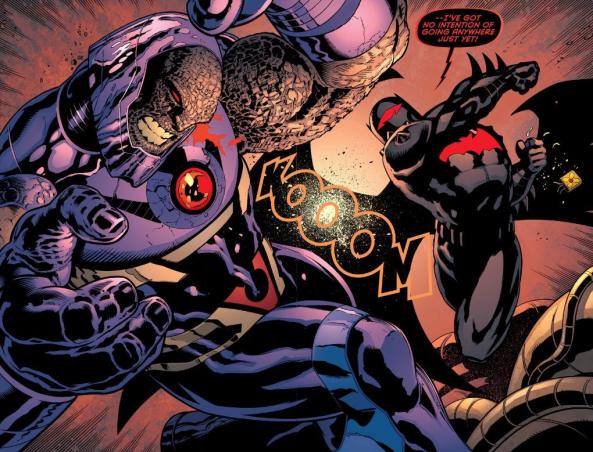 Penciler Pat Gleason is usually fairly conservative when it comes to paneling, allowing writer Pete Tomasi to do some fairly dense storytelling. But storytelling-schmorytelling: we’ve got a good ol’ fashion punch-em-up to read! Every element of this brawl is so well established going in: from Darkseid’s gravitas, borrowed from his appearances elsewhere, to the the nightmarescape of Apokolips we’ve been introduced to in the last couple issues, to that sweet-sweet Hellbat suit. This is an issue that doesn’t spend any time making you care about what’s happening on the page — either you’re tuning to the finale of a saga you’ve held near and dear to your heart for years, or you can get the fuck out.

What follows, then, isn’t so much a series of plot developments as it is a series of iconic images blasted against each other — not unlike Geoff Johns’ finale to his historic Green Lantern run. In fact, if we investigate the paper-thin plot of this thing, it all kind of crumbles under a critical eye. The Hellbat suit is about to fail, until it doesn’t; Kalibak is going to be a problem until he isn’t; the Omega beams should kill Batman, until they don’t; Jason and Tim are overwhelmed by parademons, until they aren’t. The worst offender here is the weird little non-drama between Batgirl and Cyborg. They need to work together to re-engage Cyborg’s Motherbox (ping.ping.ping) in order to escape Apokolips. It ends up being a hilarious little sequences of reversals: none of the problems that pop up have a chance to breathe, so the inevitable conclusions kinda play out in the background while Darkseid talks shit about the Batfamily.

Safely back in the cave, Bruce somehow revives Damian using the Chaos shard. Appropriately, the rest of the family can only respond with stunned disbelief (even Alfred’s English stoicism can’t mask his feelings). 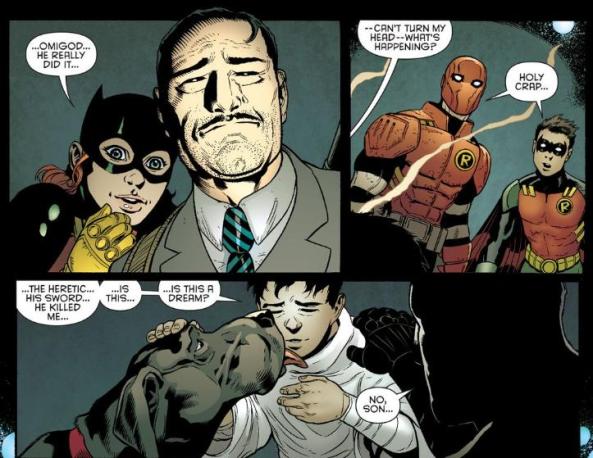 I mentioned in my introductory paragraph how patiently Peter Tomasi has been exploring the concept of Batman’s loss, and I think the change in tone of this issue largely works because of all the careful groundwork he’s laid over the last two years. We can pump our fists and cheer when Damian opens his eyes because we’ve had to sit through the hopeless, often frustrating, reality that he was dead. In the grand scheme of things, the character was dead for something like 21 months — not all that long in comic book terms — but the fact that this series turned into a story of grief, loss and acceptance made the death feel genuine. I’m not convinced I’ll always look back on this moment as a positive turn in the character’s legacy, but for right now, I’m happy to see the little shit up and walking around. He died a bad ass, and now he’s being resurrected as a bad ass. There’s no reason to have expected subtlety in this story in the first place.

Spencer, you can play devil’s advocate — or just straight up disagree with me — if you want. I think you could easily make the case that the story is weak, and the whole issue (and thus the resurrection) suffers because of it. But I still think the raw transformative power of symbols does the job admirably enough. I mean, anytime you can combine the Bat-symbol and a crucifx in one image, you’re hitting on some powerful iconography. 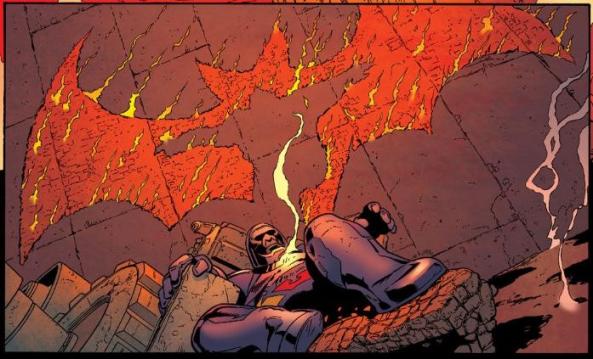 Spencer: Before we get to the issue proper, I want to talk a bit about your opening paragraph, Patrick. Growing up, I was always taught that part of the enormity of Jesus’ sacrifice was that he was an immortal being, the very first of God’s creations, who allowed himself to be lowered to a human form and eventually die. Patrick, you’re right that the death was not permanent, but still, God’s first-born son was no longer in existence for the first time in an eternity, brutally murdered before his very eyes, and that’s a rough loss, now matter how brief it is. Damian’s resurrection is the same — Bruce may have his son back, but that doesn’t negate the loss he felt and the pain Damian’s death put him through at the time. In fact, this new situation may cause problems of its own: Will Bruce just become paranoid of losing his son yet again? Will Damian’s psyche be affected after enduring a brutal death? There’s still consequences from Damian’s death to deal with even if it’s been undone, but you’re right, Patrick, that these issues are very different from the more dark, “realistic” grief we’ve been dealing with over the past two years, which is why Tomasi is wise to turn this arc into a flat-out sci-fi action epic — like you said, there’s no longer any need for subtlety.

(Also, there’s some delicious irony to Batman using the Omega Beams — the very same power that killed him back in Final Crisis — as the means of resurrecting his son, but the effect’s lost a bit to the murky continuity surrounding Batman’s death in the New 52.)

Actually, while I’d love to pick a fight with you, Patrick, I’m afraid we’re in agreement about almost every point you make. I agree that much of the issue is a little narratively shaky — I’m especially in the dark about why the Omega Beam/Chaos Shard combo revived Damian and how Bruce even knew to try it, although I suspect that will be touched upon in Robin Rises Alpha — and there was one moment specifically that struck me as jarring and more than a bit confusing. 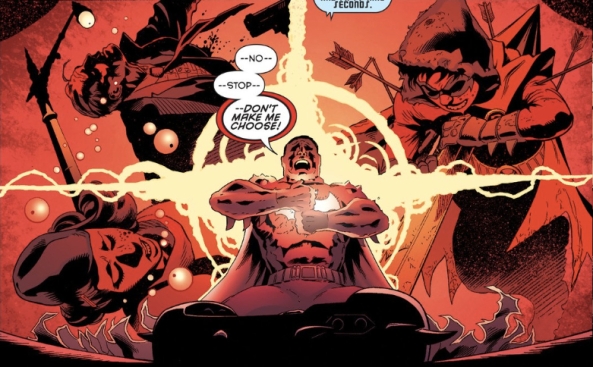 So what exactly is going on here? I mean, I understand that Bruce is faced with the option to resurrect Damian or resurrect his parents (his two greatest losses — sorry, Jason), but I don’t understand why this is even coming up. Bruce’s dialogue makes it sound like the Shard is forcing him to choose, but there’s no other evidence of that or of the shard even having any sort of consciousness at all. I suppose this could just be Bruce suddenly realizing and becoming paralyzed by the choice, but again, it doesn’t ring true — in any other situation this would be a compelling moral dilemma, but after everything he went through on Apokolips we know there’s no way Bruce is going to choose his parents over Damian even if Damian’s corpse wasn’t lying just within arm’s reach. Moreover, Tomasi and Gleason continually ramp up the tension throughout this entire scene only for this one panel to suddenly grind it to a halt; it’s a poor bit of pacing smack-dab in the middle of a scene that’s otherwise immaculately paced, making it all the odder. I think I get what Tomasi was going for, but it doesn’t work; this panel is just a strange digression, a Big Lipped Alligator Moment, instead of the tragic choice Tomasi likely intended.

Fortunately, whatever narrative hiccups Batman and Robin 37 may have are smoothed out by the powerful, dynamic art. I’ve always been a fan of Patrick Gleason’s pencils, but this arc has brought out his best, and he, inker Mick Gray, and colorist John Kalisz continue their hot streak this month. The Hellbat is still cool as all get-out, and the splash pages and spreads are suitably epic; Gleason and company even manage to capture that same scale in the smaller panels, such as the half-a-page sequence of Batman and Darkseid slugging it out in silhouette, their stark black figures standing out even more against Kalisz’s harsh reds of Apokolips. That said, the most vital skill Gleason brings to the table is his interpretation of Damian Wayne. 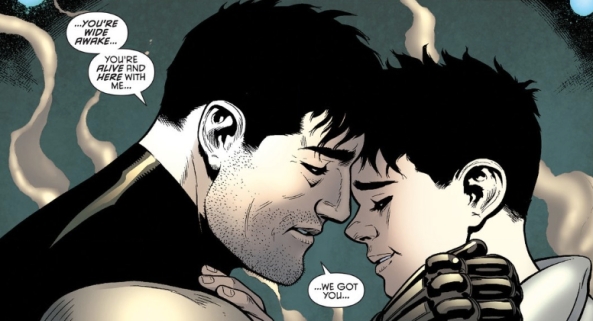 Damian’s had the good fortune to have been handled by a bevy of talented artists in his short existence (Andy Kubert, Frank Quitely, Nicola Scott, Chris Burnham, etc.), but as far as I’m concerned, none have been as important to his development as Patrick Gleason. See, while Gleason is more than capable of bringing out Damian’s attitude and aggression, he also never forgets to make Damian a kid. Gleason’s Damian has the soft features of a ten-year-old, and it humanizes the character in a way few other artists manage. Sure, I can see why Patrick may be a bit leery about Damian’s return — bringing him back just opens up the possibility of screwing up a character who already had an outstanding character arc, ending, and epilogue — but it’s impossible to hold onto that cynicism while dealing with pages like the following. 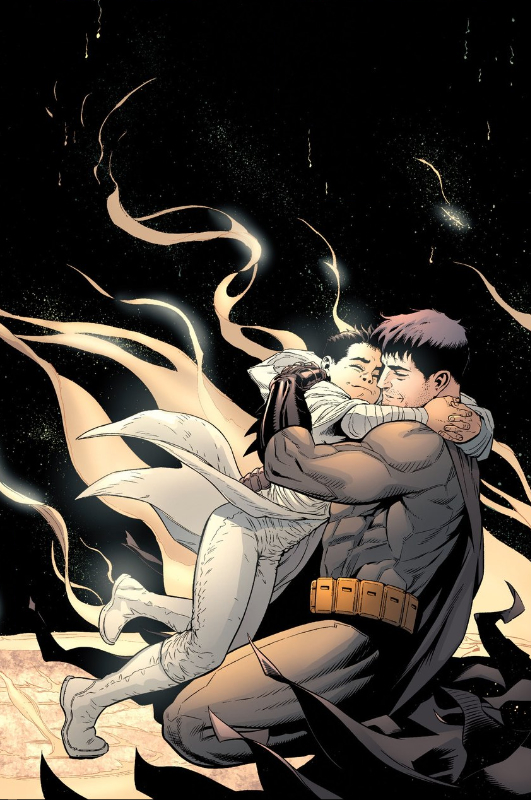 Patrick pointed out a lot of potent symbolism in this issue, but none of it has as much power as Bruce and Damian’s embrace. How can I possibly be against Damian’s return after seeing Gleason’s precious little ten-year-old Robin reunited with his beloved father? It’s impossible, I tell you! Maybe the future will prove some of our worries justified (though I hope not), but for now, I’m just so happy to have this little brat back.