Drew: This is a pretty well-worn axiom of fiction writing, and while I don’t have any qualms with the assertion that good coincidences are bad, I think it’s important to acknowledge that bad coincidences aren’t necessarily good. We’re all familiar with how deflating a Deus ex Machina resolution can be, but I firmly believe that an arbitrary, unlikely problem — a Diabolus ex Machina, if you will — can be just as bad. Actually, it might be worse; while we might understand a writer painting himself into a corner (thus requiring a miracle to get out of it), there’s no such justification for a coincidence up front. The arbitrary rules of sci-fi technology has always been a pet peeve of mine, but as the laws governing time-travel take center stage in All-New X-Men Annual 1, the conflict became a full-on Diabolus ex Machina, derailing what could have been a thrilling, emotional journey.

Eva Bell has landed in prehistoric times and, as the issue opens, finds herself at the business end Triceratops. Fortunately, she’s rescued by a powerful sorceress; unfortunately, that sorceress is Morgana Le Fey. Le Fey is also trapped in the past, and is hoping Eva can get them both out, but first, she needs to crush Eva’s dreams about returning to 2099.

This doesn’t explain why Eva can’t go back so much as it just kind of folds its arms and shake its head. Eva rightfully doesn’t buy it, and skips back to 2099. Sure enough, the future she knew no longer exists, with Tony Stark now filling the role of Sorcerer Supreme. Tony explains that the changed futures are the result of the butterfly effect — essentially, that Eva changed the future when she went to the past. That seems like a legitimate explanation, only it weirdly doesn’t change the “present” — Eva’s time in the past somehow changed 2099 dramatically, but didn’t alter a single one of the events that led to her disappearing from Tabula Rasa back in Uncanny X-Men 17 (which, actually, would be a “good” coincidence, so is just straight-up bad).

Ultimately, I’m not particularly invested in whether or not the rules of time-travel are all that consistent — it’s time-travel, for crying out loud — but I am invested in the characters having some agency. This issue is sorely lacking in that regard, forcing Eva’s situation out of her hands at every turn, not even giving her control of her own time-travel abilities. Having Eva’s return to the present come from some kind of growth, or heck, having it just be a conscious decision on her part, would have been better than having her just bounce around time until some more powerful characters point her in the “right” direction.

As it is, this story is an exercise in misery for the sake of misery. Other characters are motivated by the tragedies of their life, but there’s no indication of what this could even motivate Eva towards. All it does is make her a sadder character — not an inherently ignoble goal, but one that might be better served if her sorrow was driven by something a bit more relatable. I mean, she has an actual family in the present that circumstance is keeping her from — we couldn’t find a way to dramatize that in any meaningful way?

Speaking of dramatized-but-relatable situations, writer Brian Michael Bendis does inject some of that classic X-Men alienation by perplexingly including hominids in his dinosaur-filled past. 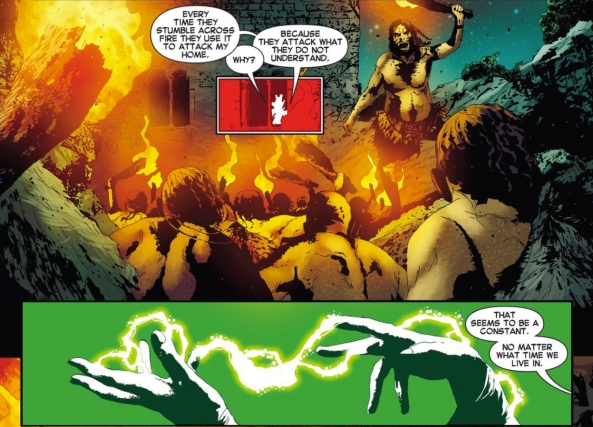 There are so many ways that could have been handled better — not the least of which is advancing the story 65.8 million years so there might have actually been people around — but my biggest gripe is just how ham-handed it is. I’d happily overlook a 66 million year discrepancy if it helped tell an interesting story (again, I’m already accepting a girl who can travel through time with her mind), but this is dropped in so abruptly and forgotten about so completely that every part of it feels as shoehorned as the notion of humans cohabitating with dinosaurs.

Patrick, I was surprised to dislike this issue as much as I did, but it really didn’t feel like Bendis had anything to say. Were you able to find any more to hold onto here? Maybe a commentary on not returning to worlds we artificially create (perhaps some kind of manifesto on the predicted end of the Ultimate Universe)? Or were you too distracted by all of the time-travel mumbo jumbo to draw any coherent conclusions, too?

Patrick: I mean, it might be faulty to consider any of the time travel mumbo jumbo of worthy of any kind of scrutiny. What Bendis does seem to be exploring in this issue is how heartbreakingly mutable every single thing is in our favorite superhero comics. You’re right that it’s narratively weak to say that one time period is arbitrarily subject to the butterfly effect while another, earlier, time period is not, but it’s in service of an idea that I know a lot of people find frustrating. The X-Men (and the rest of the Marvel heroes) are always jetting off to some distant future, and there’s very little which holds those various futures together. The future of Avengers and New Avengers might be internally consistent, for now, but they share no details with Bendis’ future X-Men from Battle of the Atom. This little Eva Bell mini-series takes us to two separate versions of 2099, which is supposed to be an oasis in the Marvel time-stream, an established constant, and yet it proves to be just as mutable as the Age of Ultron or the administration of President Dazzler.

That’s still a pretty cerebral exercise; justifying many possible fictional futures is the narrative luxury of a reader or writer already strongly invested in the present. Where the idea becomes more emotional for me is where the present reveals itself to be just as subject to change. Consider the choice of Tony Stark as Sorcerer Supreme.

That character is currently in a state of weird flux (flux that we didn’t respond very well to), and there’s literally nothing we — as readers — can do to change that if we want to be invested in these characters and this universe.

So I guess what I’m saying is that I feel that Eva’s journey is more sympathetic because it mirrors the reader’s crummy experience reading comics. Nothing that you love is sacred, and forces beyond even the control of the forces beyond your control can lead to frustrating losses and confusing changes. Drew, I’m totally with your assessment that this issue does that to the reader as well, and I’m just as unsatisfied with that as you are, but I walk away from these two annuals feeling as though Eva Bell and I are now battle-buddies. We’ve seen some shit, yo.

And some of that shit is beautiful thanks to the always mind-expanding art of Andrea Sorrentino. I love the page wherein Tony explains Eva’s predicament. It’s got way too much copy on it, but I love the way Marcelo Maiolo uses a slowly refracting color palette to express the branching paths that lead to Eva’s infinite possible futures. There’s so much quick, sad storytelling here, I wish it wasn’t intruded upon by Tony blah-blah-blahing about time travel.

Oh, and maybe Eva and Morgana were in early human-times, but also in the Savage Land. That solve that problem for you? NEVER FORGET THE SAVAGE LAND.