Spencer: It takes more than blood to make a family. I have great aunts and uncles I barely know, a few cousins I’ve never even met — they may be my relatives, but as far as I’m concerned, they’re not my family. No, family is forged in many different ways, but almost all of them involve either large quantities of time spent together or a unique shared understanding of life. Forever has never received either of these things from the rest of the Carlyles, which makes it all the more strange that her first real familial connection amongst them is made with Jonah, the brother who tried to kill her. Yet, that’s exactly what happens in Greg Rucka and Michael Lark’s Lazarus 14, and the consequences of their newfound connection looks like it will only make Forever’s life even tougher in the future.

Forever has retrieved her traitorous brother Jonah and is ready to kill him, but for just a moment lets her rage get the best of her, leading to the issue’s first shocking revelation:

Okay, we knew this already, but it’s obviously a complete shock to Forever. Her expression in that last panel shows just how hard the information really hits her; Johanna’s been awfully chummy with Forever since the incident with Jonah, and the realization that this closeness is probably just another manipulation on Johanna’s part as opposed to genuine affection has got to be hitting her hard. Still, it’s to Forever’s credit as a brilliant tactician that she pretty much immediately realizes that Jonah is telling the truth and shifts her suspicions about that mysterious text she received back in issue four onto Johanna. Of course, pressing the issue with Jonah leads to a second, even more shocking revelation for poor Forever:

And here’s the moment where Forever and Jonah finally start to understand each other. If there’s one thing the Carlyle children have in common, it’s that their father doesn’t really love them. Sure, Rucka has made it abundantly clear that Forever is Malcolm’s favorite, but that’s only because she’s obedient and efficient; he doesn’t love her — or any of her brothers or sisters — in the way a father is supposed to love his children. In a way, all of Malcolm’s children are tools, it’s just that, in contrast to Forever, their uselessness as leaders or even political pawns has led to Malcolm’s deep disappointment in them.

Forever can’t help but to see a little of herself in Jonah, which eventually leads to her disobeying her father’s orders by sparing Jonah’s life and helping him escape. For all the compassion that’s undoubtedly involved in this decision, though, it also seems to be a purposeful, even spiteful act of rebellion. After all, Forever just discovered that the man she’s loved like a father engineered her in a lab as a tool, pumps her full of medicine to ensure her obedience, and is essentially incapable of returning her love in the way she desires. She has every right to be angry, but even her anger can’t shield Forever from the continual reminders of who and what she really is. 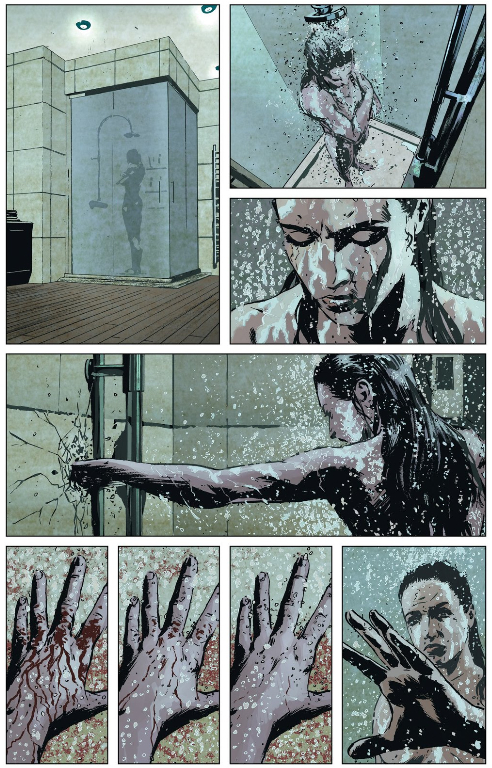 Lark leaves Forever’s emotions in that final panel a bit ambiguous, but what’s absolutely clear is that she’s not happy — her rapid healing is just one more permanent, inescapable reminder of the way she’s been custom-built by Malcolm, and there’s nowhere she can go and nothing she could do that could change that.

Those pills, though, are another story entirely. James already has them laid out waiting for Forever when she returns from her mission, and she simply can’t contain her repulsion when she sees them.

But while Forever is helpless in so many ways, those pills are a way she can fight back. It’s important to note that, while Rucka and Lark direct our attention to them twice, we never actually see Forever take the pills before heading down to the Conclave. It this a subtle act of rebellion on Forever’s part? If so, will it lead to even larger ones?

This is an important question to keep in mind as the issue continues and Forever quickly finds herself in an unwinnable scenario. As Malcolm Carlyle and Jakob Hock’s dispute over Jonah’s death and the theft of Malcolm’s longevity serum grows more heated, the various families decide that the only possible way to settle things is with a duel between Lazari — and for Forever, this means facing Sonja Bittner in a fight to the death!

Forever may have bonded with Jonah, but long before he managed to grow some humanity Forever could only really relate to her fellow Lazari, such as Sonja and Joacquim. The old Forever would have been conflicted and pained, but likely would have followed through with her mission, but now that her loyalty — if not her whole world — has been rocked, how will Forever react? Can she really kill one of her only friends out of loyalty to a man who she now knows doesn’t really care about her? Will her little rebellions with Jonah and the pills grow into a much larger, more public rebellion? In the space of one issue Rucka and Lark have somehow managed to turn the entire world of Lazarus on its head, and it’s made for one of the most engrossing cliffhangers in recent memory. I honestly don’t know how I’m going to be able to hold out until next month to see how this all plays out.

Drew, this is an issue focused pretty intensely on Forever’s experience, but in a title as rich as Lazarus I’m sure you could still find plenty of other approaches to take as well. Was there anything you wanted to bring out that I missed? Do you think there’s anyway Forever can get out of battling Sonja? Do you think Jonah washed up on an island with Tom Hanks and Wilson somewhere?

Drew: Now that’s an interesting premise: a second cast away washes up on shore, but has less charisma than the volleyball. Does Tom Hanks just opt to keep to himself at that point? Maybe they divide the island down the middle with a line of palm fronds.

In all seriousness, though, I’m glad that you brought up the pills. That Forever may not have taken them is an intriguing possibility, but for me, the ground actually falls out when Forever reveals the effect of the pills — that she has a physical aversion to disobeying her father. 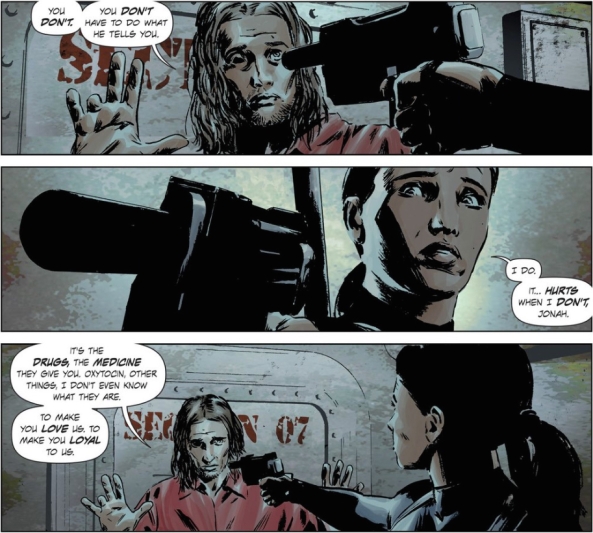 We’ve seen facts rattled off about Forever’s medication, but I don’t think their effects have ever been articulated on such a human level. I mean, here we have Forever, wo we’ve seen endure all manner of physical trauma, complaining about pain with a vulnerability that we’ve never seen before.

Or is it fear?

Whatever it is that she’s feeling, it’s clear that Malcolm’s wishes have an active presence in her mind, even when he isn’t there. He has chemical control over her. It makes any act of rebelion a feat of strength, for sure, but I’m more struck by the parallels to modern society. Rucka has never been shy about the social commentary with this series, and while it can get heavy-handed from time to time, he very smartly brings it in from an unexpected direction here, revealing Forever as the face of the placated masses, so chemically subdued as to be complicit in their own subjugation. That Rucka also manages to give her two true acts of rebellion (plus maybe the pills) in the same issue is a testament to the strength of that parallel — it sings through even as he subverts it only pages later.

Of course, those rebellions don’t mean a whole lot if they can only be performed in secret. Case in point: Forever is almost certainly going to have to fight Sonja. Sonja’s reluctance to volunteer is still the closest thing to a coup the lazari can perform publicly, so I suspect they will fight, Forever’s medications notwithstanding. Fortunately, these are lazari we’re talking about, so a battle to the death is about as high-stakes as a pick-up game of basketball. Though I suppose I’m assuming the title of “lazarus” means Sonja can rise from the dead, just like Forever, but given the talk around the Carlyles’ medical advancements, maybe they haven’t reached the likes of the Bittners. That Sonja could actually face death would certainly inject some drama back into the situation, making the conflict between Forever’s loyalty to her friend and her faltering (though chemically-enhanced) loyalty to her father.

That’s a hell of a note to end the issue on, but I’m afraid I’m going to have to highjack our discussion to sing Lark’s praises one last time. This series always affords him space to flex his skills with a pregnant pause — Spencer noted how ambiguous Forever’s reaction was above — but this issue gave him a little more room to show off his full range, from the bigness of Forever shouting down Jonah to the delicateness of Sonja’s shoe-gaze as she hopes someone else steps forward first. As much as I love Rucka’s plot machinations and their allegorical significance, the real story of this series continues to play out in the subtle body-language and fleeting glances of Lark’s artwork. Few series are so comfortable giving all of that subtext to the artist, which speaks to the strength of this collaboration. It’s a match made in heaven.