Once upon a time…

Drew: Where would you say your story begins? Your first memory? Your birth? Your conception? Your parents’ first date? Their births? It’s easy enough to trace that back ad infinitum, as the circumstances that allowed you to become the person you are were set in motion at the very dawn of time. The same could be said of when your story ends. Is it your death? The death of the last person who knew you? Perhaps your mere existence influences events until the very end of time. Obviously, the scope of an individual story tends to be a bit narrower — infinite context is rarely necessary or informative — but what about the scope of all stories? The folklore origins of Fables have always given the characters a certain vintage of origin, and the modern-day setting gives them a certain end-date, but issue 148 finds important context stretching further in both directions, effectively widening the scope of the series to the narrative arc of the entire universe.

Much of that comes from the backup, which cleverly features notions of eternity, the death of the universe, and the creation of another as a creative act. The story finds Jack captured and condemned to hell, but he uses this as an opportunity to compose an entirely new universe — right down to “the path and fate of every particle” — a fantastical escape from the drudgery of his day-to-day existence. That’s a fitting celebration of both story and storyteller, which would be self-aggrandizing if it weren’t for the fact that Bill Willingham didn’t write this particular fable. Matthew Sturges is the credited writer, making the back-up all the more meaningful as a tribute to the remarkably intricate world Willingham has created over the past 13 years.

I could go on at length about the back-up, and while it provides an audacious ending to the universe Willingham has crafted, the end of the story he’s telling is still falling together in the feature. This issue finds us mostly focused on the story of Rose and Snow’s mother, Lauda, who we learn was in a similar battle for power with her 11 sisters long before the events of Fables 1. Not wanting to kill or be killed by her sisters, Lauda opts to tap out of the fight altogether, acquiescing her power (and the hoarded power of her five murdered sisters) so long as she’s allowed to live. Obviously, Lauda survives (at least long enough to give birth to Rose and Snow), but we notably don’t see the end of the story.

Lauda’s choice of “none of the above” certainly feels at home in the world of Fables, but so would a feint of “none of the above,” so I found myself reluctant to trust her. It certainly seems like she could be behind all of the murders, and may be making a strategic play here to have her sisters winnow their numbers down before she rejoins the fray. I mean, she certainly ends up with magic, right? Presumably, that’s why Snow and Rose are in their current position. The rules of family magic and sorceroricide still aren’t entirely clear, but we know enough to understand that there is some kind of precedent that demands that there be only one survivor, emphasizing the central conflict of this arc.

Speaking of Snow, this issue finds her having a horrible vision of Bigby that suggests he’s going after their children. 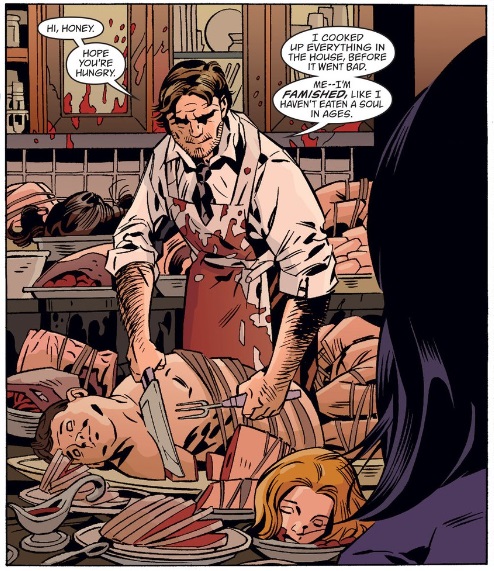 Or is he? Unless Rose is consciously directing him, he may be acting of his own volition, which might mean he’s not out for blood, but a simple reunion. That’s totally conjecture — and may not matter, depending on how quickly Snow acts upon arriving at the cottage — but the thought that there may be a happy ending for him, after all, is too pleasant a thought for me to let go of. But, then again, Bigby’s death may be the one thing that could motivate Snow to kill Rose. How necessary that killing ultimately is — maybe they could actually deploy Lauda’s gambit — remains to be seen, but things seem to certainly be going in that direction.

Patrick! As usual, there’s too much going on here to effectively summarize, but that means we’ve got plenty to talk about. The most pressing question in my mind, though, is what elements of Jack’s world would you change? Pet dinosaurs seems pretty solid to me, but I’m less sold on the taco trees — not that I dislike tacos, just that I’m not sure I’d want to ever eat an under- or over-ripe taco.

Patrick: Maybe I just don’t like human beings referred to as “in heat,” but Jack’s mandate that all the women are “in heat at all times” makes my stomach churn. I mean, all times? All times? Jesus, man, when’s a guy supposed to sneak away to write about comics?

But maybe it’d all be worth it to be around to witness the heat death of the universe. That’s like the The End that no other The Ends can hope to measure up to. Jack and Gary get to go on past this point, into a new reality, one that requires active creation in order to exist. The irony there, of course, is that the story that’s ending also needed active creative input in order to exist. The story closes with an omniscient narrator — possibly an editor — telling us what to expect in the next issue:

Next: There is no next! Didn’t you read the title? It’s the very last Jack of Fables Story of all Time! Stop trying to live vicariously through me and go get your own life.

That last little challenge is amazing, and sparks so many questions about who’s saying that. Sturges? Editor Shelly Bond? Somehow Jack himself? And at by this point in the narrative, Jack is basically synonymous with the author anyway, so any distinction we try to make is pointless. The message is the same regardless – even if this story theoretically goes on to infinity, we have to stop reading it at this specific point, so we better find something else to do.

Drew, I love that you’re formulating theories about Lauda’s supposed innocence in her sisters’ tontine. I think the fact that both you and I want to discuss it highlights one of the central conceits of this series, and one that this issue demonstrates so well: mainly, that stories have more value than non-stories. What’s the point of getting all this information about Lauda and her sisters? It’s unclear. Maybe there’s a lesson to be learned from her abstention from violence. Or it could be that the cricket is simply setting up the first half of a story that will convey some vital piece of information to Rose in the moments before she has to challenge her sister. I’m much more enamored with the idea that there is no purpose for the story beyond the inherent value of story. It’s a compelling look at successions of power and disintegrating loyalties within a family. That’s what Fables is so good at – telling good stories, and insisting that those stories are more than the facts presented within them.

Also, hilariously, Willingham takes this opportunity to force Mark Buckingham to draw Lauda and all twelve of her sisters. It makes for some packed panels and full rooms, but Buckingham pulls it off with the same kind of grace you’d expect from someone who had been drawing these women for decades.

Of course, he hasn’t. Buckingham’s real fireworks are reserved for the final pages of the issue as Snow is called into battle – possibly for the last time. I’m including the whole page, because the composition is breathtaking.

Snow’s not even the largest figure in this panel — both Cole and some of those crows are bigger than she is — but the swirl of feathers around her draw all the reader’s focus to the center of the page, where Snow’s determined face is just waiting for us. I also simply love the juxtaposition of colors here – Snow’s standard border is warm and yellow, but the action plays out among the cool blues of night. It’s so fucking dynamic, especially when you consider that it could have been a dark, drab nighttime scene. Great choices from colorist Lee Loughridge there.

I can’t help but be excited and horrified about how this will all end. And I think that’s part of what Lauda’s story does accomplish –again, not that I think it needs to accomplish anything — we’re able to see a sisterly fight to the death play out in miniature between characters we haven’t invested 13 years into. It’s like emotional training wheels for what’s about to come. Something tells me, we’re going to need the practice.