Patrick: How many different police procedurals are on TV right now? Like a billion. (Don’t check my facts on that.) They’re all basically the same, and you can usually determine whodunnit by the order the characters are introduced (or by who’s the most prestigious guest star), so what’s the difference between them really? Perhaps intuitively, it’s the detectives themselves that make or break a detective show. The light sci-fi premise of The X-Files might have sold the series, but it’s the personalities of Fox Mulder and Dana Scully that give the series staying power. Tim Seely’s new series, Effigy, works extra hard to give us a clear and unique vision of our detective, so by the time the mystery finally hits, we’re already invested.

The issue starts off like a visit to someone else’s childhood, as the climax of an episode of Star Cops plays out on the page without commentary. From the brief glimpse we get of the show, it looks like a sugary action show, with healthy doses of Power Rangers-esque open brawls and mindnumbingly specific science fiction details. The hero team is made up of a science girl, an ass-kicking girl, a robot, and some kind of adorable dog-person. In short, it’s a perfect amalgamation of every show you loved when you were little, but couldn’t possibly defend articulately to the uninitiated. Which isn’t to say that Star Cops is without it’s charms — the cute things are cute and the kick-ass things do kick ass, but there was definitely a moment during these first couple pages where I had wondered what I had gotten myself into. Writer Tim Seely and artist Marley Zarcone present Star Cops without any hint that we’re watching an in-world television show.

That’s particularly bold because we’re not even aware that there is a “world” for a television show to be in yet. The smash cut to the present is jarring — not only is our hero no longer a child, she’s no longer… well, a hero. In fact, she’s hardly even the actress who plays the hero. We may have first seen her four pages previous, but this is our introduction to Chondra Jackson.

She’s a humble cop, trying hard to make a clean break from her shallow, shallow past. What makes it impossible, of course, is that everyone judges her based on that past, which includes a sex tape that Chondra herself leaked to the press. Interestingly, this is the only time that the reality bends a little bit and Chondra addresses the audience directly, to sort of explain away the sex tape.

This is all before the mystery of series is even established, so it’s interesting that Seely decides to throw the breaks on here. She can quietly take the abuse of her fellow Effigy Moundians, offering no to-the-camera explanation for why she spoke ill of her home town, or how she let her career spiral out of control, but the sex tape? That requires an answerin’ fer. It’s a little bit icky that this is her trigger for breaking reality, imposing a morality on the character that she herself doesn’t even seem to share. In fact, everything around the sex tape is weirdly shoe-horned in, right down to how it’s introduced. Hey, if you want to make known the existence of a sex tape, you couldn’t find a much more a appropriate messenger than a pale pervert in trucker hat with an ill-fitting “Free Breast Inspections” t-shirt.

If Seely’s a little too eager to put this detail out into the world of Effigy, it’s probably just to characterize Chondra’s mother, who, as it turns out, is the worst kind of pretentious Hollywood stage mom. Chondra’s mother is shallow, stupid, and perpetually dissatisfied, and stands it stark contrast to our hero, who seems to be actively repelling those aspects of her own personality.

And poor Chondra just isn’t going to be able to escape her past, is she? I love that there’s so much friction between the idealized Star Cops that we see in the first couple pages and the smug, grim reality of Chondra’s life that her mother reveals. That’s all echoed perfectly in the strange details of the case, even if the Star Cops tattoo on the corpse is a bit on the nose. There’s the added mystery — that only the reader is privy to — of who this superfan is, and what role she played in the murder, if any.

I’m all questions at this point, but I feel a strong enough connection to Chondra that I’m eager to have those questions answered. How about you Spencer? Were you hooked by this premise? Did you maybe want to see more Star Cops? And aren’t you worried that that makes you just like that mystery prostitute, urging her John to “pop” himself? (Gross.) Oh and how about the introduction of Detective Moore? That couldn’t be much cooler, could it?

Spencer: Yeah, I definitely got a kick out of that scene, Patrick. Moore’s laid back attitude about the whole situation is a lot of fun, but I’m just as interested in what the scene tells us about Chondra. 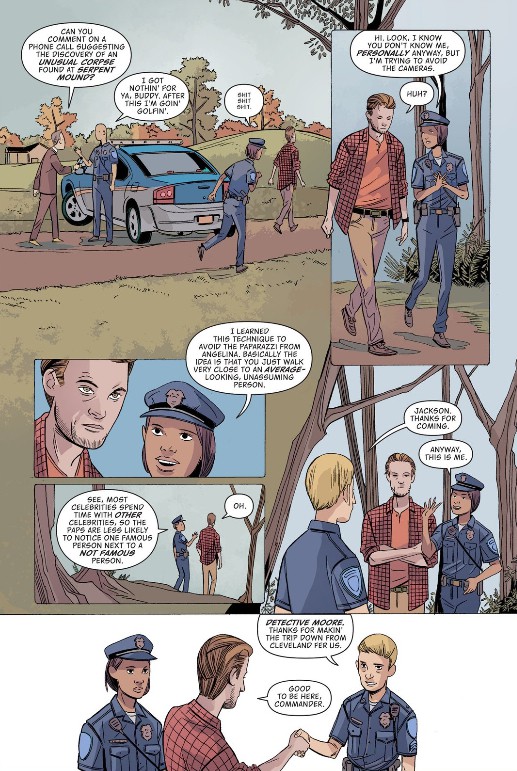 Name-dropping Angelina Jolie is some serious humble-bragging, but at the same time, I don’t feel like Chondra had any malicious or self-aggrandizing intentions. She’s just so chipper and friendly throughout the entire scene that I can’t help but like her, and it’s clear that, for whatever fame she may have acquired and for whatever strain it may have put on her life and her relationship with her home-town, she’s a genuinely friendly, upbeat person trying to just get on with her life.

Artist Marley Zarcone is owed much of the credit for Chondra’s pleasant, likeable presence. Just look at the image I posted above: Chondra’s beaming smile and sincere, upbeat body language immediately tells us that she’s no threat, and if she offends Moore, it’s due more to her being oblivious than arrogant. Of course, by this point Seeley and Zarcone had already put a lot of work into ingratiating the audience to Chondra, mainly via that sex tape scene of all scenes.

Patrick, I get where you’re coming from when you criticize this moment and its handling of Chondra’s sexuality, but as a direct appeal to the audience I love it. Seeley creates an instant rapport between Chondra and the audience by having her address us directly, explaining much of her backstory, emotions, and motives in nine efficient panels. Again, though, it’s Zarcone who sells the scene, choosing the absolute perfect facial expression needed for each panel. It’s a charming page, and almost a bit arresting in the way it catches the reader’s attention and forces them to focus on nothing but Chondra, her life, and her feelings for a whole page. If Seeley and Zarcone never use this device again then it may stand out as an odd moment for Effigy, but in terms of establishing Chondra, it works like gangbusters.

One of the most interesting things about Chondra to me, though, is actually something we don’t know about her yet; I’m curious to find out Chondra’s feelings about being on Star Cops. If we can take the word of the grad student early in the issue, then Chondra was once pretty arrogant about her acting career, but now she seems rather content, perhaps even eager about her new job as a police officer. Likewise, Chondra went through a lot of trouble to extend her career once Star Cops ended (the aforementioned sex tape), but that seems to be more of what Chondra’s mother wanted, not Chondra. How Chondra herself feels about Star Cops is a blank spot on an otherwise surprisingly fleshed-out character, and if it seems like I’m paying a lot of attention to it, it’s only because every other character in Effigy is so strongly defined by their relationship with Star Cops. Take Chondra’s mother, for example:

Her dining room alone is decorated with two prominent Star Cops props. Of course, I highly doubt Chondra’s mother cares for Star Cops’ content; to her Star Cops is more of a symbol of the prominence she and her daughter once shared, and which she obviously hopes to one day enjoy again. In contrast, the other citizens of Effigy Mound seem to view Star Cops as an annoyance, if only because it’s a reminder of Chondra’s supposed snubbing of her home town. Further in this direction lies Laurence W. Lauritz, whom the issue implies is the creator of Star Cops, and who seems to hate the series so much that he’d rather pee on a three million dollar check than accept royalties from it.

Then there’s the superfan, who is also the mysterious prostitute Patrick mentioned. The graphic nature of this scene is rather shocking (and I’ll admit that this scene is a bit much for my tastes; did it need to be so graphic? Is it really necessary for the fan to be a prostitute? “Prostitute” is an occupation that feels awfully played out in comics), but at least Seeley is using the adult nature of this scene as a contrast to the rest of the title, and especially to the sugar-coated world of Star Cops. 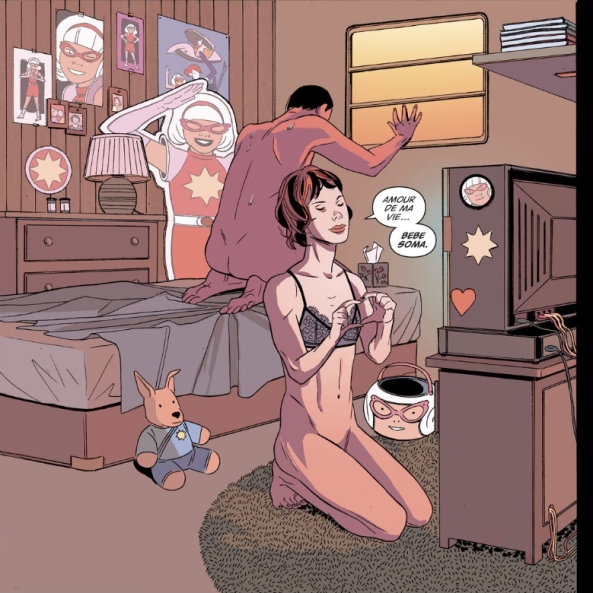 I mean, the Star Cops memorabilia stands out like a sore thumb against the reality of what’s actually going on in that room. Star Cops is so far removed from reality that it seems like it shouldn’t have any bearing on any of these characters (much less this one), yet it’s become an omnipresent, defining element in the lives of the entire cast. To Chondra in particular Star Cops is like an inescapable spectre always looming over her shoulder, subtly influencing almost every aspect of her life.

It’s clearly a metaphor for something — an inability to escape the past, maybe? — but it feels a bit early to fully understand the meaning or find any clear answers yet. While I find the emerging themes and fledgling mystery intriguing, though, it’s the instant likability of Chondra Jackson and the pleasant familiarity of her world that will keep me coming back next month. Seriously, Effigy 1 couldn’t be a more confident debut, and I can’t wait to see where Seeley and Zarcone go from here.