Mark: Well, it’s finally happening. DC announced late last week that starting in June, following the events of the Convergence event, The New 52 will no longer exist. Having run for almost 4 years, it’s not hard to understand why as The New 52 branding was getting a little long in the tooth. What does this mean for our favorite characters? Apparently not much, as no continuity reboot is planned. I mention this because when I first read Superman 38 before the post-Convergence announcements last week, I assumed that the two major revelations in this issue were being unloaded now so they could easily be walked back in only a few months.

The first of these revelations is pretty cool: Superman has a new power. After accidentally causing The Great World to explode, killing all of its residents, Ulysses beats the crap out of Superman. This fight ultimately culminates in Ulysses trying to destroy Earth, and Superman using his heat vision to stop that from happening. As Ulysses absorbs the energy from his heat vision, Superman increases the intensity until… 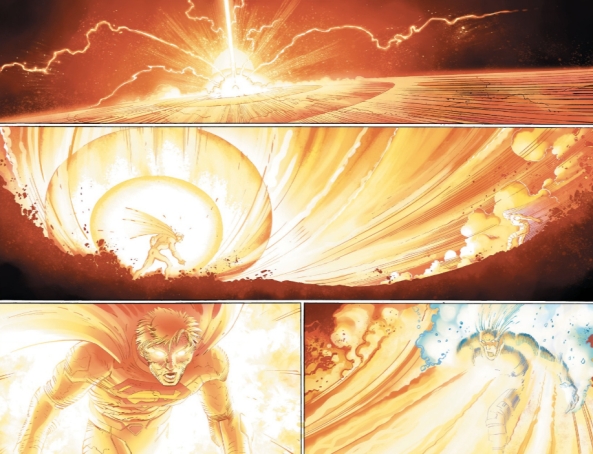 …he unleashes all of his stored energy in one super, solar flare-like detonation. It’s effective in stopping Ulysses, but comes with a side-effect. After essentially depleting his solar energy reserves, Superman is without superpowers for 24 hours (the amount of time it will take for his cells to recharge). Comic book science is always nuts, but I like how this basically makes sense. Like if a solar battery cell released its energy all at once, it would take time for it to recharge. Superman’s basically the world’s coolest solar cell, so, sure, why not?

But the biggest change in the Superman status quo comes at the end of the issue when Clark Kent reveals his true identity to Jimmy Olsen. 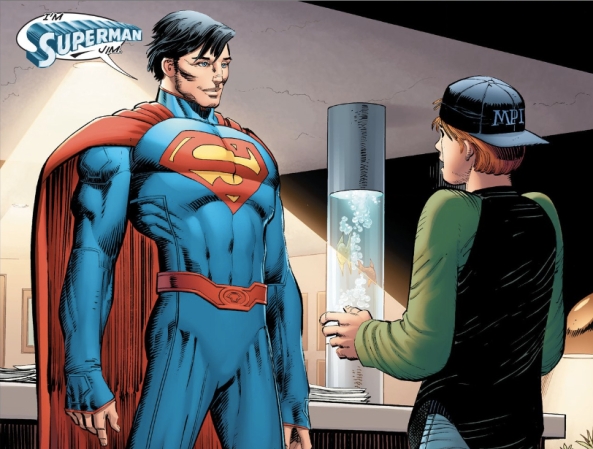 Jimmy just gave away his parent’s billions in an effort to help people in need, and Superman is moved by the gesture. After everything that happened with Ulysses, he realizes he needs a confidant, someone he can talk to.

Here’s the thing though: is it really fair of Superman to burden Jimmy Olsen with this information? I absolutely understand Superman’s desire to have someone to talk to (someone besides Batman, who is not exactly an ideal sounding board for discussions of feelings). And if I were Jimmy, I suppose I’d want to know if one of my friends was Superman. But on the other hand, I assume this puts Jimmy in an insane amount of risk going forward. That’s always the dilemma superheroes face when disclosing their secret identities, right? It’s hard to lie to the people you care about, but at the same time now if Jimmy Olsen gets kidnapped, tortured, or killed because he knows Superman, that’s basically on Superman.

What is happening here? Is he also wearing underwear over his suit? I understand that there may not be a lot of reference art as to what exactly Batman’s area is supposed to look like, but yeesh. It’s a saggy diaper that leaks.

Michael, where do you fall on the very crucial topic of Superman and Batman’s crotches looking all wrong? And also, how do you feel about the rest of the issue?

Michael: Mark I would have to agree that Romita was drawing the characters with their pre-New 52 underoos. The new costume reveal might get Superman a pass for being a mere coincidence, but Batman? Batman’s definitely got them briefs on. As for Superman’s revelation to Jimmy Olsen, I am conflicted. Let me present to you my opposing views on this topic.

Pro-Revelation: Much to my dismay, Superman of The New 52 is a super-loner. Besides Lana Lang (who is more of an Action Comics ensemble member currently) Clark Kent doesn’t have many people in his life that he can truly confide in. True, he has Batman, other League members and Wonder Woman (though that relationship has gone nowhere since it began back in 2012.) But having a close civilian friend of both Superman and Clark Kent know the truth is a great move in my opinion. It makes Superman less isolated and it’s an exciting and different dynamic from anything pre-New 52. 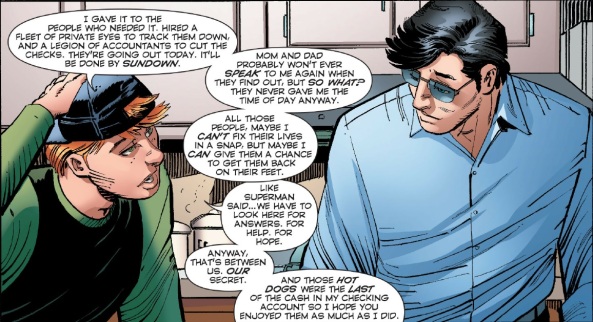 Anti-Revelation: I’ve gotta say I’m extremely disappointed that Geoff Johns is stepping away from the title. The Ulysses arc had interesting ideas but overall was very underwhelming. The fact that Johns tosses in these “big changes” to Superman (new power, new costume and the revelation to Jimmy) only to leave after Superman 39 kind of feels cheap. Moreover, the revelation to Jimmy feels somewhat undeserving because this arc had very little to do with Jimmy. When Johns began his run with Romita in Superman 32, there was a little bit of exposition for Jimmy’s current situation in The New 52, but he was by no means a major player in Johns and Romita’s story. In that regard I’m not satisfied that Johns decided to shoehorn this revelation in at the end of the Ulysses arc.

It seems the crux of this decision for Superman to let Jimmy be a part of his world comes from the fallout with Ulysses. Johns intended Ulysses to be a mirror of Superman, and Superman was hoping that he had finally found a friend that he could relate to. But it was all too predictable when Ulysses showed his true colors and Superman had to take him down in the classic smash ‘em up fashion. So yes, Superman came to the realization that Ulysses wasn’t the friend he thought he could be and that, in fact, his old pal Jimmy was the friend he never realized he needed. While this is something I’m sure we can all relate to, the juxtaposition of Ulysses and Jimmy felt forced to me. It should come as no surprise that Ulysses was never going to be a complete duplicate of everything that Superman stands for; he’s alien (no offense to all Kryptonian, Martian and Thanagarian readers.) Ulysses could never be Superman because though he was born human, he never had the nurturing family that Superman did. That’s the age-old argument for why we can trust Superman: though he wasn’t born on Earth, he was raised here; he’s one of us.

I suppose my problem with this story’s conclusion (beyond the shoehorned Jimmy Olsen bit) is the inevitable turn of Ulysses from potential friend to new enemy. I never believed that the very 90s-looking 4th Dimension-dwelling Ulysses would end up even as a D-list Justice Leaguer. The plot of “new friend turned enemy” is not new, and really not a terrible idea, but Ulysses’ characterization and motivation were childish and silly. Which maybe that’s the point? Maybe the point is that Superman was raised by the Kents and matured to be a well-adjusted young man, while Ulysses was robbed of that chance and in the process became a stunted boy-god. Maybe the cry baby Ulysses is just an updated version of the cry baby Superboy Prime, IE comic book readers? Nah, Ulysses is lame. I’m not Ulysses.