Michael: Back to the Future, The Wizard of Oz, Wife Swap: popular pieces of film, literature and even reality TV. Besides being engaging pieces of fiction (reality TV burn!) they all have an essential plot element that draws us in as an audience: they are all “fish-out-of-water” stories. Marty McFly isn’t familiar with the culture of the ’50s, Dorothy doesn’t understand the strange land of Oz, and one wife doesn’t know how to live in a drastically different home. Since Nameless is a Grant Morrison story, it is over-the-top bonkers and full of heady ideas. At its core though, it is also a story about a fish out of water.

Nameless starts off with our protagonist “Nameless” narrating a particularly bad December where relatively average people seemingly ritually-kill their loved ones. We then find Nameless on an Indiana Jones-ish artifact heist that takes place in a dream world. The artifact in question? The Dream Key of Non Samwohl: “Key to the empty box,” as Nameless’s captor The Veiled Lady puts it. He briefly escapes, but is once again captured by anglerfish-headed henchmen and brought to the “real world” (the waking world). The henchmen try to kill him by drowning him in freezing water, but he is rescued by a mysterious benefactor. Paul Darius is a self-described “billionaut” who seems to have been the one who hired Nameless to steal the Dream Key. Darius tells Nameless that unless he helps him, the asteroid Xibalba will collide with Earth in 33 days and destroy all life. Darius admits that he isn’t really offering Nameless a choice, and the next thing we see is Nameless suited up and ready to travel to the Moon.

Like any introduction to a new world, it is hard to get your bearings at first while reading Nameless 1. “Where are we?” “Who are these people?” “What is going on?” These are standard questions for a foray into any new fictional environment; it’s a fish-out-of-water experience for the reader themselves. It isn’t until Nameless exits the dream world that we get some answers — and understand that the first half of the story took place in a dream world to begin with. Nameless seems to know his way around the mystical dream world — he’s like a blend of Leonardo DiCaprio’s character in Inception and John Constantine. We love fish-out-of-water stories as much as we do because the situation is as foreign to the situation as the audience may be. The audience and the hero learn about the new world and conflict in front of them simultaneously. Sure, Nameless is an occult expert but he doesn’t know the first thing about outer space.

Nameless is brought on by Darius because he is the bridge between the two worlds of fantasy and science fiction. The asteroid Xibalba has the markings of what Nameless calls “The Door to the Anti-Universe;” they are also the symbols found at the crime scenes of the ritual murders at the beginning of the book. Nameless places the fantastic events in front of him in the context of myth and mysticism, so let’s talk myth for a minute. As Nameless says, Xibalba — “The Place of Fear” is the Mayan underworld. According to the trustworthy Wikipedia, Xibalba is home to twelve gods who are responsible for different forms of human suffering. Nameless describes his journey from Earth to Moon as “Malkuth to Yesod.” In Christian Kabbalah, Malkuth is the realm of matter/earth and Yesod is “the power of connection.” Both are points on the Kabbalistic “Tree of Life.” The Mayan Tree of Life is a cross that connects Heaven, Earth and Underworld (Xibalba).

Morrison has always been a fan of mythology and eastern religions, so it’s no surprise that there’s this cross-section of Kabbalah and Mayan myth. With the little nuggets of both faiths that Morrison has provided thus far, our billionauts could end up finding the creator of the universe. Even if that is the case, don’t count on it being as straightforward as that. I predict even more “shit raining down” when we actually see Nameless as a fish out of water on the Moon the next issue. I enjoyed the start of this new series, but there didn’t seem to be enough characterization for Nameless. I mentioned Inception earlier — the “master dream thief” element, combined with the recruiting from an eccentric (and Asian) billionaire smells heavily of Inception. It’s not enough to ruin the experience, but it is worth pointing out.

Having worked so much together on Batman Incorporated for the past few years, Chris Burnham is Morrison’s new Frank Quitely, with his strong character work. Image has billed this as a horror series and so far Burnham is delivering. The gruesome murders at the beginning of the book and the strange Veiled Lady and her fish henchmen are exquisitely creepy. The first time I read through the book I was a little disoriented. Upon a second read, I realized that Nameless’s premise is pretty cut-and-dry thus far. Which is a good place to start, because I’m expecting Morrison to turn the weird level up to 11 as this thing progresses.

Alright, that was a lot — apologies. Drew, what did you think of Nameless 1? Did you get an Inception vibe too? I went heavy on the mythology; did you have anything to say about the art? Did you catch the “dreaminess” of the illegible words on the storefronts?

Drew: Oh man, the art! Burnham is an expert at packing storytelling details into the periphery of the panel (like the storefronts you mention, or — my particular favorite — the police officer running out of the crime scene to vomit while another bags up a human head), but what really impressed me is how he used his paneling to establish the subjectivity of his characters. That is, his layouts are tailored to the characters involved, cuing us in to whose “reality” we’re in. 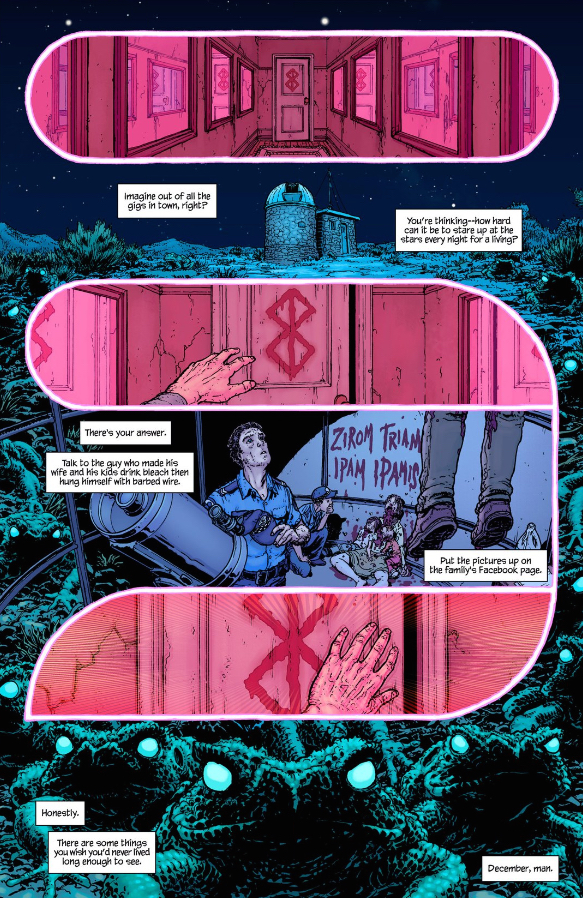 The issue opens with a shot of “The Door to the Anti-Universe” from Nameless’s perspective. Note that it’s set in a rounded rectangle. Burnham repeats that same set-up multiple times as Nameless approaches and opens the door, establishing the rounded rectangle as a shorthand for taking Nameless’s point-of-view.

That shape all but disappears, however, when Nameless is captured (though it is intriguingly projected on the walls of the bedroom he’s held in). Instead, we get straightforward rectilinear paneling, albeit without any gutters, suggesting that the dream world is incredibly fluid. When Nameless is finally brought face to face with The Veiled Lady, we get sharply angled panels, implying the faces of a cube. She’s attempting to cage Nameless within her own personal dream, but Nameless has some other ideas. 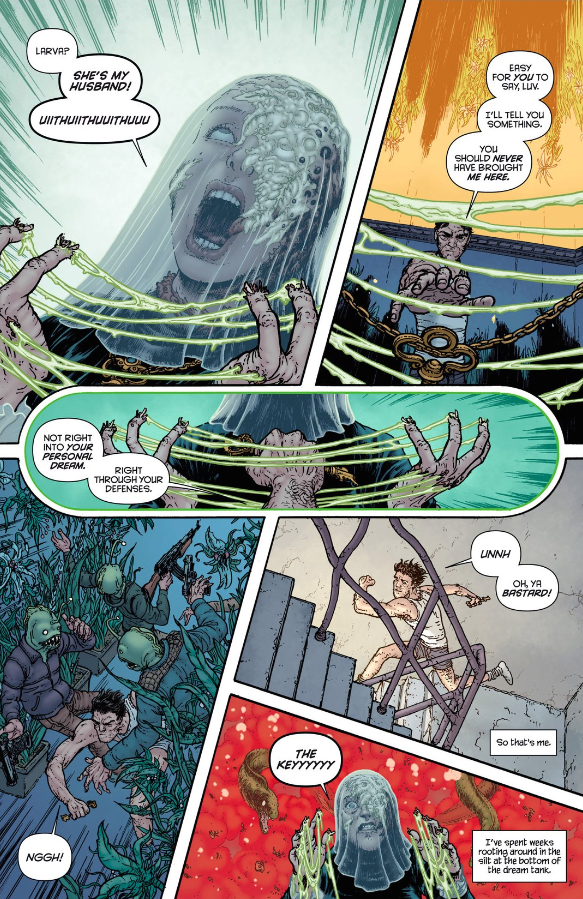 Never mind that batshit first panel (which might just be the Morrisoniest thing that ever Morrisoned), what really caught my eye here is that central, rounded rectangle. We’re taking Nameless’s perspective, for sure, but I think it’s also important to see how that perspective effectively breaks the world he’s in. Burnham isn’t just using the paneling to reflect perspective — he’s using it to show us who wins the scene.

The rounded rectangle all but disappears from that point on, as Nameless is never really in control again — he’s recaptured by the henchmen, recovered by Darius’ men, and enlisted by Darius — except for one small exchange about the key. 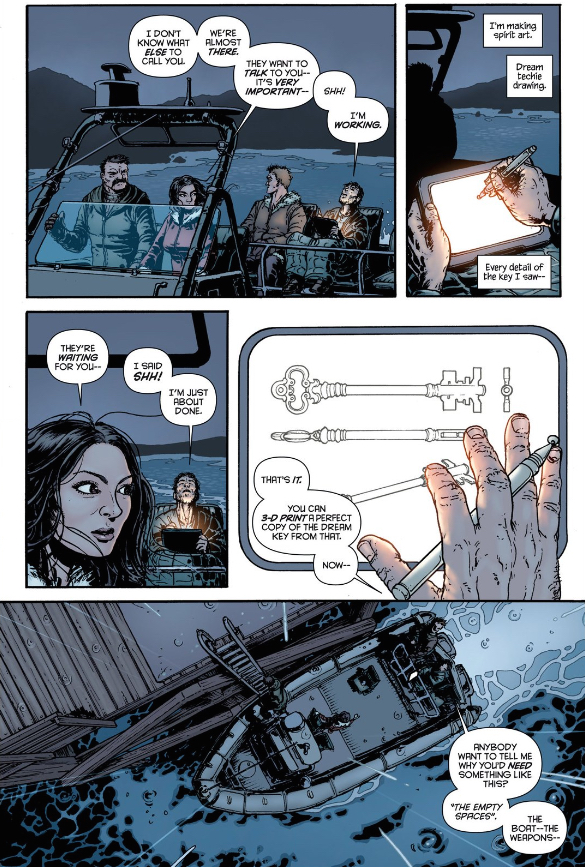 We get one last rounded rectangle, which is again both from Nameless’s perspective and features Nameless in control. It’s a fun little runner that cues us into who Nameless is and what he cares about.

Of course, his perspective is literally put on its head when Darius explains why he’s here. 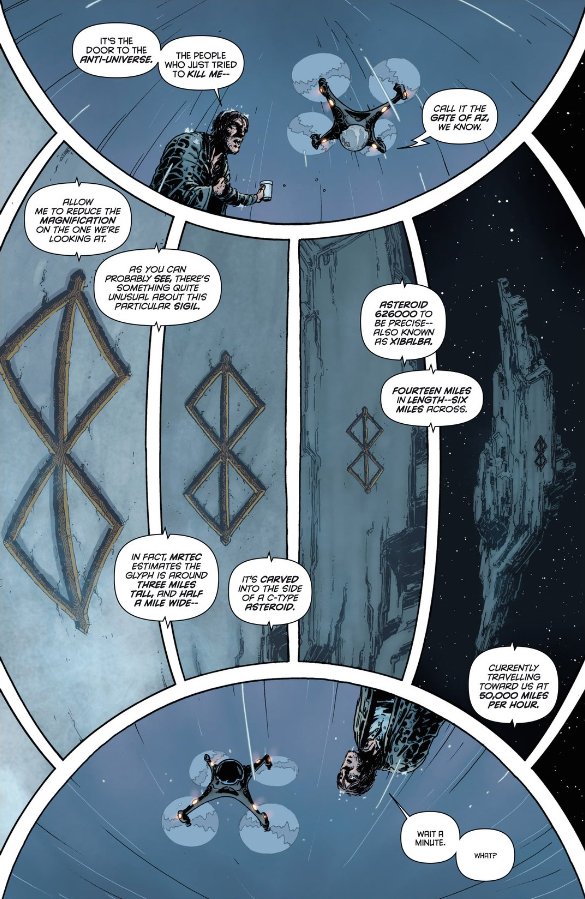 That’s a clever visual shorthand for confusion, but it also emphasizes that Nameless isn’t in control here. The half-circles at the top and bottom of the page mirror the roundness of Darius’ quadcopter, both the spinning rotors, and the spherical screen he uses to display images of the asteroid. Indeed, from the moment Darius arrives, no page is without a few notable circular/spherical objects, from the quadcopter itself to Nameless’s “Space Helmet” to the Earth and the Moon.

You’re not wrong to suggest that the characterization of Nameless is limited here, but Burnham goes a great way towards mitigating that lack by putting us inside his head so often. Indeed, Burnham’s storytelling sensibilities cut through all of the mythological exposition, making every step of the story clear, in spite of relatively few concrete cues from the text. This is an assured debut from a creative team that’s totally in sync, and I look forward to discovering exactly what it is that Nameless has signed up for.