Patrick: Were any of you paying attention to Twitter when they announced that Spider-Man would be appearing in the Disney Marvel movies? It was surreal: like a piece of super-fan-fantasy mutated into a news item and enthusiastically expressed itself in the middle of the night. On my feed, no one more more elated by this news than Amazing Spider-Man writer Dan Slott. He filled twitter with all-caps celebrations — not because he had anything to do with negotiating this deal (nor will he have any role in developing Peter Parker’s role in the MCU), but because he’s a goddamn super-fan. As the impresario and master weaver of Spider-Verse, Slott has had the opportunity to shout his love for all the Spiders from the heavens, and in issue 14, he goes out swinging, symbolically ceding his own control over the Spiders back to the characters themselves.

Okay, no more screwing around. It’s time to put all the Spiders and all the Inheritors in one amorphously large room and have them duke it out to the tune of that spooky prophecy. At first, there’s not a lot of room for ambitious storytelling — Guiseppe Camuncoli and Oliver Copiel, who are both credited as pencilers for this issue — have their work cut out for them simply introducing the cast. Appropriately, everyone is here. Pages featuring piles and piles of Spiders have become a staple of this story, and it’s still a fresh thrill to see these characters fighting side-by-side. In fact, I find that I’m even more affected by the sight now, having gotten some crash-course context for these characters over the last dozen or so issues. Hell, I’m even stoked to see Karn join the fight. 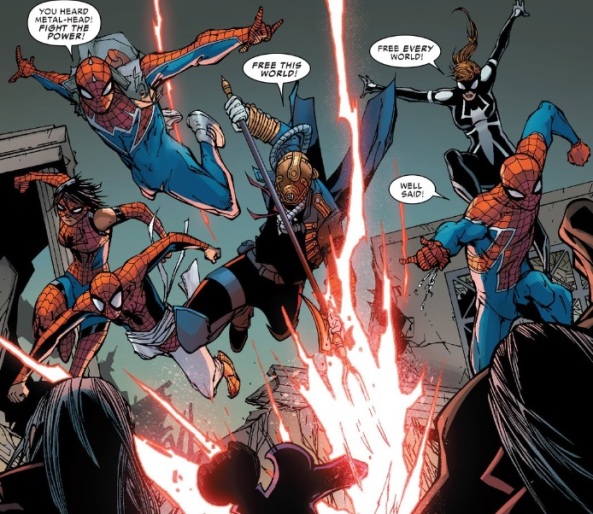 That leaping-through-the-air pose is the order of the day here, and it’s admirable how many of the characters are reverently featured on flashy action pages. It’s a vote of confidence in even the bit players in this drama as the creative team prepares to hand the characters’ destiny back to themselves.

I’m starting to get abstract, so let’s back-pedal a second. By my count, there are three big “writer driven” tricks at play in this issue: the Other-Scion-Bride Prophecy, Karn’s redemption, and Spider-Ham’s ruse. All of these beats are clever, or carefully orchestrated or somehow only possible because there’s an all-power narrative force driving the action. I won’t go so far as to claim that they’re somehow more artificial than the rest of the story (it is, obviously, all artificial), but these three ideas force us to come face to face with the writer of the story rather than the characters within it. The prophecy is probably the clearest example of this — there’s no such thing as a prophecy in real life because the concept doesn’t make sense. It takes a storyteller’s authority to lend any credence to a prophecy and Slott has been wielding that authority for several issues now, using it to dictate both the actions of the Inheritors and the actions of the Spiders.

Leave it to Otto to override this authority. 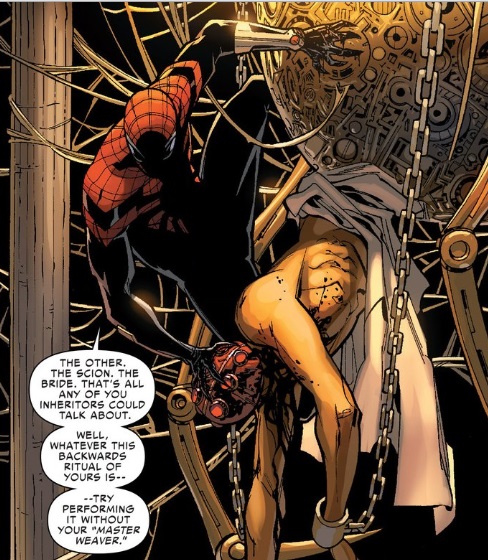 I love this: Otto, the one Spider who’s partially defined by his ability to kill, murders Slott’s avatar within this series, asserting that he’s releasing them all from the author’s machinations. All of those other clever little story turns happen before this moment, and afterwards, the characters are basically on autopilot. No masterful plans are enacted, and no real moral choices are made. Instead the characters act as we expect them to: Mayday exiles Solus’ consciousness rather than destroying it, Peter does the same with Daemos, Silk rescues Peter (and then they snuggle). While everything leading up to Weaver’s murder is marked by carefully measured plotting, the conclusion plays out naturally, even easily.

I’m not suggesting that Slott will release his hold on Spider-Man any time soon. What is clear is that we’re closing the book on Spider-Verse itself, and while it’s (largely) been a blast, this story was never naturally suited for the character. If there’s one statement this event has been making over and over again, it’s “look how awesome Spider-Man is” and that is such an un-Peter Parker statement to make. But it’s clearly a very Dan-Slott statement.

Drew, I know you’d be struggling with Spider-Verse in the last few issues, mostly due to the main series insistence on selling us the tie-ins. Were you relieved to see not a single editor’s note in this issue? Were you satisfied by the ending? How the hell does Ben fit into Spider-Ham’s suit? Oh, and on that note: naked Spider-Ham — that’s just Slott trolling us all, right?

Drew: I mean, we had to see what that dude looked like out of the costume at some point, right? He clearly has the most unusual anatomy of any of our heroes, though I’m disappointed that he doesn’t look more like Porky Pig under that costume. Speaking of that costume, I don’t think there’s any indication that Ben ever wears that suit; between Spider-Ham’s arrival in Loomworld and the reveal of the ruse, we see neither Peter Porker nor Ben (nor, for that matter, the Spider-Ham costume). I think Porker’s nudity was more to make him look like a baby, and less to give up the costume to make the baby look like a cartoon pig in a Spider-Man outfit.

As for the ending, I was also struck by the “look at how awesome Spider-Man is” thesis of this event, and I struggled to find any real statement about the character. Ultimately, a massive team-up against a massive threat doesn’t feel particularly Spider-Man-y. As much as we may associate Spider-Man with superhero team-ups, we also associate him with street-level threats and a rich (if sometimes frustrating) life outside of the costume. I found this issue, and ultimately this event, coming up short on any grand statements about Spider-Man besides his awesomeness.

That is, until Otto kills the Weaver. That is quickly followed by Mayday’s decision NOT to destroy Solus’s soul crystal, and a brief discussion between the other spiders about showing their opponents mercy. An assertion that heroes don’t kill goes without saying in a Peter Parker-led book, which makes sense, given that this event was originally planned to take place during Superior Spider-Man. Peters Parker and Porker, Gwen Stacey, Mayday and Ben Parker — none of these characters need a reminder that Spider-Man doesn’t kill, but Otto sure as heck does. His nuclear option certainly works, but what are the long-term effects? More importantly, what are the moral implications? Unfortunately, it’s not clear how much time we’ll get to hang with Otto to see the fallout — we’re promised an epilogue, but with so many spiders to say goodbye to, there’s no guarantee any one of them will get a ton of screen time.

Actually, that there’s too many spiders to fit into one issue is a bit of a problem here, too. I mentioned Mayday’s decision not to kill Daemos (the Inheritor that killed her parents), but between all of the murders we saw the Inheritors commit leading up to (and through) this event, I had kind of forgotten why she would want to. At the very least, I had forgotten that she would have a vendetta against this Inheritor in particular. Slott makes a point of reminding us of her history, but that reminder only highlights how insignificant Mayday’s arc actually is to the larger narrative.

I have similar reservations about Spider-Gwen’s autonomy. The conflict over it is over within a page, and I kind of resent the implication that this is somehow important to Gwen. I mean, I get that she’s no damsel in distress, and is fully capable of handling herself, but refusing help feels totally egotistical — these are all superheroes, and they’re all here to help each other. I appreciate that this is a largely symbolic gesture, but I question the importance of that gesture to Gwen. In her world, she’s the superhero; the condescending protection Peter has heretofore insisted on is in no way a significant part of her life, and the catharsis comes from changing the mind of a character she will in all likelihood never see again. Unlike Mayday’s arc, I doubt this particular beat would have benefitted from more time, so maybe Gwen’s page would have been better spent fleshing out some of the other characters’ arcs.

Because there are a ton of little arcs here. But again, there are so many spiders here, contributing to such a massive narrative, that none of their individual stories feel in any way significant. Ben Parker of Earth 3145 gets a win here, paying off his reluctant decision to join the fight, but there’s only time to celebrate that as a tactical victory, emotions be damned. Heck, even Peter’s near-sacrifice is too rushed to really have any emotional impact. Is he sacrificing himself? No! He was just bringing Morlun close to teleport him to Earth 3145! Wait. Maybe he’s still sacrificing himself? No! Silk was able to find him because of their connection (and maybe because this would be the obvious place to take an Inheritor)!

Actually, those two threads do make me wonder exactly where Uncle Ben will go now. Living a solitary life on Earth 3145 seems too depressing, plus, his bomb shelter is now filled with exiled Inheritors. Will he go to another Earth? 982 (Mayday’s)? 65 (Gwen’s)? Perhaps trusty old 616? It’s a weird prospect that I’m afraid this event hasn’t properly prepared us for.

Ultimately, these are complaints that I would have at the conclusion of any big crossover event like this, so while the emotional beats (or lack thereof) left me cold, I’m inclined to say this issue was a success. We checked in with a ton of characters, gave many of them character-driven motivations, and tied up basically all of the loose ends. Its a perfectly competent manifestation of my feelings on this event as a whole — its a fun celebration of the character, even if it doesn’t really say anything about him. Oh, and a naked cartoon pig.

4 comments on “The Amazing Spider-Man 14”