Drew: At what point is it fair to form an opinion about a work of art? The conventional wisdom warns us not to judge a book by its cover, but at what point is it fair to judge? I’ve been told that the first chapter is enough, but I’ve seen others advocate for just the first page. I tend to be a bit more charitable than most — I’ve never walked out of a movie, but then again, I would probably not see a sequel of a movie I didn’t like. So, how do comics fit in to that? Is the first issue the first page of a story? The first chapter? The first movie? Single issues rarely give a complete story (at least nowadays), but also offer a convenient point to stop and reflect. After two issues, we may not have a great idea of what Secret Six will actually be like, but maybe we have enough to form an opinion about it.

Which is to say, I pretty much feel the same way about issue 2 that Spencer and Suzanne did about issue 1; there are some fun moments here, but unclear art severely handicaps the narrative. Indeed, my sentiments are so effectively articulated in that first writeup, I’m just going to jump in to examples here.

For me, the first (and perhaps most important) plot point that is totally botched by the art is the identity of Catman’s former captor. 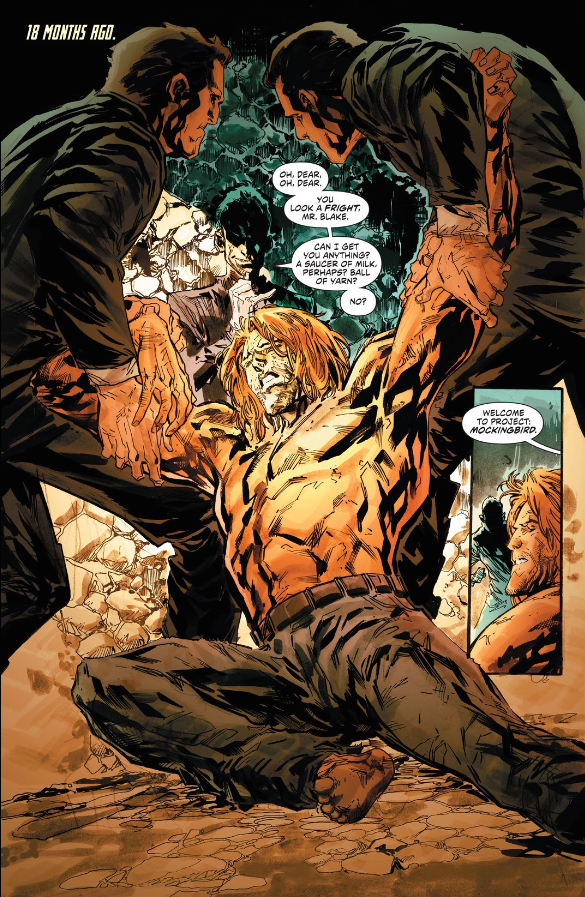 I’m pretty sure it’s supposed to be the Joker, but that theory isn’t based on his appearance here. Nor the next page. Nor the next one. It’s not until the fourth page of these characters interacting that we see the signature toothy grin that made me even suspect we’re dealing with the Joker. The fact that I’m still not sure is a testament to how unclear the whole sequence is.

It’s easy to blame Ken Lashley’s pencils for failing to distinguish one of comicdom’s most iconic characters, but I’m equally confused by Jason Wright’s washed-out colors, which never clearly establish Joker’s distinctive purple suit or green hair. Heck, even a different font choice from letterer Carlos M. Mangual — like those used by the various letterers on Batman — could have made the Joker’s identity more clear. Ultimately, I think the blame might fall on writer Gail Simone, who fails to establish the Joker’s voice. Indeed, aside from the half-hearted cat jokes in the panel above (which to me read more like a non-costumed villain mocking the idea of being a cat man), the closest we ever get to a joke is  a few cute nicknames — nothing that screams “Joker”. But again, maybe it isn’t the Joker? Or maybe it’s for some reason important that we not figure out his identity until several pages in?

I might be more certain on the Joker question if I had a better understanding of the purpose of this flashback. It seems like it’s included to explain Blake’s aversion to drowning in a box, but like, duh. Blake is ultimately able to convince Shauna Belzer (the Ventriloquist) to use her telekinetic powers to save them, but self-preservation is hardly a motive that needs a backstory. It seems likely that the Joker is somehow related to whoever is now holding the Secret Six captive, but maybe not? Or maybe that’s not the Joker (but we’re supposed to think it is)?

I suppose this is all circling around the integrity of the central mystery of this series — “what is the secret?” — but since we have no hints as to what that question is even remotely related to, it’s hard to latch on to. Presumably its some kind of big secret? But it somehow involves six characters I’ve never encountered before, so literally everything about them is a secret to me. Without a hint of what the secret might even be about, the mystery runs on just curiosity — no intriguing hints, no fan theories — which may be even less than the critical mass it generally takes for me to pick up an issue in the first place.

Spencer, I really didn’t enjoy this issue. There were definitely a few good moments, but certainly not enough to get me invested in the mystery. I know it sounds harsh, but all of these characters could be killed by whoever is pulling the strings here, and I would happily never know what the secret is. Are you finding any more to like about this issue, or are you as turned off as I am? Also, am I just being dense about the Joker thing?

Spencer: Honestly Drew, it never even occurred to me that Catman’s jailor could be the Joker until you brought it up. I think you make a strong argument for why it could be him, but I don’t really back the theory myself; Lashley and Wright’s art can be awfully unclear, but I don’t think even they could obscure a character as significant as the Joker.

Either way, Catman’s jailor refers to the whole ordeal as “Operation: Mockingbird.” That should sound familiar to long-time Secret Six fans, as Mockingbird was the alias used by many of the team’s various leaders/financiers/backers/masters. This leads me to think that whoever is behind Blake’s captivity likely has ties to the experiment the Six currently find themselves in, although who he is and most of the reasons why this is happening at all still remain a mystery.

So I can see the dual purposes of the flashback — to establish Blake’s fear of captivity and likely reveal more layers to the conspiracy — but, unfortunately, the scene is poorly timed. First of all, it feels too early to be focusing so closely on one character; much of the cast is still new, and the focus on Catman (and to a lesser extent Ventriloquist) leaves little room for Big Shot or Porcelain especially to do much of anything.

Moreover, introducing another mystery without resolving the first muddies the entire issue. I went into this issue expecting to learn more about the masterminds behind the Six’s sick survival game, but all of a sudden found myself also thrown into the mystery surrounding Blake’s abduction, which was jarring to say the least. The flashback is divorced from all context; we barely know who Catman is, much less who his captor is, why he wants Blake, how he captured him, or what he gets out of being so sadistic. I really can’t tell what mysteries are supposed to be mysteries and what mysteries are just plot points I’m not fully grasping, and without that information these scenes just read closer to sadistic torture-porn than anything truly significant that I can sink my teeth into. Perhaps it was Simone’s intention to keep readers off-kilter, and if so she succeeded, but I just don’t think that was the best approach to take.

Of course, I could easily overlook most of my issues with the plot if Secret Six was fun to look at, but unfortunately, that’s not the case; the unclear art doesn’t help Simone’s story one bit. Between Drew’s lead and my complaints in last issue’s review we’ve probably already covered this quite thoroughly, but I still want to touch on the art for a few moments, if only because I can’t believe I’m still seeing work so rough and inconsistent in a comic book published by one of the Big Two. I mean, it’s not all bad; I like some of the staging, and the first two-thirds of the issue, where Lashley inks his own work, is full of energy (and one very cute kitten!), but even much of this segment ends up being needlessly confusing.

If not for the characters eventually calling out “Black Alice!” I may have never known who was being electrocuted, especially considering Lashley’s perplexing choice to obscure Alice’s head in the first panel. Even the poses and coloring of the background characters doesn’t help, as it could easily appear like they’re being electrocuted as well. Simone’s essentially forced to use dialogue to explain what’s happening in the scene because the art just isn’t clear enough, and as far as I’m concerned, that breaks one of the cardinal rules of pencilling.

Things get worse when Drew Geraci takes over on inks near the end of the issue. Lashley’s inking style is very sketchy and full of lines that, for all its issues, at least gives the art some energy and personality, but Geraci favors using lots of shadow instead, and it leaves the characters looking sparse and oddly misshapen.

Wow, I don’t know if I’ve ever seen a worse case of an image not matching the power of its words. This should be a triumphant, bad-ass scene, but the art doesn’t convey that at all. Half the team are barely visible, and the ones we can see well just look lumpy and uncomfortable.

I hate to say it, but the art on Secret Six is a total wash, and the plot could use some tweaking too — it almost feels like it’s moving too slow yet too fast at the same time, rushing through plot even as it fails to provide enough context to fully understand these developments. Fortunately, I feel like this book still has enough potential to keep it on my radar for the time being: first of all, current cover artist (and Secret Six co-creator) Dale Eaglesham appears to be taking over on art after Convergence ends, and while I have my reservations about Eaglesham (he’s a bit too slow for a monthly), his work is a huge step up from what we’ve gotten so far.

Second, despite any other problems I may have with this title, I like the cast. They’ve all got unique personalities that are already starting to bounce off each other in fun ways (Catman and Ventriloquist have an amusing dynamic, especially since Shauna seems to want to marry him now), and despite the brief time they’ve had together, they’re already starting to develop some close bonds that look to be worth exploring.

Moreover, Simone continues to write some of the most distinctive dialogue in the business. Simone’s never content with a bland line of dialogue, and while her attempts to spice things up don’t always completely work — Big Shot’s “Poor, damaged man” made me cringe a bit — when it does it pays off with huge dividends.

Ferdie’s crude, but he’s always good for a laugh, and I can’t think of another character in comics with a voice quite like his. Simone fills the rest of the cast with similar levels of unique personality, providing substance in a title that otherwise doesn’t feel like it has much to offer quite yet. These first two issues have been a flawed, frustrating debut, but there’s the makings of a good comic buried deep within Secret Six — or, in Eaglesham’s case, looming close in its future — and I only hope the creative team can tap into that potential before it’s too late to turn things around.