Illusion, Michael. A trick is something a whore does for money…or candy!

Drew: While I understand the distinction magicians make between “trick” and “illusion” — the former is about the techniques a magician uses, the latter is about the effect those collected techniques have on the audience — I think we’re perfectly justified in calling them “tricks.” The “illusion” — that a rabbit appears out of thin air, that a lady survives being sawed in half, that a card jumps to the top of the deck — dares us to believe that “magic is real,” but the actual techniques used to pull it off tend to be much more clever, if simpler, explanations. For me, an understanding of those tricks leaves me much more impressed about the illusion — knowing just how subtly they palmed the coin, or how convincing their false shuffle allows me to appreciate the actual craft that goes into what they’re doing. Indeed, any “magic” in the illusion lies in the skills of the magician, making knowing the trick more magical for me. Which I suppose is my way of asking forgiveness in focusing on the “tricks” of Daredevil 13, which pulls off an illusion so compelling, it’s hard to deny its magic.

The issue follows in the wake of Matt’s declaration of love to Kirsten, showing us their apparent bliss, but also letting us in on Matt’s fear of what might happen to Kirsten now that he’s let her in so close. This fear manifests itself silently as the Owl observes their lives through the cameras on their phones and computers.

It’s a foreboding image, and artist Chris Samnee is careful to keep that dread in the back of our minds, sneaking some camera-ed device into every scene. It feels somewhat inevitable, then, when the actual attack comes, as Kirsten is made a target for her connection to Daredevil…

…only she isn’t. She’s attacked for sure, but by one of her own enemies: a serial killer she helped put away in her years in the district attorney’s office. We don’t get that detail until Matt has already arrived to rescue her, and Matt doesn’t quite grasp that point until well after the attacker has been subdued (with an assist from the Shroud), making the issue feel very much like a lesson about Matt not assuming everything is about him. We’re sucked into his paranoia because we know all too well what happens to Daredevil’s girlfriends, but more importantly, because Samnee sears the image of the Owl into our mind. And I do mean sears — after lulling us into that darkness (lit only by the glow of screens, rendered beautifully by colorist Matthew Wilson), he hits us with this:

That much white space would be shocking enough, but Wilson sells the holy living snot out of the glow effects, making it somehow seem whiter than white. I’m honestly not sure I’ve ever seen a colorist use white for color holds, but he almost converts the entire outline here to white. It’s a bold choice, and makes for a memorable image.

That memorability is what makes it so easy for the Owl to hang over the rest of the issue. Samnee opens the next scene with a shot of a camera, but otherwise, the Owl completely disappears (except for the last image, which I’ll get to in a moment), even if we can’t stop thinking of him. Our mind immediately jumps to the conclusion that the Owl is behind Kirsten’s attack. Learning that he wasn’t feels like a big enough twist to put our guards down — the Owl must not rear his head until next time — but that’s exactly when writer Mark Waid yanks the rug out from under us again, revealing that the Shroud is working for the Owl.

It’s a hell of an ending that we don’t see coming thanks to one hell of a double-feint. Waid has such a knack for this kind of classic twist ending, I’ve almost started to take it for granted, but cramming two into one issue reminds me of just how cunning he can be at sculpting a surprising plot. Not that this issue was particularly plotty — we mostly get vignettes about Kirsten and Matt, and then a few patronizing conversations about fearing for Kirsten’s safety. Fortunately, Kirsten is plenty strong enough to stand up to those sentiments, as a kind of fridging antidote.

Patrick, I’m afraid I haven’t given myself enough time to dig into Kirsten’s strength as a character, or the overt parallels between the Owl’s surveillance and the general loss of privacy (from the NSA or otherwise) associated with the digital age. Do you have any thoughts on either of those, or would you rather focus on the tricks, too?

Patrick: It’s weird that the camera-tapping isn’t a more prevalent theme for the issue, considering how much of it we get so early on. One thing that makes it especially alien for this series is that video is a largely visual medium — and in the case of a lot of those cell phone and computer cameras, exclusively visual. Daredevil obviously has to engage in visuals (it’s a comic book, after all) but there’s usually an emphasis on translating other stimulus into visuals, sort of approximating Matt’s perspective for the reader. The cold open for this issue subverts that entirely, giving us a nearly wordless sampling from a night out with Matt and Kirsten. There’s no radar sense, no voice-over describing the telltale smells or sounds, so we’re left experiencing the action as a voyeur, not all all the way our hero is experiencing it.

Check out that very first image, it has two different reflections of our characters, neither of which Matt is capable of seeing — even with radar sense. Those first two panels really play to this idea that the cameras are tucked away in strange places, giving us angles that are either very low or very wide. It gets a little more abstract on the beach (where are those cameras, I’d like to know!), but that voyeuristic sensation intensifies when Matt and Kirsten start to become… more intimate. Not to be a prude, or anything, but man, does that do a good job of making the reader feel like they’re trespassing on the characters’ experience, rather than participating in it.

Which sorta ends up being how Matt feels later on, when he realizes that he’s trespassing on Kirsten’s own vendetta-crazed killer. Drew, you prompted me to talk about how bad ass McDuffie is as a character, and I certainly can’t argue with that assessment. Not only does she have her own nemeses to battle, she even does some of the battling herself. I understand that that can be sort of a trope — superhero’s girlfriend becomes a superhero in her own right — but I don’t think there’s any danger of that happening here. Kirsten isn’t self-possessed in the same way Matt is, but she is self-possessed nonetheless. She almost has her own Daredevil-y moment, using her senses (primarily vision) to assess the threat and identify her attacker. This spread is amazing, by the way. 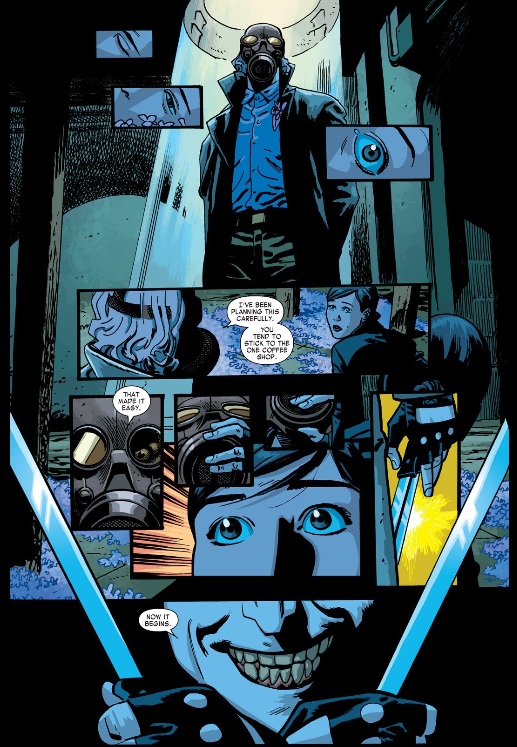 Again, notice how intently Samnee settles on her eyes. That makes all the opposite panels images and information that she’s taking in. Pair of knives? Check. Gas mask? Check. Lilacs on the ground? Check-check. When Matt comes up against this guy, he starts taking in all this extra information. Hey: Daredevil, those knives ain’t made from a special metal: they’re just plain, old knives.

Also, I want to start this conversation: do we think the Shroud is working for the Owl? Or the other way round? That last -page reveal puts Max on a throne, but that’s a reversal of the characterization we’ve seen for… well, for both of these guys, really. It’s a subtle distinction to be sure, but I’m sorta hoping that Shroud is the one in control here, as sort of the season-long Big Bad of this volume of Daredevil. His perception-blocking powers make him such a natural nemesis for Daredevil, it’s only natural Waid and Samnee would explore this further.