Patrick: Why do you take a chance on buying a brand new issue of a brand new comic book series the day it comes out? When you think about it, you’re taking a pretty big risk regarding the quality of the thing you’re about to read. I suppose the worst thing that can happen is that you’re out four bucks and about eighteen minutes. But there are so many damn comics, and I know I’m always looking for place to cut my pull. Number ones, though? I roll the dice on those several times a week. But for every number one I do read, there are like 80 I don’t. So what’s the alchemy that made me pick up Howard the Duck 1 over, I don’t know, Spawn Resurrection 1? The character? The publisher? The artist? The writer? That’s a question the issue itself poses: how did you come to Howard the Duck?

We meet Howard in a cell: he’s being held overnight for causing some kind of unspecified disturbance. It’s not important why he was arrested, but it is important that we see that he was arrested because that tells the story of Howard, the hardboiled detective. That’s part of the character’s appeal, so you better believe that we’re going to lean into it (did you see the suit he’s wearing on the cover?). There’s a little bit of a problem there: while modern audiences may still be into noir-ish detective fiction, their protagonists are a little dated. Suits, we can get behind; a night in the slammer, that’s still charming; referring to women as “doll,” that ain’t gonna fly. Twice in this issue, Howard is corrected — once by She-Hulk Jennifer Walters, and again by tattoo enthusiast and part-time-bad-person-puncher Tara Tam.

Howard meets Tara in jail, and they form a fast bond over their shared outsider status. They’re both being hassled by the cops because neither of them has very much in the way of past records. Howard is quick to snap back:

Already in the first three pages, writer Chip Zdarsky is trying out the two qualities that he thinks may have made us pick up this book in the first place. The first was Howard’s hard-as-nails PI persona, the second is just sheer weirdness. I’ll confess that part of the reason I picked up this issue was because — the fuck? In a universe dictated by silly ideas, this is one damn silly idea.

Shockingly efficiently, Zdarsky moves on to the next reason I’d pick up this book: it’s being published by Marvel, a brand I know and trust. Howard walks back to the building he rents an office in and it just so happens to be the building that Jenn Walters works out of. This story will go on to cross paths with more prominent characters in the Marvel Universe (arguably, the most prominent), but this particular detail recalls Charles Soule and Javier Pulido’s She-Hulk series. Then it totally makes sense that I’d pick up this issue, right? I already love something of which this character is a part.

Of course, there are some elephants in the room I have yet to address. I’m talking about The Big Reasons someone would buy this book: 1) George Lucas’ perplexing 1986 train wreck Howard the Duck and 2) Howard’s own post-credit cameo in Guardians of the Galaxy this summer. If I had to guess, that’s probably the primary reason this series even exists, let alone why most readers bought it. Coincidentally, “because I saw him at the movies” also happens to be the reason Howard’s next client comes in to see him.

Then I suppose, there’s one final reason someone would pick up this series — the creative team. I’ve loved Chip Zdarsky’s work as the artist on Sex Criminals, a series which is almost pathologically packed with visual jokes, and it’s awesome to see his penchant for puns, pop culture references and just straight-up nonsense applied here. Zdarsky goes nuts with it, going so far as to have Howard acknowledge that he was the subject of that George Lucas movie. Which: what? I know Marvel Comics exist in the Marvel Universe, but I guess it hadn’t occurred to me that weirdly licensed movies from thirty years ago would also exist. Ultimately, it’s too big and too weird of a thing not to address in the issue, and the tone of the piece is all the brighter for it. Howard can correct his client when he accidentally calls Black Cat “Cat-Woman” (a common mistake, I’m sure). Or an editor’s note can chime in to explain that there’s nothing particularly satanic about Hellcat. Or we can get a whole training montage set to the fictional song “Training Montage” by the MotiVaders. It’s pure silliness, and that’s exactly what I expect from the guy that has an active facebook relationship with Applebees.

My reason for picking up the book was Zdarsky, but that’s the one quality Zdarsky doesn’t seem to address directly. But it’s not like he has to — the dude’s personality joyously bursts off every page. What about you, Ryan? What made you pick up this issue? Was it the Guardians cameo? This issue’s own final-page cameo really hammers home the connection between Howard and the Guardians, so I’d bet that’s what the creators are banking on. Maybe you’re a fan of Joe Quinones, who knows how to draw a duck in a three-piece suit better than anyone else I’m reading (though I’d love to see Jamie McKelvie or Mikel Janín give it a try).

Look at his tail!

Ryan: I confess to being in the same boat as you, Patrick: the Zdarsky force is strong. After reading Sex Criminals and seeing the relationship which he inculcates with his favorite chain restaurants and with fans in the letter column, reading his new title felt like supporting someone I know. But does the cringe-worthy titular character make this experience more like the obligatory trip to the bar on a work night to see your friend play in a terrible band?

Patrick asks why we put this title in our hot little hands, but I would like to ask the following: Why Howard the Duck?? Yes, he had his small sight-gag of a cameo in Guardians as a weird in-joke, ha ha, but why bother? Every previous time I have heard this character mentioned, it was always as a punch-line. While the film does enjoy the honor of being the first Marvel comic to ever be made into a film, the rest of its accolades are dubious at best, as it earned four Razzies that year, nearly bankrupted George Lucas, and is a frequent member of “50 Worst Movies Ever Made” lists. In it, Howard himself seldom strayed from terrible duck-centric puns, which resonate about as well as a quack in a cave (by the way, that myth was busted), and failed to attain the “huge cult following” which the film’s DVD sleeve advertises. So why bring him back at all?

Of this, I am unsure, but I do know what works and doesn’t in this comic. Howard the Duck has no super powers, but as the recap page insists, he “displays a remarkable amount of COMMON SENSE in a WORLD GONE MAD.” Having recently played the “What Useless Super Power Would You Have?” game with my class of 10th graders, I can truly appreciate shrewd perspicacity as a power of sorts. However, Howard blunders through most of his problems, relying on sheer luck and celebrity run-ins to save his tail feathers more often than not. I can appreciate the tenuous place of the non-powered in a universe such as Marvel’s, but if we are building a character around his ability to savvy his way out of situations, then let’s see it more than once in an issue! Hopefully, Howard’s imminent pairing with the wry Rocket the Raccoon will bring out the duck’s signature talent.

Other than that complaint, Howard the Duck 1 accomplishes what it sets out to do: re-establish a character, define how he fits into the universe as whole, set the audience up for the next big happenings, and set the tone for the rest of the series. The tone is where this comic shines, which should come to no surprise for those who follow SexCrims. Zdarsky’s sense of humor is stupendous and, as Patrick mentioned, unrelenting, as seen in his odd-ball characterization of Spider-Man. 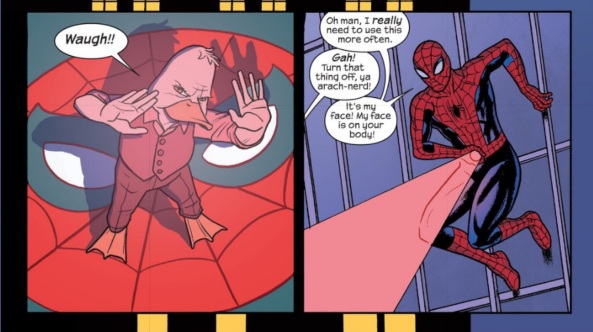 However, the key component — the Zdarsky sauce (TM), if you will — makes the reader feel like they are always in on the joke, making the humor insistently endearing, no matter how eye-rollingly lame it may be. For example:

This is my favorite panel of the issue (She-Hulk on click-bait!), and illustrates the potential for this title as the creative team give us an almost Stoppardian look at some of our favorite heroes between scenes and at the edge of the curtains. I hope we get to see more of these small slices of banality, these moments between the moments which are usually presented to us, as the title continues.

Zdarsky and Quinones have an uphill battle ahead of them as they try to instill a future onto a character who couldn’t even attain the nostalgia factor from its past. It is likely that I will pick up #2, because I believe that between the two talented creators and all of the fan-pleasing cameos in the Marvel U, there is the potential to turn yesterday’s mall food court Peking left-overs into foie gras.