Patrick: Himato Yoshi and his four sons were murdered by Oroku Saki and the Foot Clan. Hundreds of years later, and on the other side of the world, they are given a second chance to be a family as a quartet of anthropomorphic turtles and a wizened man-rat. Mutation is the ultimate blessing: it literally allows the Himato family to beat death and live together indefinitely. But they had the fortune to be among the only accidental mutants in the world of TMNT, and are therefore beholden to no agenda, no cause but their own. Under the leadership of Old Hob, the Mutanimals have taken on the identity of avenging victims, and writer Paul Allor explorers how their weaknesses make them strong (and, maybe the other way ’round too).

The issue starts with the clearest analog for a soldier suffering from PTSD: Herman the perpetually militarized Hermit Crab admits to not knowing what to do with himself when he’s not in battle. He’s up in the middle of the night (3:05 if the clock on the wall is to be believed) and struggling to live a normal life. Artist Andy Kuhn makes the most of Herman’s appearance and smartly dresses him in normal human pajamas — which are adorable — and has him drinking a glass of milk. It’s a clever juxtaposition of beastliness and cuteness, and even without copy the page shows Herman’s inability to fit in. At first blush, it’d seem like Mondo Gecko has figured out how to be a totally chill, normal dude, but he’s actually just become really good at compartmentalizing. Mondo even sorta blows off the cause he’s fighting for, off-handedly referring to it as “all that righteous noise.” Right from the jump, we can tell that these characters are broken.

But, broken or not, the Mutanimals have a job to do. After having rescued the horribly disfigured Mutagen Man, Hob hatches a plan to rescue the remaining mutants in the possession of the Null Corporation. Hob and Slash capture and interrogate one of the Null scientists, who eventually gives up the location where they’re keeping their only two surviving mutant experiments. But we’ve already got a problem with the group’s leadership: Hob and Slash can’t quite seem to agree on how much violence for their cause is acceptable. Interestingly, both cite their experience being tortured and experimented on as reasons either for or against killing the folks that work for Null. Again, this is an expression of victimhood.

All of this thematically solid material is really just setting up one of the more ambitious re-inventions of the series: Mutagen Man. The character was originally, un-ironically named Seymour Gutz, and while his mutation did cause him to look like a monster, he was also able to shape-shift, and eventually wound up back in normal human form. Like so many of the Ninja Turtle cast, he was a joke, a fanciful doodle on the page, another toy to sell. But Allor pitches him here as an individual as psychologically damaged as he is physically. If that sounds like impossibly dark material to you, you might be right. Even with the rest of the characters motivated by their own suffering, Mutagen Man sticks out like a sore thumb. He cowers on the ground and wails at the first sign of danger, ready to acquiesce immediately when threatened.

That’s a compelling character portrait, but I can’t help but feel that it’s undermined some by the scene that Mutagen Man and Mondo Gecko share. Mondo’s a chill-ass dude, so he’s all about being a supportive bro and offering to play video games with his traumatized buddy. The gesture is clumsy, and Mutagen Man’s inability to even comprehend what fun is ends up reading like an uncomfortable cross between silly and devastating. So I can’t quite tell whether Mondo is continuing to be a silly bro when he makes his “Seymour Gutz” joke or if he’s course correcting. But the joke’s a big hit and Mutagen Man is moved to tears by his own laughter, not in a I’m-laughing-hard-I’m-crying kind of way, but in that he’s overwhelmed by the fact that he’s happy. 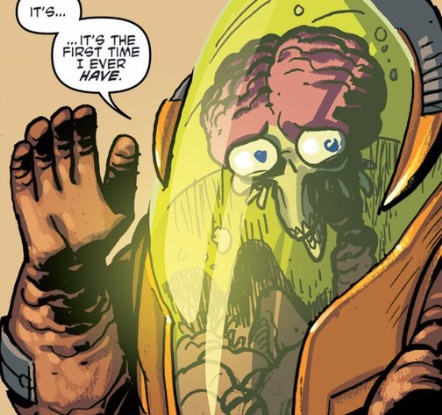 That expression goes right for emotional transparency, when I think subtlety might have fared better. Elsewhere in the issue, the interpersonal relationships between the team members are allowed to play out in much more subtle ways, and as a result, I’m much more invested in, say, the dynamic between Hob and Slash.

That’s a relatively minor complaint. I think Mutagen Man’s characterization is actually quite courageous, and I look forward to seeing him struggle with his own courage in future issues. Plus, I’m a sucker for new mutants, so that teaser at the end of the issue hooked me like a fish. Drew, how do you like the new Mutagen Man? Is he too much victim for you? And what’s up with Lady Null? She’s like… a demon or something?Whatever she is, she makes such trite statements as “if you control the world’s economy… you control the world.” Hey, Lady Null — duh.

Drew: Actually, I wasn’t particularly bothered by Seymour’s victimhood. Allor definitely broadcasts it as clearly as he can, but as a character who has only ever known captivity, his complete lack of will makes sense to me. He’s pitiful, absolutely, but he’s also a logical conclusion of Null’s totally evil practices. I think it’s worth pausing here to talk about the Null Group, because I actually think the way Allor handles that speaks to why I’m comfortable with Seymour’s characterization.

I’ll admit that I’m not 100% sold on the over-the-top evilness of the Null Group. I mean, I get that they’re led by someone who looks very much like the devil (and back in the Archie Comics run, grew to look more devilish with each evil deed), but their entire plan hinges on the willingness of the world to accept slave labor — slaves that would still need food and shelter, and whose production has some kind of insane failure rate built into the cost. It’s a stupid, stupid plan, but Allor manages to rescue it with the perhaps more cynical observation that it’s being carried out by a bunch of wage-slaves. The goals of their corporation may be evil as hell, but hey, they’ve got bills to pay. Or, as the captured scientist puts it: 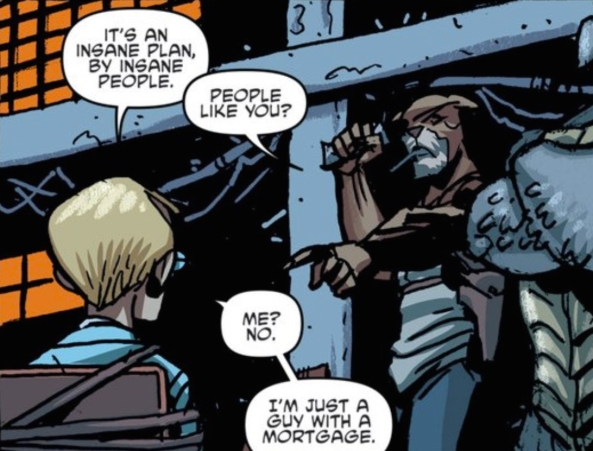 That’s actually a good deal darker than a cabal of scientists invested in the evil they’re carrying out. I think it also explains why Seymour has had such a joyless life (like, above and beyond being a captive science experiment): there are few more joyless places on earth than a workplace where everyone is just there for the paycheck. I’ve been lucky enough to work in places where people love what they do, which helps make even the boring parts of the job a little more fun, but I’ve also been unlucky enough to work in places where nobody loves what they do, which helps make even your lunchbreak a bland, emotionless dirge. Seymour’s life is that experience blown up to grotesque proportions, where there’s no humor, no fun, no semblance of free-will. I appreciate that reading his life as a metaphor for wage-slaves might be even more heavy-handed, but it worked for me like gangbusters.

I think another key piece of this issue’s success is its sense of humor — this is a surprisingly serious issue, so those moments of laughter really leaven the proceedings. There aren’t a ton of funny moments, but their infrequency actually makes them stand out more. Seymour triumphantly asserting his identity as a lame pun (and Old Hob’s confused reaction) is a great moment, but the absolute best of these come from Pigeon Pete.

As with the previous issue, basically everything Pete does here is hilarious, but I’m struck by how he’s basically pitched as the polar opposite of Seymour: carefree, innocent, and happy as a clam. The easiest way to contrast a character who doesn’t understand what “fun” is? Show another one blowing bubbles. Pete’s only line in this issue, ” or it could be fireworks,” uttered when the mutanimals are under fire, just drives his carefree innocence home. Of course they’re fireworks to Pete.

The end of the issue leaves only Slash and Mondo standing free, which will give Slash the opportunity to show his leadership skills, and maybe force Mondo to acknowledge the importance of this mission to him. Plus: Pete’s going to be annoying the heck out of everyone in that prison car. You can bet I’ll be back for that.