Drew: Means, motive, and opportunity. We’re familiar with how these play in a criminal case — a prosecutor must convince the jury of these three elements in order to convict — but I’d argue that they’re just as important in crafting a compelling superhero origin story. “Means” would be the superpowers (or lack thereof): the radioactive spider-bite, the alien DNA, the years of martial arts training; “motive” is their reason for fighting: the death of a loved one, the morals of a father-figure, some huanting mystery from their past; and “opportunity” is the wealth of villains: bankrobbers, intergalactic warlords, or even the corruption of their hometown. As with a criminal case, means and opportunity are pretty open-and-shut — the basic whos and whats of the story — but motive is much more subtle. An audience will dismiss a far-fetched or unbelievable motive just as quickly as a jury will. Of course, that also often makes motive the most elusive of these elements — a feature Duane Swierczynski and Michael Gaydos highlight in The Black Hood 2.

Hettinger manages to successfully thwart the mugging he so dramatically interrupted at the end of issue 1, a feat he largely attributes to his drugs. Of course, he’s running low on those drugs, so he hits the streets back in his other uniform, emptying the pockets of street dealers in hopes of getting his fix. This garners the attention of the boss of those dealers — a mysteriously unseen drug kingpin — who orchestrates a quick and dirty frame-job to catch Hettinger with the pills.

What’s remarkable to me about this burgeoning origin is how far away Hettinger is from anything heroic. Sure, he stops a mugging at the start of the issue, but he more or less stumbled into that one in an attempt to avoid his speech therapist.  Other than that short scene — where again, he gives up most of his agency to the drugs — the only real action he takes is shaking down a drug-dealer. Not exactly the most heroic. When he isn’t basically mugging people (effectively undermining whatever karma he earns at the start of the issue), he’s almost entirely passive. His addiction creeps further along as he samples heroin, and the machinations take up almost as much of the issue as he does. Nothing illustrates his passivity quite like seeing just how useless he is, even as his enemies are in his fucking house. 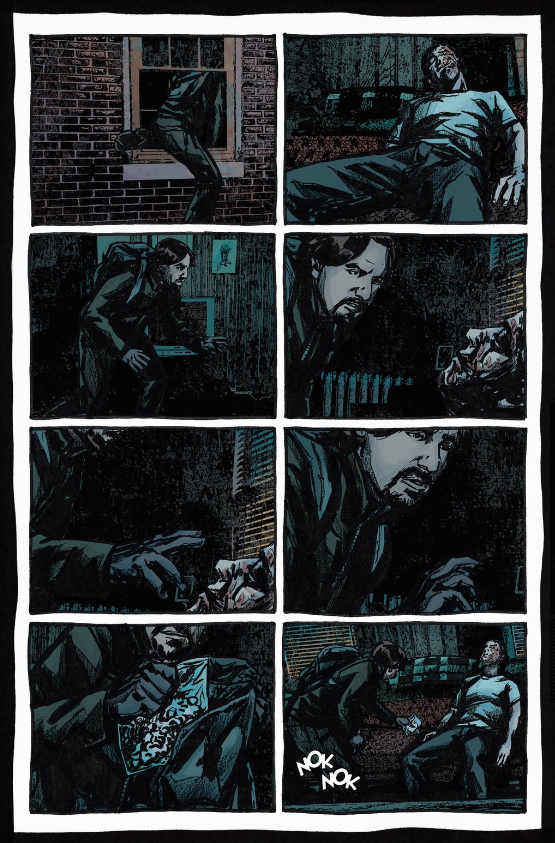 As if to goose the tension of Hettinger’s actions against our expectations of a superhero, Gaydos cleverly sets every page with this thick, black border, effectively creating a smaller comic book page within each page, as if to remind us that this is a comic. That reminder highlights this arc as an origin for this new incarnation of the Black Hood, even as the issue itself subverts basically every trope we might associate with such an origin.

For his part, Swierczynski drives that origin story vibe home at the end of the issue, as Hettinger vows revenge on whoever framed him. It may have taken an issue or two to get our hero ready to take decisive action, but taking down a drug kingpin definitely feels like something a superhero would do. That’s not to say this series is necessarily tied to the conventions of superhero comics, or even that Hettinger’s Black Hood will ever really resemble a superhero, but there’s a lot of fun to be had in playing the expectations of a superhero comic against that of a crime novel — two genres Swierczynski understands very well.

The result is a mood quite unlike any other “superhero” comics on the shelves, offering a much closer look into the underworld even the grittiest comics are generally content to gloss over. It’s a dark, depressing world The Black Hood occupies, but it’s also one rich in detail, and promises a few surprises along the way. I can’t think of a more appropriate creative team to shepherd that kind of story into existence.

Mark! I understand that you really enjoyed the first issue. This one is decidedly less eventful, but I would argue hits its themes even harder. Are you excited to find Hettinger with a motive beyond “here’s a crime I can stop,” or would you be happier if his path to crimefighting was a little less circuitous?

Mark: Is anyone else reading The Black Hood and being reminded of the first two Max Payne video games? From the writing to the coloring, I’m getting flashbacks to Remedy Entertainment’s classic games (the third entry is by a different developer and is a very different experience). But even though Max Payne might be an influence, one thing that makes The Black Hood unique is just how bad a guy Swierczynski is allowing Hettinger to become. In the games, Max Payne’s wife and daughter are killed during a home invasion, and the bad guys are very clearly bad guys. The morality of The Black Hood is a lot more murky. Drew, I appreciate you putting the term “superhero” in quotes when discussing this book because even if Hettinger’s not a completely unsympathetic character, man is he far from being a hero.

It’s interesting that the main conflict at this point is being framed as one between the drug kingpin and Hettinger, since neither of them are on what I’d call the traditional side of good. Hettinger is a dirty, drug-addicted cop who should be kicked off the police force, or at the very least suspended. 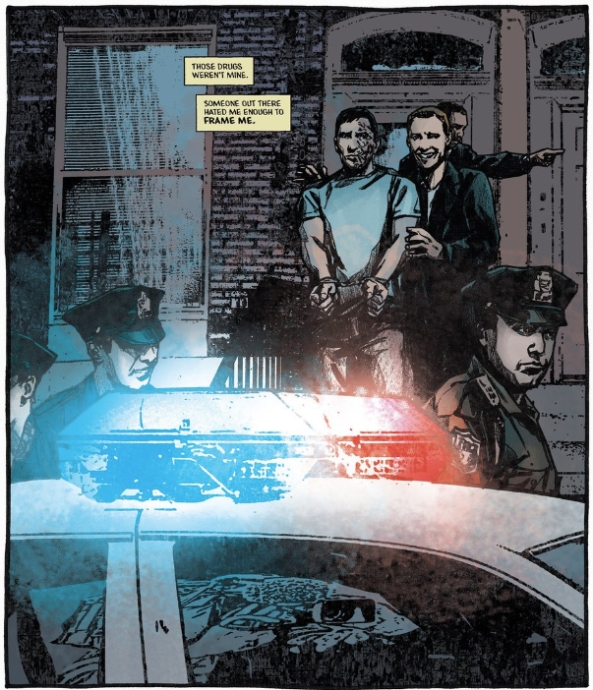 It’s not even that the drug kingpin framed him, exactly, since the term “framed” implies innocence. Sure, those may not be his drugs, but only because his stash is being kept on a nearby rooftop.

But at the same time the drug kingpin is a drug kingpin, so it’s not like he’s on the side of justice either. He wants Hettinger taken out because Hettinger is stealing drugs and screwing with his business.

So, yeah, can we even call The Black Hood a superhero comic at this point? Greg Hettinger doesn’t have any superpowers, and two issues in, he’s far from doing anything terribly heroic. For the reader it’s a fun sleight of hand that allows Swierczynski to have his origin story cake and eat it too. But with this foundation in place, I’m willing to believe Swierczynski is leaning hard into Hettinger’s awfulness upfront as a way to better subvert readers’ expectations later. While I doubt Hettinger will ever be fully redeemed, even anti-heroes have to be heroic sometimes.