Spencer: Every comic character has a certain formula inherent to their stories. That’s not to say that every Batman or Superman story is the same, but think about how often you used to see Batman entangled in a death trap, or nowadays see him facing the destruction of his city, or Superman duking it out with a heavy-hitter over Metropolis. There’s more than enough variations on these stories to stop them from all being rehashes, but my point is that I can often just glance at a plot synopsis and immediately tell, “Oh yeah, that’s a Superman story” or “Oh yeah, that’s a Batman story. ” Skottie Young and Jake Parker’s Rocket Raccoon 10 is one of those issues that fits every requirement for a Rocket Raccoon story to a “t.” It’s very much a “standard” Rocket Raccoon story, but in achieving that status, it’s lost any sort of identity of its own. Instead of standing out, it blends in, to the point where I feel like I’ve read this story before.

Our story finds Rocket with enough funds to finally pay back the debt he racked up way back in the first arc. Before he can do so, though, a contact passes along some information about the Book of Halfworld, an item Rocket’s apparently been seeking for quite a long time. Rocket skips out on paying his debt to buy the information, and ends up getting chased across Knowhere by the Intergalactic Police. He manages to escape and reach the artifact of Halfworld, but not before getting separated from Groot.

If that summary sounds a bit generic, that’s because it is. It feels like Young is going down a list of typical Rocket Raccoon plot elements and crossing them off one by one. Rocket owing debts and getting chased by the law? Check. A valuable MacGuffin for him to pursue? Check. A visit to Knowhere, a run-in with his rival Cosmo, made-up cursing, dropping the “Boom! Murdered you” catchphrase? Check, check, check, and check. There’s nothing wrong with any of these things — in fact, they’ve all made for memorable stories in the past — but the issue depends on these elements to the point where it never forges an identity of its own. Rocket Raccoon 10 is not a bad issue by any means, but it’s hard to justify its existence when it’s not saying or doing anything new.

That’s not to say that this issue is without its charms. Young’s dialogue is as witty as ever, and Parker and colorist Jean-Francois Bealieu’s art is fantastic from start to finish. In fact, the most fun I had with this issue was poring over the designs of the various aliens and weapons.

I need that submarine now, and I’m surprisingly taken by the design of Stan the squid accountant. He’s adorable, but still remarkably straight-laced and official-looking; I think its the little tentacle mustache that does it. Klep, Rocket’s contact, has a fun design too; Parker gives him this massive jaw and chin that contort into a wide variety of unique expressions, and there’s this sheen Parker and Bealieu apply to his skin that makes his appearance as slimy and slippery as his personality.

Much of this issue’s humor also stems from the art. I’m not just talking about sign gags or funny background details, but the way the visuals and timing help sell the funniest moments. I love when Rocket pulls a gun from the inside of his jacket and it suddenly (and impossibly) unfolds to three times its original size, stretching the panel with it. The punchline on the last page, which cuts straight from Rocket’s heroic pose as he arrives in Tower City to him vomiting over a cliffside, works because of the timing, how we never see Rocket get queasy — it’s funny because it’s so sudden. I think my favorite moment like this comes when Rocket knocks out Cosmo. 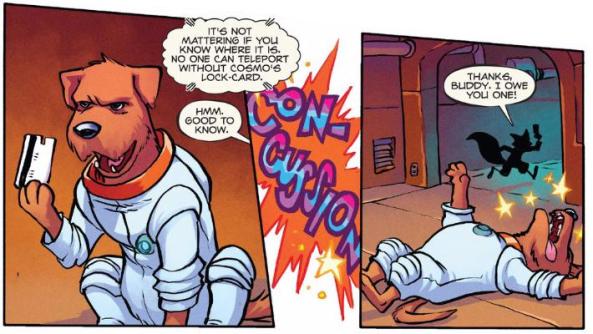 That “concussion” sound effect is comedic gold, but in the third panel Parker also knows to play the knocked-out Cosmo for laughs — and boy does he deliver — instead of actually hurting the poor guy. Actually, the fight scene between Rocket and Cosmo is another highlight of the issue, as much for Parker’s dynamic layouts as for the ridiculousness of seeing a talking dog and a raccoon fistfight. 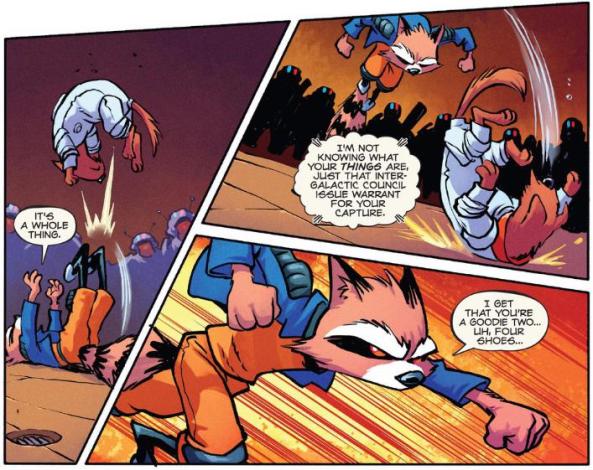 The slant of the panels here really helps sell the weight and momentum of the action. Rocket kicks Cosmo up into the wider half of the panel, and then Cosmo’s roll in the second panel and Rocket’s punch in the third both follow the slant of the gutter; Parker’s making sure the composition of the page leads the eye naturally through the action, making for a short-but-satisfying fight scene.

So as you can see, there’s a lot I enjoyed about this issue, and if I was coming into it with zero experience with the character, I bet I’d love it. But after nine issues of Rocket Raccoon — and especially after four or five particularly experimental issues — I just feel like I’ve seen this before. The title page bills this as part one of the “Bookends” storyline, but this issue doesn’t clue the reader in at all as to what “Bookends” will be about — this could be the beginning of almost any Rocket Raccoon story. There’s still time for the rest of this arc to take Rocket to new places, introduce the readers to new wonders, and reveal deeper facets of his personality, but for now, the predictability of the story puts a major damper on the proceedings.

Drew, I can’t help but feel like I’m being hard on a book I normally really enjoy, but so much of this issue feels like “ho-hum” instead of “hell yeah,” and I know Rocket Raccoon can do better. Do you have similar thoughts, or did you find more to love in this story than I did?

Drew: You’re not wrong about anything here, and while I can’t say that I found more to love, I might have found a bit more to forgive. I mean, sure, Rocket is doing all of the most Rocket-y things he can possibly do, but I think that’s totally okay as the first chapter of an adventure story. If we strip away all of the trappings specific to this character (and especially how he’s been approached in this series) and look at this issue a little more abstractly, it’s really just the “call to action” portion of the hero’s journey — that is, the single most predictable, wrote part of basically any story. We’re happy to forgive that kind of formal repetition because we understand it’s just a starting place — a “once upon a time,” if you will — and I only think it makes sense to extend that same forgiveness to the character work. Young and Parker are simply reasserting Rocket’s character by having him be Rocket. There’s definitely a pileup of Rocket clichés, but I think that’s the point; they’re trying to give us Rocket in a nutshell before sending him on an adventure that could change everything.

And I think that might be the piece you’re missing here, Spencer. The Book of Halfworld isn’t a simple MacGuffin, it’s the key to understanding Rocket’s past — something he’s also been searching for since the first arc (and probably before that). Actually, that this series is scheduled to conclude with next month’s issue makes me think that there’s actually a chance that Rocket will acquire the dang thing. It would certainly make for a nice piece of closure from a series that started with Rocket excited at the prospect of meeting one of his own kind. Of course, it may be telling that Klep’s photo is of a case for the book, and not the book itself.

It’s not clear whether this series will have another volume (or just pick up again) post-Secret Wars, but honestly, I wouldn’t put it past Young to end the series with Rocket opening up an empty box — he’ll never win!

Another key to my forgiving this issue some of its tropes is that it’s actually borrowing references left and right. The most obvious is the extended homage to the Star Wars cantina scene, where a roguish pilot and his lanky monster friend visit a bar, only to be rudely interrupted when the fuzz show up. I mean, the bartender even insists that “we don’t serve [Groot’s] kind here,” just in case anyone had missed all of the signs. I can’t really argue that referencing one of the most referenced scenes in all of science fiction makes this issue more original, but it does drive home the point that this part of the story really isn’t about originality. We get very broad strokes to give us the gist of the characters, their world, and their situation.

Then again, maybe this issue could have done more to get us invested in the Book of Halfworld. aside from vaguely remembering it being mentioned in previous issues, I couldn’t tell you anything specific about what it might contain. As it is, our hero’s motive beyond “I want that thing” isn’t particularly well-defined, leaving us only his decidedly familiar words and actions to hang upon. Without a clear understanding of the driving force, this becomes the very platonic ideal of a featureless, generic Rocket story.

Again, I think that’s forgivable in the first chapter of a story, but you’re absolutely right, Spencer, that such a generic beginning feels out-of-place after a series of such inventive issues. Young and Parker have shown time and time again that they can not only show who Rocket is during an adventure, but they can actually reveal who Rocket is through his adventures. Obviously, that’s the goal with any hero’s journey, but Young and Parker are particularly gifted at the kind of efficient storytelling that makes the notion of a sleepy first chapter feel kind of unnecessary.

Which I guess is my way of saying “‘ho-hum’ instead of ‘hell yeah,'” is a pretty good summation of this issue. It’s not bad, it just feels oddly generic for a series that has prided itself on being totally unique. I suppose that’s a fitting metaphor for the prospect of Rocket discovering he’s not the last of his kind, but if that’s really the case, I’d much prefer Rocket as the last son of Halfworld.