Uneasy lies the head that wears a crown

Ryan: It has been said that absolute power corrupts absolutely, and history remembers figures like this with no small sense of disdain. However, what of those leaders who came to reign under the most noble of intentions, who yet were forced to make decisions universally agreed upon as damnable? Jonathan Hickman and Stephano Caselli have taken readers on a convoluted and bumpy road in Avengers, and along the way have raised some sticky questions in regards to morals under duress. In this penultimate issue, we see how the crown of an empire and the Damoclean burden of genius can incite or deter an extinction.

Avengers 43 realizes the hottest InVasion angle since 2001. The Shi’ar Empire, under the command of Majestor Gladiator, resigned itself to pulling the trigger on destroying Earth to save the rest of the universe. In all fairness, Gladiator handles the whole “we need to destroy all of you” thing with no lack of aplomb and class:

Instead of dwelling on what the average terran does with their two hours to live, we see the Avengers in full crisis mode, seeing which tricks the planet still has up its sleeves. For a civilization which has squared off with more planet-threating challenges than Emperor Palpatine ever created at the Maw Installation, only two main defenses come into play: a Planetkiller starship refurbished from the Builder War and the Dynamo — an A.I.M.-developed thermal net plus vent which channels the “power of the Earth” into a discharge fueled by the conductive elements of nickel and iron. The Planetkiller takes a large chunk of the Shi’ar Fleet down before being dispatched by a massive kamikaze strike, as does the Dynamo before it overheats and blows up. These last-ditch attempts at salvation end up being about as effective as Ewok traps, because the Shi’ar ultimately retain enough ships to destroy Earth.

But then, there’s always Tony Stark. Liberated by T’Challah from his cubed incarceration at the beginning of the issue (which takes place, chronologically, two weeks ago), this comic belongs to him as much as it does any other character. It is fair to say that Tony has not been himself lately with his hubris levels charting over nine thousand. Though he never explicitly apologized for any of the behavior he displayed which turned the rest of the Illuminati against him, he seems to have one last urgent want: 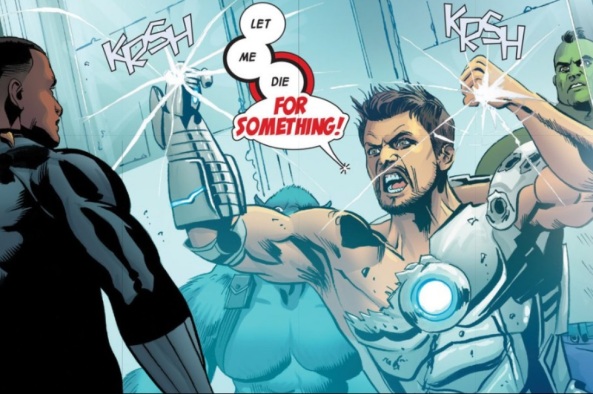 We seldom see Tony this desperate, hurt, and manic; it’s almost hard to believe. This is where we see Hickman’s brilliance take center stage. Steve Rogers and Reed Richards take a candid moment to discuss what’s going on with this broken Iron Man. Hickman wisely ties Stark’s behavior and actions with a sensible step of characterization: Tony will do anything, at any expense, to advance the human race. This explains all of the different kinds of Starks we’ve seen in the past, from the jolly one who just want to crack wise and work on his nano suit to the one who was ready to start a Civil War. Hickman always shines when writing super-geniuses, and I foresee the next issue will be no exception.

Readers of Avengers have seen Jonathan Hickman expand the team, destroy worlds, and explore some large questions about the black and white of duty versus the shades of grey found in morality. In a last-stand-heavy month from Marvel, Avengers 43 is a quick-paced read which revels in Hickman’s proclivities for intricately plotted dénouements wherein every plot development is grounded squarely in character. The cliff-hanger ending gives this comic a “big fight feel” and sets up 44 to be a must-read. Mark, were you able to get past the confusing chronology to the sweet, nougat center of this issue? Also, do you believe in the version of Tony Stark presented to us?

Mark: Sure, this Tony Stark makes sense to me, but all-in-all I liked this issue a lot less than you, Ryan. It’s no secret that I’ve been pretty hot and cold on both of Hickman’s Avengers books as they’ve drawn to a seemingly endless close. For every issue that really pops, there’s at least one other that either drags its feet or is done a disservice by Hickman’s detached writing style.

I feel like I’ve kicked the Hickman-as-detached-author can about as far as it can go, so I won’t repeat my quibbles here. Suffice it to say that Avengers 43 was both an invigorating and slightly infuriating read. Believe it or not, the first time I read through the issue I got to the end feeling like nothing much had happened had all. Yes, Gladiator informs humanity of its impending doom and Earth’s last hope, Tony Stark, is freed from his prison, but that all happens in the first five pages. The rest is essentially wheel spinning. Entertaining wheel spinning, sure, but wheel spinning nonetheless. For as cool as it is to see the Planetkiller in action/be destroyed, it’s a zero sum game. It appears, wrecks a tiny bit of havoc, then gets blown out of the sky. 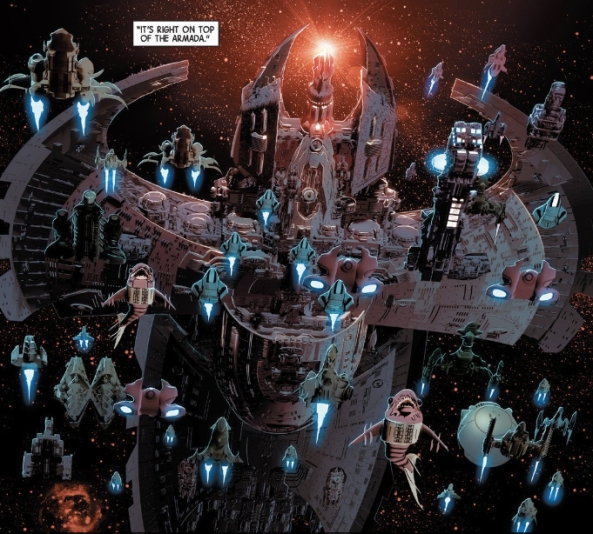 Look, I know it’s basically railing against the very nature of serialized storytelling to knock a comic book for barely moving the narrative forward and padding out the rest with inconsequential action, but here we are. Someone please correct me if I’m wrong, but this is the first time we see the glowing device Mister Fantastic hands off to Steve Rogers in order to summon the Planetkiller, right? So it’s not like it’s Chekov’s Planetkiller that we’ve been waiting to see how it pays off. It’s just an admittedly cool diversion that ends up having no real effect on the proceedings.

Despite my complaining, I find the sum of Hickman’s run to be worth the minor annoyances along the way. It’s just that the road to get to the end here has felt so prolonged that it makes me wonder how much reconfiguring Hickman had to do to match up with Secret Wars‘ May launch (or maybe it’s completely unrelated, and this was his plan all along). So am I excited going into the Avengers finale? Yes, absolutely. But am I sad to see Hickman’s arc come to an end? Not at all.

For a complete list of what we’re reading, head on over to our Pull List page.  Whenever possible, buy your comics from your local mom and pop comic bookstore. If you want to rock digital copies, head on over to Comixology and download issues there.  There’s no need to pirate, right?