Patrick: Dan Harmon and Rob Schrab (of Community fame) have a little pet project in L.A. called Channel 101. It’s a sort of DIY 5-minute-TV show festival/competition that takes place once a month at the Downtown Independent Theatre. It’s pretty cool, and the shows that come out of it can really run the gamut from brilliant to moronic, from sharp and professional to shaggy as hell. It’s an intense artistic environment, and the sense of community surrounding every showing is palpable. I was introduced to Channel 101 by our very own Scott Baumgartner, and the two of us (and my co-editor Drew) attended one of their events in December of 2012. As it was the end of the year, we weren’t going to just another screening but the end-of-year award ceremony called “The Channies.” It was still a fun time, but 90% of what occurred on that stage, and on that screen, played against everyone’s expectations for a Channel 101 event. It worked like gangbusters on the crowd, most of whom had been submitting shows to the competition for years. With the conventions and expectations of a Channel 101 show so well understood, the award show’s producers were able to crank out one well of a subversive experiences — even if it was 70% lost on me and Drew. The Unbeatable Squirrel Girl 4 takes our shared expectations for comic books and flips them all on their head, pitching Squirrel Girl herself as Queen of Subversion.

The issue begins at the end. The opening image is of our hero standing victorious over Galactus. This sort of flashforward-style of storytelling isn’t all the revolutionary, but it’s use here directly subverts popular uses of this convention in movies, TV and comics. Every single time you see one of those flashforwards, it’s to a character is immense peril, as though teasing the reader — promising that the story will get this good if you keep reading (or watching, or whatever). Consider the first episode of Breaking Bad: after that opening home-video, we spend 40 minutes wondering how Walt finds himself alone and half naked in the desert, confessing to murder and drug manufacturing. Or, to keep it in the world of comics, the first issue in the Zero Year story arc in Batman showed an almost post-apocalyptic Gotham — every moment afterward goes toward answering the question “how did it get this bad?” That’s not at all what readers experience here. We see Doreen taking a selfie and declaring how easy it was to defeat Galactus, the words “THE END!” teasing us from the bottom corner of the page.

The creative team commits like hell to this bit, even printing two pages of letters after it. Of course the story picks back up immediately thereafter, but I don’t think I’ve ever seen a letters page moved so early into an issue. My favorite part about returning to the story is that little Ryan North running commentary at the bottom of the page, which knowingly declares itself an unreliable narrator. It’s just so charmingly aware of both itself and our expectations for it. The story then starts to move into territory we may expect, now that we’re in a particularly subversive mood. Doreen decides the best way to stop Galactus is to become buddy-buddy with him.

That’s an inspired piece of cutesie Marvel fun-times, and under the pen of anyone less subversive, it totally would have worked. We find Doreen charming, so we expect that Galactus is equally charmed. And, really, he might be just as smitten with her as we are, but to quote the World Devourer, “a dude’s gotta eat.” Even during that interaction, North and Henderson tickle our expectations with images that we might already associate with Galactus, complete with Silver Age coloring and inking techniques. 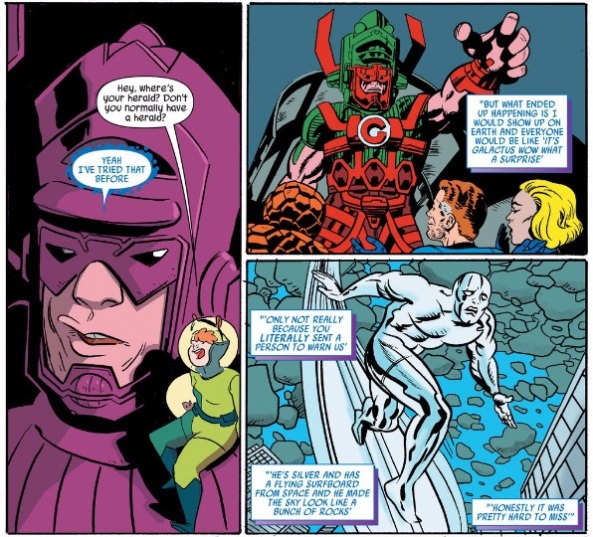 I’m not sure whether those two panels are drawn by a different artist or not, but it looks like Henderson puts her own stylistic quirks in check for just a moment to deliver something that looks like it came out of a 1967 issue of Fantastic Four. The cover to this issue plays a similar game, depicting beautiful pixel-art version of Squirrel Girl and Galactus as though they’re going to duke it out in between rounds of Street Fighter III. Once again, that’s playing with the idea of expectations, now through visual cues rather than unexpected beats in the story.

When Doreen does come up with a solution, it’s delightfully cheesey and is — of course — based on finding a planet full of nuts for Galactus to eat instead of Earth. Doreen is even quick to point out that this is what Galactus does: he only comes to Earth because he knows that Earthlings will always find another planet for him to eat as an alternative. It’s sort of adorable, and it’s a solution that by all rights, we should be able to see coming, seeing that it a) involves nuts, and b) has been used to divert Galactus in the past. However, by this point in the narrative, the audience is too mesmerized by how well North and Henderson are juggling conventions and subversions to even know what’s coming up next.

Taylor, I thought this was a spectacular issue. Doreen is such an unusual character and Squirrel Girl is such an unusual hero, and I love that North and Henderson are down to give us a comic that is similarly unusual. Did you enjoy this issue as much as I did? What do you think about Nacny discovering Doreen’s secret? She’s totally going to be Squirrel Girl’s tech-support, right? That’s not very subversive! Oh, and how about this acorn-good-idea-lightbulb?

Taylor: It’s fucking wonderful. I want to decorate my house in strings of lights that all look like nuts. Then I’ll have squirrels all up in my business and that will be a delight. As for Nancy being the techie, I could see that playing out, but if we’re talking about subversions, let’s think about something a little different. Maybe she will indeed be SG’s sidekick, but maybe she’ll wear that suit made out of squirrels. That would be unconventional for sure because a) suit made out of squirrels and b) aside from Venom, how many heroes have a suit made out a living thing?

All in all, yes, I really enjoyed this issue, mostly because the characters are so damn likable. Doreen is definitely the main draw here but in this case she brings the best out of Galactus as well. This goes to show what might just be one of Doreen’s most powerful abilities: to see everyone as real people and to bring out their best. In the case of Galactus, we’re used to him basically being a giant, purple and impersonal evil. It’s hard to like him, sure (because of the whole planet eating thing) but it’s also hard to hate him because he’s so bland. Doreen, however, takes the time to get to know Galactus and it turns out he’s not such a bad dude.

Not only is he a pretty chill guy, but it turns out he basically just wants to eat. From experience, we all know what it’s like to be hungry and the anger that can come with it. Given that, is it any wonder Galactus seems to be in a foul mood whenever he appears in other comics? Also, Squirrel Girl begs the question: has anyone ever just tried talking to him before to see what’s up? Turns out that’s maybe the best route. Viewed in this light, Doreen is perfectly suited to take on Galactus because she’s just so charming.

The unlikely friendship between Doreen and the Eater of Planets is at the heat of this issue and I love they way Henderson shows their goofy friendship unfold with SG moving from Galatus’ foot to sitting on his shoulder like a parrot. However, the image that most sticks with me is when they share a quiet moment and contemplate the Earth. 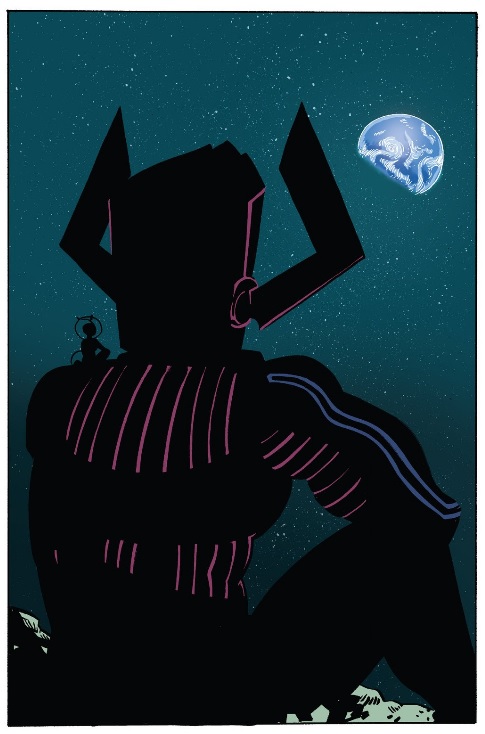 Who’s to say exactly what is going through either character’s head at this point. Does Galactus just see the equivalent of a floating pizza? Is Doreen super worried about Earth or as happy-go-lucky as she appears? Whatever each may be thinking it’s clear they are sharing a bond here. What makes this a beautiful panel is that we’ve all lived that moments with friends and loved ones ourselves. We know what that moment feels like and by hovering our viewpoint over Galactus’ shoulder, the viewer feels a bit like they’re in that moment with he and Doreen as well. Also, the image is just tasteful. I like how we get some of the colors of Galactus’s suit to add some color to the page, but just enough to keep things interesting. In general, the muted colors serve to put us in a meditative mood, just like those in the story.

This a fun issue and it subverts itself at every turn if for no other reason than it constantly thwarts what we expect it to be. I can’t wait to see what subversion lies ahead!

7 comments on “The Unbeatable Squirrel Girl 4”