Spencer: Batman 40 is a dense issue. I’ve lingered over this issue in a way I haven’t lingered over a comic in quite a while. Every page is rich with meaning, both in the writing and the art, and it would take far more space than Patrick and I have allotted here to fully unpack it. Let me assure you all, though, that doing so is more than worth the time and effort. Batman 40 is a masterpiece that can be enjoyed on numerous levels, and I think it’s an issue we’re going to be dissecting for a long time to come. So let’s get to it.

Batman, his allies, and his villains are still fighting through the Jokerized mob in an attempt to extract some dionesium from Joker’s spine. A handy fastball special from Bane gets Batman in close, but alas!, Joker’s dionesium was never potent enough to make a cure. The Joker taunts Batman with the knowledge that the pure dionesium is hidden deep in the tunnels beneath Gotham, but when he unmasks Batman he only finds… Dick Grayson?!

In retrospect, it’s astounding how clearly this Batman’s identity is telegraphed. Writer Scott Snyder provides no internal narration for Batman during this sequence, and artist Greg Capullo imbues him with an appropriately acrobatic fighting style, yet I never caught on. Maybe I was just distracted because this fight scene is just so balls-to-the-wall awesome — Snyder and Capullo craft some truly iconic moments for several of the characters present, all backed by some of FCO Plascencia’s most extraordinarily offbeat-yet-appropriate colors. It’s breathtaking, but guess what? It’s just the prologue.

As Dick distracts Joker, Batman is searching the tunnels beneath Wayne Manor for the source of the dionesium. Just as he finds the pit, though, Joker catches up to him, and the two duke it out in a fierce battle of both words and fists, ending the only way it ever really could have: with the Joker and Batman seemingly dying together. 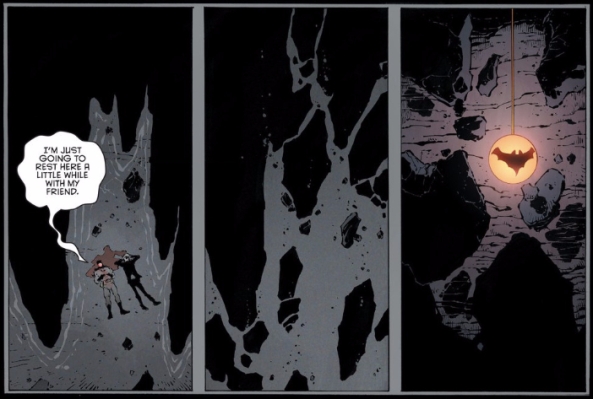 To be honest, I could probably spend the rest of my word count examining this image alone. That last panel is so evocative — that mapping orb truly looks like Batman’s soul ascending to heaven as the world crumbles around him. I don’t think I’m too far off, as this orb is the same one Bruce was given by his father and eventually used to discover the Batcave — that orb has been present for some of the most formative moments in both Bruce Wayne and Batman’s life, making it the ideal totem to represent the life he’s lost. The fact that it’s also full of the dionesium Julia needs to cure Joker’s victims just reinforces how Bruce is heroically sacrificing himself to save others.

The image of Batman and Joker dying together as “friends” is pretty loaded in its own right. All throughout “Endgame” Snyder’s played the Joker like Batman’s jilted lover, and that comes across more plainly than ever during their final confrontation. “Endgame” has featured a Joker who has largely been quiet and deadly efficient, but now that he and Batman are face-to-face, he can’t help but to monologue — even though he supposedly hates Batman and wants to finish him off, he still wants Batman to understand him, or perhaps to make him immortal as the Joker may now be. Even the injuries he deals to Batman start to transform him into the Joker!

Yet, when Batman starts embracing his more Joker-esque side, it freaks Joker out. He can’t deal with a Batman who embraces Joker’s dirty tricks and begs him for forgiveness — it isn’t the Batman Joker “fell in love” with. In a way, this may be Batman’s ultimate victory — earlier in the issue the Joker mentions how the joke was on him when, despite fighting for “meaninglessness,” the fighting itself gave his actions meaning, and that’s exactly what Batman does in the climax of the battle when he turns the Joker’s own methods against him, giving a heroic connotation to methods Joker had devoted to evil. It’s a victory that continues even after his death. 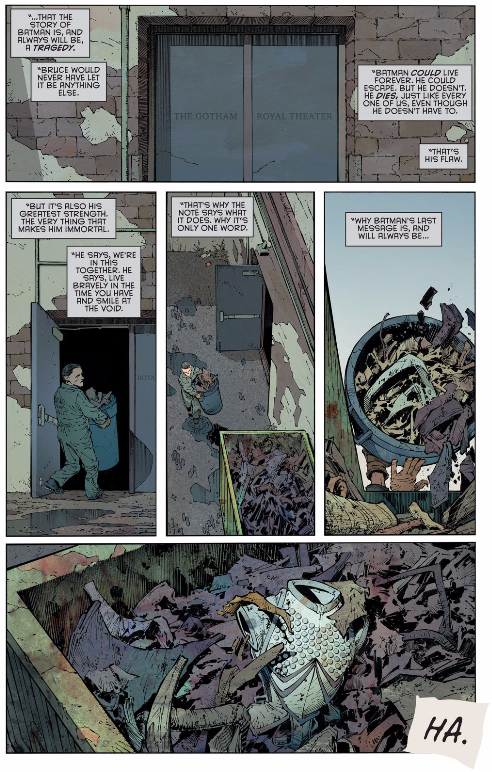 There’s a bit of “everybody dies” nihilism present in Batman’s philosophy here that reminds of the Red Hood’s cynical views on humanity back during “Zero Year.” Yet, while Joker, as the Red Hood, used the inevitability of death as an excuse to hurt people, Batman uses it to inspire people to use the time they have left on Earth wisely, and it’s yet another inspired inverting of the Joker’s methods. Even in death Batman gets the last laugh over the Joker, and I mean that literally — by leaving a dying message of “Ha,” Batman literally gets the last laugh on the Joker.

Of course, I’ve never been a fan of the whole “Batman having a kinship with Joker” concept, even in classics like The Killing Joke — Joker’s simply killed and maimed too many people who are important to Batman for that to be an appropriate emotion — so I appreciate that Snyder and Capullo provide some alternative interpretations to Batman’s actions. Is Bruce just bluffing to piss the Joker off and buy time before the dionesium pit is destroyed? Or perhaps he’s been driven insane by the stress of the battle? I mean, the very first page of the issue literally shows Batman’s head filled with thoughts of the Joker — it’s enough to drive anyone a little batty.

Hm. Patrick, despite my rambling, I’ve only barely scratched the surface here. What’s your take on the relationship and the final battle between Batman and the Joker? Did you catch onto any symbolism I overlooked, and specifically, what do you think the armor in the dumpster in the issue’s final panel represents? I’m at a loss with that one. Also, I didn’t get nearly enough opportunity to elaborate on Capullo’s inspired staging and action — care to pick up my slack? Seriously, this issue is phenomenal in pretty much every way, and I’m half-tempted to steal your reply just so I can keep talking about it. It’s that good.

Patrick: Wouldn’t that be funny? One of these days the schedule is just going to read “Spencer and Spencer on Batman 83.” You’ve prompted me with a lot of questions, so let’s start with the one that seems the most transparent to me — that final sequence, and the meaning of the armor in the trash. If  you recall, that’s a little piece in the Gotham Royal Theatre collection that was made possible by a grant from the Wayne Foundation in the wake of Zero Year. We get some Batman voiceover early in “Endgame” explaining that this armor, and its attendant flight rig, were essentially for Deus Ex Machina, physically elevating actors to the level of Gods and so they can solve the other characters’ problems. That was intended to be inspirational, reassuring the citizens of Gotham that there was always going to be someone out there to save them. That’s largely what we believe Batman to be — Gotham’s savior. But Batman’s not a god, and the last two big Snyder-and-friends stories have relied heavily on the idea that Gotham City has many saviors and no single God. That’s why that harness needs to be tossed: the idea of One God To Save Gotham is outdated.

I’ve also got some thoughts on the relationship between Batman and Joker — all of them half formed, so apologies there. First, I like dialing down the “lovers” language — Batman says “I’m going to sit with my friend for a while” which puts their relationship into terminology that I’m more comfortable with. Love is just so connected to sex, and there’s very little room for sex in either of those characters. Second, I think the characters may see each other as friends because they both represent ideologically purities — they just happen to be on opposite ends of those various spectrums. I find this much more appealing than the old Battle Buddies hypothesis, which seems to suggest that they have a kinship simply because they’ve been playing together for so long. The third point I want to make is also the least defined, and I look forward to Drew picking it up in the comments: Batman and Joker’s relationship represents the creative relationship between their creators, Bob Kane and Bill Finger.

Finger’s name has been floating around in connection to Snyder and Capullo’s version of Joker since the close of that Red Hood portion of Zero Year. “Liam Distal” was a potential identity for Red Hood (and therefore Joker), “Liam” being the Irish variant of “William,” the formalized version of “Bill,” and “Distal” being a medical term with refers to the thing at the end of an appendage (such as a foot, a toe, a hand, a FINGER). The issue opens on a traumatic recap of Joker’s origin.

We’re just seeing snippets of the action here, but the copy suggest that this is a moment Batman replays in his head over and over again. “Sometimes, in your mind, you get there. You’re fast enough. You grab him.” But Batman also isn’t totally comfortable committing to the idea that he created Joker. He says that Red Hood “let himself fall…like he knew. Like he was laughing at you from the start.” Joker — or Red Hood or Distal or Bill Finger, or whoever — had an active role in Joker’s origin. Despite popular opinion, Batman didn’t create Joker and Joker didn’t create Batman, they both created themselves together.

Goddamn, Spencer, I gotta shift gears at the risk of not mentioning the art at all. Capullo is a master — no question. You mention how we maybe should have been able to pick up on Batman’s identity in that opening fight, and that reminded me of that large splash panel on the title page, which shows Dick delivering a crowd-clearing jump-kick. I knew I recognized that kick and that composition from somewhere, but where?

That’s not Joker kickin’ like Grayson (ooooh, who wants to be in my new wave band: “Kickin’ Like Grayson”?), that’s Dick in disguise. Capullo is calling back imagery from issue number one. (Also, look how much fun it is to look back on this — Capullo hadn’t yet had the opportunity to redesign all of these New 52 Batman Rogues, so Riddler’s got this weird question mark mohawk, and Clayface isn’t quite the hulking presence he’d become later. Pointedly, Clayface isn’t even as imposing as he is in the image I posted from Batman 40. Capullo gets to populate that scuffle with a bunch of his designs and redesigns: Croc, Freeze, Penguin, Blue Bird — it’s rad as fuck.)

Alright, no doubt we have to talk about what this means for Batman going forward. There are spoilers swirling around the internet as to the identity of the man behind the bat-mask in promotional materials, and it looks like we’ll be getting some of that information in-print as early as Free Comic Book Day (this Saturday!). We can get more spoiler-y in the comments, and make our proclamations about whether we hope these deaths “stick” or whatever. I’m mostly excited for a new era that doesn’t pit god against the devil, but good people against bad people. Gotham’s got more than its fair share of both.