Patrick: There’s one question that keeps rolling through my head in reading FCBD issues: who is this for? For retailers, the purpose of the event is self-evident. Stores get throw fun little parties and get some extra bodies in through those doors. And comic fans get to have their own little celebrations as well. But when I’m back in my apartment and it’s just me and books, I can’t help but wonder about everyone’s experience with their new free comics. Did the twelve year-old with Batman on his shirt get a kick of Divergence 1 because it was the “robo-Batman one?” (Those are the comic store employee’s words, not the kid’s). Were any new life-time fans born today? Or were some potential fans alienated? And what about those of us with extensive pulls? Did we get something out of this? Who are these comics for?

Patrick: With a new movie in the theatres, the absolute gotta-have-it-I-don’t-care-who-you-are book was All-New, All-Different Avengers. The group’s line up is fun and approachable, and even features characters from so many levels of the Zeitgeist. Did you hear an NPR story about Thor being a woman now? There she is. Did you learn about Ms. Marvel on Tumblr? There she is. Did you just meet Vision in Age of Ultron? There he is. Even the deeper cuts — like Nova or Sam Wilson as the slightly birdified Captain America — are fun, colorful and appealing. Plus, rather than delving into the events that made this particular group of characters assemble, writer Mark Waid gets right into the business of telling a story about them saving the day. Nearly everyone on the team displays at least one of their powers and one of their personality quirks in the 10-page story, but always in service of foiling a bank robbery. Artist Mahmud Asrar renders all of this action in a style that’s even more cartoony and approachable than usual, making the whole package the most effective ambassador for superhero comics you could reasonably hope for.

I even found the Uncanny Inhumans story which followed to remarkably deft at dramatizing exposition rather than simply spitting it out. How did you find it, Drew? Will you put this issue in a new reader’s hand or will you hoard it away in you piles of dragon gold?

Drew: It’s interesting, isn’t it? Every one of these characters has an insanely convoluted origin, but none of it actually matters here. We don’t need an intimate understanding of the Ultimate Universe to get that Miles Morales is a Spider-Man with more experience than his teen peers and the ability to camouflage himself, nor do we need to have ever heard the name “Carol Danvers” to understand that Ms. Marvel is a superhero-obsessed superhero with the ability to grow at will. Waid manages to make these characters totally approachable without ever veering into clunky exposition. It’s a great introduction that reads just as well to longtime fans, and gives me a lot of faith in this team — both the creators and the Avengers — going forward.

Uncanny Inhumans largely accomplishes the same feat — along with some striking art from Brandon Peterson and colorist Justin Ponsor — though the ending twist is really only going to mean something for folks already familiar with Johnny Storm and Medusa. But for those already familiar with them: holy cow.

We’ve been singing the praises of IDW’s Teenage Mutant Ninja Turtles for as long as we’ve been reading it, so I was thrilled to see a FCBD issue designed to bring in new fans. The issue can feel a bit exposition-y at times, but will adequately catch readers up to issue 46, due out next month. That’s not to say that there’s nothing for longtime fans — there’s some quiet reflection with Splinter, a sizable fight sequence, and a taste of what mecha-Donnie is like, all rendered as gorgeously as ever by Mateus Santolouco — just that it wears its aspirations of approachability openly. It’s by no means equivalent to a full issue, but it certainly should serve as a great ambassador for the series, acting as both a history lesson and taste of what’s to come.

Patrick: Yeah, and I tended to be more on-board with the history lesson when it was explicitly presented as such. Splinter can meditate on the deeper themes of the series and catch up on the first year or so, and it all feels very natural. In fact, it emphasizes his role as the teacher and places the reader in the role of student. The recap-a-rama loses much of that thematic relevance when Leo, Mikey and Raph are just telling each other about the characters and relationships regular readers are already familiar with. It’s also a weird sensation to see so much of that old (but consistently amazing) art repurposed for catch-up purposes. Those really heartrending moments — like Donny laying beaten and broken on the floor — are almost trivialized by it.

But like Drew says, there’s more than enough original Santolouco art in here to make it worth the price of admission… so to speak. Anyone looking to get a taste of TMNT’s excellent senses of motion and humor need look no further than the brawl with the Purple Dragons. 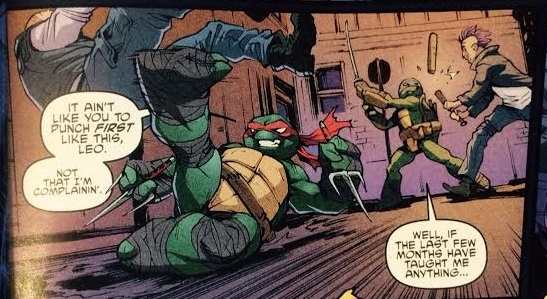 Drew: On basically the other end of the fun and approachable spectrum is DC’s Divergence. In their introduction to the issue, Dan Didio and Jim Lee express their excitement in presenting “three major changes in [their] most iconic characters,” but all of these changes work to undermine what makes those characters iconic. For Batman, that means forgetting the cape, the cowl, the gunshots in the alley, the cave, the utility belt — basically anything a child might explain when talking about “Batman.” For Superman, that means taking away his secret identity — effectively robbing Superman of both identities. And for…the Justice League (which I guess counts as one of DC’s most iconic characters), we learn the other half of the parentage of Darkseid’s daughter.

There’s nothing wrong with shaking up the status quo — see our discussion of the literally all-new, all-different Avengers above — but all of these stories serve as rather pointed consequents of antecedents posed at the ends of the issues 40 of the three respective series. Without reading those issues, readers will have no idea why Batman is dead, how Lois Lane learned that Clark Kent was Superman, or why we’re supposed to care about Darkseid’s daughter. Again, not knowing the backstory isn’t inherently bad, but those questions need to be displaced with fun, which this issue decidedly isn’t. Dour and bleak through-and-through, it’s hard to find much redeeming here.

Patrick: Or anything all that revelatory. The last time we mustered a conversation about DC’s FCBD issue, it was that New 52 Trinity War thing and it at least had us going with some intriguing promises about the future of the line. And I guess this does some of that same kind of prophetic hype-machine stuff: Green Lantern sacrificing himself, Lex screaming about an absent Superman, Shazam and Cyborg… being buddies? Look, some of the prophecies are more engaging than the others. But most of that Justice League story is redundant to what we see and understand in Justice League 40. However, without a huge investment in these characters and their mythologies, I’m not really sure how this would be an engaging read for any new readers.

The sole exception would be Gene Luen Yang and John Romita, Jr.’s Superman story, which manages to tell a complete narrative and deal with some fallout in a few short pages. The particulars of why Superman is depowered and outed are sort of irrelevant, and those facts are conveyed within the first couple panels. The timing is also fortuitous, as the citizens of Metropolis seem to have an attitude toward Superman similar to what we’re seeing in that Batman vs. Superman trailer. 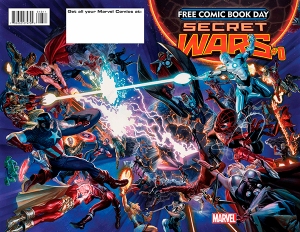 Still in the same vein, but much more successful at welcoming all-new, all different readers is Marvel’s Secret Wars 0. Jonathan Hickman doesn’t so much crank out a story as deliver one hell of a charming scene of Valeria Richards giving the Future Foundation a pep talk regarding the secret space-life-raft they’ve been working on. Hickman has a penchant for writing obnoxious geniuses well, and that sort of thing is all the more enduring coming out of the mouth of a little girl. Artist Paul Renaud nails the acting on every single one of the FF kids, giving Val that super high status posture, and somehow communicating that Bentley-23 is posturing with that same basic stance. The plotting is no less inside baseball than Divergence, but the sheer weirdness, energy and humor of the first page is enough to intrigue anyone. There are two pages of recap, but after 44 issues of Avengers and 33 issues of New Avengers (plus Infinity and its attendant tie-ins), a little history lesson was refreshing even for me.

Oh, and there’s also a Marvel / Attack On Titan crossover story in here. That’s obviously going to appeal to AOT fans, but seeing as those words don’t appear on the cover, I’m not sure why those fans would have picked this up…

Drew: And as someone who picked up the issue for Secret Wars, I’m not sure why that crossover was included, either. But whatever — this issue scratched that Secret Wars itch, even if it doesn’t really clarify what exactly this thing is going to be. We saw Reed and T’Challa working on the plans for this life raft back in Avengers 42, and I like that they’ve completely handed off assembly to the Freedom Foundation kids. Desperate times call for desperate measures, right? Still, this feels oddly like a “Jack’s Tattoos” for the life raft — an explanation of a detail that ultimately doesn’t tell us anything about why heroes will be battling against alternate versions of themselves in just a few short days. It’s not bad, necessarily, just a weird kind of hype for what’s going to consume almost the entirety of Marvel’s line for the foreseeable future.

The conversation doesn’t stop there, because you certainly read something that we didn’t. What did you pick up on FCBD that you want to talk about?