Ryan M: The quote above is one of those pat and reductive Pinterest quotes that is difficult to attribute and employing a double negative, but totally I believe it. Empathy is the primary benefit of story. As a consequence of our consciousness, we live in our own heads, seeing through our experiences. How — without narrative — are we to relate to something as foreign as someone else’s pain? I apologize for being so heady, but these are the things you think about when considering Stormer, keytar player in Jem and the Hologram’s rival band, the Misfits. 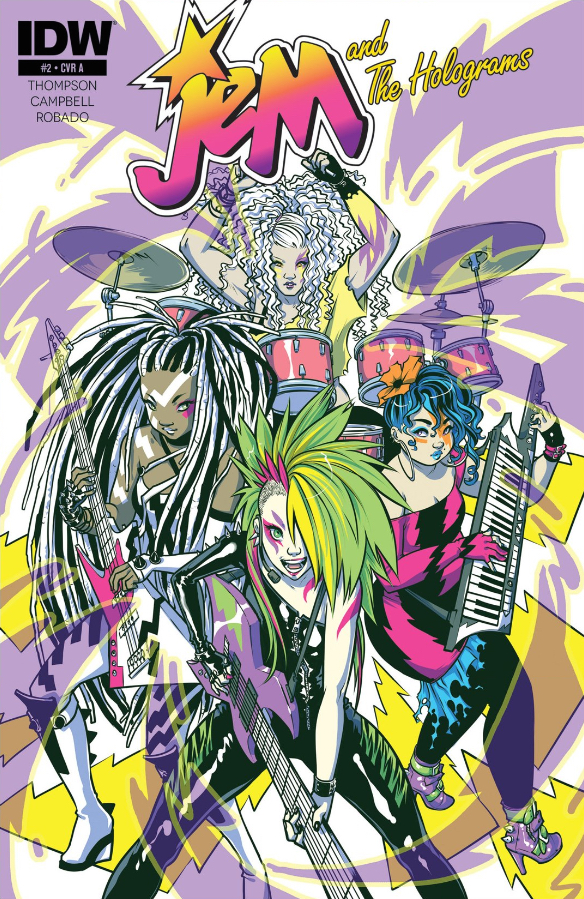 In addition to Stormer, Pizzazz, Jetta, and Roxy, the issue also introduces Rio, a music journalist working on an article about them. Meanwhile, Jem and the Holograms are enjoying literal overnight success. Their video is racking up the votes and they book a gig at a fundraising event for their community center. There are also hints of romance. A charmed Rio makes a date with Jerrica and Kimber giggles over coffee with Stormer, not knowing that Pizzazz and her crazy eyes are about to ruin the moment.

Speaking of crazy, what is up with the green skull monsters? They surround Pizzazz after she sees Jem and the Hologram’s dreamy anthem. Later, one appears with Ashley when her music lesson with Jerrica is cut short. Is the skull monster marking bad feelings in general or is it specifically anger about Jem/Jerrica? Either way, I’m excited about the possibilities that this kind of story-specific shorthand could generate. Also, it’s a useful way to monitor my own behavior. If I imagine that I have a green skull monster by my face, I’m acting like a jerk and should stop it or at least cut Jerrica some slack.

The Misfits’ character design reinforces something I noticed but didn’t mention in the last issue. Both bands are made up of women with a variety of body types. The OG Holograms and Misfits were all built like Amazonian supermodels and, while I have nothing against tall girls with slender builds and delicate features, (some of my best friends are Heidi Klum-like), the inclusion of more diverse bodies rocking amazing clothes and wild makeup make the fantasy accessible to more people. Jem and the Holograms are about showing off your best self and being truly outrageous. That’s a good life goal for anyone. 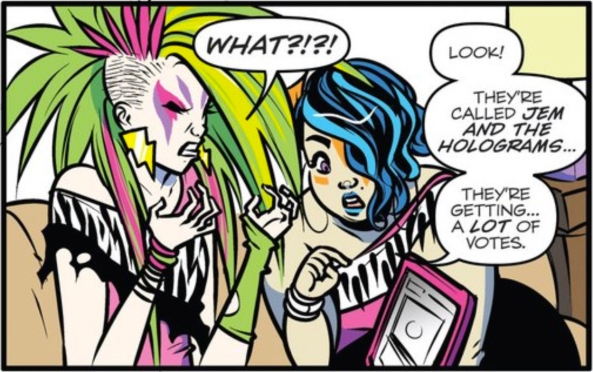 The Misfits, and Pizzazz particularly, function as mirrors to The Holograms. While Jerrica’s insecurities form her greatest weakness, Pizzazz’s hyper-confidence alienates everyone she meets and borders on foolhardy. In fact, given her attitude, it seems that the Misfits set up the “Misfits Vs.” competition as an exercise in vanity, or as Pizzazz says, a desire “to dominate.” In fact, Pizzazz dominates every panel. Her green, spiky hair pulls focus in the same way her bratty attitude affects everyone around her. On any given page featuring the Misfits, Pizzazz’s hair is the most vibrant thing. Notice how it seems to jab at Stormer on page 12. Compare that to the way Shana’s purple curls act like an extension of the hug she gives her sister on page 20. There is a warmth among the Holograms, that contrasts nicely with the Misfits’ aggressiveness. The green spikes also form the backdrop on the first page of the issue, the first of three splash pages featuring the Misfits’ hit single Attack of the Night. 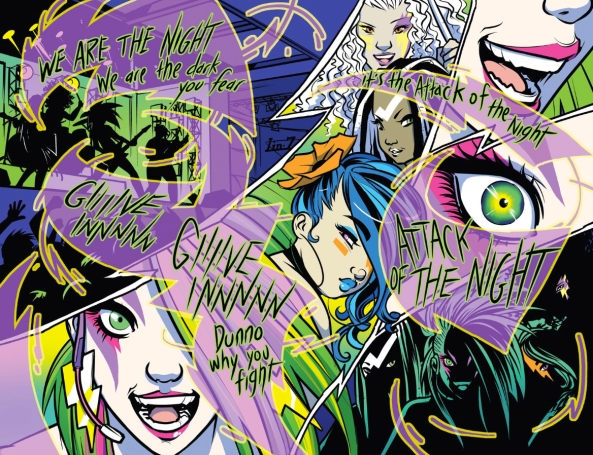 One of the biggest challenges with translating Jem the TV show to a graphic format is how to communicate pop songs on the page. Y’know: where there is no sound. There is no risk that these songs are going to be ear worms, but do these pages function within the narrative? Certainly, using a three page “song” about darkness and metaphorical illness differentiate the Misfits, but any scene where Pizzazz interacts with other people gives us that. What both performance sequences offer is style. They are pages with movement, vibrancy, and lower-p pizzazz. They also highlight some of the similarities between the two groups. While their attitudes are different, they are both made up of badass chicks with crazy make up and a desire to rock. Jem and the Holograms have a secret weapon in terms of a magic computer that lets them play their song as goddesses, but in the real world, it would make sense to be fans of both bands. I would be.

I do not feel that way about Rio. His introduction as a reporter unimpressed with the Misfits works on some level, though I’m not sure that it’s ever a good idea to laugh in the faces of your subject or tell them they’re screwed. That was not a technique they taught in J-School. He cyber stalks Jerrica and later asks her to dinner. Are we supposed to take his behavior at face value? He tracks her down to that community center before he knows that she is talented or adorable. What conversation did he want to have with the random manager of an up and coming band? He must see that Jem and the Holograms would make for a better article than “Misfits Win in Foregone Conclusion.” Plus, he is pretty pushy when it comes to getting her to commit to a date. That said, aggressive pursuit and light begging is likely the only way for Jerrica to meet a guy. This is not a girl putting herself out there. Setting up a Tinder profile would give her hives and, possibly, a panic attack.

Patrick, am I just being suspicious or did you see something fishy in Rio’s motivations? Also, how do you feel about the way the songs are handled? This is only a second issue, but we are still in set up mode. Is the pacing working for you?

Patrick: Oh, interesting. My memories of the Jem cartoon are hazy at best, and somewhere halfway through this issue, I decided that I must have been misremembering it as an action cartoon. What you’re identifying as “set up mode,” might just be what the series is. As much as my comic-addled brain might be expecting the Holograms to turn their newfound powers of disguise and fame to fight crime (or whatever), it’s possible that playing songs and dealing with the modern realities of fame. Think about how spectacular those song pages are — that’s Jem and the Hologram‘s version of a fight scene. Check it out: this issue opens with a song, the only multi-page splash is a song, and our hero has to assume her secret identity to perform one. If you just swap out music for fighting, you’d have a superhero story.

Complete with love interest. Ryan, you’re totally not wrong to be wary of Rio. Not only is dude manipulative, he’s just a touch too cool for school. His design sort of half-commits to the general aesthetic of the series — that shock of purple hair fits right in, but that jacket and sensible pants mark him as an outsider. Plus, even when he’s being resourceful or offering advice, it’s tinged with a more than a little creep. That warning about twitter-weirdos might as well be followed up with “I should know: I am one.” Though, it also possible that we’re supposed to see this as a similarity to Jerrica who can only go all glamsies when she’s pretending to be something else.

I have to admit that I’m totally charmed by how little conflict is in this issue. Sure, Paz flips her shit a little when she starts counting plays on the Hologram’s video, but everyone is basically getting what they want in this issue. Rio’s getting a story, Kimber’s spending some quality time with Stormy, and the Misfits Vs. contest seems like it’s going to be a run-away success. Writer Kelly Thompson and artist Sophie Campbell inject a little artificial conflict back at the Hologram’s apartment: Aja doesn’t like being woken up.

Even that’s not real conflict (the second shoe is thrown for laughs). And then there’s the Community Center benefit, which seems to be in danger for a split second, but before the organizer can even explain the problem, Jerrica’s there with a solution. Easy peasy.

(Last month, I mentioned that Jem and the Holograms feels a little bit anachronistic, with the instrumentation and appearance of the band being pretty specifically dated to the 1980s. The whole “community center is in trouble” plot point feels like it’s lifted straight out of an 80s teen ski movie. Even with the modern touches — like a savvy understanding of both YouTube and Twitter — this feels like an expression of the era in which Jem fans were children. I can only assume that Thompson and Campbell count themselves among those ranks.)

I’m looking forward to seeing the spectacle next month when the Misfits and the Holograms are playing against each other. I mean, if a music video is like a fight sequence, then a battle of the bands has to be a like a battle royale. Colorist M. Victoria Robado and letterer Shawn Lee turn all the music scenes into fireworks displays, with a distinct style and color palette for each band. While I’m digging the leisurely, conflict-free pace, it’ll be super fun to see those styles butting heads. But that’ll have to wait for next month.