Today, Patrick and Spencer are discussing The Wicked + The Divine 10, originally released May 6th, 2015.

You know what hope is?
Hope is a bastard.
Hope is a liar, a cheat and a tease.
Hope comes near you?
Kick its backside:
Got no place in times like these.

Patrick: The world of The Wicked + The Divine posits that everyone wants something just beyond their reach. Fans just want to connect with the gods, the gods just want to live a little bit longer. Their goals always seem tenable, but for the simple fact that they aren’t. This extends directly to the reader — ten issues in and we should be able to speak more definitively about whether Lucifer killed that judge, but we can’t. This issue explores the gulf created by what the characters want, and only sheepishly celebrates what they have.

This fan event looks — very transparently — like an outdoor music festival. Writer Kieron Gillen and artist Jamie McKelvie basically have two speeds when it comes to fans: comics and music. We’ve seen previous issue focusing on Comic Con-esque gatherings, complete with booths and panels, and we’ve seen smaller events in clubs that more closely resemble rock shows or raves. This setting is an order of magnitude bigger, and the potential for genuine chaos grows exponentially in front of this backdrop. There’s a lawlessness that comes with enormous music festivals, some of it romantic and some of it terrifying, but all of it unpredictable. It’s the perfect place for Something Big to happen.

And that Big Thing is Baphomet trying to make good on the bastardized version of the Prometheus Gambit that Ananke clued him into last issue. The gist of it is that he has the opportunity to extend his life by taking the life of a god. In this case, he’s aiming for Cassandra, a.k.a., the Twelfth Member of the Pantheon, a.k.a., Urdr, the Seer. Baphomet’s got some personal beef with Cass, but the opening page makes it clear that Morrigan is egging him on. When Baphomet makes his move (in front of a crowd of people and gods, because he’s an impulsive idiot), Morrigan swoops in, foils his plan, and then spirits him away to the underworld before any more serious reprisal can fall on him.

There are so many hopes that fizzle out in that moment, but the most obvious is Cassandra’s hope that she can disabuse the fans in attendance of their ravenous fandom. Her performance is one of those McKelvie genre-breaking masterpieces — starkly black and white and dominated by dynamic, devastating copy. 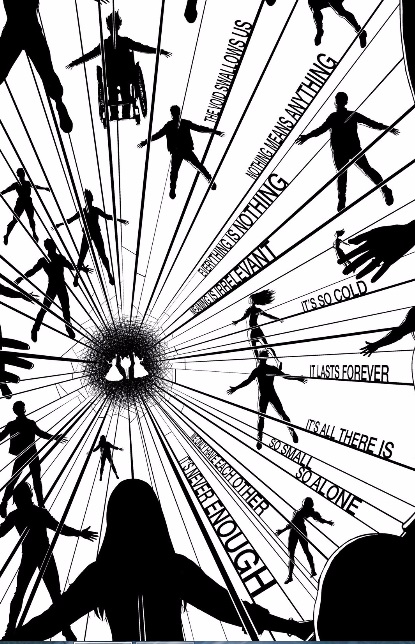 The trio of performers are at the center, small — like a bomb going off and engulfing everyone else with it. The message of this song-bomb is basically what Cassandra’s been trying to communicate for the entire series: don’t let the gods dictate your lives. Now, perhaps ironically, she has the power and the attention of a god in order to get the message of “don’t listen to us” across. With an almost Twilight Zoneian irony, Urdr’s charisma over powers the message itself and instead of turning away from the gods, the fans flip out even harder. I adore this sequence — McKelvie’s acting on Cass is superb. Even behind that mask, her disappointment is clear as a bell. 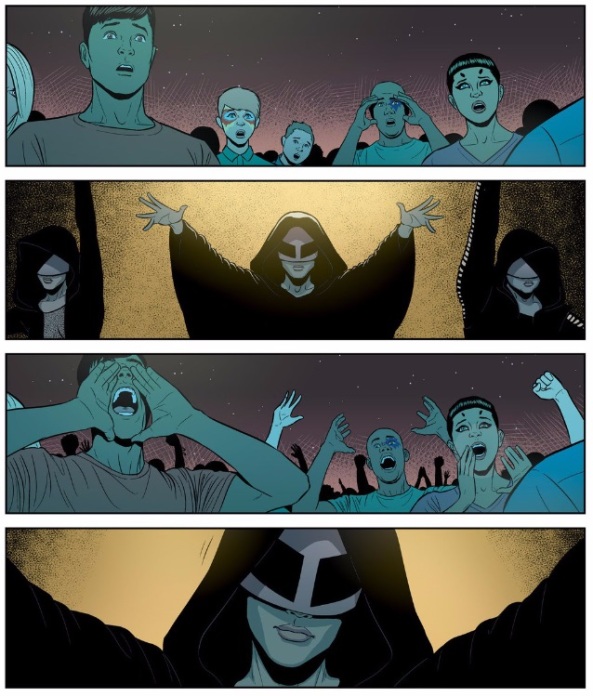 Look how badly she wants to victoriously drop the mic in that second panel. And then her confidence is shattered the second she realizes her powers of persuasion backfire on her.

That’s what everyone is experiencing. The one ray of light that seems to be running through several of these gods’ lives is Laura. She connects with Inanna (that hug is adorable), and even finds a way to comfort the thoroughly defeated Urdr. She may have her own unfulfilled hopes, but she is able to give peace to some of the most powerful, stressed out creatures on the planet. Maybe there’s a kind of divinity in that? Thirteenth god, maybe?

Spencer, I didn’t really touch on the revelations about Dr. Ackford and Tom Wilkes. I’ll admit that part of the mystery is among the least interesting parts of the series for me. There’s so much tricky-to-deduce happening right there on the page, I don’t know why we’d need another level of intrigue. Still — kind of a cool scene as Blake goes over his notes.

Spencer: It’s absolutely a cool scene, Patrick, even if it can be easy to overlook at first. There’s so much gorgeous spectacle in this issue thanks to McKelvie and Matthew Wilson, from the images of Urdr’s performance that you posted to Inanna and Laura’s arrival at Ragnarock to the clash of Baphomet and the Morrigan, that they kind of overpower the more low-key, technical prowess of that scene. 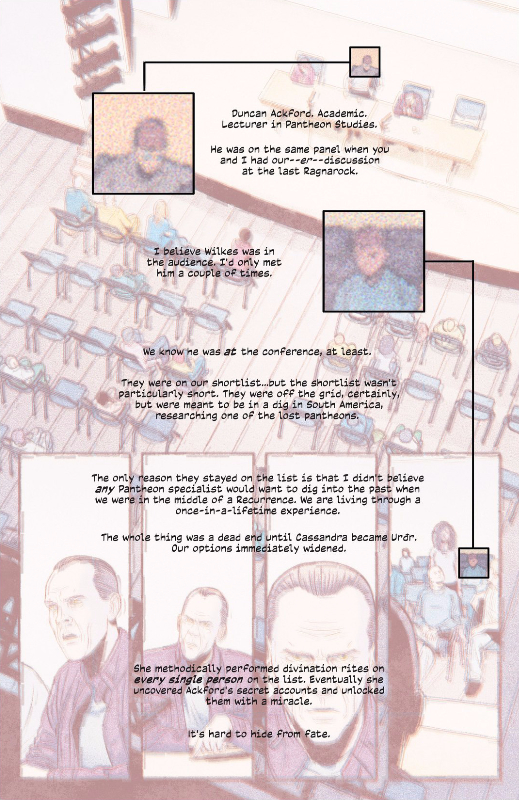 I like that you refer to this as “going over [Blake’s] notes,” Patrick, because McKelvie cleverly stages the scene as if we’re poring through “notes” in the form of previous issues of The Wicked + The Divine. The actual image here, beneath the copy and filters, is a page from issue 6, only now, instead of reading the scene for its content, we’re investigating it (or watching Blake investigate it) for clues. The culprits were right under our noses the whole time, just as they were for Laura — we just didn’t see it!

But you’re right, Patrick, that this little bit of mystery — and especially the reveal of Ackford and Wilkes — isn’t exactly one of the more engaging elements of The Wicked + The Divine. I still don’t think that Lucifer killed the judge — her freak out seemed genuine, and she had nothing to gain from it — but whoever did frame her wasn’t involved with Ackford and Wilkes, they only used their attack as an opportunity to strike. Their trail has officially hit a dead end without providing much in the way of clues, but that’s okay, cause there are far juicier mysteries afoot elsewhere in the issue.

Foremost, at least for me, is figuring out what exactly is going on with Baphomet and the Morrigan. I’ll freely admit that I have trouble following their conversations. It almost seems like Gillen is implying that the Morrigan is somehow responsible for Baphomet’s ascension into the Pantheon — that doesn’t seem to be how the Pantheon works, but I can’t rule it out, either. What’s stranger to me, though, is the way the Morrigan is pushing and playing with Baphomet. As Patrick mentions, it’s possible she’s egging Baphomet on, but then why stop him from following through with the murder? Does she want to be stuck underground with Baphomet, on the run from Ananke for the next two years?

I may have trouble parsing out the Morrigan’s intentions and motives, but what’s clear is that Baphomet is a bit of a puppet in all of this. I mean, sure, he’s not innocent by any means, but it’s surprising how many external forces are pulling his strings. Besides the Morrigan we’ve also got Ananke, and I know this is my pet theory that I’ve probably harped on too much, but I still find it suspicious that she told Baphomet about his ability to pull off a Prometheus Gambit at all. Why do that? And then, as soon as Baphomet strikes, Ananke is there, ready to execute him with far less regret than she showed Lucifer. None of that is exactly damning — you can absolutely read this scene straight and see Ananke as perfectly innocent — but I find it suspicious. If nothing else, she clearly isn’t following her own “don’t use your abilities on humans” rule.

The strongest force acting on Baphomet, though, might just be himself.

I’m starting to get the impression that the “real” Baphomet — who he was before attaining Godhood — was a lot closer to the version of him we saw Dionysus’ rave than the one we’re first introduced to in the underground: a somewhat normal, perhaps even good hearted kid who hides behind sarcasm and anger. It would certainly explain his “trollish” behavior. Maybe he always had these “evil” impulses, but he didn’t have the nerve to act on them until he became Baphomet. But now he has something whispering in his ear, giving him the confidence and motivation to go through with his plans.

Is that just part of being Baphomet? I remember Luci once mentioning how she didn’t want to be the way she was, but didn’t have much of a choice — does being Baphomet, or Lucifer, or Baal, or whatever automatically mean taking on the specific attributes of the god you become, even if it doesn’t necessarily suit your personality? Is that what the devil on Baphomet’s shoulder represents — the personality of Baphomet slowly overwriting his former life?

Of course, in Cassandra/Urdr’s case her old personality is still very much present, but her powers of inspiration are almost too impressive to get her message across to her fans. 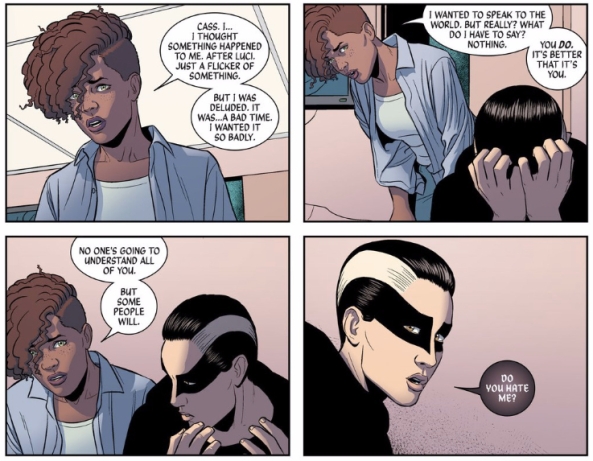 I can’t help but to read this scene as being about writers or creative people in general. One of the most vital aspects of being a successful creator is having something important to say, having a distinct voice and message all your own. There just isn’t room for derivative stories and creators anymore, but there’s even less room for new gods in the Pantheon — 12’s the limit. Laura shows remarkable maturity by coming to accept that Cassandra is more deserving of the position.

Still, things can be tough even when you’ve got an important message to tell and a platform to preach it from. Cassandra’s audience doesn’t understand her message, and that’s got to be painful, but her fans are certainly allowed to disagree with her or form their own interpretations of her performance. I imagine that’s a concept Cassandra would have a hard time grasping even when she was just a reporter, but it’s something she’ll have to learn. I imagine many writers have trouble dealing with people who misinterpret or perhaps even flat-out bash their work, but as Laura says, most people aren’t going to get it. The real success, for Cassandra or any writer out there, is when someone does understand. I’ve got to imagine that’s one of the best feelings in the world.

The Wicked + The Divine has always explored a lot of themes surrounding fame and celebrity, but this is the first time I can remember it so explicitly addressing the joys and frustrations of creation. This is an essential part of being an artist that translates just as effectively to gods (both create life from nothing, just in different ways), and I can’t wait to see Gillen and McKelvie delve into these kind of ideas more, especially since they’re sure to be accompanied by this team’s always stellar, inventive artwork, rich and dense characterization, and compelling plot. If I’ve got any trepidations at all, it’s only because the cover of next month’s issue has me tense. I have a feeling things are going to get ugly fast.