Michael: Comic book narratives have always been about the change of the status quo. Common examples include the balance between good and evil, the latest hero to don a particular mantle, and in the realm of Star Wars, there’s the frequent rotation of Sith Lords. Darth Vader 5 questions the villain’s relevance in the galaxy that his master is trying to maintain a hold on.

Last issue, Darth Vader obtained his army from Geonosis and got some intel from Cylo-IV: the mysterious cyborg the Emperor met with in Darth Vader 1. He travels to Cylo-IV’s base in the Outer Rim to confront the Emperor’s potential replacements for Vader. Vader’s new army quickly gets tossed aside by Cylo’s group of cyborg semi-force users, who also prove to be a challenge for Vader himself. Cylo returns in a new cyborg body, monologuing how the old ways of Darth Vader and the Sith are over and how it’s time for something new. The Emperor then reveals himself and wants to see his new toys beat down his old one. 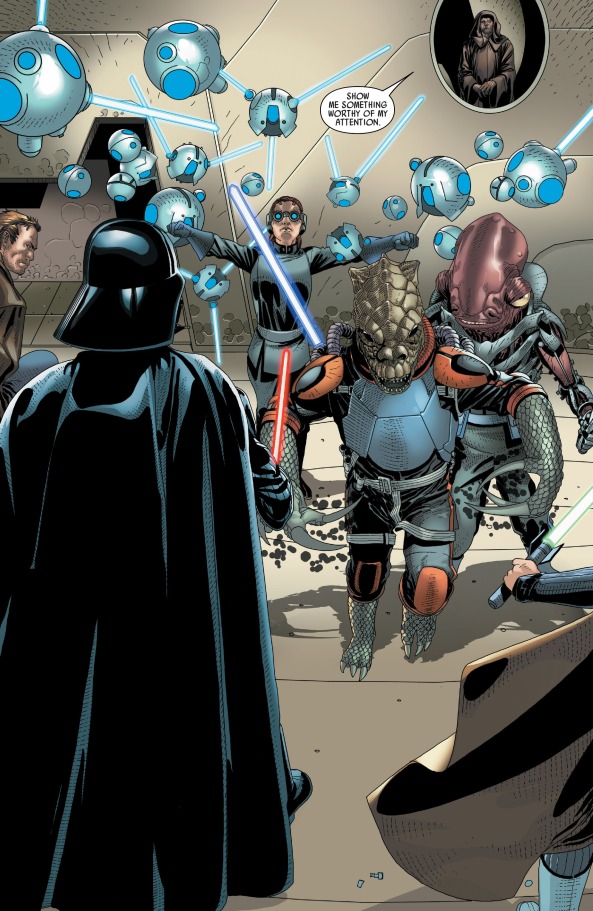 Since this series launched, Vader has been in Emperor Palpatine’s bad graces following the Rebels’ victory over the Empire in A New Hope. Kieron Gillen has been using Darth Vader as an exploration of what happens when the Emperor becomes bored with his favorite pet. The prevailing motivation behind all of Vader’s actions is fear: fear of becoming useless and replaceable to the Emperor. Star Wars scholars shouldn’t be surprised by this idea; Palpatine has always treated his legions as expendable. In the course of the prequel trilogy, Palpatine runs through two Sith apprentices in Darth Maul and Count Dooku and a cyborg Vader prototype in General Grievous. In each case, he wastes no time in moving onto a replacement, the latest being Vader. On a grander scale than that, he staged a war between two completely expendable armies (clone morality debates aside.)

Palps is a dude who is always looking for the next puppets that will help him maintain his spot in the big chair — Cylo and his un-Sith cyborg squad are just the latest example. While Cylo seems to have at least six of these warriors under his command, Aiolin and Morit seem to be the frontrunners; at least the ones highlighted in this issue. Aiolin and Morit are also siblings: the Darth Vader-ification of Luke and Leia, which makes this fusing of flesh and metal all the more blasphemous for Vader.

The best moments of any Darth Vader issue are when a character makes a direct reference to Vader’s days as Anakin Skywalker; intentionally or not. The Emperor makes his entrance into the story by mentioning Vader’s sensitivity on “the topic of children.” Cylo may not have any knowledge of Vader’s identity or past, but it’s a statement intended to cut at Vader’s ego.

Cylo’s plans to replace Vader and the traditions of the Sith are very clear by the end of this issue, but what isn’t as clear is the “why.” Cylo mentions that “the universe is old” and “we are running out of time.” This sort of reminded me of the recent Green Lantern crossover “Lights Out,” where the power of the emotional spectrum was revealed to be depleting. Is the force some non-renewable resource that will dry up eventually?

Whatever universal causes are at play, Cylo clearly wants to embrace a shift in the order of things. Like many sci-fi cyborgs, Cylo wants to utilize the best parts of flesh and technology and leave the obsolete parts behind. An essential tenant of the Sith philosophy has always been the concept of “master and apprentice.” And while this is a relationship built on deception, selfishness and control, it is still a relationship — something inherently human. Perhaps Cylo wants to do away with this practice to remove the potential of sentimentality and attachment, making it easier to replace someone when they have outlived their usefulness.

I think that Gillen is exploring some interesting territory with Vader and his potential replacements. Vader’s disgust at the number of organic/machine hybrids that Cylo has constructed is ironic and almost comical. Vader paved the way for all of this to happen when he started replacing pieces of his body with cybernetics — starting with his hand. In Cylo’s mind, the Empire/Sith/Galaxy is just a larger version of Vader’s body: replacing the outdated, deteriorating pieces with faster and stronger ones. It doesn’t surprise me that Darth Vader is so appalled by Cylo’s “blasphemies,” either. Vader is just like many other power-hungry villains we’ve seen throughout history who consider themselves the only exception to the rule.

Taylor, what did you think of this issue? I noticed a couple of iconic Star Wars moments recreated by Salvador Larocca, anything that tickled your fancy? Also did you think you were witnessing a Star Wars/Avengers crossover with those Chitauri fish (AKA Leviathans)?

Taylor: That idea did cross my mind, actually! Thanks to the Avengers, now whenever I see whales wearing armor (which admittedly isn’t that often) I can’t help but think of that particular movie franchise. While that similarity and crossover appeal definitely creates a cognitive dissonance in my mind, it wasn’t as off-putting as these space whales even existing in the Star Wars universe. Michael, you asked about Larocca recreating recognizable Star Wars moments, and while there are many in this issue, this isn’t one of them. 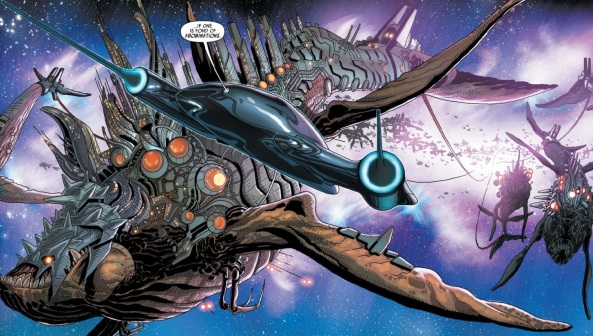 While bionics certainly plays a roll in Star Wars, we’ve never before seen it on such a grand scale. For some reason I can accept the idea of Vader and other humanoids being part machine, but these space whales seem to be taking that conceit just a step too far. I think what does this for me is these creatures don’t resemble anything we’ve seen in this, or any other, Star Wars story before. And while I generally like it when writers deepen the Star Wars universe, this particular instance feels out of place. Part of this is the very idea of these creatures, but Larroca’s depiction of them lacks any discerning element that screams to the reader “THIS IS STAR WARS!” Usually, when new or updated creatures and technology are introduced the artists do a great job of connection the old with the new, but that’s not the case here. It feels more like a page from Guardians of the Galaxy rather than Star Wars.

That’s not to say the entire issues fails when it comes to recreating the iconic design of the Star Wars universe. As you said, Michael, generally Larroca does a great job of acknowledging designs of Star Wars past. There are a lot of subtle ways he achieves this in his art, but I think my favorite is the sartorial choices he makes for Aiolin and Morit.

The Jedi-like robes they’re wearing stand out at first as these are some of the most recognizable symbols from the movies. However, upon closer inspection you see the references don’t end there. The tunics that each of these characters is wearing look surprisingly similar to that worn by Luke in Return of the Jedi. Additionally, they’re wearing a base layer of leather in the exact same style of Vader’s. Together, all of these elements not only remind me of the Star Wars universe, but firmly entrench these characters as belonging to it. It’s something that’s small, but it works wonderfully to create a consistent design aesthetic.

Larroca’s designs aren’t the only thing connecting this title to the franchise cornerstones. The last couple issues of Darth Vader have been somewhat of a revelation to me because of how fun they are. while the action and such is nice, the prime reason for this has to be Triple-Zero, the murderous protocol droid. It’s true, in appearance he looks jut like Threepio (only black) but it’s his personality that gets me. In similar fashion to Threepio, Triple-Zero is snooty and generally kind of a passive-aggressive jerk to just about everyone he interacts with.

The difference between the two protocol droids is that while one will just insult you, the other will murder you. It’s a fun twist on the protocol dorid persona, and I love that, for whatever reason, all protocol droids are just kind of bitchy. Maybe it’s the work they have to do or the way their masters treat them, but they’re always huffy and mean spirited. In that regard, Triple-Zero is just like Threepio, and a wonderful, and hilarious, addition to this comic that creates continuity while also being fresh and new.

Really, the same could be said about this title as a whole. With each month I find I enjoy this series precisely because it adds to the Star Wars universe without changing anything about it that I love. Perhaps that places me in the camp of old-school fans who can’t accept that Star Wars is now much more than just the original trilogy, but so be it. As long as titles like Darth Vader pay their proper respects to what got everything started in the first place, I’ll be happy.