Closing time,
Every new beginning comes from some other beginning’s end.

Taylor: Chances are that if you’ve been in a bar in the past 17 years, you’ve heard these lyrics wafting across a half-filled room. Generally played to indicate that yes, indeed that bar is closing soon, it signals to stragglers of a long night that it’s time to go home. But be not sad, the bittersweet song entreaties its listeners. There is a silver lining to something coming to an end: it signals the beginning of something new, and isn’t that something to be optimistic about? A nice enough thought, but what if the ending of something isn’t all that great and therefore the thought of something beginning again is not cause for celebration, but sadness? A tough question to ask, but Uncanny X-Men 34 has me asking it whether I want to or not.

Dazzler is free thanks to the likes of Magneto. Wanting to take her revenge on the woman who captured her, she appeals to S.H.I.E.L.D. to give her the resources to track down Mystique. She’s successful in her task, posing as Scott Summers to trick her nemesis, making some new friends along the way. Scott’s former pupils help her in her quest, helping Dazzler get her old job back.

Issue 34 of Uncanny X-Men follows in the vein of 33. That is, it’s looking to tie up some loose ends before the series is “concluded” in issue 600. As such, this issue doesn’t act so much as an end to the Uncanny X-Men but rather as a jumping off point for what comes next. Unfortunately, writer Brian Michael Bendis has once again forsaken solid storytelling in an effort to wrap up the series in a nice pretty package.

With all comics we need to suspend our belief to truly enjoy the story. In a realistic series, this might mean we need to believe the characters we are reading about are real and worth caring about. With any X-Men series, we need to believe that people have super powers. Generally this is an easy thing to do, but with any comic there are rules and when they are broken I find it’s hard to re-submerge myself into that world. Take, for example, when Mystique learns that she’s not actually talking to Scott Summer, but merely a mental projection of him. 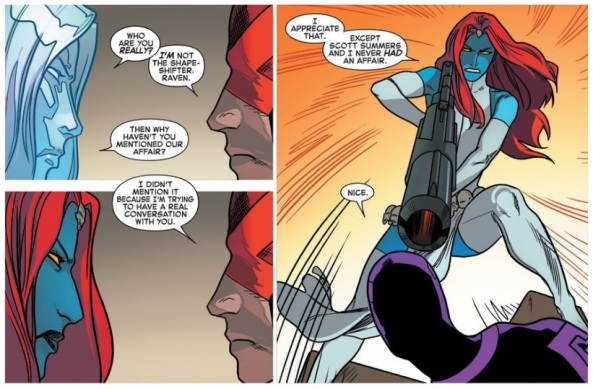 She whips out a gun fast as can be threatens to blow off Dazzler’s face. While I’m fine with this response (this is Mystique we’re talking about, after all), my question is: where did that gun come from? In the panels leading up to those pictured above, we never see Mystique reach for a gun while she and Alison are sitting on the couch. Unless Her tunic has larger pockets than one would think, this gun has simply materialized from nowhere. This is kind of lazy writing and all it would have taken to make it believable would be an establishing shot showing Mystique reaching for a hidden gun. As it is, it takes me out of the moment and makes me wish the scene had come together better.

The frustrating thing about this issue is that while it’s trying so hard to wrap up the story with Dazzler and Mystique, it misses opportunities to be a really fun and neat issue. In the last couple pages, Bendis reveals that all of Scott’s former pupils, who helped capture Mystique, may not be all that thrilled about be X-Men of any sort. 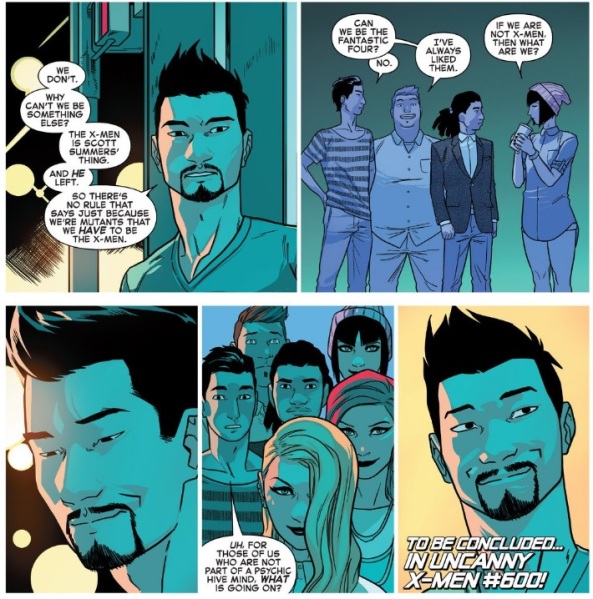 I can’t help but feel that this is what the the issue should have been about. If indeed endings are the beginning of something new (as that issue #600 tag insinuates), I would have been happier to see this issue focus on our young mutants here. That would properly get me excited for what’s about to happen as opposed to feeling a little miffed about guns materializing out of the nether.

Ultimately, for me, there are just too many little things about this issue to make it enjoyable. Sure, some miscues are annoying, but more than that I feel like this issue lacked any definite heart or emotional resonance. The abandoned Xavier School pupils are ripe for this type of narrative and I can’t help but feel like a great opportunity was missed here to explore their story. While this might excite others for a new beginning, it makes me mostly happy it’s coming to an end.

Patrick! I’m not a huge fan of this issue; how do you feel about it? I know you liked issue 33 better than me — is that the case here? There are some fun things in this issue. For instance: I really like Kris Anka’s art and how he depicts Mystique’s transformations. Your thoughts?

Patrick: I think I did like this issue quite a bit more than you did, Taylor. Uncanny always feels like the darker, directionless sibling of All-New, and I loved getting resolution on the outstanding Mystique issue. She’s been out in the world, buying islands, impersonating people, and generally being an asshole for so long that I was ready for her to get some comeuppance. Said comeuppance would have been more emotionally rewarding were they coming from Scott, which is what makes the stated premise of the issue so intriguing. We don’t know that we’re not dealing with Cyclops until Mystique figures it out on her own. I love this idea that Dazzler has to pose as Scott to carry out his mission. It almost makes her an ideological shapeshifter. I really can’t imagine a neater marriage of theme and superpowers.

But there’s also the added bonus of seeing Scott’s new class of mutants in action (and uniform!). For the first time, they’re out to accomplish something of their own volition. Their motivation for helping Dazzler has to be two-fold: on the one hand, they can get their S.H.I.E.L.D. records cleared, but on the other hand, they’re also seeing their teacher’s mission through to the end. Mystique’s like Scott’s white whale, and they’re able to catch her! Mutants spend a lot of time learning to accept themselves and their powers, which is where Triage, Hi-Jack and Goldballs have been stuck for so long. They’re only now starting to realize that they have power to make their world better too. The mutant metaphor blows right past puberty and lines up nicely with growing up, taking responsibility and carving your own identity. I can’t wait to see where the future takes this team.

I’m also totally enamored with the art team of Kris Anka and Marte Gracia. Most of the look of Uncanny X-Men appears to have been driven by Chris Bachalo’s trademarks: portraiture staging, slender and erratic paneling, and graphic high contrast. That makes Bachalo’s work perfectly suited for the non-stop parade of X-struggles this series had become. Anka is a distinct departure from that sensibility, and instead channels some of that lighter, more hopeful visual energy from All-New X-Men artists like Stuart Immonen and Mahmud Asrar. In fact, there are a couple series of panels that recycle drawings (or large portions there-of) to amazing effect. Earlier in the issue, the camera lingers on Dazzler reading through Mystique’s file, cuts to Maria Hill asking if she found anything, and then cuts right back to a static image of Dazzler still frozen looking at the file. In the midst of a chatty issue (and a chatty scene), that beat of silence is effective as hell. Anka pulls out a similar trick just for funsies later.

Which isn’t to say that all of Bachalo’s influence is stomped out of this issue. Gracia carries his commitment to contrast over into the coloring, which establishes a very clear red / blue dynamic from the very first page. Red represents Cyclops and blue represents Mystique, and even if she’s wearing someone else’s skin, the blue makes itself known in the panel. One of my favorite examples of this comes early on, and Raven cycles through her standard bag of tricks to try to freak Scott out. Amazingly, the blue appears on Scott’s body.

First of all, look how bold and dark that coloring is. Mystique and Cyclops (or Dazzler, but Cyclops too) are super serious people tackling super serious problems. By the end of the issue, as the new class has exerted their own will on the situation, the colors have faded to candy-versions of themselves. Check out the crowd at Dazzler’s show.

That’s all a function of how excited I am to see the new generation step up and take control of their lives, carving out their own group, their own identities, their own priorities. Taylor might be right in that this issue might be more effective at promises that in the future than actually delivering on in within the issue itself. Still, I can’t help but be excited to see the team in costume and looking amazing. 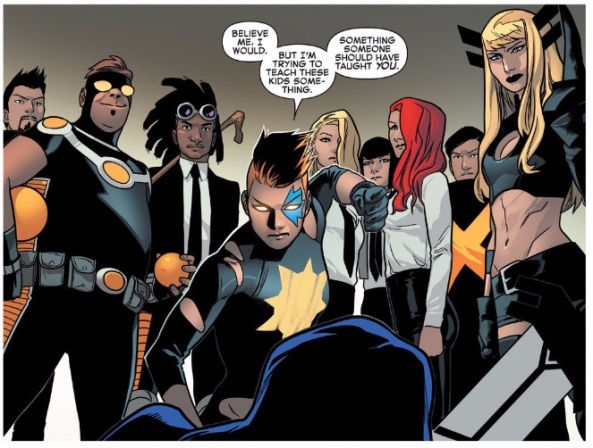 In fact, Gracia might be using colors again to signal that these characters have graduated from that long Mystique-Cyclops drama. The dominant color in this panel is yellow — which is naturally the only thing left when you’re purged yourself of cyan (blue) and magenta (red).