Michael: My biggest gripe with super hero movies or comic book reboots is that their world isn’t fully-formed; typically we have to wait an hour into the movie before the hero does the hero-ing we came to see. Origins, exposition and plot machinations take up an overwhelming amount of time and space in these situations. “Darkseid War” might be my favorite Justice League story yet because it doesn’t take that commonplace route. While Justice League 41 does have a lot of exposition, we are entering into the fully-formed world of the New Gods of Apokolips. This isn’t the origin story of Mister Miracle; he’s BEEN Mister Miracle for a while now.

Darkseid has sent his soldiers Lashina and Kanto to Earth to find and kill anyone by the name of Myrina Black, Terminator style. The Justice League follows a Boom Tube signature and investigates one of these particular crime scenes and end up fighting Darkseid’s daughter Grail. On Apokolips we are (re)introduced to Scott Free AKA Mister Miracle, the only person to ever escape Darkseid’s grip. After a brief interaction with Darkseid, Scott flees to Earth, similarly escapes Kanto and Lashina and finds himself face-to-face with the infamous and mysterious Myrina Black.

I’ve always liked the portrayal of Mister Miracle as the ultimate escape artist who escapes from hell itself. Scott Free could’ve been snuffed out by the Apokolips slave pits but instead picks himself up and makes something of himself. Here Geoff Johns depicts Mister Miracle as a symbol of freedom and overcoming adversity. Practice makes perfect when it comes to Scott’s escape artistry. Johns has Scott slowly venturing further and further out of his cell, learning his boundaries and gradually pushing through them. He’s Andy Dufresne in The Shawshank Redemption, Clint Eastwood in Escape from Alcatraz and one of those dogs Martin Seligman shocked in his experiments, but is actually overcoming its learned helplessness.

Johns writes a Mister Miracle/Darkseid interaction that is a brief and bitter reunion between stepfather and stepson. Jason Fabok frames their stare-down so Darkseid’s immensity is overtaking the panel/page making Mister Miracle’s panel smaller and the camera is zoomed out.  I like how Brad Anderson mostly covered Darkseid in shadow — it’s not his time to be revealed in his full glory; that comes later. I am very pleased with this Mister Miracle that Johns and Fabok have presented for us. Like he did with Shazam, Johns has given us a New 52 Mister Miracle that honors the original incarnation. (Given the status of Batman, Superman and Green Lantern, Justice League is probably still New 52/pre-Convergence for the time being.) You can’t have Mister Miracle and NOT have him decked out in reds, yellows and greens.

The majority of the narration/exposition in Justice League 41 belongs to Mister Miracle, but the actual Leaguer perspective in this issue is Wonder Woman’s. Johns and Fabok do a nice job grounding an issue about demigods trying to make sense of a war between two actual gods by humanizing the League. 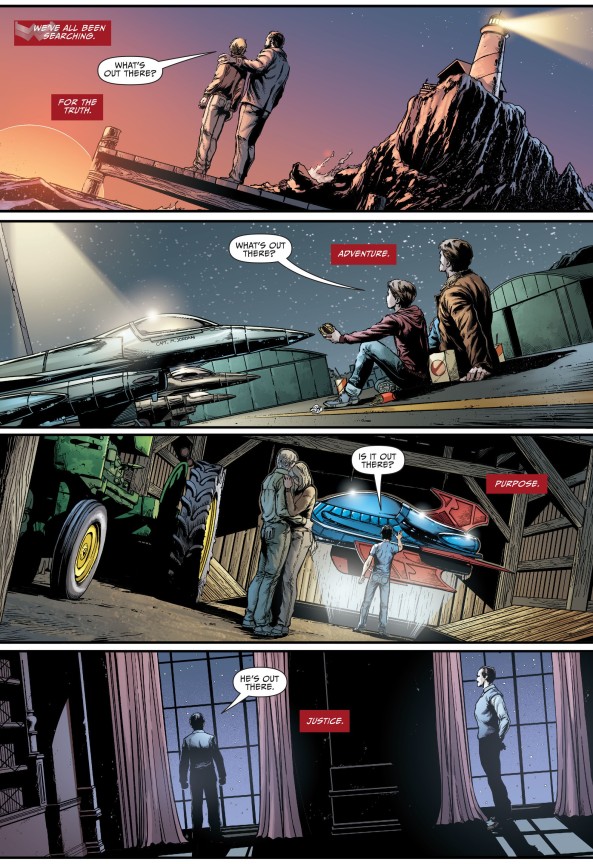 It’s a touching page of a couple of the Leaguers in their youth being all existential with their parental figures. (Side note: Ma Kent looks SUPER sad that Clark is asking about his rocket and Krypton.) There’s a lot to juggle in this book, but most of the Leaguers all get a nice little character moment; ex: the young Shazam has never seen a dead body. It’s nice to see Hal Jordan back on the team — even nicer not seeing him being portrayed as a huge douche.

I’d like to briefly focus in on the imagery of that opening scene. The issue opens with a splash of blood red wine crashing against the side of the glass like waves in the storm. The image evokes an omen of the chaos that lies ahead and the blood that will be spilled in the struggle between Darkseid and the Anti-Monitor.

As a little Easter egg for those of us who go out of their way to find such Easter eggs, Kanto is reading The Book of Courtier. The Book of Courtier is a Renaissance book about courtesy and manners. In his original incarnation (and implied here) Kanto was once exiled to live in the Renaissance by Darkseid. The book breeds gentlemen who are warriors, athletes and academics who discuss nature, humor, women and love. With his dagger Mother Box (which is cool as hell btw), Kanto is a warrior hunter on a quest for a woman…though it’s not in the name of love. The wine that Kanto drinks is a vintage only produced in “exceptional years,” thus very rare. You’ve gotta admire the bad guys who like the finer things in life, just like Lex Luthor.

Speaking of, one thing that Johns always manages to nail is the Superman/Lex Luthor relationship. Their dynamic can essentially be boiled down to a pissing contest; with each of them trying to prove himself as the smartest, best hero for whoever is within earshot. Ideally Superman is the most honest and genuine person in the room, but it is delightful to see how Luthor gets under his skin in a way no one else can, making him a Super Dick. Of course Superman will try to protect Luthor if his life is in danger. Lex’s sister Lena put the hit on him eh? Seems pretty obvious in hindsight; though why she is doing it “for Darkseid” still eludes me.

Ok I have a lot of thoughts and theories on the stuff presented in Justice League 41, but I’ll save some of that for Mark to cover. Some quick thoughts: Grail wears an upside down version of Darkseid’s Omega symbol; this is the Siemens symbol S used for electrical conductance. Myrina Black has an Omega symbol under her eye that evokes the mutant “M” brand from X-Men. She rides a one-eyed Griffin named Griff that makes me think of Odin. Ok, I’m done. I promise. Mark how did you feel about the book? Any thoughts or theories on Grail and the mysterious Myrina Black? Do you get the sense that everyone forgets that Superman and Wonder Woman are dating…including Superman and Wonder Woman?

Mark: Yeah I definitely thought Superman’s complete non-reaction to Captain Cold’s interest in Wonder Woman was weird. Maybe coming out of Convergence DC is willing to forget some of the lamer aspects of the New 52*? I’d be fine if we just quietly forget “Superman and Wonder Woman: Power Couple” was ever a thing. But man, overall what a great reintroduction to the Justice League.

(*Just as a quick side note, it’s going to take me a little bit to get used to this new, continuity-free DC. Seeing Superman and Green Lantern in their pre-Convergence state here, and then reading Action Comics and Green Lantern and having them be totally different was a bit jarring.)

Justice League 41 is a dense issue, and Johns covers a lot of ground, pulling together threads that have been dangling since at least Forever Evil concluded last year. But of everything going on, my favorite aspect is the work Johns does with Mister Miracle. Scott Free is an unusual character, but he’s written so well here. One thing about Johns’ writing is his ability to take a minor or oft-neglected character and give them depth beyond their usual caricature. In Justice League he’s done this recently with Captain Cold, and I’m excited to see the same thing happen here with Mister Miracle. The art contributes as well, with Fabok drawing him to look, frankly, awesome. 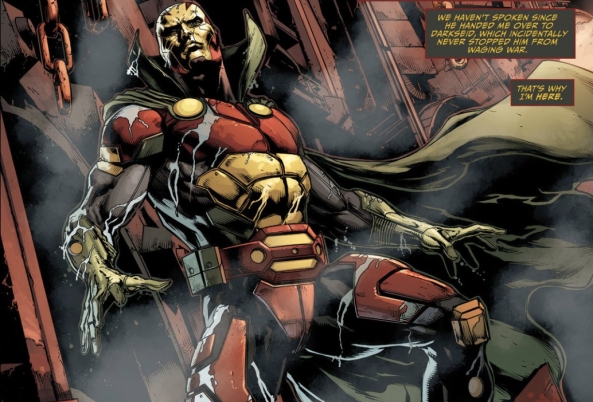 And maybe because Avengers: Age of Ultron came out recently, but this is the first time I’ve noticed a strong similarity between his design and the Vision. Just me?

The rest of the Justice League is acquitted equally well. This isn’t a relaunch of the title per se, but it does feel like it was written as an easy entry point for new readers. Well, an easy-ish entry point for new readers, anyway. If you haven’t been keeping up with Justice League — or DC in general over the past two years — you’d probably be completely flummoxed as to why Ultraman is in prison or what the deal is with the Amazo virus that Superman and Lux Luthor keep going on about.

But those initial pages where we see the Justice League (minus Superman) gathered to investigate the crime scene are such a textbook examples of economy in storytelling. Within three pages the role of each member, plus the inter-personal dynamics amongst the team, are laid out so clearly. I found myself truly thinking, “Damn, this is well written” as I went through the issue. Even the way the story is paced, with Mister Miracle’s plot breaking the Justice League’s story into three, is meticulous.

Between the art and the writing, Justice League 41 feels like an important issue. Is it because it’s coming off of Convergence that DC feels the need to soft relaunch titles? Or is it just basically a statement of purpose by Johns and Fabok? The previous few Justice League arcs have definitely not felt this way, so I’m eager to find out if the series continues to have this quality moving forward.

I do feel like I’m letting you down, Michael, as I’m so bad at prognosticating that I won’t even bother with theories of my own, but I’d love to hear what you think all of the symbols and Omegas add up to.