Spencer: Asking for help isn’t easy. It should be, because we all need help from time to time (or, perhaps more accurately, almost constantly), yet there’s often a stigma against asking for help. Needing helps means admitting that you can’t do everything all by yourself; oftentimes it means admitting that you were wrong, or that you failed. In the case of Cindy Moon — a.k.a. Silk — it also means revealing some of her deepest secrets. Yup, asking for help can be downright difficult, but it’s also absolutely essential if we want to keep moving forward in life. Robbie Thompson and Stacey Lee’s Silk 5 finds Cindy finally reaching out for help in both her superheroic and civilian personas, and in both cases it’s without a doubt the best possible decision.

Where Cindy needs the most help, of course, is with the case of her missing family. She’s hit a dead end looking for leads, and although she vows to keep trying, she’s clearly frustrated. When her boss, J. Jonah Jameson, stumbles upon her search, Cindy tries to hide it from him out of fear, but quickly ends up telling him almost everything. 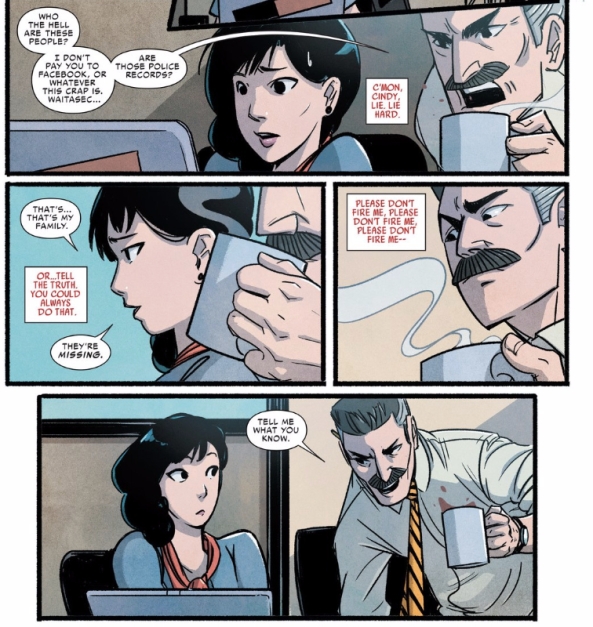 It’s as if her mouth revolts against her mind — it knows how badly she needs help! Thankfully, despite his caustic persona, Jameson is touched; he plans to pass along the information about her family to some of his buddies in the NYPD, and passes along a piece of advice Cindy desperately needs:

We quickly see Silk put that advice into action as she attempts to rescue the daughter of Harris Porter — the “Pokemon dude” she fought in issue three — from Black Cat. Cindy doesn’t go in alone, or even just with Porter — despite all their differences, she calls Spider-Man for back-up because she knows she needs his help. Once again, it pays off. Peter and Cindy are miraculously able to work together without biting each others’ heads off or blowing the mission off to make out, and that’s a serious milestone for these two. Thompson doesn’t draw any attention to their improved teamwork or Cindy’s following Jameson’s advice, but just because these developments are subtle doesn’t mean they aren’t momentous.

I’m also fond of the way Thompson has Peter acknowledge his own hand in Black Cat’s current rampage — and, thus, in her targeting Silk. Peter owes Cindy his help in the same way Cindy owes Porter (since Black Cat only targeted his daughter to get to Silk), and if you expect people to help you when you ask, then you also need to help others when they ask. It’s an important and powerful cycle of people helping people, and it’s a fantastic example for Cindy and Peter to set.

Of course, the idea of asking for (and giving) help is just one of the many plates Thompson is spinning throughout Silk 5. At times the issue can feel a bit scattered, as if it’s mainly focused on setting things up for the next installment — the stuff with Cindy’s family bookends the issue, with the Black Cat confrontation filling the middle, but neither plot is resolved. Still, this issue is largely a successful one; Thompson’s clear characterization and charming dialogue (especially between Cindy and Porter’s daughter) makes the issue a joy to read no matter what plot it’s addressing.

Stacey Lee’s art, accompanied by Ian Herring’s colors, are also an essential component of this issue’s success. Lee’s character designs are so adorable I can barely stand it — the appearance of Porter’s daughter, Marie, and Cindy’s little brother, Albert, practically melt my heart, but they’re also a fantastic contrast to the heavy stuff going on in both those scenes (be it Marie’s abduction or Albert’s fear of Cindy).

Lee and Thompson also demonstrate an excellent sense of pacing. Those first two pages are practically a masterclass on building tension, going from Marie’s peaceful playtime to her strangely quiet and disheveled house to her finally coming face-to-face with Black Cat — who we never see, mind you, but we never need to, because the subtle hints that have been building throughout the scene and Marie’s “Are you a kitty cat?” tells us everything we need to understand what happened. The confrontation between Silk and Porter is just as artfully framed — there’s this killer between-the-legs shot of Porter staring down Cindy that’s just aces, and it leads right into this gorgeous face-off between the two. 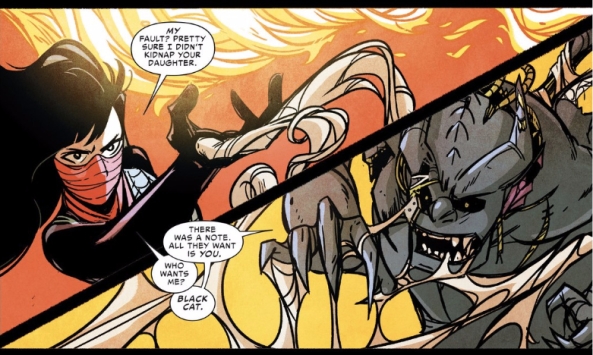 Herring’s contrast of red and yellow here hits just the right note, but I also love the storytelling going on here. These panels are set up like a face-off, such as would typically precede a battle, but Cindy’s so good that by the time we reach the second panel, she’s already “beaten” Porter before the fight’s really even begun!

As “cute” as Lee’s art is, though, she can also rock an action scene like nobody’s business. There’s a shot of a thug punching Porter so fast that his hand becomes a blur that I absolutely adore, but Lee’s best action sequence comes on the next page. 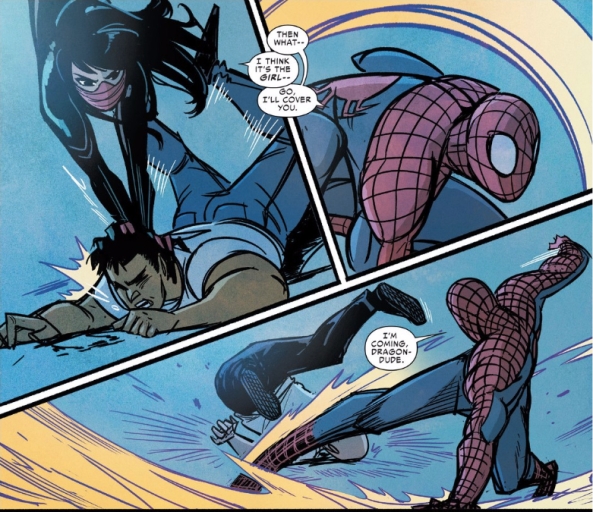 Just look at Peter’s kick in the third panel — the motion lines show that Peter span in a full circle before kicking the thug, which is not only incredibly cool, but also just some seriously effective storytelling. The ability to create that kind of motion in just one panel is impressive no matter how you cut it.

Drew, this isn’t necessarily Silk‘s most focused issue, but I still found quite a bit here to love — how about you? What did you think of that insane cliffhanger, or all the hidden Pokemon easter eggs, or Cindy’s cool silk-covered hand, or just her and Black Cat’s confrontation in general? I may not have been able to tie all these plot-threads together in a pretty little bow, but there’s still plenty for you to unpack.

Drew: Totally. I’m not sure I have a better sense of how these are thematically connected, but I’ll be damned if this wasn’t a great issue. You’ve hit a lot of the bigger highlights already, so I’m going to dig into some of those smaller details.

The first that jumped out to me is Cindy’s panicked “minimize window, minimize window” when her boss walks by. I think most of us can relate to doing personal computer stuff on company time, and not wanting our bosses to know — how else would we get so many comments on our articles? Thankfully, most of us are just goofing off, not searching for our long lost families, but it still made for a nice little moment where I could relate with Cindy 100%.

The scene that follows is also pretty spectacular. Jameson’s willingness to help is such an unexpected twist, but it makes sense for a character who values family himself. Thompson subtly reinforces those values by having Jameson use Cindy’s name when he’s helping her — it’s only twice, and the first time he has to stop himself from calling her Analog, but it’s bookended by more recognizably Jameson moments, where he’s barking orders at everyone, including Analog.

Spencer, you’re absolutely right about Lee’s work in those action sequences, so I’ll focus on some quieter moments. I’m particularly impressed with the page of talking heads in the lead up to the warehouse battle.

That visual gag is aces, and only works because of the static shot, but I think what really impresses me about this sequence is how expressive both Spider-Man and Silk are throughout the scene. Spidey’s face is totally covered, and Silk only has her eyes exposed, but Lee manages to convey a range of emotions through posture and glances. It’s subtle work, but it manages to make that static shot interesting even without that action in the background.

Once that action kicks in, I’m kind of enamored of how Lee gets just a little bit looser with her linework. Look again at that warehouse fight sequence Spencer posted, and you’ll see that Spidey in particular looks more like a preliminary sketch than a finished figure. Far from feeling unfinished, that looseness adds energy to the scene, making it feel as fast as it looks. Lee contrasts this brilliantly when Silk finds Marie, a sequence that is so beautifully composed, it feels almost out-of-time. 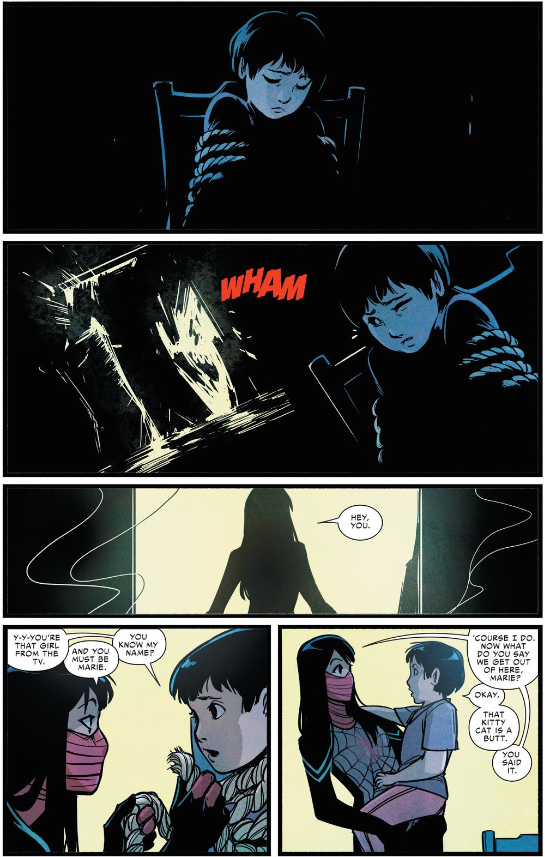 Everything is working together here — the central compositions as we establish both Marie and Silk, the use of yellow to obliterate the dreary blues of those first two panels, the expressive faces. That’s some grade-A storytelling right there.

Honestly, I’m so pleased with this issue, I even see the unresolved nature of it’s two main conflicts as a positive. Both the beef with Black Cat and the mystery around Cindy’s family are long-gestating runners for this series, so I’m happy enough with the rescue of Marie as a resolution to this issue. Of course, it seems like we may now be poised to blow open the case of Cindy’s family. Of all the places I expected that mystery to lead Cindy, some kind of well-connected criminal mastermind wasn’t one of them. Lee once again nails that sequence — and I love Herring’s choice to totally wash-out Cindy under those examination lights — but I’m more impressed at just how effective of a twist it is: Wait, who is this guy? Wait, how does he know Cindy is Silk? Wait, HE KNOWS WHERE HER FAMILY IS?!

Man, even in a more move-the-pieces-in-place issue, I’m absolutely loving this series. The creative team has found a fantastic tone for this series, and they seem capable of just about anything they can imagine. I can’t wait to see where this thing goes next.