Turning and turning in the widening gyre
The falcon cannot hear the falconer;
Things fall apart; the centre cannot hold;
Mere anarchy is loosed upon the world,
The blood-dimmed tide is loosed, and everywhere
The ceremony of innocence is drowned;
The best lack all conviction, while the worst
Are full of passionate intensity.

Drew: Written in the wake of the first World War, “The Second Coming” features some of the most vivid images in modernist poetry. The second stanza takes on a more biblical tone, name-dropping the titular second coming, but the first stanza, quoted above, features no hint of the divine — this is pure horror of war stuff. Of all the concepts Yeats evokes, the notion that “the best lack all conviction” might actually be the scariest to me. If war can change our values and convictions, what are we actually fighting for? Curiously, we talk about becoming a parent in similar ways: our values and priorities shift around when we have a child to care for. Saga has always existed at the weird intersection between war and parenthood, but issue 29 makes its exploration of the values we sacrifice in the name of either a bit more explicit.

It’s a jarring issue, as those shifting values exact sacrifices from all of our groups, but the most profound value shift might be seen in the Last Revolutionaries. Their plan to trade Hazel in a prisoner exchange of sorts with Wreath High Command takes a turn for the worse when Secretary General Vez realizes Dengo is amongst the Last Revolution’s ranks. Vez lays out their options: kill Dengo or kiss their deal goodbye. Shockingly, the Last Revolutionaries opt for the former.

Heretofore presented as total idealists, I never expected the Last Revolutionaries to sacrifice those ideals so readily. It’s telling that their leader resorts to the sorry euphemism that “Dengo’s services will no longer be needed” — this goes against everything he stands for, but he’s agreeing so he can…what? Carry on the fight another day? It’s one of those moments where it seems like they’ve already lost sight of the thing they were fighting for in the first place.

Of course, that sudden loss of ideals AND the fact that they’re about to kill him makes Dengo an instant enemy. Klara moves to rescue him, but he’s quick to fire back, protecting both Hazel and the princeling in the process. He sends Klara and Hazel off to the treehouse, but I’m confident we’ll see him again, perhaps now disabused of his political ideals. Few things can turn you off to politics faster than having your life used as a bargaining chip.

The other sacrifices in this issue don’t so much hinge on idealogical shifts (though Prince Robot is sure to remind us of Marko’s sudden hawkishness), but they’re no less shocking: the apparent deaths of The Brand, Prince Robot IV, and Gwendolyn. I’ve ranked those in order of my confidence in those deaths — the Brand is just a pair of legs by the issue end, but I could see Prince Robot or Gwendolyn getting up from their injuries. Either way, at least one key player is out of the picture, and basically all of these sacrifices came in the name of protecting (or rescuing) a child. Come to think of it, I suppose you could say self-preservation is the value being eschewed here, offering a more optimistic reflection of the Last Revolution’s loss of direction.

And maybe that’s the point? The Last Revolution’s idealism lead them to a place where they had to sacrifice their ideals, in a kind of hypocritical paradox, but everyone else sacrifices their ideals in the name of protecting their children. It may be against their old ideals, but there’s no actual paradox — their priorities simply shifted. I hesitate to suggest that parenthood is the solution to war, but it’s interesting to think that they might be two sides of the same coin.

Geez, Spencer, I spent so much time philosophizing that I totally neglected to mention that giant salamander wang. Or Alana’s reaction to getting recast. Or to hypothesize on what happens to that Embargon curse the Brand put on Upsher and Doff. Feel free to touch on any of those if you like, but I suppose I can’t blame you if you want to stick to the broader strokes, too.

Spencer: “Giant Salamander Wang” is going in the ol’ “new band name” file, Drew, that’s for sure. As for the Last Revolution, I don’t know if they’ve betrayed their principles as much as they’ve simply revealed what their principles were all along. It seems significant that the Revolution is looking to exchange Hazel for their captured comrades instead of looking for some way to use her to strike a blow to any of the warring parties they so hate — the Revolution’s first priority is protecting their own, and by “their own,” I mean members of the Revolution and no one else. 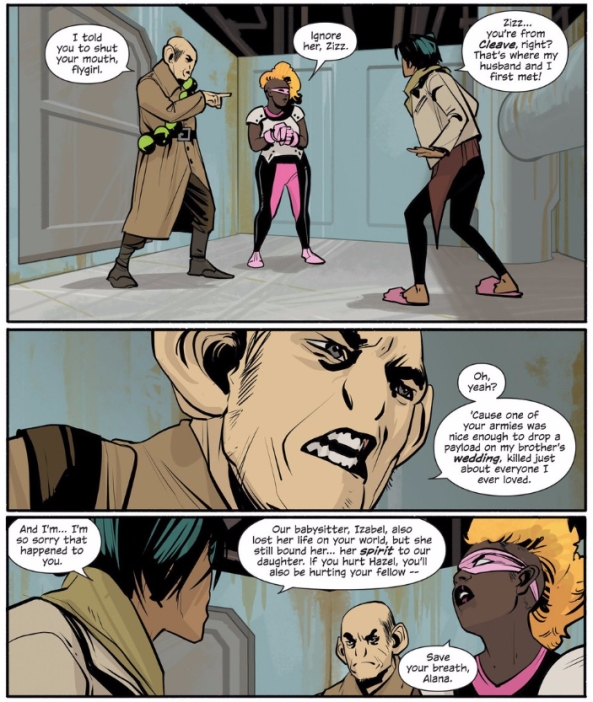 Now these officers certainly have just reason to be wary of Alana, and to hate the various armies that have put them through so much. But Alana and her family are no longer any part of those armies, and Hazel is living proof — in fact, the very reason everybody in the galaxy wants Hazel so badly is because she’s a living example that peace between Wreath and Landfall is possible. If these nations’ fear isn’t enough proof of Hazel’s symbolic power, there’s also Izabel, who, like Zizz here, has every right to hate Alana and Marko, but instead becomes one of their closest allies.

I guess what I’m saying is that, even if the Revolution is determined to use Hazel as a bargaining chip, it should be obvious to these officers that Alana is nothing like the armies of Wreath and Landfall. Prejudice is a huge part of the Saga universe, and the fact that the Last Revolution, supposed freedom-fighters, are caught up in the same prejudices and “us or them” rhetoric as the forces they’re supposed to oppose is a sure sign that they long ago lost their way.

This also makes me think of a statement that Hazel, as our narrator, makes later in the issue.

Heroic sacrifices are such a prominent part of this issue that it’d be easy to forget that there are other kind of sacrifices as well. The Revolution wants to sacrifice Hazel for their own ends, but that sacrifice is setting a tone that will only beget more of the same kind — the Revolution is only perpetuating the culture of war, death, and violence they’re supposed to be crusading against.

Hazel’s narration also makes me think of the effect all of Saga 29‘s heroic sacrifices may have on the survivors. The first sacrifice here (which I’d probably count as Yuma’s in last month’s issue) has seemingly set off an exponential domino effect, with anywhere from one to three more deaths following in its wake. That’s a lot of death to deal with, and nobody’s going to bear the brunt of that more than poor little Sophie.

Sophie’s trip into the dragon’s den isn’t the result of childish impulsiveness — at least, not entirely — but is borne from Sophie’s guilt over her perceived role in the Will’s current condition. Now, though, the Brand — Sophie’s namesake and the Will’s sister — is dead (and possibly Gwendolyn as well, though I doubt it) due to her trying to rescue Sophie from the dragon. I can only imagine how guilty Sophie is going to feel now. The Brand certainly wouldn’t have wanted that to be her last gift to Sophie, yet what choice did she have? Sophie may end up even further ensnared in an endless cycle of guilt, but at least she’s still alive, and sometimes that’s the only victory one can hope for.

This has me thinking about family, and specifically about raising children. There’s no way to raise a perfectly adjusted child — everybody has some sort of trauma, and everybody gets caught up in at least one or two of the same struggles that humanity has been endlessly dealing with since their inception. Sometimes all a parent can do is keep their kid alive and hope to do as little harm as they can in the process. That’s certainly the only kind of victory Marko and Alana, or even The Brand and Gwendolyn, can hope for right now. It’s tough, but that’s life, especially in the world of Saga.

As rough and harsh and explicit as this world often is, though, I still enjoy every moment I get to spend reading about it. At this point it goes without saying, but Saga 29 is up to the same high standard that Brian K. Vaughan and Fiona Staples originally set for themselves, and then have continued to meet ever since. I love that moment Drew mentioned where Alana gets distracted from trying to save her daughter’s life because she realizes her role was recast. Likewise, I love Prince Robot’s little eulogy to Yuma, not only because its sweet, but because it comes after an entire issue of Prince Robot at his most stuck-up, abrasive, and obscene. These characters are flawed and multi-dimensional, and thus, incredibly realistic, and that’s what gives Saga so much of its power — and also what makes the possibility of any of them dying so heartbreaking. Nobody is ever safe in Saga, and even if the sheer amount of death fake-outs is starting to get become a bit too much for me (I’m about 90% sure Prince Robot and Gwendolyn survived), even the possibility of these characters dying is terrifying to think about. That’s a testament to the work Vaughan and Staples have done bringing this world and these characters to life, and it’s why, without a doubt, I’ll be back next month to see who really made it through when the smoke clears.