Today, Spencer and Michael are discussing Mrs. Deadpool and the Howling Commandos 2, originally released July 8th, 2015. This issue is a Secret Wars tie-in. For more Secret Wars coverage from the week, click here.

Spencer: One of my best friends and I quite often find ourselves arguing about how “realistic” a story should be. He loves stories that could take place in our “real” world, while they sometimes rub me the wrong way. Don’t get me wrong, there’s quite a few stories that benefit from a sense of gritty realism (The Black Hood is an excellent, recent example), but I resent the idea that all stories need to be realistic. Our world is quite often an awful place, and fiction is my way of escaping it — I get a lot of joy out of stories that can break the restrictive rules of our reality. Gerry Duggan and Salva Espin’s Mrs. Deadpool and the Howling Commandos 2 is just such a story, one which takes great pleasure in transcending the limits of both reality and traditional narrative structures. It’s a hoot.

Even the very concept of Mrs. Deadpool and the Howling Commandos is several layers separated from our reality. Set in one of the realms of God Doom’s Battleworld (see Secret Wars), the story then moves underground to Shiklah’s Monster Metropolis, a realm currently under the control of Dracula. After Deadpool’s attempted coup ends in his death, Shiklah’s only hope of overthrowing Dracula comes from reassembling an ancient weapon of unfathomable power. Shiklah leaves on a quest to find it under the pretense of spreading her brothers’ ashes, but Dracula assigns his Howling Commandos (a motley crew of movie-monsters including Werewolf-By-Night, The Living Mummy, Frankenstein’s Monster, Man-Thing, and Marcus the Centaur) to kill her. Shiklah’s savvy enough to figure this out for herself and attempts to ditch the Commandos once they make it across the River Styx, but is surprised to discover that the Commandos also are looking to kill Dracula! Meanwhile, Dracula’s under investigation by Doom’s Thor Corps themselves!

The story is also narrated by the ghost of Deadpool, wrapping it in yet another layer of wacky unreality. Deadpool can remember both the pre-Secret Wars reality and his death on Battleworld, frequently interrupts the story with his commentary, and eventually leaps into the story himself — it would be way too strange and bizarre for any character other than Deadpool, but Wade’s long history of understanding that he’s a comic book character completely sells this otherwise preposterous framing device. Espin and colorist Val Staples provide bright, expressive, fun artwork throughout the entire issue, but for my money Espin’s best work is during these Deadpool sequences — despite Wade’s mask, he manages to convey Wade’s joy and enthusiasm perfectly.

After all the world-building Duggan had to establish in issue 1, issue 2 slows the story down quite a bit, mainly focusing on Shiklah and the Howling Commandos’ battle against the undead hoards of the River Styx. The change of pace allows for Shiklah to bounce off the other Commandos a bit, but mostly allows for Duggan to milk these characters for every joke he can. Not every joke lands (Frankenstein’s constant accusations that the Invisible Man watches him naked get tired quick), but more than enough do to make it all worthwhile. I’m especially enamored with Marcus, the Centaur with a symbiote and diabetes — the mundane detail of Marcus’ diabetes contrasted against the more fantastical elements of his being a Centaur with a symbiote is comedic gold, especially whenever Marcus goes out of his way to mention his diabetes, but I also love that this isn’t all there is to Marcus. Throughout this issue Duggan also establishes that Marcus is just the Commandos’ resident weirdo — he constantly makes bad jokes, bizarre comments, and strange asides to the point that he even annoys the other Commandos.

This fight scene also shows off the kind of “grab-bag” influences Duggan’s thrown into this world. Both Shiklah’s Monster Metropolis and the afterlife she leads the Commandos to reference numerous different films, comics, legends, and mythologies, and then proceeds to systematically disregard or outright break the rules of those realities. That could be frustrating if we were meant to take any of this seriously, but the humorous, ridiculously exaggerated tone Duggan and Espin strike makes it clear that the only rule this story follows is the rule of funny. As long as the reader is laughing, and as long as they care about Shiklah’s success, then they’ll be able to overlook any of Duggan and Espin’s more bizarre flights of fancy.

That’s something I, as a reader, am able to do, and thus I consider this issue a success. That said, there is one element of Mrs. Deadpool 2 that confuses me a bit: why is everyone so scared of Dracula? I understand that he’s powerful, but so is Shiklah and all the Howling Commandos. Why does Dracula hold such a sway over them? Is it some great power of his we’ve yet to see, or is it simply because of any armies he may command? With the Thors on his case I’m sure we’ll see why Dracula is so feared sooner rather than later, but at the moment he hasn’t shown himself to be worthy of the status Duggan gives him.

Regardless, I still found this to be an appealingly zany adventure. I had a ton of fun reading it, and when it comes to Mrs. Deadpool and the Howling Commandos, I think that may be what matters the most. What about you, Michael? Did you enjoy this escape from reality, or were you looking for something a little more grounded?

Michael: I think that if anyone reading a book with “Deadpool” in the title expects anything grounded, they most definitely need to check themselves because one of the best parts of any Deadpool adventure is just how absurd it is. In all honesty I had stopped reading Deadpool around the time that he married Lady Shiklah, but I’m happy to say that the same sharp wit that Gerry Duggan has always provided is still there. From the get-go we realize that this book is all about the jokes, simply with the play on the “howling” bit of the Howling Commandos in the title. Deadpool is always walking on the wacky side, but it’s great to see Duggan carrying on the comedic vibe after Deadpool’s demise. Whenever I read Duggan’s work on Deadpool I think to myself that more comedians need to be writing comic books; it just works on so many levels.

Spencer already mentioned this but let me reiterate the sheer awesomeness that is Marcus: the Centaur with a symbiote and diabetes. Marcus is such a ridiculous character, but any comic book fan worth his salt will know that comics are jam-packed with ridiculous characters. Marcus is symbolic of Duggan’s understanding of the bizarre turns in comic book history. He’s a centaur? Sure why not? With a symbiote AND a diabetic condition? Absolutely. To Spencer’s point, Marcus is actually the “grounding” of this issue. While our Commandos are debating the rules of traversing the River Styx and fighting zombies, Marcus brings the focus back to a very real-world concern in a laughable way. Marcus is sort of the “anti-straight man” straight man. Instead of being the “unfunny straight man,” in a way Marcus’ diabetes makes him the “non-mythical straight man”; at least in a certain context. At times Marcus feels like he’s standing in for Deadpool with his comedic relief and commentary. Not only does he go on his diabetic tangents but he also tries to trademark some the battle cry of “It’s cloppering time!” Marcus provided some momentary distractions that I always welcomed.

Salva Espin played to Duggan’s comedic strengths as well. I think my favorite visual joke of the issue was when the Commandos were battling zombies and Man-Thing was dumbfounded as to what to do in the background. Espin draws Man-Thing as wide-eyed and clueless throughout the issue; a mere bystander to the ensuing battle. Of course the first time he actually engages with one of his teammates to console them, he burns Frankenstein.

Another great blend of comedy/mythology critique was when The Boatman was arguing how the Commandos could not cross the River Styx because they were not dead. When Boatman is challenged by this notion he merely replies as a grunt just trying to do his job. I was explaining to a friend recently how I loved when movies compartmentalized larger ideas into a business state of mind ala Inside Out or Monsters Inc. I always get a kick out of something like mapping the idea of the River Styx Boatman onto a clock-punching job – how many of us have said a variation of “Listen, this is my job; I have to do this!”? So what tickles my fancy about this particular scene is that it looks at the position of the Boatman in a new light and asks the question “Why can’t we just walk the whole way?” Just like my reaction to Marcus, the answer is “Sure, why not?” Of course then we get the ironic and sad moment where Frankenstein punches the Boatman’s brains out after he permits them passage – oh Duggan. 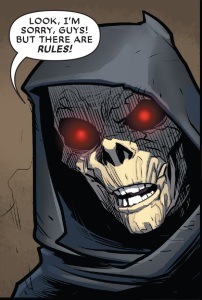 Mrs. Deadpool and the Howling Commandoes 2 is a book that basically says “screw the rules” and provides the entertainment experience it wants to. As for why Dracula is so scary? I feel like it’s just because he’s Dracula; so far we haven’t seen anything that would make us fear him more than any other monster in this book. Oh one more thing: bonus points for throwing in Bob the henchman.