Patrick: Mutants are among the more malleable allegories in comics. As a class of people persecuted for something they can’t control, they’ve acted as stand ins for racial minorities, religious minorities, disabled peoples, homosexuals – anyone with any kind of outsider status. But they’re also useful for other political debate: gun control, freedom vs. safety, etc. In one of his final issues writing the X-Men, Brian Michael Bendis employs a rarely-tapped metaphor and uses one of his own Mutants to tackle a topic that is decidedly apolitical, and casts an unlikely X-Man as the furthest thing from “outsider” you could imagine. It’s a delightfully simple slugline: what if Goldballs became famous?

First off, I absolutely love Bendis’ choice to elevate Goldballs to this weird new status. I’m generally very impressed with Bendis’ ability to have crafted a handful of new Mutants during his run on Uncanny X-Men and All-New X-Men – Eva Bell is a clear stand-out who seems to have already outgrown her humble beginnings in this series. But of those Mutants still in the mix in this series, Benjamin Deeds is the only real weak point in the group. 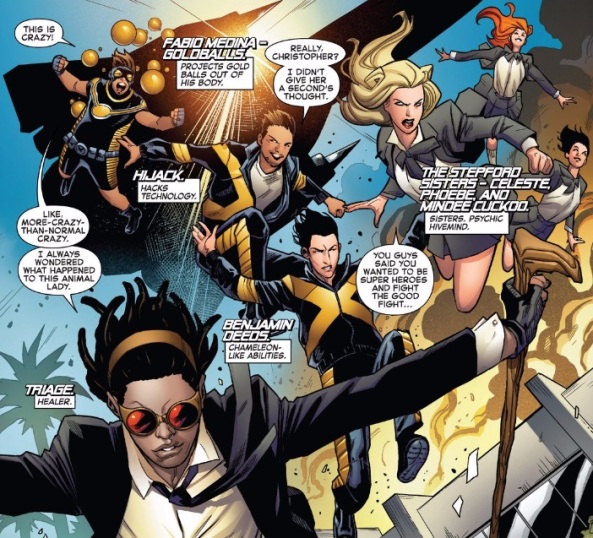 That leave us with Triage, Hijack and Goldballs — not to mention the work Bendis has done to differentiate the three remaining Cuckoos — and it’s invigorating to see them all in action at the top of this issue. It’s like a celebration of the newness of this series, and sort of a slap in the face to the conspiracy theorists that think Marvel is intentionally stopping development of new X-Men. With this issue, the goofy concept of a kid that can magically generate gold balls (and we get confirmation that they are literally made of gold) transcends its status as ONLY JOKE to REAL AND JOKE.

It’s also amazing how circumstantial Goldballs’ celebrity seems to be. He and his teammates are all working together to take out a Mutant raising hell in Tempe, but for whatever reason, he’s the one that gets the attention. Part of this is just the clarity of Goldball’s branding: his name and his power are one and the same. I suppose that’s technically true for “Triage” and “Hijack” too, but who the hell wants to chant either of those names? Fabio charges into battle shouting his name, and demonstrating his skills, like he’s constantly introducing himself.

But I think we’re also meant to credit part of his popularity to the unlikeliness of his popularity. People love an underdog story – remember how everyone lost their shit when Susan Boyle didn’t totally fuck up “I Dreamed A Dream”? Check out that video if you haven’t seen it – the performance is totally unremarkable, but the judges and the audience are totally blown away because Boyle presents herself as joke: plainly dressed, stammering, making awkward jokes. Plus, she looks like that. The audience, and then the rest of the world, responded to the idea that someone that society had been ignoring was in fact worthy of ALL THEIR ATTENTION.

That’s who Goldballs is. He’s not the most powerful or charismatic Mutant, but that’s not the point. Like so many catapulted to stardom, Fabio’s reign is heartbreakingly brief, with only mere glimmers of meaningfulness to his celebrity. Artist Valerio Schiti’s two-page splash of Goldballs making the rounds on talk shows is a charming encapsulation of his meteoric rise to fame.

It’s such a busy spread – it looks an awful lot like those photo collages in teen magazines (Do teen magazines still exist? Man, I’m old.) But we get a sampling of everything, from Goldballs fighting crime, to Goldballs partying, and all the media appearances in between. I’ve seen a couple people share that panel of Fabio accepting his body type on Tumblr, Instagram and Twitter, because it’s precisely the kind of thing people would want to share – especially as its being expressed by a Mutant that looks like that.

Schiti and Bendis are so smart to start seeding the voice of descent on this same page, running the interview with Fabio’s parents along the bottom of the page. Our eyes are well-trained enough to read the rest of the page first and then the strip along the bottom, but those five panels are something you have to actively ignore while you’re taking in the rest of the page. So when you finally do move your eyes down there to get that piece of the story, you sort of have the realization that this revelation was waiting in the wings the whole time. It’s a masterful stroke of visual irony, and I’m not sure I’ve ever seen anything like it before.

When we turn the page, Fabio’s gone from exalted to despised, and the series settles back in to a more recognizable status quo: Mutant scorned by society and regrouping at the Jean Grey school. Just as Goldballs can’t be a celebrity for ever, X-Men can’t be about celebrity forever. Eventually, he’s going to go back to being an outsider and the series will go back to being about outsiders.

Taylor: I also really liked this issue, Patrick, but for different reasons. Mainly, I think Bendis is just one of those writers who gets how to write young people. For whatever reason, there are writers who just understand how to write stories that appeal to and accurately represent the younger generation. Think J.D. Salinger or John Green. I think Bendis’ style, while not exclusively meant for a younger audience, is such that it resonates greatly with people of that age.

All of this is to say, I love how Uncanny has turned its focus on these new, young mutants. This issue in particular focuses on how this young “Hero Squad” handles their power and the fame that comes with it. One instance of this comes early on when the X-Men stop Blake’s monstrous rampage. To try and calm her down, Benjamin shapeshifts to match her appearance and questions why she even started this whole thing in the first place. Then this happens. 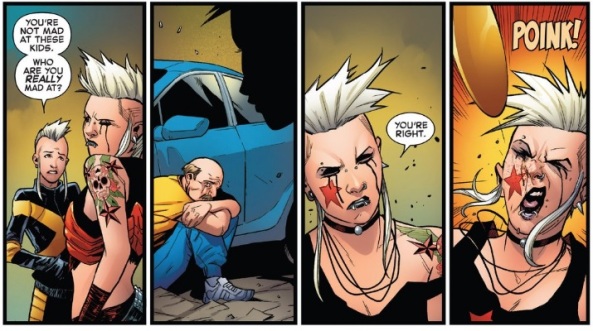 It seems like Blake is about to stop her attack after realizing that she shouldn’t take her anger for her dad out on innocent people. Before we reach that point, however, Goldballs chucks a ball at her face, knocking her out. It’s a totally unnecessary move and one that undermines the restorative justice work that Benjamin has just accomplished.

This illustrates a couple things about the relative youth of this bunch of X-Men. First, they aren’t perfect at their jobs. A more mature group of X-men would have known when the situation was diffused and not have continued an attack on a fellow mutant who is docile. But Goldballs is young and either because of adrenaline or inexperience takes what could be a moment of reformation and plants the seeds of bad blood for the future. A second thing this illustrates is how frequently those who make the headlines aren’t necessarily the real shakers and movers. Rather, it’s those who make a good Vine or Youtube clip. Goldballs certainly fulfills that requirement. And while he carries himself well throughout his fame I have to wonder what it would be like if Benjamin or someone else was the face of the Hero Squad instead.

When the inevitable fallout from the fame happens, the Hero Squad has to return to the protection of their elders at the Jean Grey school. While that might not be the situation any of them wanted, it does afford them the stability they need.

So the prodigal sons and daughters return to the fold. Again, this is a feeling most young people know all too well. After a huge mistake or misadventure you have to return to your elders for guidance, protection, and support. In the case of this issue I find this to be especially satisfying, not because I’m necessarily happy for our Hero Squad, but because it creates a strong narrative arc in this issue. First off in the issue, we have the Hero Squad ascending where everything is wonderful and good. Later, as the pressure mounts they suffer a severe setback. Then at the end they come to a better understanding of their place in the world and their surroundings. It’s basic story telling 101 but frequently in comics I’ve found single issues lack this type of clarity. I appreciate that Bendis, in this case, has narrowed his narrative focus and delivered a satisfying single issue. Better yet, it still manages to make me excited to see what happens next to our young X-Men.

Ultimately this all comes back to the theme of outsider vs. insider that you mentioned, Patrick. Even when accepted by the mainstream, there are still going to be those who attack and hate mutants. This is an accurate representation of our own world and is a lesson that I think most young people have to confront at some point. Hopefully the young X-Men here won’t let it get them down.