Look, there are a lot of comics out there. Too many. We can never hope to have in-depth conversations about all of them. But, we sure can round up some of the more noteworthy titles we didn’t get around to from the week. Today, Michael, Spencer and Patrick discuss Batgirl 42, Gotham By Midnight Annual 1, Lobo Annual 1 and The Flash Annual 4.

Michael: Have you ever noticed how the fifth Wednesday of a month always brings an odd grab bag of titles from DC? It’s typically full of books that are behind schedule and trying to catch up and the occasional Annual issue. So I guess it’s no surprise that this week’s DC offering is full of five Annuals in total. Let’s cover a few of them, shall we?

Michael: When DC announced that Jim Gordon was to be the new Batman, it was Barbara Gordon’s reaction that I was the most interested in watching. Batgirl 42 is the second issue post-Endgame and it keeps chugging along with some great Batman-Batgirl/father-daughter interactions. Cameron Stewart and Brenden Fletcher give Jim a much-needed “time out” where he gives Batgirl a kind of “my hands are tied” speech; the GCPD wants all non-sanctioned Bat-vigilantes out of business. Recent New 52 interactions between Batgirl and Gordon portrayed the Commissioner as being bullheaded and quick-to-judgment. I was so pleased how goddamn decent Jim Gordon is in this issue – Barbara was similarly pleased. Seeing Barbara and Jim team up against Livewire was a delightful treat I didn’t know I wanted.

Babs Tarr once again incorporates her near-manga style with the characters’ expressions and reactions: a little heart here, some dumbfounded question marks there – it works. Barbara Gordon has always been a daddy’s girl (in the best ways), and Tarr gives Batgirl some Bat-dad interactions that are oozing with admiration and respect. Barbara finds herself in the unique position of being her father’s superior in the field – she chides the new Batman for not pulling the disappearing act – but also reverts to a proud daughter when Jim genuinely surprises and impresses her. I gotta say that as much as I’m on board to watch Bat-Gordon do his own thing and not be Bruce Wayne’s Batman, I was kind of jazzed to see him out of the robo-bunny suit in Batgirl 42. Like Jim Lee and Superman’s New 52 redesign, I don’t think that many artists can pull off Greg Capullo’s new Batsuit just yet.

Patrick: I don’t think I’d ever want to argue that an artist’s inability to draw a specific hero is intentional, necessarily, but I do think there’s a nice synthesis between how Babses Gordon and Tarr view and value this new Batman. Batgirl points out how useless that new Batsuit is going to be against a villain like Livewire – and that’s something that we see play out in their final fight together. More importantly, that big ugly Batsuit — and the company it represents — are a barrier between Babs and Gordon, just as the Batsuit and it attendant responsibilities seem to be between the creative team and the story they want to tell. Notice how they don’t really push the “Batman vs. Batgirl” angle so much as they gently remind us that it could be a thing somewhere down the road. Every time Batman and Batgirl meet, there’s always this necessary of Gordon stepping out of the suit so they can interact, and it’s always a huge relief.

Finally, now they can interact like people instead of punching dolls.

Patrick: The thing that sets Gotham by Midnight apart from any supernatural procedural is the looming threat of the Spectre. No matter how close our heroes get to righting whatever wrongs on their own, there’s always a possibility that the living embodiment of God’s vengeance is going to come down and just obliterate everything. But before we get to that sort of Etch-a-Sketch Ending for the Annual, Ray Fawkes lays down an intriguing mystery whose answer is refreshingly rooted in emotions rather than mythology. Corrigan and Drake are on the heels of the famed “Gentleman Ghost,” who has courted a rich young socialite so he can steal her necklace, the Tears of Euripides.

(There’s some fun to be had with that Euripides reference: Euripides is known as the progenitor of Greek theatrical dramas, and is widely believed to be the first well-known writer to insist on the vulnerability and humanity of his heroes. It’s no surprise, then, that a story that bears this reference should build both the villain and the mystery off of a character’s need (or weakness) for love.)

Artist Christian Dunce has some pretty long shadows to light, as the series has been drawn by the likes of Ben Templesmith and Juan Ferreyra. By comparison, Dunce’s pencils are much more straightforward, favoring clearer staging over the more atmospheric offerings we’ve seen in the past. Dunce is able to replicate a lot of that atmosphere through expressive acting — using the ever-changing appearance of the Gentleman Ghost to lead the way. I’m also fascinated with the way he draws Lisa Drake: tough, cool, confident. 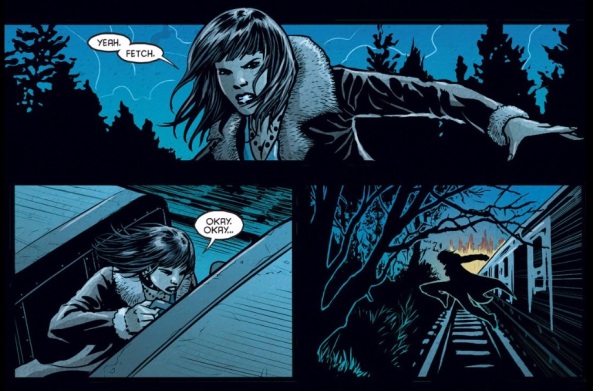 Even as Fawkes’ copy makes it clear she has to psych herself up for that jump, Dunce makes sure she’s absolutely commanding every single one of those panels – notice how she’s perfectly centered in all three. Plus, that third panel is about as cool a hero shot as you could ever hope for, right? Lisa Drake may be my new favorite GCPDer.

Spencer: And like any good story, the Gentleman Ghost serves as a bit of a mirror for our heroes, who both display a need for love similar to the Ghost’s. Corrigan is the more explicit parallel, as the Ghost senses that Corrigan hasn’t loved or been intimate with someone in quite a while, long enough that even his advances might be welcome (and kudos to Fawkes for giving us a character with charm/seduction powers who doesn’t just use them on people he’s attracted to). Corrigan fends him off, of course, but the Ghost has clearly struck a nerve; a loss of love is just one of the many downsides to hosting the Spectre.

I’m a bit less sure what to make of the way the Gentleman Ghost undermines Drake’s relationship with her boyfriend, but even if it’s a plot point that’s never addressed again, I appreciate the note of ambiguity their interplay gives the issue’s finale. Drake may never understand exactly what the Ghost did to her or how legitimate her feelings and doubts were, and that will always haunt her, perhaps even more than the more typically supernatural threats she faces every day. How do you rattle someone who deals with the unthinkable every day? Throw something far more mundane in her path.

Michael: Cullen Bunn is making his rounds these days with the Big Two: with DC he’s spending most of his time in the stars. It must be hard to write multiple series under the same banner and resist the temptation for those series to crossover. After all crossover stories are typically a lucrative venture, if nothing else. For better or worse I think that Cullen Bunn has fallen prey to the crossover between his series Lobo and Sinestro. Lobo Annual 1 is a Sinestro story in Lobo’s clothing. Everyone’s/no one’s favorite Czarnian is tasked with the mission of taking out Sinestro, giving the uninitiated reader a crash course in the ranks of the Sinestro Corps. After checking out the requisite alien dive bars and bathhouses, Lobo tracks down the Sinestro Corps, only to find out that Sinestro has orchestrated the whole manhunt. 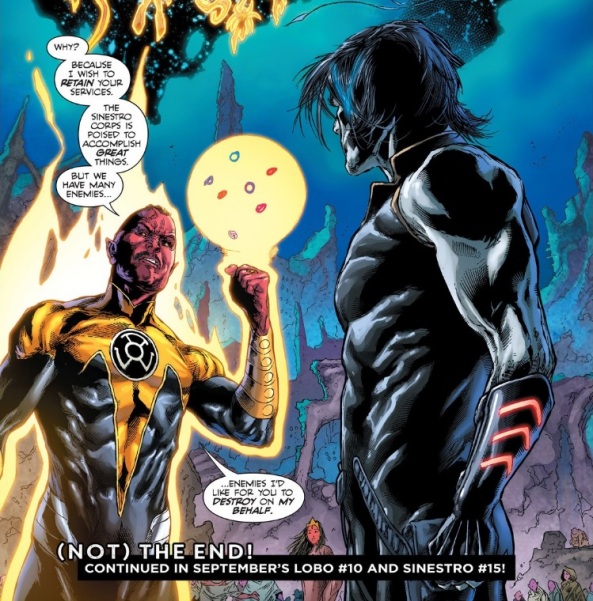 Bunn takes us through a 40-page story with plot points that could easily be explored in a standard-sized issue. Let me be clear: I am a New 52 Lobo hater; I don’t like the pretty boy redesign and I think that this issue reads like a Boba Fett story. The promise of a Sinestro/Sinestro Corps crossover is tantalizing enough for me to finish the issue however. I was half-thinking that Sinestro would offer Lobo a ring for himself; but was happy to see that Sinestro was merely enlisting Lobo’s services as a mercenary. While I’m partially interested to see where this goes, it doesn’t  completely make me jump for joy having read the first Lobo Annual.

Spencer: Most Annuals stick to one of three formats: either they’re the epic final chapter of an ongoing storyline, an oversized standalone story featuring the titular character, or an opportunity to further explore some side characters and villains without bringing the ongoing series to a halt for a month. Van Jensen and Bong Dazo’s The Flash Annual 4 falls firmly in that third camp, exploring the origins, powers, and personalities of Eobard Thawne’s Flash-killing squad. I like how diverse Thawne’s teammates are and am intrigued by the possibility that all their abilities may derive from different applications of the Speed Force, but by the time the fourth teammate’s introduction rolls around, it’s all started to feel a bit repetitive.

Fortunately, Jensen saves things with a strong closing sequence that establishes Thawne as a manipulative mastermind, just as ruthless and cunning as his previous incarnations in the old continuities ever were. There’s no way we can trust anything Eobard says now, so I’m curious to see if there’s any truth at all to his claims that Flash will end the world, or if Eobard’s hatred for Barry Allen is simply based in sheer irrational jealously like in previous continuities. Either way, Eobard and his crew are shaping up to be a particularly memorable group of baddies, and I’m looking forward to their upcoming clash with the Flash.

(That said, I’m disappointed by the new incarnation of my favorite Rogue, the Top. Outside of his powers and name, this character retains none of Roscoe’s over-the-top smarm and arrogance or even the sides of his personality that allowed him to essentially grant himself superpowers through sheer stubborn tenacity. He barely feels like the same character at all; maybe that’s the point, but it bums me out regardless. Magali, Folding Man, and H-Block are all pretty rad, though.)