Patrick: Comic books are the go-to medium for fleshing out stories and characters set up in movies, TV shows and video games. There’s always going to be a Firefly comic or something featuring Lara Croft – and 90% of the time, those series are filling in gaps in the narratives. And those gaps — those times before or after or during the main stories are usually filled with precisely that: more narrative. That’s not fair to comic books as a medium, which move in their own rhythms and will always be compared to the storytelling prowess of the original. We’ve had a ton of conversations on this site about what we even want from these things: Star Wars isn’t just a set of aliens and some colloquialisms about the Kessel Run, it’s the music, the motion, the sound effects, the light, the performances. Star Wars 7 is an interesting issue; it fills in gaps in the narrative we’re already reading, which in and of itself is filling in gaps in a different narrative altogether. But rather than letting the necessarily weak plot drive the issue, writer Jason Aaron imagines what Obi-Wan Kenobi must have felt during his years on Tatooine, and builds a story out from there.

This kind of emotion-first storytelling is actually not particularly common in Star Wars. Luke is such a prototypical hero that the audience doesn’t need to be convinced of his humanity – his goals are clear enough on their own, and it doesn’t take any additional justification to be sympathetic to him. Kenobi, on the other hand, is largely telling a story of inaction, and his disappointment at his failure to stay inactive. That’s a fascinating role to cast Kenobi in because there’s really no reason he’d even have to physically struggle on Tatooine. He could be like Superman on Earth, zipping around and righting as many wrongs as he could, but his duty demands that he not do that at all. In this way, Kenobi’s heroism ends up being the antagonist of this issue.

There is, undoubtibly, more to Ben’s story — his journal says as much — but this issue isn’t concerned with exploring incident in flashback, as much as it is in explaining Kenobi’s pain. Stuart Immonen will be taking over art duties from John Cassady on issue 8, and they both have styles that are rooted enough in realism as to provide of sense of visual continuity for this series, but issue 7’s art comes to us from Simone Bianchi. Bianchi’s work is much more stylized, liberally inking dark shadows and outlines, which goes a long way toward selling the scorched shadows of the unending drought on Tatooine. Everything feels very angular, very craggy. Even Kenobi’s face or billowing clothing have an almost elemental appearance, uniting the characters with their environment. 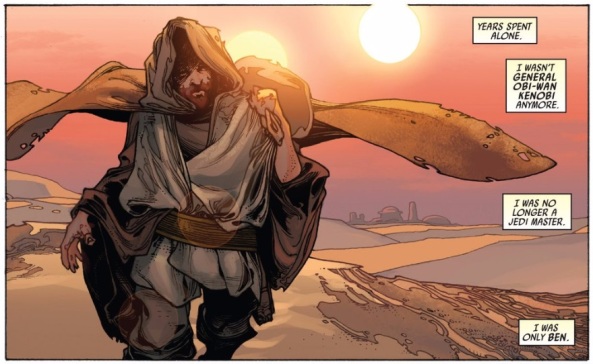 I’m amazed by Justin Ponsor’s coloring (at least, I think he’s the colorist, the credits are all in Star Wars-language), which implies light and texture through a variety of cool, graphic techniques. Just in the panel above, we see solid blocks of colors, some gradual fading from one color to the next and stippling, spray-paint-esque techniques to sell everything from the ubiquity of the rolling sand dunes, to the thick Tatooine sunset to the filth on Ben’s cloak. Ponsor is marvelously matched with Bianchi, whose work might read a little too much like Szymon Kudranski‘s were it not for Ponsor’s warming affectations.

A be-droughted Tatooine is also the perfect thematic backdrop for this story. Any other terrestrial location would have implied too much potential. Hell, even the vacuum of space would have suggested the multitude of worlds out there to explore. We get a taste of that at the end of the issue when we meet up with Luke, and we’re snapped back to the freeing world of infinite narrative possibilities. But as long as we’re stuck on Tatooine, even those magical Jedi tasks are going to be undercut with the persistent theme of death, drought and famine.

Not to beat a dead horse, but look how well Ben becomes part of the landscape. He’s made up of jagged lines and nondescript, shapeless shapes – that’s something that Bianchi’s artwork achieves that you wouldn’t be able to replicate with another artist or in another medium. Whether we’re filling in holes in a different story or not, this is story whose effectiveness is improved by the medium, rather than hindered by it.

That shouldn’t surprise me by this point: editor Jordan White has been doing a great job of driving this Star Wars machine like it’s a comic book franchise, not not just supplemental material, since the first issue. Elliott, when I asked you if you wanted to write about Star Wars, I believe you’re reaction was “I love Star Wars!” so I’m eager to hear your thoughts on this little side story. Did Bianchi’s art work for you as well as it did for me? Did you find Obi-wan’s strength heroic or frustrating? Or both? Also, how great is it that this story isn’t hampered by dumb cameos or references to shit we might recognize from the movies? It’s the story of a drought we never knew occurred during Luke’s childhood. Doesn’t really need to be more essential than that, does it?

Elliott: You’re absolutely right, Patrick — that was exactly my first reaction. I mean, come on, this is Star Wars we’re talking about! The only people that haven’t seen Star Wars are the characters, because they lived the Star Wars.

I do want to point out that Kenobi is not in a particularly unique position for a Jedi: he’s alone on a backwater planet ruled by injustice. As guardians of peace and justice in the Old Republic, Jedi actually sought out such worlds. (I would also like to point out that a drought on Tatooine is like shipping coals to Newcastle.) But Kenobi’s struggle is not with injustice; it is, as you recognized, with his own innate sense of heroism, and the inaction that his present circumstance demands. It is this focus on internal conflict that makes for a unique, and interesting, story.

The Jedi Order succeeded as long as it did because it wed contemplation with action – but, as with many things during the Dark Times and the rise of the Empire, that balance is broken. Kenobi is now cursed to only observe, never to act. Toward this end, I have to agree with you again: the art of this issue does a particularly striking job depicting Kenobi’s misery. The barrenness of the landscape is rivaled only by Kenobi’s spiritual barrenness, the bleached skulls of Tatooine floating around the Jedi as he mediates. The levitating bones come crashing down, and Kenobi throws himself to the ground, seeking some sort of escape from the oppressive weight of his existence. On a world of death, he is even denied the chance to die. 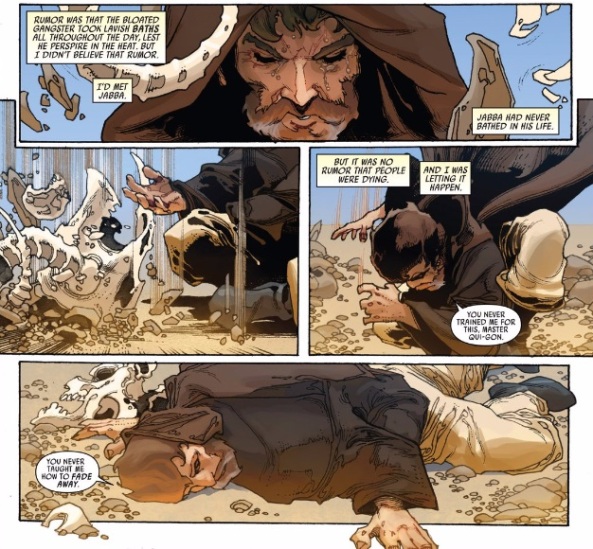 Ironically, the artwork and story are most powerful when Kenobi is ruled by inaction. But this situation is, out of necessity, an unstable equilibrium. Whatever our protagonist might say at the beginning of the story, the reader knows that Kenobi is still a Jedi — and sure enough, the comic concludes with Kenobi standing, hood back and lightsaber aflame, reaffirming his full name, and in so doing, reaffirming his attachment to the Jedi Order. The story is framed, quite literally, as a parable the young Luke Skywalker can learn from. In that manner, it always suffered under the constraint of needing to end on a heroic note.

But this tidy narrative conclusion ignores another constraint: the reality of Kenobi’s situation. He will grow old and his hair will turn white, all while his vigil over the young Skywalker continues to demand he hide from the Empire… and from his own sense of duty. The great strength of this issue comes, not from the apparent resolution of the problems facing Kenobi, but from so powerfully depicting those problems in the first place. The tension and heartbreak of Kenobi clenching and unclenching his fist as he watches a criminal shakedown, only to turn his back on the scene, is more striking than the panels of battle that provide the issue’s cathartic release.

For all of their association with superheroes and fight scenes, one of the great strengths of comic books is their ability to tell stories of quiet reflection. It is nice to see Marvel’s Star Wars run recognize that, and to parlay that rather unique ability into deepening the Star Wars universe.

Elliott Harwell is working on his doctorate in European history. He also knows far more about the canon of the G.I. Joe comics than he really ought to.