Drew: I’ve played the “what superpower would you want” game enough to know that most people will settle for “flight” or “invisibility.” Does that predictability speak to the overwhelming awesomeness of those powers, or some failure of those individuals to be creative? I think it might actually speak to how we think about superpowers: they’re so arbitrary as to be kind of meaningless. Indeed, there are relatively few characters whose powersets are actually limited to just “flight” or “invisibility,” giving even those most popular choices the air of not quite being enough. Which is why Sex Criminals is such a revelation. “A series about a couple with the ability to stop time” doesn’t get nearly the reaction as “A series about a couple with the ability to stop time when they orgasm.” Part of the charm is the novelty, sure, but the premise requires that sexuality play a central role in the series. That makes it unique beyond its superpowers, as issue 11 takes us into the private lives of virtually every character via their sex lives.

And I mean every character. At this point, it’s not surprising to see Jon and Suzie going at it, and I think we can extend the same banality to Robert Rainbow, Rachelle, and even the “Sex Criminal of-the-week” (and yes, I realize how inadequate of a descriptor that is). Honestly, after seeing Jon’s bathroom full of sexual partners, there’s not a lot even distantly related to these characters that would come as a shock — up to and including an anime pixie made of semen.

That’s not to say that this series can’t surprise me anymore. Quite the contrary — there were two moments here that I couldn’t have anticipated. The first is the scene between Kegelface and Jon’s psychiatrist. We saw them interact briefly at the beginning of issue 10, but I certainly wasn’t expecting to come upon them mid-blowjob here. Ultimately, Kegelface’s plan to use her abilities to gain access to Jon’s file makes sense, even if the specifics don’t necessarily call for a blowjob. She’s clearly getting some level of pleasure out of this (that is, beyond what she could do on her own), and she’s clearly tired of explaining her “understanding” with her husband to people. But honestly, the biggest shock was just seeing the psychiatrist in a sexual situation. As an authority figure (and an emotionally supportive one, at that), it’s hard not to see him as a teacher or even father, which makes seeing him as a sexual being somewhat uncomfortable.

(I could probably spend the rest of my word count debating with myself over the way sex is kept secret in our society, and whether we deny people their humanity by putting them in roles that are tacitly asexual (or if we’re just in denial — let’s face it, our dads have all had sex), but that’s not really the point here. Kegelface is relatively open sexually, but her private matters are still private.)

My other big surprise in this issue isn’t actually in-narrative, but rather focuses on just how clever Chip Zdarsky is as a storyteller. His sense of humor has long been apparent from the visual gags he crams into every panel he can, but the cleverness I’m referring to here has more to do with how the story is told. It’s not always easy to illustrate how important image choice is in comics, but this issue is full of what will now be my go-to examples. Just look at how effectively this two-panel sequence illustrates exactly what Suzie is talking about.

It’s a cute visual gag that illustrates the power dynamics in that room. Throughout that scene, Suzie is cut out of the panel as often as she’s cut out of the conversation, forcing her to awkwardly enter our own sightline just to get a word in. It’s such a brilliant piece of directing, I almost wish Matt Fraction hadn’t called our attention to it so specifically. In the end, it may be more important (or even more true) as a reflection of Suzie’s subjective experience of that conversation than any kind of objective truth, making Suzie’s opinion a bit more central to our understanding of that scene.

The point is, this was a great issue, full of all kinds of subtlety I didn’t leave myself the space to properly dig into. I suppose the biggest elephant in the room is Doug D. Douglas, but we’ve also got that scene with Rach and Robert, Ana’s rejection of any and all criminal activity, and Jon and Suzie living it up in style in Miami. Michael! Did any of those beats catch your eye? Or, you know, whatever else you might have noticed.

Michael: Drew mentioned how it is difficult to picture authority figures –moms, dads or therapists – as sexual beings. Sex Criminals is a book that likes to remind us that human beings can be (and typically are) more than one thing. The human brain likes to simplify things as much as possible – it’s easier to view a person as one particular thing when we meet them – but the truth is that no one person plays one simple role. I think seeing people in our lives as a particular symbol of one thing or another is important for us to reconcile our own role in our personal universe; but that same person most likely views us in the same manner. One of my favorite self-indulgent meta films Synecdoche, New York states as much by saying “None of those people is an extra. They’re all the leads of their own stories. They have to be given their due.” No one person is one simple thing – we all have our own origin stories, personal battles and inexplicable complexities. Just like Jon’s psychiatrist, Dr. Ann Kincaid cannot be confined to one role. In Jon’s worldview, Ann is an icon of his masturbatory youth and sexual awakening.

For Jon, Ann (the former porn star Jazmine St. Cocaine) is a symbol of something that is illicit and forbidden; but that doesn’t mean that she subscribes to a doctrine of lawlessness and crime. Ann holds herself to her own personal moral standards. She was free and willing to have sex in front of a camera but that doesn’t mean she wants to break the law and steal from people – even faceless corporate bank people. Fraction and Zdarsky give us a moment where Jon is legitimately surprised that his former fantasy woman won’t comply with their thieving plan. Fraction touches on the wish-fulfilment nature of pornography in a delicate manner that doesn’t judge pornography itself, but the fan base that it services.

Similarly, Sex Criminals’ main message has been: “hey, we have all had sex; let’s acknowledge that and move on.” Fraction and Zdarsky want to let us truly know the characters they have created so we see them in their most private and personal moments – when they’re cumming. So while I’m not clear on the super-powered intricacies of it just yet, it makes total sense to me that Douglas D. Douglas can ejaculate a semen pixie. On the same note, I tried very hard to zoom in and figure out what the psychiatrist’s “broken heart butt cheek tattoo” said. No dice, however.

Ideally a writer and artist have a deep knowledge and adoration for one another so they can play to each other’s strengths in perfect synergy. I love how Fraction continually pimps out Zdarsky’s talents in his script – both directly and indirectly. When Douglas D. Douglas is headed to the Pan-Asian Supermarket “That’s Amasian!,” Fraction presents the “editorial” choice to deny Zdarsky the opportunity to fully-flesh out the particulars of such a market. Instead, Fraction covers four panels with exposition of how Zdarsky would go balls-to-the-walls on describing the minutest of details. It’s a “complisult” that shows how much the Sex Criminals writer admires his artist; it’s not the first time he’s done this either. Fraction writes about Zdarsky’s artistic predilections like they are old friends, which makes me that much more engaged as a reader.

To answer Drew’s question a little late in the game, I did enjoy how our Sex Criminals team played up the pop culture in their depiction of Miami. Zdarsky fills the Miami intro page with plenty of references to Miami sports, celebrities and CSI; not to mention some easter eggs of pot-smoking dolphins and nut-popping beach bros. I did quite enjoy how hard both Zdarsky and Suzie & Jon committed to the Miami TV theme. Suzie and Jon are decked out in Miami Vice-inspired outfits when they find Douglas. Also Fraction wastes no time with the CSI jokes, one of which Jon makes as he pulls sunglasses off of his glasses. Fraction and Zdarsky know what they’re doing and what they’re doing is absurdist NSFW crazy time fun. 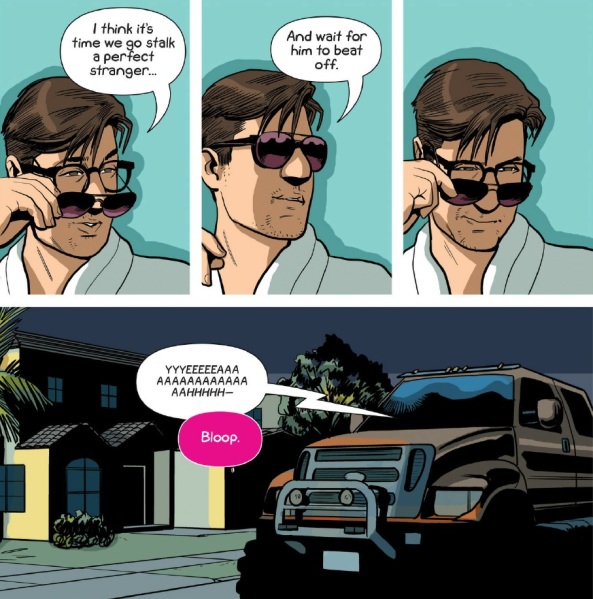