Mark: One of my favorite things about Max Rockatanksy is that despite being crazy he’s an incredibly pure hero. There’s a trend in pop culture that seems to be sunsetting where every hero was an anti-hero. Yes we were rooting for them, but in the context of the real world we wouldn’t have been. But as interesting as anti-heroes can be, it’s hard to beat a straight-up hero. Indiana Jones is a scoundrel, yes, but he only wants to do the right thing. Ethan Hunt is blowing up in movie theaters right now in a fifth Mission: Impossible film. Max is the same way: yes, he has flaws but his motives are incredibly true. There’s something fundamentally appealing about these characters in a way anti-heroes can’t compete.

Like the film Fury Road, the premise of Mad Max: Fury Road: Mad Max 2 is simple: Max is recruited by a mother to rescue her daughter from a Buzzard compound and retrieve his stolen car in the process. Because Max’s motivations in the world of Mad Max (survive) and as a fictional character (be a hero) are so clear, that’s all we need.

In our discussion of Mad Max: Fury Road: Nux and Immortan Joe 1 one of my largest sticking points was that the character revelations didn’t do anything to enhance Nux or Immortan Joe as characters. It provided additional backstory, sure, but didn’t really add anything that enhanced our understanding of their motivations in the film. It’s the opposite for me in Max 2. The storyteller closes the issue with a warning against seeking vengeance. This is the ultimate cause of Max’s madness: a never-ending cycle of loss and revenge.

There is an additional lesson in learning from the mistakes of the past, and on first glance that would seem to contradict the film. In Fury Road, Max is reluctant to help Furiosa and the escaped concubines precisely because he fears repeating past mistakes. But what the issue makes clear is that Max did not err in helping Grace and her mother. That was the heroic thing to do. His mistake was in not lingering to ensure their safety. He almost makes the same mistake with Furiosa when they start to bike across the salt flats, but after a brief moment of hesitation he faces his fear and returns to them, doing everything he can to keep them safe.

As a big fan of the film, Max 2 provides smart bookends to Fury Road. The bulk of the issue is a prologue to the events of the film (exactly how long before is left unknown). We didn’t need to know the story of Glory and her mother, but having that extra bit of information adds an additional layer of depth to Max’s motivations in the movie. And at the end of the issue we see that Max and Furiosa’s victory over Immortan Joe and subsequent return to the Citadel didn’t create a permanent peace. How could it, really? It’s a cool note on which to end Vertigo’s Mad Max run.

But even better than being a companion piece to a movie, divorced from the events of the film the issue is a entertaining, satisfying read on its own. It’s difficult to draw clear action beats in a comic book, but Mark Sexton provides a sense of context and location that enhances the action because you know how all of the pieces fit together. The centerpiece of the issue is a car chase escape from the Buzzard’s lair, and even with all of the moving pieces it’s clear, and subsequently, thrilling. 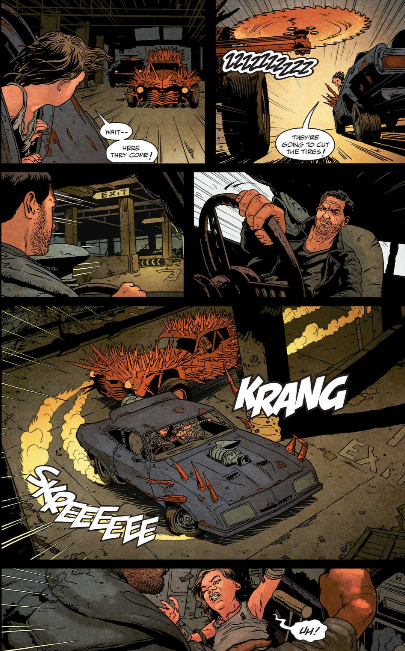 The story measures up as well. I read through the entire issue not realizing the connection between Grace, her mother, and the events of Fury Road, so I was completely shocked by their deaths. It was such a well-realized tragedy that I wonder if readers who didn’t see the film and came in completely cold were even more affected. If you saw the film and made the connection before I did, you probably saw where the story was heading, but I didn’t pull all of the threads together until the end and it was very effective.

What’d you think, Drew? Were you as caught up in the story as I was? Did the action work for you?

Drew: And how! You’re right to suggest that it’s hard to convey action in a static medium — especially when compared to the crystal-clear and utterly propulsive chase sequences of Mad Max: Fury Road — but Sexton manages to not only thrill us, but also demonstrate some of the strengths comics have over film. The biggest strength is clarity. Don’t get me wrong; George Miller is an exceptionally clear director, but his camera can only linger on an action beat for so long before it loses that momentum. That means we can’t catch all of the details in a single viewing. That’s exactly what makes Mad Max: Fury Road so rewarding to re-watch, but it also gives comics a bit of an edge: we can slow down and take in all of the details.

Take, for example, both of the images Mark included above. The first doesn’t seem all that visually interesting — just Max heading off in heroic fashion, really — but sitting with it allows us to appreciate its smaller details. First, I absolutely love that their hideout is an abandoned, buried church. We don’t need the whole establishing shot to understand this — just the broken rosette window which opens directly onto a sea of sand. Both of those establish how old this desolation is, recalling the Romantic image of crumbling, ancient Cathedrals.

But that sand doesn’t just establish the age of this world; it also demonstrates how isolated the church is from the city. Even without reading into the moral vs. capitalistic implications, that’s a powerful image: just one set of motorcycle tracks riding in, and one set of footprints going out. It also, unfortunately, foreshadows the eventual demise of Glory and her mother, in showing just how exposed all of their movements really are.

Things get even more interesting in the action sequence Mark included. The sequence would serve perfectly fine as a storyboard for a film sequence (though, knowing Miller, there would probably be a few more inserts at closeups along with these larger action shots), but because they’re still, we’re able to really appreciate all of the details. In particular, I love that Max’s Interceptor already has Buzzard spikes sticking out of it — it was just starting to be converted when he stole it back. That’s not a detail Sexton and co-scriptor Nico Lathouris forget, even showing Max wrenching them out of his car by the end of the issue — it’s just a fun little detail that I might have missed if I couldn’t spend time soaking in each image, or even flipping back to understand when they first showed up.

Really, any panel from this issue is full of that kind of detailing. The world of Mad Max has always been particularly rich in those details, from costumes to props to sets, and comics provide a natural platform for really absorbing all of that storytelling. It’s far from a replacement for watching the film, but anyone looking to spend more time in the world of Mad Max need look no further. Perhaps more importantly, Mark’s reading that this episode is what motivates Max to go back for Furiosa in the desert (which I think is absolutely spot-on) makes this a key piece of character development. It’s obviously not necessary to appreciating the film, but it gives us just a bit more context for who Max is and what ultimately drives him.