Spencer: I’m a suburban kid at heart, but I also really enjoy the city. That makes me a bit of an outlier amongst my extended family, which is filled with farmers and country folk. I dunno, I just enjoy having people and places close to my home — the quiet and sparseness of the country creeps me out big time. No matter which end of the spectrum you fall on, though, it’s obvious that there’s a drastic difference between the city and the country. In Dennis Hopeless and Natacha Bustos’ Spider-Woman 10, those differences have come to represent Jessica Drew’s dual lives. The city — New York City, to be exact — is Jessica’s old life as an Avenger, a complicated life full of chaos, while the strange simplicity of her new life as a P.I. is perfectly — and quite literally — represented by the American Midwest. It’s crystal clear which of those lives Jess prefers, but with the end of the world approaching, she doesn’t really have a choice as to which one she must live.

Spider-Woman 10 is the conclusion of a two-part story that finds Jess, Ben Urich, and former-supervillain the Porcupine facing a mind-controlled ghost town in middle-of-nowhere Kansas. As Spider-Woman fights off some Hulk-ified cattle, Porcupine manages to track down and defeat the source of the problem: the corrupt CEO of National Beef, who’s been pumping his meat full of mind-control drugs so that he can manipulate the town like puppets. It’s an absolutely bonkers plot, and its sheer insanity is only amplified by the fact that we never even find out why or how the CEO is doing it to begin with. It’s a throwback to the Silver Age, where those kind of complexities took a backseat to establishing a new evil for the hero to battle. These aren’t the kind of cases Jess took in NYC — even the fact that the CEO’s plan only worked because vegetarians are almost unheard of in Kansas sets this case far apart from the vegan-filled city, and attributes the throwback nature of Jess’s new life to her new Midwest location, a place just slightly behind the rest of the country.

Fortunately, Hopeless doesn’t play the slightly old-fashioned nature of his Midwest for laughs or make it a negative feature — in fact, Jess seems to embrace her new life precisely because it’s so uncomplicated. Jess is a somewhat socially awkward character, but I’ve never seen her look as content and comfortable as she does at the end of this issue, joking around with her new friends to the point where she doesn’t even want to leave the room to get ice.

Unfortunately, it doesn’t last. Black Widow shows up and brings Jess’s old life — here represented by her old, more traditionally “super-heroic” costume and by news of the Avengers’ typically complex and fast-paced adventures back in NYC — crashing back down around her. It’s the end of the world (see Secret Wars), and although Jess tries to talk her way out of helping, both she and Natasha treat her returning to New York as an inevitability.

In the end, Jess doesn’t even say goodbye to her friends before taking off, and I think that says a lot about how she views herself and her place in the world. Jessica Drew never had a normal life, even as a child; the complicated world of spies, superheroes, and supervillains is practically in her blood. Running off to the Midwest is her way of trying to gain some sense of the normalcy she never had, but deep in her heart, Jess doesn’t feel like she belongs in that “normal” world with “normal people.” When Natasha arrives, Jess almost seems guilty to have ever thought this new life could be permanent in the first place; she leaves it all behind without saying goodbye as if embarrassed that she ever even attempted to fit in.

Porcupine’s sudden bout of competency probably doesn’t help in that department. Don’t get me wrong, Porcupine pulling his weight is no doubt exactly what Jess wants, but at the same time, I’m sure it makes her feel just the tiniest bit redundant. Porcupine essentially solved this case on his own, taking over Jess’s role as hero by following the clues and taking down the “big bad” while Spider-Woman fought grunts. In light of Natasha’s return, this probably made Jess feel even less like she belonged or was needed out in the Midwest. It’s clearly the life Jessica wants — even when piloting the life raft with Natasha she refers to her Cadillac and her friends as “home” — but it’s also a life she’s now convinced herself will always be just out of grasp, a life that doesn’t have a place for her no matter how badly she wants it.

That’s an awfully sad ending to this volume, though I guess the end of the world isn’t exactly known for its happy resolutions. Still, it’s a credit to the fun and absolutely charming new life Dennis Hopeless has given Jess that even this fast-paced reader wants to see Jessica keep living a life of low-stakes adventures. They’re a blast, and I’ll without a doubt be back after Secret Wars hoping for more. No matter how strange a turn the upcoming pregnancy seems for Jessica Drew, I’ve got faith in this creative team to sell me on it.

Taylor! I believe this is the first time we’ve talked Spider-Woman, so I’m curious to hear your take on this issue and on Jessica’s wacky new life. Or maybe you want to talk about Porcupine — for practically being the star of the issue, I probably didn’t give him the focus he deserves. I’d also love to hear your thoughts about artist Natacha Bustos and colorist Vero Gandini, who are filling in for series regular Javier Rodriguez this month. Finally: did this issue leave you craving a burger, or is that just me?

Taylor: Can’t say I craved a burger after reading this issue, Spencer. But that might have more to do with me being a vegetarian than any distaste I had for the issue. So by all means, if you want to hulk-out on all of the Hulk-Cow burgers go right ahead!

With that out of the way, I can unequivocally state that I really enjoyed my first read of Spider-Woman!  I found this issue to be just dang charming and the characters all pretty lovable. Of these I think I like Porcupine the best (you are so right Spencer). He has that certain ragamuffin charm that I just can’t resist. I found this to be the case throughout the issue where his unconventional method of heroing somehow worked out for the best. I think think this balance, between competency and hopelessness, is best exemplified by this panel. 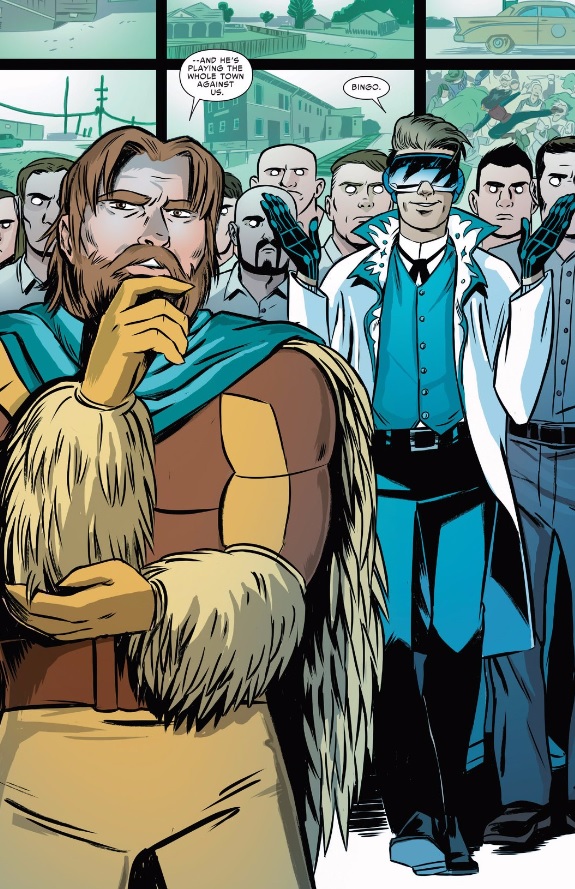 After busting into the possibly-metaphorically-named National Beef, Porcupine wonders where all the bad guys are. Of course they turn out to be behind him and of course he ends up defeating them. While that’s all fun and good, I really like Bustos’ art here. In some respects it’s hard for me to pin down what exactly draws me to this panel but I think it ends up being the look on Porcupine’s face. Just look at it! He’s trying to figure out the mystery so hard! He just…can’t, however. Bustos does a nice job of drawing our attention first to Porcupine’s face here. It’s positioned where we would normally start reading the page so it’s where our eye is drawn to naturally. After that, Bustos rewards us with fine details as our eye scans the outer limits of the page. We got our baddies decked out in cowboy chic clothing. We have zombies. We have Spider-Woman kicking butt in the background. It’s all just a lot of fun and I love how these details unfold as we scan the page.

Hopeless also made this issue fun for me. At the end of the issue, when confronted by Black Widow, Spider-Woman lets it be known just where her feelings lie in re: multiverse.

Yes, one of the reasons Jess liked being a private eye in Kansas is that she didn’t have to deal with the whole multiverse thing. This is meta-humor at its essence and I love it. On the whole I’ve had mixed feelings about Battleworld and it’s deliciously vindicating to see that same sentiment voiced by an Avenger. And this also just feels appropriate for a title that is having its run interrupted by a bureaucratic multiverse event. Ten issues in is an awkward place to have to take a break. A series can just be finding its stride after 10 issues and I can only imagine what it would feel like to have to go into hiatus right as things are coming together. So who knows, maybe Hopeless is using his own character to voice his own opinions. I hear authors do that sometimes.

I always appreciate when a superhero takes an alternative path as we’ve seen in Ant-Man and some other Marvel series so it should come as no surprise I like this title. It has a hero doing things differently and I just really like that. It’s a fun off-beat series and one I look forward to exploring in back issues and issues of the future.