Michael: Interlude: from Medieval Latin word interludium; “inter” (between) and “ludus” (play). Interludes are curious animals; they often serve as a bridge between stories in an ongoing narrative but can simultaneously be standalone anecdotes. Part prologue, part origin story, Green Arrow 44 serves as such an interlude. And like many interludes, it provides some setup for the overall plot but also exists as its own island of a story.

If you’ve been reading Green Arrow recently, then you know that writer Benjamin Percy is opting for the more hard-boiled/mythological Jeff Lemire Green Arrow instead of the CW Arrow vibe. As solicited, Green Arrow 44 gives us the backstory for Oliver’s new wolf/dog George. Oliver is on a date with a woman named Kyra who seems to have no problem that they are walking around Pike Place with a wolf on a leash. In order to get to know the impenetrable Oliver Queen a little better, Kyra wants Oliver to get his fortune told by that batty old lady who’s apparently been yelling at people on the streets for the past decade or so. Instead, the witchy woman does a little blood magic and tells us how George the wolf came to be. We are told a story of a village that was ravaged by a never-ending pack of wolves, a man who came to kill all of those wolves save one, who in turn was killed by a skeleton-masked band of warriors called The Bone Hunters. The remaining wolf mated with a huskie and thus was born George the wolf. Ollie ditches Kyra and is attacked by the very same Bone Hunters, and we are (re)introduced to Catalina Flores: Tarantula. 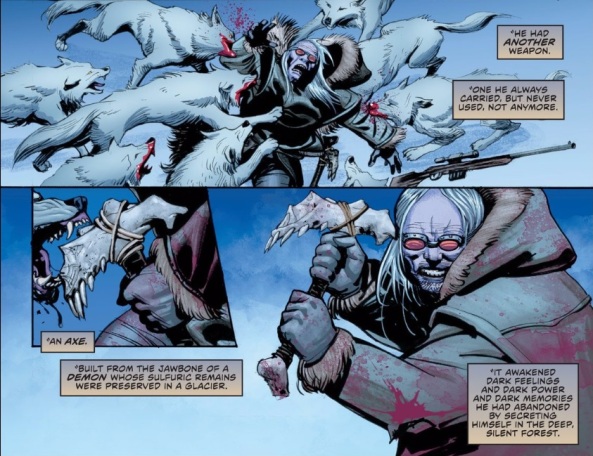 What an odd issue no? Green Arrow 44 is an Oliver-shaped hard candy with a chewy George the wolf-sized center. Percy tries to mirror George’s “outsider” nature to Oliver’s; though I’m not sure that really works. I mentioned this in my round-up for Green Arrow 43, but it’s like Percy feels like he has to muddle his ideas with clichéd superhero problems of self-righteousness. Sure, having a secret identity is gonna be hard on the love life, but that’s not really what this issue is about. What it actually is about is far more complicated and convoluted.

Going over George’s origin story as told to us by – let’s just call her “the fortune teller” — I still am not sure if what I read was a connected series of events or just a random assortment of animals, mysticism and murder. We’re told a story that is about 1) an inevitable pack of murderous warrior wolves, 2) a Native American hunter/trapper/one-man army called Old One who wields an demon jaw axe, 3) a second pack of murderous warriors – this time human and 4) a wolf/dog hybrid whose conception was somehow granted through Old One’s tears. When you list it all together it doesn’t really seem like a logical progression; there is no snowball effect, one set of extraordinary circumstances follows the one before it. Percy has described his Green Arrow as having its roots in horror, and judging by the body count in this tale it’s doing its job on that front. I’m hard pressed to link all of this blood spilling together though – what’s the through line? How does one thing beget the next? The murderous wolves seemed to just come from the ether, with no explanation besides that particular winter being deadly cold. The Old One comes on the scene because he “heard murder in their [the wolves] howling and yammering,” and uses his demon axe to cut them down. He also cuts off the paw of one of the wolves before magically restoring it…out of respect. The demon axe is arguably the reason that the Bone Hunters come a’ knockin’ – they kill Old One and George’s wolf daddy and grab the axe. Mission accomplished, right? So why do they then attack Ollie and Georgie-boy in the present day? “They want his bones,” says Tarantula. Umm…WHAT?! Because Old One’s magical tears mixed with George’s daddy’s blood? Right. Ooooooooook. I’m all for the weirdo mystical blood spilling mumbo jumbo, but I’m hoping for a better reasoning than “it’s maaaaaaaaaaagic!” 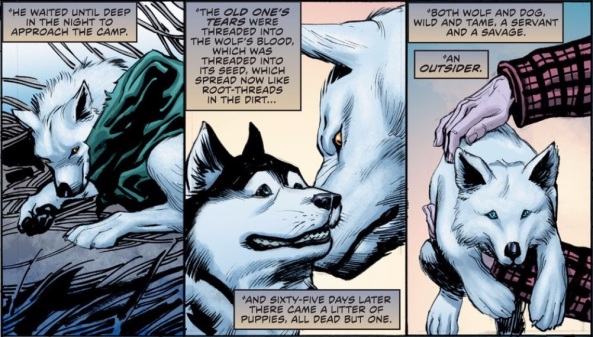 I find the fortune teller’s story easier to comprehend when looked at through the lens of mythology or religion. The “story of George’s bones” – I guess it should be called – is like a new religion that has branched out from an old one. The fortune teller says that George is “both wolf and dog, wild and tame, a servant and a savage;” the only surviving member of a litter of puppies. Myths always place the importance on the miracle birth; the half-man/half god hero. George is like some weird Messiah wolf that has been sent from above to be among the dogs but not one of them.  Except that this wolf god has been born out of violence – every act that has occurred to bring him into this world was through blood. Even the fortune teller has to shed a few drops of blood just to tell George’s damn story!

This was such a bizarre issue to read but a lot more fun writing about. Spencer! What’s your take on this strange saga? We’re you thinking of The Hand when you saw the Bone Hunters attacking Oliver from the rooftop? Also, Tarantula-ex machina!

Spencer: Tarantula’s appearance was the only moment in this issue that interested or excited me at all, which is a little pathetic when you consider that I’m not all that fond of Tarantula (she raped Nightwing, yo). Was anybody all that interested in finding out the origin story of Green Arrow’s pet wolf? Does anybody think it makes sense that Green Arrow has a pet wolf?! The Punisher adopting a coyote? Yeah, that I can buy. But Green Arrow and wolves just don’t go together.

Of course, I’m not so sure that either DC or Percy has all that strong of a handle on who Oliver Queen is or what they want to do with him. Green Arrow’s a character who’s been through a ton of barely related iterations throughout his history — he started out as Batman clone before becoming a social crusader, then Judd Winick tried to make him a ninja, then the New 52 turned him into “Steve Jobs with a bow and arrow” before Lemire’s run — but these post-Lemire arcs especially seem to be absolutely scrambling to find some direction, any direction, that will stick to this character. As far as I’m concerned, “horror” is the biggest stretch yet; when I opened Green Arrow 44, the last thing I expected to see were mythical wolf messiahs, demon-jaw axes, and blood magic. It’s hard to pin down just what exactly a Green Arrow story should feel like, but this certainly isn’t it.

That said, Lemire’s quasi-mystical mythology for his Green Arrow run was a bit of a stretch as well, but he managed to make it work by positioning Ollie as a central part of that mythology, and then basing his stories as much in Ollie’s reactions to the Outsiders as the Outsiders themselves. As Michael has already pointed out, Ollie plays no part in George the Wolf’s story — he’s an incidental character in his own book, and what few moments Percy does get to spend exploring Ollie don’t impress. The Oliver Queen of Green Arrow 44 is a complete prick. 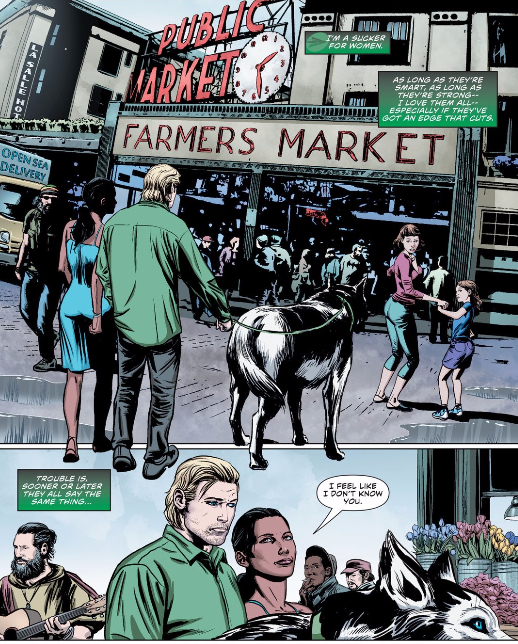 Okay, first of all, the narration here absolutely drives me up a wall. “As long as they’re smart, as long as they’re strong — I love them all — especially if they’ve got an edge that cuts.” Why is “I love them all” isolated like that? It’s saying that Ollie loves all the smart, strong women? He loves all those qualities (and more!)? If you ignore the brackets, it’s saying that he loves all women, but only if they’re smart and strong — what?! This reads like gobbedlygook, or like something out of one of Charlie Sheen’s dream journals.

Then we get to the actual content — Ollie talking about how much he loves women but complaining about them wanting to know him. Admittedly, there’s the whole “secret identity” deal mucking things up (at least, I think so — does Ollie still have a secret identity? His shirt straight-up has a green arrow on it), but it still reads as gross. Kyra’s characterization never extends beyond her being a nag — her every line revolves around her pestering Ollie about his past, while she doesn’t even bat an eyelid at the supernatural events surrounding her — and at one point Ollie practically compares her wanting to learn more about him to her sucking the marrow out of his bones. 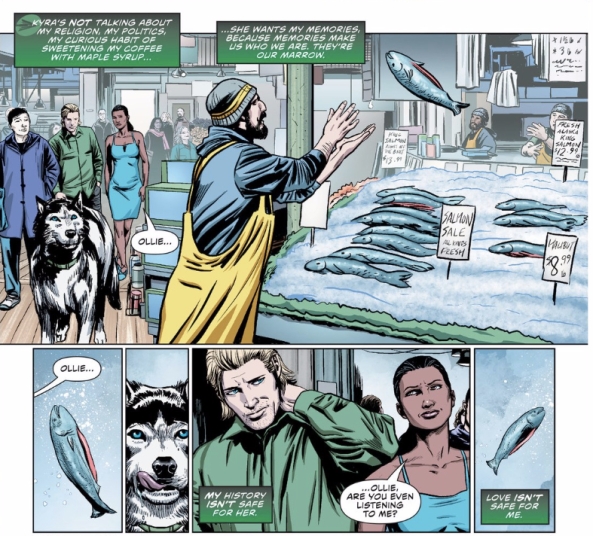 Gross. Seriously Ollie, if love isn’t safe for you, why do you keep dating? I’m cool with no frills attached hook-ups, but if that’s what you’re after, let the girls know — don’t enter a relationship knowing that they’re going to want to learn about you and then resenting them for it! That’s seriously screwed up! Ollie’s always been a bit of a lunk around women, but he’s also always been charming enough to make up for it — this Ollie, though, is just a self-involved cold fish with pretty much no redeeming characteristics. I’m not saying that all characters have to be likable, and awful characters actually have the most room to grow, but Percy’s given me no reason to care about Ollie’s growth at all, or to even think that this Ollie is capable of it. I think Ollie is supposed to read as a flawed hero trapped in a self-destructive cycle, but in actuality he just comes across as poorly written and whiny — and we’re talking Anakin Skywalker levels of whiny here. Seriously, Oliver Queen, as presented in this issue, is an absolute dick.

Then there’s the actual meat of the issue, George’s backstory. Michael’s already done an excellent job of dissecting this tale’s many structural and thematic problems, so I’m instead just gonna gripe about how absolutely, phenomenally boring it is. Interlude or not, this issue is kicking off an arc, and I cannot think of a less interesting way to do that than with a full-issue plot recap, complete with painstakingly detailed and antiquated narration. Is there any reason we need to know so much detail about George’s past? Is there any reason we need to find out about it now? Wouldn’t it be more interesting to introduce the Bone Hunters first and then discover why they attacked? Percy’s robbed his own story of any sense of mystery it could’ve had, and that’s a crying shame.

Oh well; at least it looks nice. Patrick Zircher and Fabrizio Fidrentino do a fine job on art; they perfectly capture the dark, moody tone Percy’s aiming for (for better or for worse), create some clear, dynamic action sequences and some rather attractive characters, and best of all, they’ve got bombast down to an art. Honestly, if this panel doesn’t get your heart pumping fast, you’re dead. 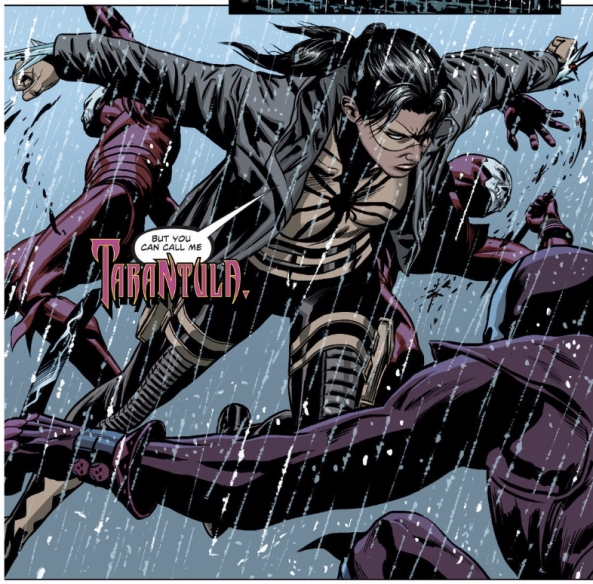 If only Zircher and Fidrentino had better material to work with, this issue could have been something — or, at least, something more than the mess it turned out as. For now, I’m very happy to ignore this title entirely until the next creative team and their inevitable new direction comes around.