Ryan: Canada and America at war. Total war. At first glance, this seems highly unlikely, almost unimaginable. But at issue three of a six-part miniseries, We Stand on Guard is far past first glance. Brian K. Vaughn and Steve Skroce keep pulling back the curtains, and every reveal in this issue fits perfectly into the universe created. The real hook, aside from the soaring tension and slick action, is that the fiction is not incredibly far from the truth.

The scrappy, rag-tag resistance group, the Two-Four (named after what our Canadian counterparts call a 24 pack of beer, I learned from the letters section), is on the ropes. The victory of capturing an American guerilla war-walker is short-lived as Yankee scouts capture Vic McFadden, leader of our group. Now, decisions must be made, as the squad’s secret base may be compromised, losing everything they have scraped and clawed to accrue. The creative team imbues the Two-Four with wonderful squad dynamics, featuring passionate, hard-headed individuals forced into a pressure-cooker. The decision to stay and fight vs. leave and rebuild also carries a serious gravity to it due to the fact these Canucks very much feel like the last, best line of defense against the inexorable march of the American war machine.

As technologically advanced and imposing as the American forces appear, it’s the dreadful feeling of familiarity which frightens me the most. With the recent publication of the CIA’s report on torture detailing the “advanced interrogation” techniques used against suspected terrorists, including the notorious methods of waterboarding and as-bad-as-it-sounds rectal rehydration, the means through which the US achieves its valued military intelligence have been a hot-button issue as of late. This issue’s cover and a vast majority of its pages show the process of McFadden’s torture at the hands of the unnamed, short haired woman who appears to be calling a lot of the shots for the American war effort (more on her in a sec). Though this torture may be now administered via virtual reality, the rounds of witch-hunt style torment inflicted upon the detainee are cringe-inducing and brutal. But this pales in comparison to the piece de resitance, one of the most horrifying pages I have ever read, and hell, I even read Alan Moore’s The Lost Girls: 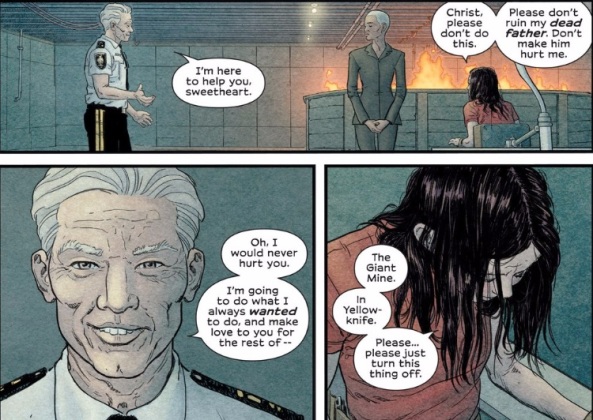 I do not think anyone would blame Vic for folding immediately in this situation. This page punched me in the gut. Vic’s reactions were understated and pitch-perfect, and though Skroce gets most of his acclaim for his vivid action scenes, his nuances in facial expressions and posture here turn BKV’s terrible concept into a breathing reality- especially the powerful choice to not show Vic’s face as she reveals the location of her comrades’ base. Though the real-world efficacy of torture is still widely debated by experts, the use of it here as a plot device, heightening the tension of the book as a whole and revealing more about the characters, is done quite masterfully.

The enlisted medical staff on hand, whose sleeve bears the patch of the caduceus of the Army Medical Corps as opposed to the Rod of Asclepius of many other branches, objects to the use of such enhanced interrogation, but is swiftly talked down by the mysterious woman in charge. Thus far, we have no name for this figure- she’s only been referred to as “Ma’am”- and she bears no ranking insignias, stars, or other demarcations, simply a small pin of the United States’ flag. This woman, sent to the front lines by the administrations to provide “adult supervision”, gives orders to a Colonel, the fifth highest rank possible in the military. She is, by far, the most interesting character in this series, written as ruthless and driven, yet still genuine and human.

I want to hate her, but I just can’t. She clearly has her own strict code, but does not let them interfere with getting her job done by any means necessary, even if it means violatingrules of customary international humanitarian law . Also, her dialogue with McFadden casts some small doubt on the “false flag” theory for America’s aggression popular amongst the Canadians in the story and many readers who commented on WSoG 1. Does this woman truly believe that the Americans are retaliating justly against Canada’s violent extremism, or is this all part of her act?

Whatever the true cause of the war- and knowing BKV, there is a real chance that we never find out- the Americans did indeed implement War Plan Red, the combat scenario mentioned in the flashback of Amber and her brother taking place three years after the 2112 catalytic events. A quick search online shows that the creative team were not making this up one bit, as that plan was officially declassified in 1978. Interestingly enough, the Canucks had their own war plan against the US cooking during the 1920’s called Defence Scheme No. 1, which involved air column attacks on cities such as Seattle, Minneapolis, and Albany to divert American forces until help arrived from Canada’s Imperial allies. This begs the question playing into my one large curiosity of this series: what is happening on a global scale during this conflict? Where are the British or the French? I must not be the only one who would love to see how the world reacts to such a politically-charged conflict.

Taylor, the probability is that you find this book to be as impossibly entertaining as I do. What strikes you most about this series as it hits its half-way point? Any thoughts on the pointed remarks about climate change slung towards America? Are you worried about the fate of the Two-Four?

Taylor: Oh I think the Two-Four will be alright for the time being. They may not all make it through the coming battle but they’re a tenacious group and I think it would be hard to ever truly destroy them.

Ryan, I have to admit I’m not as thoroughly entertained by this title as you are. For whatever reason it just seems to kind of fall short of something special. I’m not sure what to chalk that up to but I do have a few ideas. The first of these centers on what surely is the main talking point of this issue for fans and critics: Vic’s torture. The idea of being raped by her father is truly horrible. However, I feel like this is a simply just shock-value thrown out here by Vaughan. For a writer that has demonstrated how smart he is, it’s oddly disappointing to see him write something like this. Here we have the makings of something really interesting: a device that allows people to torture others psychologically in ways that are worse then anything physical they could endure. That being said, the form of torture that breaks Vic could literally be anything. Instead it becomes something so nasty and horrible that it seems to lack any real forethought.

The issue of why this whole war is happening in the first place similarly is tantalizing, but up to this point somewhat hollow for me. I totally dig the idea of America becoming a dust bowl and invading Canada for its water. I’m a sucker for environmental messages that way. I also love how this gives Vic a moral edge to her hatred of the Americans. If they fucked up the planet by ignoring climate change, maybe they are worthy of insult. 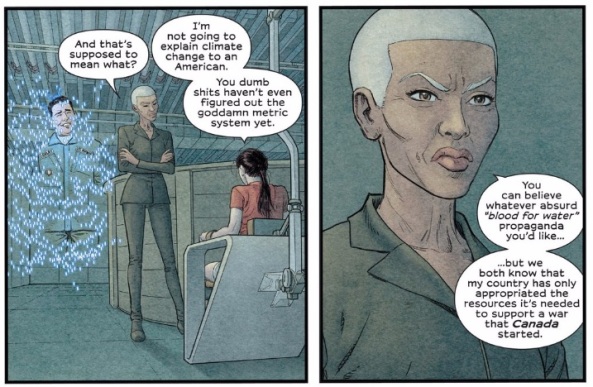 But I feel like something just doesn’t add up here. Vic says the war is about resources. Our mysterious interrogator says it’s about retaliation. In either case the need for war seems a bit extreme. While that certainly makes the American’s seem evil, it doesn’t explain just why they’re so ruthless. I like the idea you mentioned Ryan of this issue holding the mirror up to America’s use of torture, but that’s just one aspect of the issue. I guess what I mean to get at is this: with this series halfway home, I would expect this issue to raise the stakes some or let us peek behind the curtain to see what’s really going. I suppose it’s unfair to compare an issue to what it could be, but I guess that’s essentially of us critics.

I don’t want to leave everyone thinking I didn’t enjoy this issue. There’s a lot here to appreciate and I for one have really enjoyed Steve Skroce’s art. While you like his ability to express emotion, Ryan, I appreciate his ability to depict near-future technology. We get a couple of page long panels showing us scenes of the the future tech employed by the American’s and Canucks. My favorite in this issue is this one: 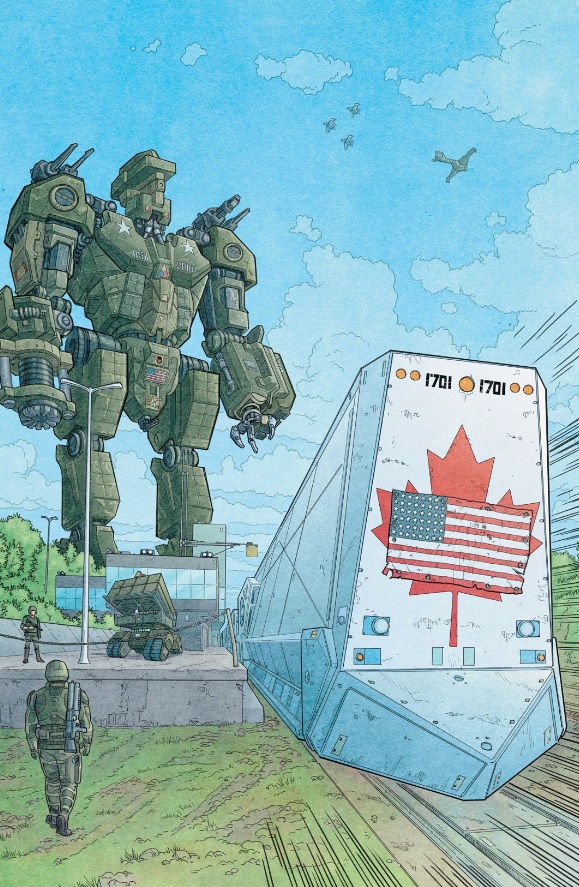 I’ve always been a fan of pictures (real or drawn) that show complex machinery. Think of any DK Publishing book out there. While things aren’t labled here, I love how Skroce paints pictures of tech that aren’t, but could be. There’s enough detail her to keep you looking and guessing just what each panel, hatch, and rotor is used for and that’s just a fun game to play in any future world. The detail of the American flag plastered to the front of the train is a nice touch. This is war damn it, we don’t have time to paint flags! It’s also a wonderful visual metaphor of America’s annexation of Canada. This is just a really interesting panel all around.

Ultimately I think my viewpoint of this issue will be based on how this series ends up as a whole. That’s a heavy burden for an issue to carry and I recognize it’s unfair in some ways. However, I would rather have a title that aimed for the stars and falls short rather than one that never even tried to get there in the first place. Just which category this issue falls into is perhaps simply a matter of interpretation.