Michael: While Scott Snyder’s current Batman run could fit into the mold of “written for trade paperback collections,” he also likes his standalone issues. Batman 44 takes a reprieve from Jim Gordon’s inaugural Batman arc, “Superheavy,” to tell an all-too-real story about a murdered black teenager. Taking place shortly after Zero Year, the relatively new Batman does some detective work to find out a little more about this murdered teen: Peter Duggio. He discovers that Peter was mixed up with The Penguin, the Four Fives gang and a mysterious man (who readers know to be Mr. Bloom) who gave him some temporary super powers. When his powers ran out (Man-bat wings), Peter fell to his death. But before that he was shot four times by a police officer.

There are plenty of fine superhero books on the shelves written by men and women who want nothing more than to entertain you with your favorite caped-heroes – and this is 100% acceptable. But the truly talented comic scribes are those that have the gift to elevate the genre and leave the reader with a message that is powerful and poignant. Scott Snyder is one of those writers; and the fact that he is joined by Brian Azzarello makes Batman 44 even more of a success. I was intrigued by what this issue held in store because the solicitation promised us “the origin of new villain Mr. Bloom!” While Mr. Bloom definitely plays a big role in the events of Batman 44, this description is very inaccurate. Though I can’t imagine DC editorial/marketing being able to punch up “black teenager is forgotten by the system, tries to maintain a grip on what little he has and is gunned down by a police officer.” Solicitations are kinda really stupid anyways.

The script feels equal parts Snyder and Azzarello. It has the historical foundations that Snyder loves to paint Gotham with (since this is shortly after Zero Year); and Azzarello’s hard, true crime drama style delivered to us removed from an omniscient narrator. It’s like Frank Miller’s Batman without the gratuitous hard-assery. Even though this issue has a mysterious man giving kids superpowers, the book reads like a well-crafted crime story that follows the breadcrumbs to all sorts of places like a show like The Wire did. I think it’s been a while since I’ve been genuinely impressed by a Batman detective story – I find that most take sharp left turns and plot twists for shock-value’s sake. Following Batman as he pieced together the puzzle, Snyder and Azzarello painted a picture of Peter and the ill-fated chain of events that led him to that beach where his body was found. When he finds Peter’s body, Batman is blind with rage, ready to find the people responsible for this crime. What he learns throughout the investigation is that multiple parties are culpable, including himself. In his attempt to rebuild Gotham, Bruce Wayne inadvertently doomed the Duggio family and the corner store they owned.

The concept of Bruce Wayne/Batman’s attempts to save Gotham unintentionally hurting the city is not a new idea. But it comes as quite the sucker punch when Batman is out for blood and he finds himself almost equally responsible for the wrong he’s trying to right. Guest-artist Jock employs a the visual device of newspaper excerpts that support the narration and give context for the socio-economic status of the African American community in Gotham. These brief excerpts detail so much, including corrupt city officials, lingering effects from segregated America, gang uprisings, rates of black homicides at the hands of police and lastly questioning the necessity of Bruce Wayne’s city-wide relief efforts. Easily the best visual of the book is a black and white spread of Batman overlooking Gotham, with all of these previous newspaper excerpts sprawled across the city-scape, going in every direction. A sliver of a panel adjoins the top of the spread, with the ironic narration that this was “in the end, a simple case” – when of course it was anything but. 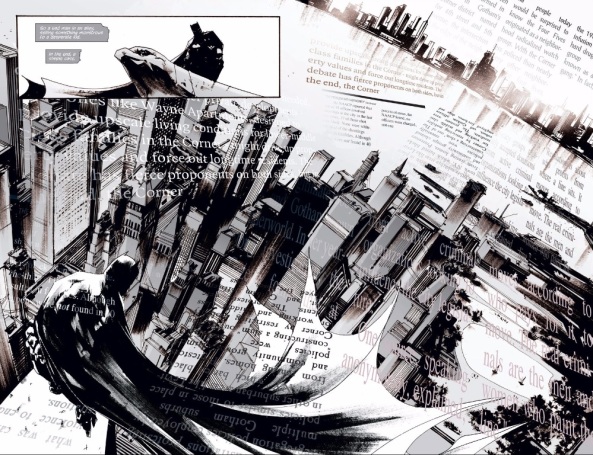 There’s still too much to talk about but I wanted to note how the creators did something I don’t think I’ve ever seen before: Batman using his cape as a weapon – more specifically, a bludgeon. If we are basing the logic of Batman’s cape off of Christopher Nolan’s “memory cloth” technology it makes complete sense that Batman could shape it in such a way. That was hella cool.

I think my first snap reaction of Batman 44 was “Oh shit. Snyder and Azzarello are entering the ring on the topic of cops killing black males: #BlackLivesMatter” (probably partially due to the fact that I wrote a lot of about it earlier this week.) Batman 44 IS about cops killing black males but just like that particular conversation, it’s a problem that is more layered and goes much deeper than that. The different newspaper excerpts provided are evidence compiled to address the issue of how African Americans are ignored from the top-down. And in true Snyder bricklaying fashion, we take a near-detour to how crime in Gotham has been directly affected by that institutionalized neglect. And as much as Batman is a symbol for justice, to the public, Bruce Wayne is a symbol of the white patriarchy. We know Bruce’s actual intentions of course, but to people like Peter Duggio, Bruce Wayne might as well be Donald Trump. The Oliver Queen of old would most certainly call him a “fat cat.”

Speaking of, I think that this issue is right up there with the important “PSA issues” of old. Bruce realizing that he might need to narrow his focus on Gotham’s forgotten is as essential as Green Arrow realizing that his lack of attention and care led to Speedy turning to heroin – both require a personal touch. The end of the issue sees an inversion on a prior scene, where instead of trying to scare kids out of their current situation; he tries to talk to them. It’s a scene that might come off as corny to some, but don’t forget that despite his loner persona Batman is a leader. He’s probably raised enough kids to open up a foster home after all. 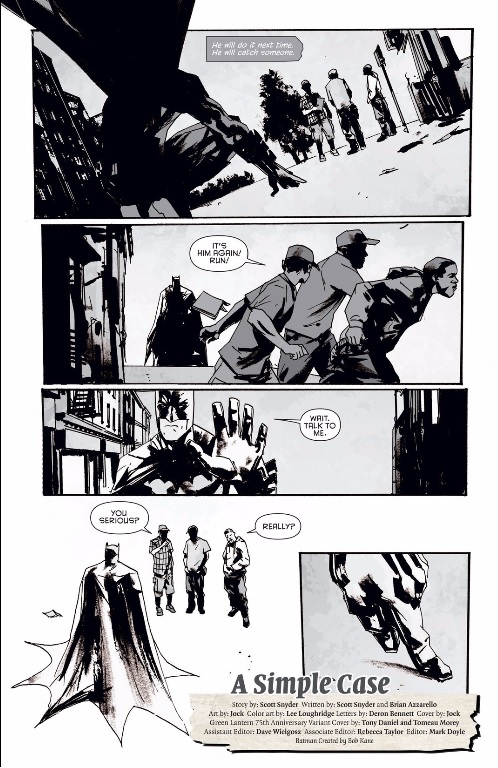 Patrick, I wrote SO much. I’m sorry. I have other thoughts that I’ll throw in the comments, so instead of prompting you I just invite you to give me whatever you’ve got!

Patrick: Invitation accepted! I think one of the biggest strengths of this issue is Snyder and Azzarello’s ability to tell a story that is at once totally grounded and totally fantastical. The details peppered throughout this thing are absolutely astounding, and the line between what’s real and what feels real is almost totally obliterated. My favorite example of this is Penguin’s test whereby he gives new business associates a rare bird and makes them care for it – if the bird dies, the deal is off. We get to see one of those poor birds in Peter’s burned out store and it serves as a potent image for people with money and power taking advantage of disenfranchised people who have no other options. 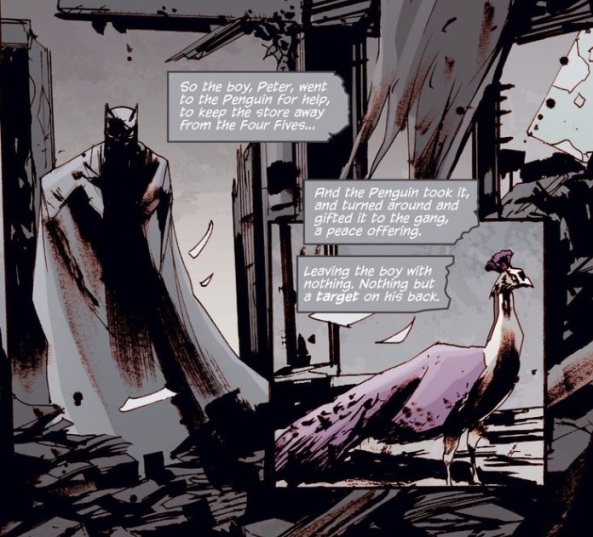 A peacock doesn’t belong in this environment any more than The Penguin. The narration in this issue is careful to point out that Cobblepot has sort of become a new kind gangster – one that makes dealings with street-level gangs. I’m sure that was all part of the reality of the organized crime that inspired Gotham’s villains in the first place, but the collective consensus seems to be that those gangs are composed entirely of Italian guys in suits. That’s a gangster fantasy that we’re all-to-happy to entertain – like Michael mentioned, that’s the stuff of fun, pulpy Batman stories. Making Cobblepot “a modern gangster” gives Batman a villain genuinely worth fighting.

Of course, that’s not the point. Snyder and Azzarello go on a long journey to tell us that the city is simultaneously its own oppressor and its own victim. Maybe the reason that ending comes off as kind of cheesy is because Batman’s the wrong tool for real systematic failure. The final panel in the issue — which Michael posted above — shows Batman touching his fingers to the street, which recalls a story that the narrator tells about young Bruce Wayne.

There was a game Bruce used to play as a boy. We’d heard anecdotes about how the Miagani Indians put their fingers to the ground to “listen” for coming changes in the land. Bruce would put his fingers to the tracks by his house. “Listening” for some message from Gotham City, trying to hear all it had to tell him.

Batman “listening” to the city is meant to be redemptive, making up for his failure to listen to Peter when he was approached about building Wayne Apartments. But you have to wonder whether that’s enough. After all, a kid died, and Bruce Wayne is at least partially culpable. That’s a powerful position to put Batman in – we’re not used to seeing the character be wrong. But that is the situation he’s in – he’s just as big a part of this broken system as anyone else.

I do wonder about how easily the issue seems to let Howler off the hook. Batman may have a hard nose toward corrupt cops, but he’s oddly understanding of a cop that shot a kid four times. He’ll throw the Penguin in a bird cage, but Howler gets to go home? The narration is quick to abstract Howler’s actions, sadly addressing the shooting more as a trend than as an individual action that requires that an individual be held accountable. And ultimately, Peter doesn’t die from those gun wounds, but from the fall, almost absolving his shooter of the responsibility for Peter’s death. That makes Howler a footnote in this story about systematic failure. The question I’d like to ask is whether that works in the context of this story. Isn’t that subject too big to not be the central concern in a story that features it? The message of the issue demands that there be no single “bad guy,” so why do we have what is so clearly a bad guy?

In any event, I wanted to bring up one more thing before we turn this over to the comments. The history of Gotham contains the Zero Year, to which the narrator and Jim Gordon all seem to attribute the city’s current failings. Pointedly, Peter acquires the Man-Bat-Venom-Serum from Mr. Bloom in Blossom Row, an alley that has not be rehabilitated after the events of Zero Year. On this page, colorist Lee Loughridge invokes FCO Plascencia’s bright color palette from Year One – it’s the only green we see in the whole issue (unless you want to count the Green Lantern 75th anniversary variant color, which totally ruins that particular magic trick). 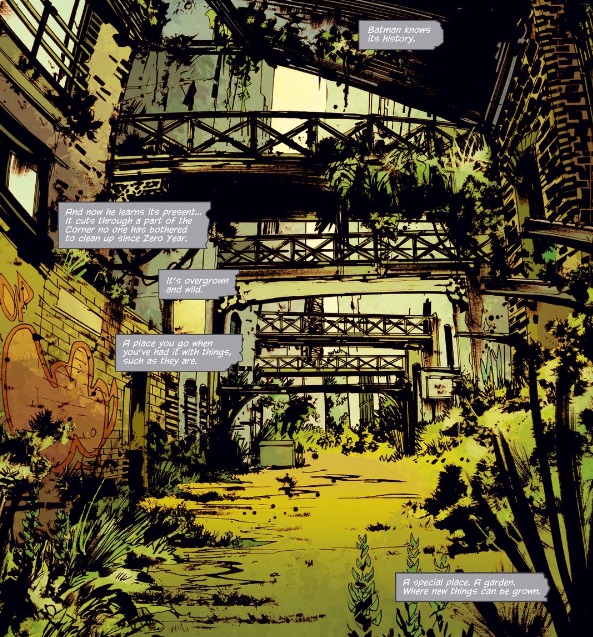 This may end up just being one of the more superhero-y details in this story. Like the gift of a rare bird, Blossom Row fleshes out this world without demanding real-world detail. But I wonder if there’s some real-world analogue to Zero Year, some incident that we could point to as the source of all out institutional failings. Maybe it’s simply representative of every ugly part of our history. Maybe the 60s? Maybe or specifically Vietnam (which would be right in Azzarello’s wheelhouse)? I’d love to read theories in the comments.