Today, Drew and Patrick are discussing E is for Extinction 4, originally released September 30th, 2015. This issue is a Secret Wars tie-in. For more Secret Wars coverage from the week, check out our Secret Wars Round-Up!

Drew: Do you ever hate movies for ruining a good premise? Like, not just for failing to live up to the potential they had, but for poisoning that premise for anyone else. You might have an interesting story where plants conspire to wipe out humanity, but the only thing anyone will see when they look at it is The Happening. A similar phenomenon can happen with smaller details, from memorable character names to meet-cutes to death scenes, that, for one reason or another, are so strongly associated with a crummy piece of art that it’s difficult to repeat. X-Men: The Last Stand is one such piece of crummy art, yet E is for Extinction 4 aims to reclaim many of the moments it had soiled. That’s an unexpected windmill to tilt at, but the more surprising fact is that the issue largely succeeds in winning those moments back.

The first moment — and the one that forced me to consider The Last Stand in the first place — is the unceremonious death of Scott Summers at the hands of the Phoenix. In the movie, it’s a laughably unmotivated turn, used to illustrate that the Phoenix is evil for evil’s sake. Perhaps more importantly, it’s directed in a way that robs Scott’s fate of any impact — the scene ends with the audience wondering if they just saw Cyclops die, with the confirmation coming about ten minutes later as a kind of noncommittal shrug. Here, the motivation is laid out as cleanly as possible ahead of time, with Charles and Cassandra’s battle over Jean’s soul stepping into its place as the thematic centerpiece of this series. Moreover, Scott’s death (and how we should react to it) is laid out immediately, and in no uncertain terms.

It’s strange to praise a scene for simply giving us a reverse shot, but it goes to show how profoundly botched the analogous moment was in The Last Stand. It turns out, it really doesn’t take much to make actions and reactions clear.

Perhaps the more challenging moment to take back was Logan’s mercy-killing of Jean. Their relationship was one of the better developed ones in the movies, and even the entirety of The Last Stand couldn’t erase that, giving their final moment together some real (if borrowed) emotional ballast. Here, writers Chris Burnham and Dennis Culver double-down on that emotional weight. Logan’s constant refrain of “Aw, Jeanie…” reminds us of his affection for her. But of course, this isn’t just Logan who delivers the killing blow — it’s also Professor X. Logan is able to get through to Jean, while Xavier handles Cassandra. It’s a dense moment, but artist Ramon Villalobos is able to emphasize both the tenderness and the violence. 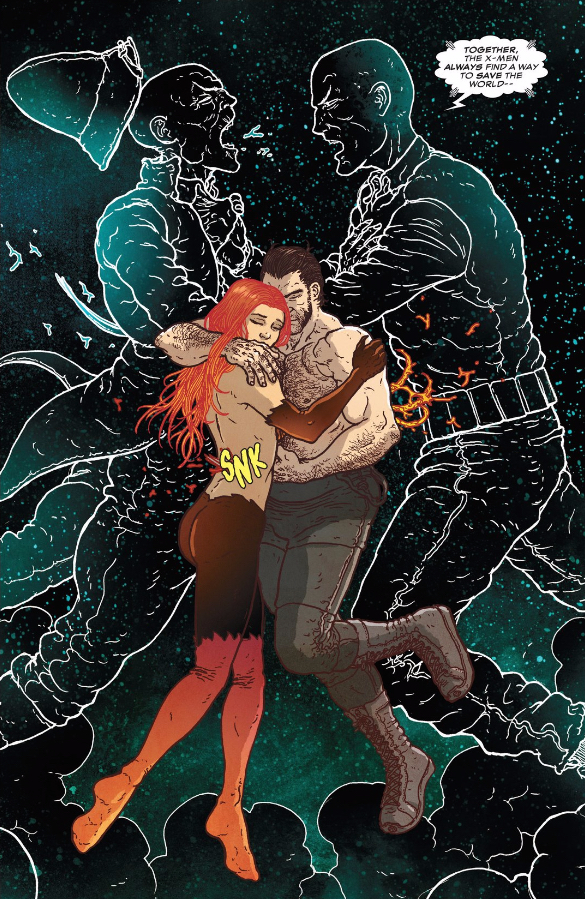 It’s a moment that’s much more powerful — and memorable — than anything The Last Stand can conjure. There’s a delicacy here that few comics can hope to achieve (though, like The Last Stand, that may rely more on Logan and Jean’s relationship as told in other stories than anything we see here).

But I’m left wondering why this creative team chose these moments at all. Was it a coincidence that this conclusion so strongly resembles that of The Last Stand? I’m inclined to think it must be more than that, but I can’t put my finger on what reason they would have for hearkening back to that movie. Was this just an exercise in turning the bad into the good, or are we meant to glean anything from our own associations with the movie? It’s certainly amusing to see those familiar beats given beauty and meaning, but I’m struggling to find a purpose beyond that amusement.

Patrick! Are you faring any better on that front? After paying so much homage to Grant Morrison’s lauded New X-Men, it’s odd to turn around and reference the most maligned X-Men movie. Are the parallels not as strong as I think they are, or is there something going on here?

Patrick: Y’know, while I was reminded of the Wolverine-mercy-killing-Jean scene from The Last Stand, I had a slightly different reaction to it than you, Drew. I don’t believe that the image of a weeping Logan plunging his claws into the Phoenix’s stomach belongs solely to that movie, but that it was merely co-opted by the the film. And I don’t even mean that in a literal way, but in the hearts and minds of X-Men fans, this is a powerful moment. So: are Burnham, Culver and Villalobos trying to reclaim the moment out of a sense of righting some cosmic wrong? Or, are they simply tapping into to the great emotional shorthand that the X-Men lexicon offers?

I’d argue for the latter. The issue starts out borrowing two rather strong images – the first being light and dark fetuses (Charles and Cassandra) creating a yin-yang with their tiny bodies, and the second being a Xavier sibling with a gun to their own head. They’re both startlingly effective images, but the second one harkens directly back to the full-page splash of Xavier blowing his brains out in the first issue of this series – itself a reference to Morrison’s run with the X-Men. It makes me wish I was both a better Morrison-scholar and a better X-Men scholar, because that first panel is so fucking loaded, I feel like it also has to be borrowed.

Even the balance of the white narration box against the black narration box reinforces this balance between good and evil. Also, I hadn’t really thought about it until I posted this panel just now, but the fetuses sorta look like Beak and his kids. I don’t exactly know what to make of that, but I think any visual connection makes the image even stronger.

After all, it’s hard to say where most of the conflict in this issue takes place, right? There is certainly a physical space that all the Beasts and Jean and Wolverine and everyone exists in, but the real battle takes place in the minds of Cassandra Nova and Professor X. Any real strength either one of them has is their ability to leverage powerful ideas against each other. Notice that it’s not just Burnham, Culver and Villalobos who are making the choice to cash in the emotion chips from Wolverine killing Jean, but Charles and Wolverine make the same decision for the same reason.

They’re willfully being emotionally manipulative. And that’s how they win. That’s a powerful statement about storytellers and where the successes and failures of something like Secret Wars lies. You could argue that the whole point of any of these mini-series is to remix the characters and concepts that have already proven themselves to be effective, and make the readers feel those same feelings again. Which actually leads me to the kind-of-depressing moral of the story: the battle of ideas can only be won by using the tricks that we already know work.

Or, I’m a big dummy and the whole series was just about getting Jean to actually speak the word “SNIKT” – in which case, E is for Extinction is a rousing, joyful success.