Taylor: They say that time heals all wounds. Everyone knows that this saying has both a literal and metaphorical meaning. For only time can take the sting away from hurt feelings and only time can mend a broken body. However, time also causes things to fester and decay. Eventually, time kills or destroys all. While the truth of these statements can’t be denied, I think whether a person views time as a destroyer or a healer says a lot about their viewpoint on the world. In Teenage Mutant Ninja Turtles 50, a clash of these two viewpoints takes place, and the head-to-head encounter leaves one dead and the other walking into new territory. The result is an issue focused on the past, the future, and the passage of time.

The turtles and Splinter are face off in a grudge match against Shredder and his cronies in an arena-style battle to end all battles. The turtles prevail, naturally, thanks to the help of newly revived Donatello. Then the turtles take on Shredder while Splinter meditates and they are soundly defeated. With everything on the line, Splinter defeats his one-time friend and becomes the new leader of the Foot Clan.

This is the 50th issue of TMNT and as such it’s double sized and chalked full of action. Yet even though a lot of ninja action goes down in this issue, it frequently dips into the past and examines the past lives of Oroku Saki and Hamato Yoshi. Through these flashbacks I came to better to understand both of these characters and what drives their fatal feud. This feud, which has lasted centuries, has consumed both Saki and Yoshi but in extremely different ways.

For Saki, time has caused his hatred for Yoshi and his sons to fester and become something both vile and evil. This all-consuming hatred has fed into his lust for power and as is the case in this issue, it is his undoing. But it wasn’t always like this. Saki and Yoshi used to be good friends who dreamed of becoming great warriors, together.

From after this point in the forest, the paths of Saki and Yoshi diverged. Saki wanted nothing more than to prove his strength and, in doing so, often overstepped his bounds. Saki became obsessed with the notion of crushing all those who opposed the Foot Clan. In time, this came to include Yoshi and his family. Even after centuries apart, Saki let his lust for power drive him to near madness. In this way, time only added fuel to Saki’s fire and by the time the events in this issue go down, he’s far beyond the point of saving.

Yoshi, on the other hand, has used his time on Earth (and the ethereal plane it seems) to meditate on how time can heal. After his fun in the forest with Saki, Yoshi takes a path where he uses time to mend his wounds and make his life better. This ultimately proves his saving grace in the confrontation with Saki and surely informs his decision to end Saki’s life. But that doesn’t mean the choice was easy for Splinter. He’s obviously saddened at these events and it can only be assumed time will be needed to heal his wounds.

While the writers (Kevin Eastman, Bobby Curnow, and Tom Watlz) consider time in narrative form, artist Mateus Santolouco considers it in visual form. Throughout the issue, Santolouco masterfully animates action that seems to leap off the page. Dare I say it’s almost like he knows exactly how to capture a moment in time? But what really impressed me this issue (and indeed it’s something different each issue he draws) it was this two page spread. 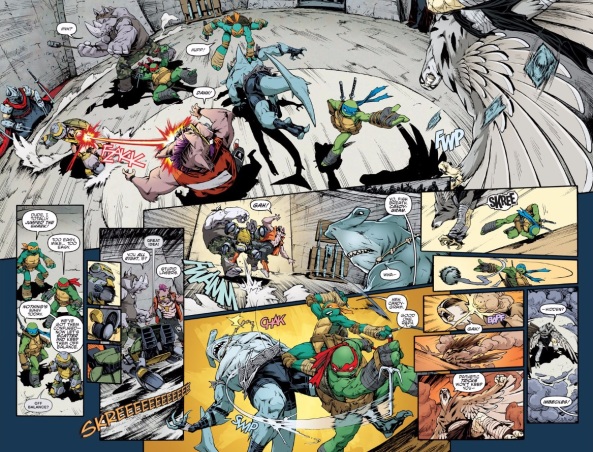 The layout of this page is nothing short of ridiculous. It teeters on the edge of making sense but like a master of suspense, the page pulls it off just when we least think it will be able to do so. This tension is created by the unique paneling Santolouco employs here. The flow I take when reading this page is simply all over the place. First across, then down, then over, then across again, then down, then over again, down once more and finally one last move to the right. The path my eyes take to take this page in is totally unique and unlike anything I’ve really read before. It both isolates different parts of this scene but manages to show it all as happening at the time and roughly the same place. All the while it seems like the layout shouldn’t make sense, that it should fall apart just because there’s so much happening on one page. But this collapse never happens and the fever pitch of this action is just drawn higher and higher because of it.

Patrick, this issue really lives up to being a landmark 50th issue – there’s just so much to take in. Like I said, Santolouco’s pen is on fire throughout the issue. Do you have a favorite scene or five? What do you make of Splinter being head of the Foot Clan and Michelangelo’s oddly abrupt exit?

Patrick: Oh man – that page you highlighted is definitely one of those Santolouco masterworks. He will frequently use a fisheye lens in order to show us a lot of action happening in a small space, but he actually uses that shape to guide the concentric circles your eyes travel in while reading the page. Notice how he keeps that rounded shape on the bottom of the spread and how the center of the page includes Robo-Donny’s bullseye. It really is stupendously staged – which is really something I could say about every single beat of the action in this issue.

And those beats come relentlessly — almost exhaustingly — as our heroes battle foes that just refuse to go down. I love the idea that Bebop and Rocksteady are juggernauts, more unstoppable forces of nature than actual people. Michelangelo describes them as having “a hole lot of stuffin'” which actually goes a long way toward making the pair sound like they’re defeatible in the first place. Both Santoluoco and artist Corey Smith alternate between drawing these characters as honest menaces and as big dumb problems to be solved. They can’t be beaten with a bunch of ninja punches, so taking them out is more like solving a puzzle. Mind you, it’s a puzzle with a solution that requires ninja-level acrobatics, but a puzzle nonetheless. I love seeing Mikey and Raph working on the solution together, which Santoluoco presents with such an awesome visual unity.

The first thing you notice here is that Santoluoco shows this sequence of events totally without panel dividers. He’s minimizing visual distractions, and there’s just no room for the artifice of comics in this fight: just drawings of the character’s fighting each other. There’s also no real background to speak of, just that lighter blue rectangle and the shadows of the combatants on the floor. Again, we don’t really need any additional distractions here – the information that we need to take in is the only information Santoluoco presents us with. Colorist Rhonda Pattison also chips in by simplifying the colors. In stead of filling the page with grays and greens and purples and all that complicated noise, she employs a gradual fade from yellow to orange, which implies increasing intensity as our eyes move right across the page (and also doubles as the colors of the masks of the turtles in this scuffle). I also love the detail of the light blue box in the background, which obviously doesn’t represent an object physically in the scene, rather it insists on a continuity of scale. If one common shape spans all three panels, then we have to assume that everything within those panels is also the same size. That might sound obvious – but all of these visual cues work together to convince the eye that everything happening here is immediate and grounded, taking up space and time in a realistic and consistent way. Plus, check out how you can follow the little stories told by the movements of individual limbs. Look how Raph bates Bebop to step on Rocksteady’s foot! That’s just one tiny piece of this thing!

And of course, that fight is just one tiny piece of a bigger fight, which in turn is just a tiny piece of a greater story unfolding in this issue. So much of Splinter’s journey in this issue is about him being aware of himself and of the world around him. By the time he takes action against Shredder, he is totally in tune with all of his strengths and all of his weaknesses. It’s that same kind of hyper awareness that Santoluoco expresses time and time again with these expertly staged fight scenes. Think about how chaotic a four-on-four mutant-ninja fight should be and then compare that to Santoluoco’s balletic offering. It’s like we’re seeing the fight from Splinter’s perspective — and that means clarity.

God, the art in this issue is just so fucking good. Santoluoco also has a masterful eye for cinematic storytelling, as evidenced by this two-page splash establishing the moon-bathed rooftops where the final battle takes place. 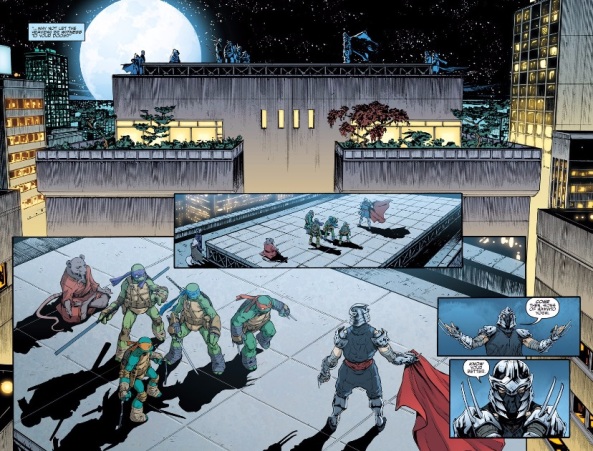 The widescreen shape of those three panels goes a long way toward making this feel like it’s the final fight in a blockbuster action movie, but also check out that perspective. The camera draws closer while spiraling upward, looking down on our characters, like some kind of insane crane shot. The best though, might be Shredder’s two little insert panels, which reverse all of those cool moves (a low angle instead of a high one, a narrowing of panels, a straight zoom instead of one tracking around in a circle). Even the existence of those panels imposes a kind of lopsided symmetry on this page. The whole thing is just too cool.

Taylor, you also asked me about the story developments at the end of the issue, and I gotta say: whatever this team wants to do is fine by me. Splinter in charge of the Foot Clan is not something I’ve ever seen before, but it makes perfect sense and is exciting emotional territory to explore. Mikey’s exit might have seemed abrupt, but I’ll admit to being totally on his side in this one – haven’t they spend their whole adult (teenage) lives fighting these guys? Actually, this is a banner issue for Michelangelo, who gets to land more than his fair share of blows against Shredder. My affections for the party dude have never been greater, so if he’s not cool with the latest development, well, I owe it to him to find out why. Y’know: in the the next issue.