Spencer: Does the man make Batman, or does Batman make the man? That seems to be the question at the heart of Scott Snyder and Greg Capullo’s “Superheavy” arc, and with Bruce Wayne no longer under the cowl, it’s an especially timely one. Geri Powers, Jim Gordon, Bruce Wayne, and even Duke Thomas all have different ideas of what role Batman (and Robin!) should play and how that role should be carried out, and those conflicting perspectives make Batman 45 a captivating exploration of the function and legacy of the Dark Knight.

Geri Powers makes her stand drastically clear: Batman, or at least this new one, exists to inspire Gotham, and is thus most important as a symbol — the man beneath the mask is interchangeable. Even when speaking to the press, she focuses on Batman as myth, as a force inextricably linked with the identity and creation of Gotham. 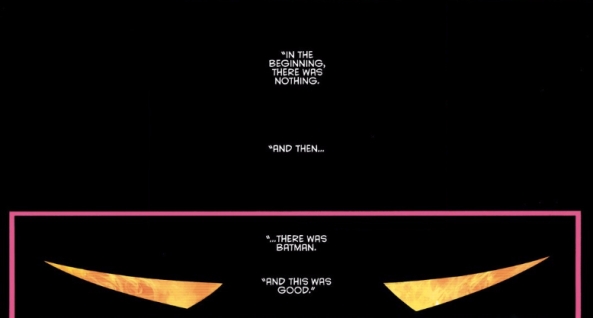 Thus, Powers feels like she has no choice but to fire Gordon when his going rogue becomes public. She doesn’t dislike Gordon or even necessarily disapprove of his actions, but she does view them as a PR nightmare. Her Batman must be loyal to the police and the city and the higher-ups; the lone vigilante act won’t fly anymore, because if Batman is going to be a role model, than he’s going to promote values that she and the rest of the city’s leaders approve. In their world, anyone who can meet that criteria can be Batman.

Yet, that’s far from this issue’s only take on Batman. Even in the same scene I posted above, as Powers is busy preaching the Gospel of Batman, Capullo reminds us of the man behind the myth by literally taking us behind the mask and showing us the battle through Gordon’s eyes. This is a recurring motif throughout the issue, always reminding us that Gordon is bringing his own perspective to the role of Batman.

But is it Gordon’s perspective that makes him a successful Batman, or the “power” of the mantle that helps Gordon succeed? Snyder remains fascinatingly cagey with his answers. As the issue opens, Batman is trapped in an industrial furnace, with seemingly no way out. To psyche himself up, Gordon first reminds himself that he’s Batman and that means he can do amazing things, but then he recites “Semper Fi,” recalling his training as a Marine. Which one gives him the power to escape? It’s unclear.

That uncertainty continues into the next scene, as Gordon attacks Bloom’s henchmen and quickly finds himself overwhelmed. Gordon’s still used to having back-up as a cop, or even being able to count on Batman rescuing him, but that doesn’t fly when he’s Batman. Thankfully, Gordon isn’t as alone as he thinks; Gutierrez is able to direct the Bat-Mecha to rescue him. The support system of Gutierrez and Julia Pennyworth was specifically put together by Geri Powers, so is this an example of their bringing something new to Batman, or is it simply the newest iteration of Batman’s many sidekicks and assistants over the years?

The one thing that’s certain is that the idea of Batman is without a doubt evolving, even if we can’t pinpoint whether it’s the new blood fueling that evolution, or if the concept of Batman always had the potential to become this. Duke Thomas would likely argue that it’s a mixture of both.

When Bruce was Batman, Robin always served as a light to his darkness. It only makes sense, then, that when Batman becomes a tool of the police, Robin becomes a grassroots movement aiming to help individuals on a street level. The perspectives of Gordon and Duke are front and center in this new incarnation of the dynamic duo, yet both men are heavily influenced and inspired by the men who served as Batman and Robin before them and the roles and relationships they originally established.

If anything, I suppose this all speaks to Batman’s ability — both in-universe and out — to evolve with the times. It’s a concept Snyder’s always seemed fascinated with, and in Batman 45 the best exploration actually comes from that rascally ol’ bearded amnesiac, Bruce Wayne.

Bruce is still watching over orphaned children in the Narrows, but is becoming frustrated by his inability to help at a larger level — in this case, he can’t convince the city to come clear out the rest of the refuse left over from Joker’s attack, refuse which could literally pose a threat to these kids if it fell into the wrong hands. Bruce’s solution is absolutely ingenious.

Bruce has taken bad experiences and turned them into good ones. That was perhaps always Batman’s goal — making his parents’ sacrifice worthwhile — but Bruce now approaches it in a more emotionally healthy manner. Moreover, Bruce is literally taking Batman’s old victory trophies and turning them into trophies of Gotham’s resiliency; if that isn’t a metaphor for how new Bruce’s priorities differ from the old one’s, than nothing is. Gordon’s vigilante tactics may be necessary to take down monsters like Mr. Bloom, but Bruce — and perhaps even Powers, with her desire to create a symbol for Gotham — is playing a longer game, attempting to address problems and change Gotham at a level Batman never could by simply punching out sociopaths.

Ultimately, we still don’t know exactly how much Batman is going to change or even exactly what Snyder thinks he should stand for in this brave new world, but speculating — and seeing the various takes on the caped crusader Snyder and Capullo establish throughout the issue — is absolutely thrilling nonetheless. Michael, what’s your take on all these new, varied perspectives on Batman? Any thought on the gorgeous art of Capullo, Danny Miki, and FCO Plascencia? And oh my god, Mr. Bloom: what a creepy, creepy dude. Has your stomach settled yet?

Michael: Scott Snyder does indeed love commenting on the nature and meaning of Batman in a way, that for my money, never gets old. One of the unexpected pleasures of writing about “Superheavy” is getting to dive into the hows and whys of Batman lore with my fellow Retconners such as Spencer. The recurring theme of the power of Batman “as an idea” is something that we have seen over and over again in recent Batman comics, TV shows and films. Geri Powers believes in the power of that symbol, and given her experience as a soldier and businesswoman she is trying to share that power with the people of Gotham. And try as I might, I don’t think I can ever neglect to mention Grant Morrison’s Batman epic when I’m talking about Batman mythology. Geri Powers believes that the idea of Batman is sort of a basic right of the people. Reading Powers’ philosophy, one quote kept popping in my head: “If Batman didn’t exist, well…I guess we’d just have to invent him.” A quick google search of the quote lead me back to Bat-god Grant Morrison – a line of dialogue that Bruce Wayne spoke to the public about Batman Incorporated. Though not necessarily the same idea, Powers’ civil servant “Batman for the people” is definitely reminiscent of the short-lived corporate Caped Crusader. Snyder gives Powers the important (and 100% accurate) line of “In the beginning there was nothing. And then there was Batman. And this was good.” One of the most amazing things about Batman – inside the comics and out – is that we can all agree that the idea of Batman is something that will always be. Even if that means we have to create a new Batman.

We at Retcon Punch are nothing if not students of story; purveyors of pop culture. I think that highly intelligent creators like Snyder take extra care for readers like us when writing. Since they began working on Batman, Snyder and Capullo have prided themselves on upping the ante and not repeating themselves. When Geri Powers was introduced in the beginning of “Superheavy,” I was positive that she would end up being a bad guy (see also: Lincoln March.) Having Powers start her conversation with Jim by joking about being “the villain of the story” immediately proved her innocence in my book. This isn’t a story about evil corporate fat cats (at least, not yet); it’s a story about the interpretation of the myth and meaning of Batman.

No doubt Mr. Bloom is creeptastic – by my count he murdered at least a dozen people with his hook fingers within a minute. And as unsettling as that is, I honestly found the scene where Bruce repurposed the trophies used in “Endgame” into a playground just as upsetting. Spencer, I frickin’ love your dissection of this move by bearded Bruce and I can even agree with it. It’s true: the only power and meaning that symbols have are those that we ascribe to them. But for many citizens of Gotham – including the kids who were trying to bury these objects (and me) – these images already have extremely powerful and terrifying meanings. The T. Rex trophy is a perfect example of the mutability of a symbol’s meaning: from robotic dinosaur, to a piece a memorabilia to Joker’s desecration of the Batman myth. With Gotham still reeling from “Endgame” it’s immediately unsettling, but I can see that fading with time. The giant Joker card on the other hand? Nuh-uh. No matter how strong Gotham City is in the face of madness and terror, they will never embrace that card as anything but a symbol of evil. Snyder himself added another layer of meaning to that card by making it the linchpin of the events of “Death of the Family.” Like “The Laughing Fish,” a public display of a Joker card is nothing more than an open invitation for Joker to return and run amok. But silly bearded Bruce doesn’t know that — he’s still a newborn.

God this issue is thick with ideas, and as much as I want to go about symbols and meaning I should take a look at the artwork per Spencer’s request. First things first: the cover. I don’t think I was completely on board with the mech batsuit until I laid eyes on this cover. Leaning back with his arms outstretched, Gordon is striking an odd pose that seems like a dance move. Capullo’s addition of the bat-gun and the candy cigarette in mouth turn the choreography into a marksman taking aim. The behemoth, action-ready mech batsuit in the background makes the image read like a Hulk team-up. I love this batsuit so much more now that it turns Jim into a two-in-one Dynamic Duo.

I’m still loving how much of “Zero Year” is carrying over into the artwork of this book.  FCO’s drastic ultraviolet pinks, greens and yellows give Gotham the feel of a city showing its age and decay like graffiti by daylight. When the sun goes down, these same colors make Batman’s nighttime activities similar to the rapid electric beat of a rave. It’s like a successful version of Joel Schumacher’s Gotham. Also, how many times did Gordon get stabbed exactly? I feel like he lost a goddamn gallon of blood. How exactly did he turn around and suit up for that press conference? Semper Fi indeed. 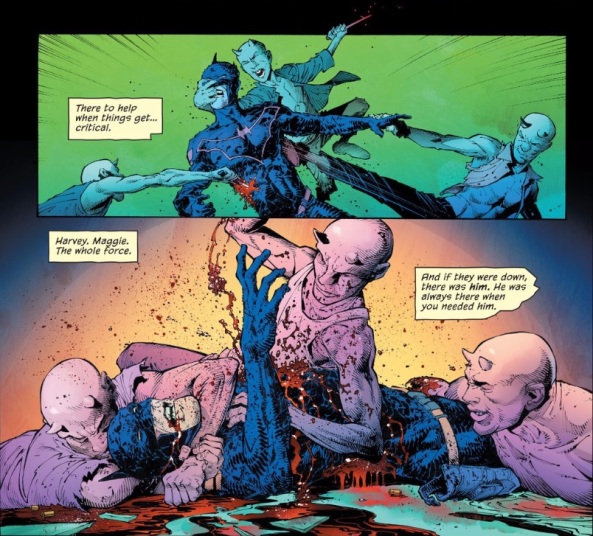