Ryan M.: The idea that genetics are destiny can be disturbing. We all want to believe, especially when we’re teenagers, that we can control our fates. That the choices of our parents need not define us, that our lives are more than what we were born to.  For me, that meant looking at my Mom’s gray hair at 30, my Dad’s loud laugh or an off-hand racist comment by a relative and saying to myself “that’s not going to be me.” I got to thirty without any silver but can’t control my guffaws, so two out of three isn’t bad. In Gotham Academy 11, Olive is facing a much darker familial legacy and no one seems confident that she will escape it.

The first scene of the issue establishes Olive’s plan to head into the city under the guise of a tennis tournament to find out more about the return of Calamity. Professor Strange proves to be fairly ineffectual with his half-hearted warnings of danger and vague acceptance of Olive’s choice to get closer to her mother’s secrets. He also chooses to have their meeting next to the hearth. When I first saw the page, I thought it was some kind of immersion therapy, set to trigger Olive’s visions, but his bland assurances that he will help Olive “navigate the difficult changes” seem like generic guidance counselor speak. It’s no surprise that she brushes off his advice and continues with her plan to get real answers. The visions that Olive has been seeing are horrifying, and we get a reminder of that in the second and third panel of the issue.  Olive has her hand in front her face, shielding herself from the memory. Olive is not okay.

Olive’s motives and feelings about the issue’s mission are drawn in contrast to Maps’ enthusiasm. For Maps this is an opportunity to play as hero, complete with mask and elaborate diagrams of the city. Maps’ exuberance is distinctly childlike. She wants to help her friend, but more than that, she is looking for adventure. The notations on her “Master Document” look like they may have been written in crayon and have places to hide “’til the heat is off.” The brief scene in the alley also provides quite a bit of exposition without feeling static.

Maps provides a levity to the middle of the issue and lets the reader take a break before having to deal with the implications of Olive’s family history. Maps and Olive are experiencing parallel stories each in a different genre. Maps is playing at superheroes and even gets to meet one in Red Robin, whose first appearance gets the hero treatment. His cape is streaming behind him, his jaw is square, and the low angle of the shot makes him look intimidating and strong. Maps’ smiling reacting to Red Robin calling her “one of us” is charming and makes her look even younger. Maps’ encounter with Red Robin even gets us further information on the Calamity mystery. He tells the story of Batman and Robin’s encounter with Calamity. The visuals immediately change, each panel consumed with fire and an almost watercolor fuzziness. It’s a typical hero narrative, but it reveals Batman and Robin’s long ago concern that Olive may grow to have the same proclivities as her mother. We even see a young Olive in this version of the story, framed between two of her mother’s prison bars, giving the impression that she is the one locked away. 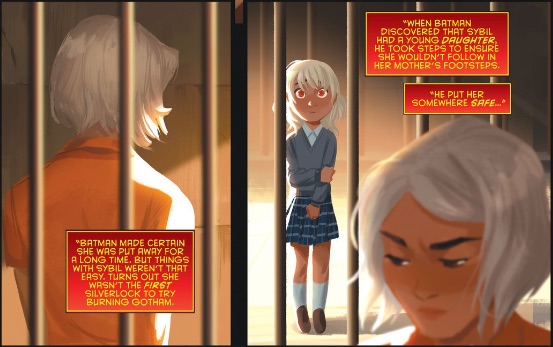 The scene operates outside of a magic realm. There is an “unmasking” panel where the demonic woman is revealed to be Sybil Silverlocke in a robe and wig. This does not line up with the creepy creature that has been approaching Olive. This makes sense because, while Maps is getting the story from the hero perspective, Olive is making the same discovery in a more gothic style. She is looking at generations of her own family, each with the same dark history. We see the faces of her ancestors, mostly in angry mugshots as Olive reveals that each assumed the mantle of “Calamity” and were driven mad. Just as Olive questions whether this is her destiny, she comes face to face with the fire-starting demon that has haunted her family. It was interesting to have the same revelations follow one another directly and not feel redundant. This is a very personal discovery for Olive; it is far more affecting to have her look into the eyes of her predecessors and question whether she will become them than it would be for her to hear from someone Bat-related that she was placed in Gotham Academy to be watched.

Taylor, how do you feel about the use of Red Robin in this issue? Do you look forward to the gang heading out to Arkham?

Taylor: I enjoyed seeing Red Robin in this issue because it reminds me that Gotham Academy is still a part of the DC – and more specifically Batman – Universe. Previously every issue of this series has been set on the grounds of Gotham Academy. Save for a couple of cameo appearances by well known Batman characters, the series set itself apart from the Batman universe with the exception of passing references to outside events. Seeing Red Robin in action, along with his story about Batman and Dick Grayson, reminded me that Gotham Academy not only is part of this universe, but very much entwined in it. This is a treat for me, for while I knew this all along, I never really saw the two actually colliding before. Now they are and I’m so excited to see what this means for later issues in the series.

Red Robin’s appearance isn’t the only major change in this issue that connects Gotham Academy with its larger universe. The action of this story moves away from the Academy and into the city of Gotham itself. This change of local is interesting if for no other reason than it’s the first time we’ve seen our heroes outside of their school confines. As such, it’s interesting to see how the world of Gotham is portrayed by the creative team and just how the girls interact with it. Luckily for me, they pull no punches in showing us just what type of world this version of Gotham is. 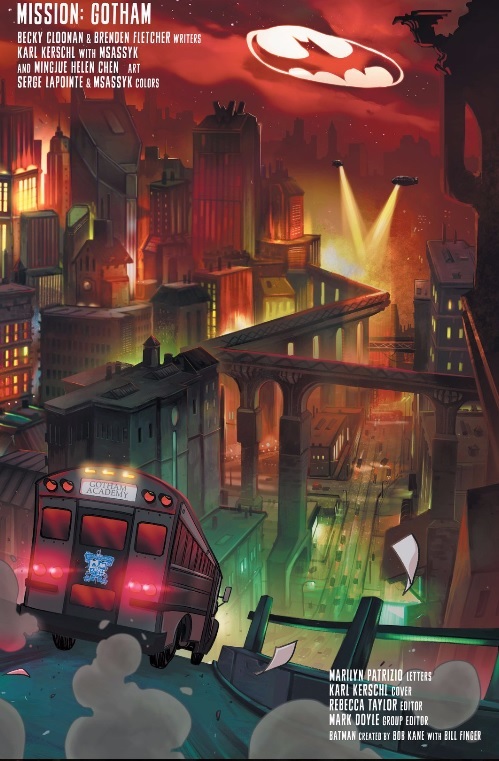 A couple things stand out to me about what this introductory image says about Gotham. First, the sky. It’s ominous and painted almost a blood red. More, the Bat-Signal is prominently displayed. This tells me that Gotham is a city prone to violence not only because of what the red-colored sky insinuates, but because the Batman is apparently needed RIGHT NOW.  Basically this Gotham, as almost all Gotham’s are, is sunken in turmoil and crime.

More than telling me directly about the city, I love how this image references the Batman Animated Series that virtually every millennial watched growing up. Aside from the red sky, which mimics the opening of the TV show, in this distance we see police blimps floating. These blimps are synonymous with the animated series and I find it hard to believe that their inclusion here is simply a coincidence. Lastly, the Art Deco architecture of the buildings reminds me of the series. What this does for me is tell me exactly what type of setting we’re dealing with here. Like the animated series, the tone of this issue is made dark by the setting, but kept buoyant by the cast and the action.

These things alone make this issue fun for me. However, I also appreciate that this issue has some depth to it is as well. This depth comes courtesy of Olive’s past. When Olive is in the hall of records, she finds her family’s file and what she finds does not speak optimistically about what her future may hold.

Basically all of Olive’s extended family have tried to burn Gotham down at one point or another. As you mentioned Ryan, at one point or another everyone has to confront who they are through the lens of who their family is. For most people that means thinking about the type of person you will become. For Olive, it means confronting the possibility that she’ll burn down an entire city. While the stakes are obviously higher for Olive, I love how this is basically the same coming of age story I’ve seen told over and over. But this isn’t a bad thing. After all, Gotham Academy is a story about adolescents and naturally it should ultimately focus on their growth as young adults. Because everyone struggles to figure out who they are, Gotham Academy, and this issue in particular, resonate with me. This isn’t just a story about a girl with a criminal mother. It’s a story about growing up.