Michael: How do you value one life over another? Do the needs of the many outweigh the needs of the few? Green Lantern: Lost Army 5 shows us the burdens of being the person in charge who has to make this tough decisions. It also does something that is equally difficult: making John Stewart interesting.

Green Lantern: Lost Army 5 is a prison break story where intergalactic space cops have to escape from a space jail that is not their own. John Stewart continues to take charge while trusting in his fellow corps members. The GLs retrieve their captured rings from the pirates– except Kilowog, who seems to be the only GL who has to use the lightsmiths’ power for some reason. John frees the other “lightsmiths” and they work side by side as they revolt against their pirate captors. Much to John’s surprise, future corps enemies/current corps allies Krona and Relic come to their rescue. After they escape Relic helps the lanterns track down Mogo, who seems to be enduring quite the whooping from the old universe lightsmiths. 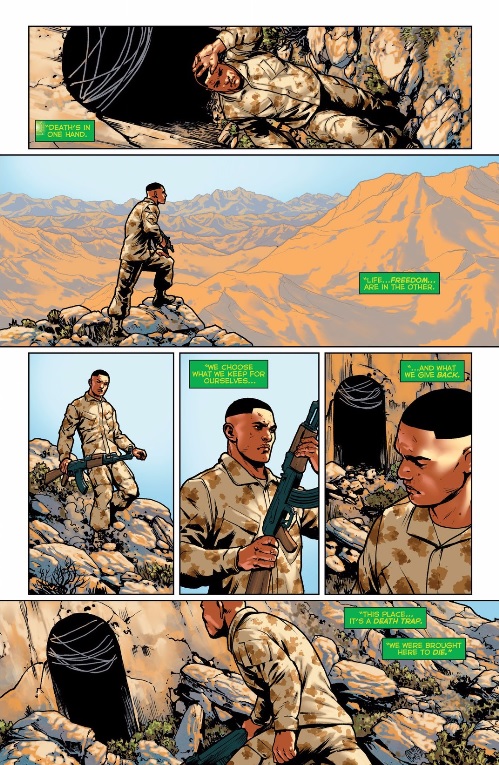 Compared to the other Earth Green Lanterns, I often find John Stewart to be a little boring – which is unfortunate because superhero comics always need more diversity. Hal is the devil-may-care cool guy, Kyle is the hopeful dreamer, Guy is the unapologetic loudmouth and Simon Baz? He’s still too new so I’ll just say he’s got a cool costume. With all of those big personalities, John Stewart’s role is basically the straight man – which is a thankless job that is mostly overlooked. Green Lantern books never let us forget that before John was a Lantern he was a marine. In terms of quality, “John Stewart marine flashback stories” are typically a coin toss. In Green Lantern: Lost Army 5, Cullen Bunn uses this narrative device very economically; the message: John is not the kind of guy who just saves his own ass. Jesus Saiz is similarly minimalist about this flashback scene. In the course of three pages Saiz shows us the severity of John Stewart as he kills an enemy to survive as well as John’s compassion. I think that many mainstream comics are used to spoon-feeding readers their intended message, but here Saiz and Bunn merely provide the setup for the obvious conclusion. We don’t need to see triumphant John Stewart parading out of that cave, rescuing his fellow soldiers; seeing him make the decision to go back is enough. 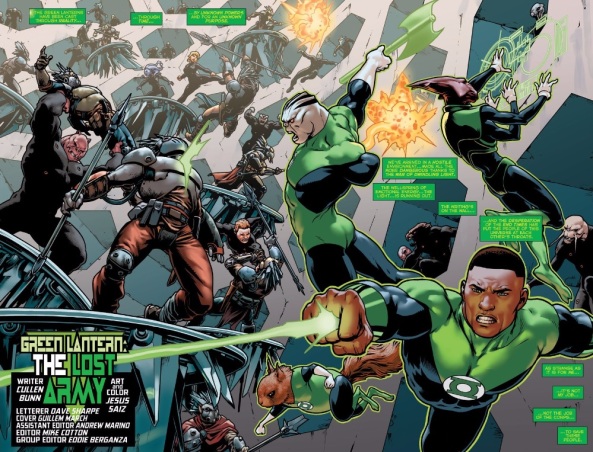 One of the beautiful things about comic book continuity is how concepts and plots can grow on you over time. I found Robert Venditti’s “Lights Out” storyline about the “dwindling emotional spectrum reservoir” to be way too preachy. Conversely, I think that Bunn is utilizing this concept to influence the Lanterns’ actions to a greater effect in Green Lantern: Lost Army. The Green Lantern Corps is stranded in the past – specifically in the doomed universe that came before the Lanterns’. In the past few issues we’ve seen Guy and John argue about whether or not they should warn/help the inhabitants of the old universe, space-time consequences be damned. That right there is one of the big quandaries that superheroes face – you can’t save everyone. That’s one of my favorite characteristics of Superman: if he fails to save just one person, he feels that loss. John embraces his military roots and remains steadfast in doing whatever it takes to get his people home safely. He puts the lives of the Corps ahead of the lives of this old universe – “It’s not my job… not the job of the Corps… to save these people.” That’s the kind of tough call that the commanding officer has to make. Despite this, Bunn and Saiz still want to emphasize John’s compassion by depicting him free some of the other doomed prisoners. You could argue that it’s an empty gesture, since their universe will soon die, but it’s still heroic. Plus it’s a good strategic move to free as many of the prisoners as possible to ensure a successful escape.

Patrick! How did this issue treat you? Are you “falling in line” with John’s tough decisions? Sadly there’s only one issue left for this series. How do you think things are going to play out for Relic and Krona? And is it just me, or did lightsmith Kilowog remind you of Kingdom Come Alan Scott?

Patrick: He does kind of have that fat-Lex-Luthor-in-his-power-suit look to him, doesn’t he? It is kind of a weird choice to make Kilowog the sole bearer of ancient lightsmith weaponry, but I suppose it is a grand Green Lantern tradition at this point to arm our heroes with new weapons that are basically indistinguishable from their old weapons. You can tell me that different emotions power Guys rings (he got them both back!) or that the UI “isn’t all the different from [their old] rings” but that doesn’t mean anything to a reader that’s just watching the pretty colors streak across the page.

Actually, hold on that thought a second. Bunn makes a point to bring up the emotional spectrum at a couple different points in the issue, even once drawing on the animosity between Corps. John leans back against a Yellow Lightsmith and says, rather crassly: 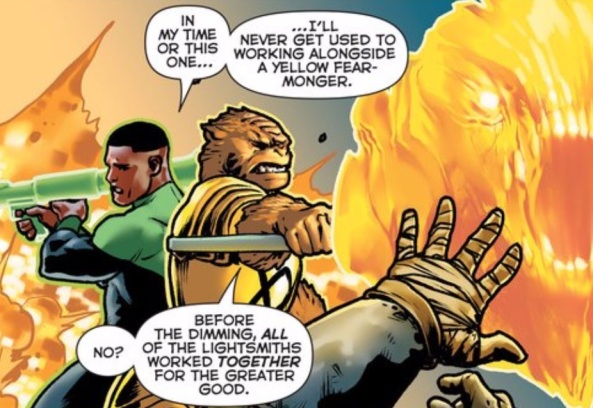 First of all, come on man, save the trash-talk until after you’re out of harm’s way. But more importantly, what the hell is John talking about? His best friend on this mission is half Red Lantern. Red! Y’know, the guys who vomit hot plasma and only want to kill shit. Plus, he’d gone to war with Hal wielding a Yellow Ring by his side. So this is already kind of a weird objection.

But then you’ve also got to take a look at what’s really motivating our Lanterns, and not just what’s powering their rings. Jruk is a pretty standout example of a Lantern who is not merely another willful warrior, but an angry-ass motherfucker. But he’s still part of Stewart’s team because his ring is the same color. If anything, Bunn seems to be intentionally highlighting the similarities between all the soldiers that weaponize emotions. There’s a very weird moment about halfway through the issue when Xrill-Vrek confesses to Two-Six that he’s overwhelmed with sadness and hopelessness, and while “sadness” isn’t one of the colors of the spectrum, “Hope” is. And Xrill-Vrek making a point about lacking that emotion… I don’t know! I don’t know what to make of any of it, other than to say that it keeps coming up, but not mattering.

Maybe that’s what Bunn and Saiz are driving at. For as much as we want to pretend that there are specific emotional forces driving these powers, maybe it’s all one generic “emotional reservoir.” If that’s all it is, and the point of Green Lanterns stories is to watch some space cops shoot cool colors from their rings, then maybe that conflation of emotions is just what the franchise needs.